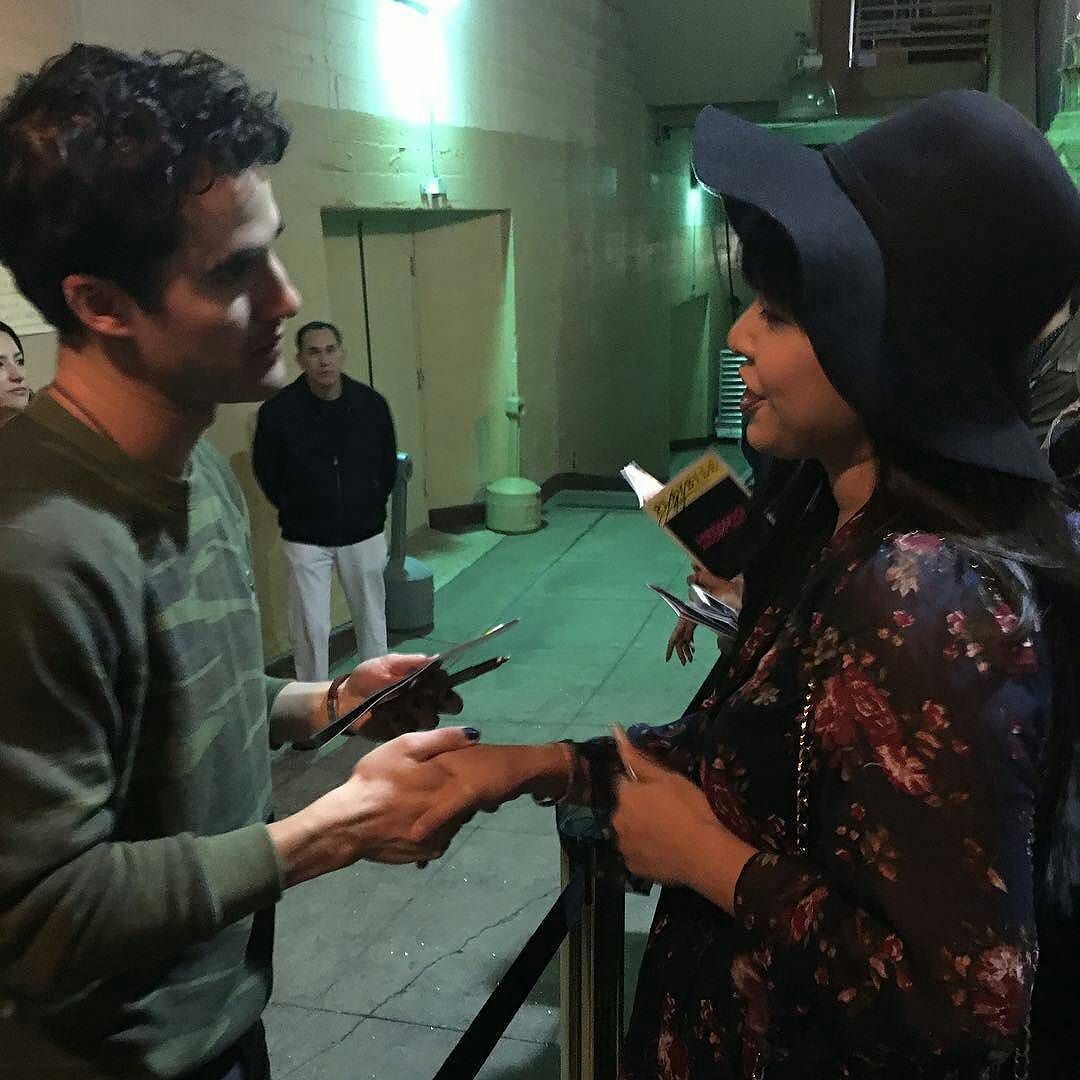 When you’re caught mid talking to #darrencriss, which by the way this is my third time meeting him tonight and I still think he is one of the classiest and humblest people in Hollywood. I appreciated that rather than take selfies with everyone, he took the time to actually have a conversation with everyone who waited for him and was super personable! Truly a stand up guy http://ift.tt/2g52KbF
via DarrenCrissArmy

Note:  I appreciate this so much about Darren.  He used to call himself an old-fashioned guy, because he preferred face-to-face interaction above social media, but I call it just valuing making a meaningful connection between people, sharing a moment together, emotionally (with his efforts to engage them in conversation, to find a connection through language and to connect with eye contact and a smile), and also physically, since Darren seems to understand the power of simple touches (how much it means to his fans, to have his hand on their shoulders/arms, a handshake, a warm hug).   I personally feel this makes Darren stand out as unique, compared to other celebrities, in how he really does try to connect with his fans as people, as opposed to how other celebrities keep a distance from fans.


This is an account by a fan of her stage door experience.  I'm truly sorry that parent was not respecting the good will that the other fans tried to uphold in honor of how Darren conducts himself so wonderfully with others.   I' m sorry for her heart  condition; that must be such a difficult struggle for her, as well as for her loss of her father.  And I'm sorry that parent at the stage door upset her so much.  I wanted to include her story to illustrate how much Darren really tried to comfort her, to bring her back to a place of positivity, knowing how upset she was, and how he also understood that physical touch would help bring her back to a place of positivity.   I also love the concern he had for her, because she seemed tired and had to drive back home.

There were people going back stage and we were informed that he would be taking about an hour and a half with them, so sit tight. Which we did. The nice thing was that people seemed to be very polite about the whole line thing. They fell in step behind their fellow man, and we were all being very patient.

Fast forward to when, about 11:30 or so, we are finally told Darren would be coming out soon.

So, she cut in line and got her way. I couldn’t even look up when the lady left because I just knew what the expression on her face was going to be. But the second they were out of earshot, Darren jumps over to me and says that he’s sorry he kind of called me out in front of all those people, but he wanted to get that woman out of there quick if she was going to cause problems.

And then, I was happy again.

I watch him sign autographs and shake hands, give hugs and talk into cameras. He takes about two minutes average with each individual person, which is sweet . . . But when he comes up to me, he gets right into my personal space. He rests his forehead against mine, and that’s it. That’s how we talk together for close to five straight minutes. He gives me a hug. And then another. Almost every sentence ends with a hug. I tell him how meeting him was #3 on my bucket list, how I have been waiting five years to meet him, and he says, “And now here we are, sharing this moment.”

Darren Criss said he wanted to take a selfie with me.

I had yawned when he first approached, and I apologized telling him that I had just finished working and then drove four hours to see the performance. He asked me if I was driving back tonight, and I said I was. He asked me if I couldn’t rent a room or nap in my car, and I told him, no. That I had people who relied on me. He said he understood, that that was a good thing. I know we talked about more than just that, but, to be honest, all I remember are his eyes, because, let’s face it, he has amazing eyes. I have always thought that talking while staring into someone’s eyes is one of the most intimate things in the world. I write about it a lot. Now, I have a frame of reference.

Before he moved on, I got the chance to tell him a little bit about the issue with my heart . . . But he said that from what he could see, I had a beautiful heart.

Now, I know he was being nice, but he might never know how much that comment meant. I try not to think about my heart too much. I really just want it to do it’s job as long as possible without me worrying about it. But the reality is that when my father passed, the last few years of his life were atrocious . . . I think about my father, and I see my potential future, and it terrifies me. Sometimes I even hate my heart for turning on me this way, but that’s not really the case. Life happens. It is what it is.

So, yeah. Him saying that was a big deal to me.

I had seen her aunt's tweet before, of how sweet Darren was with her niece, who was wearing a patch over her eye.


qbanpete79: So this happened after seeing #HedwigandtheAngryInch last night. I have to say #DarrenCriss is one of the nicest and most gracious actors I’ve ever met at my many stage door encounters. And, man the work and energy he put into the show was awesome.
via dailydarrennews

I'm posting a few fan messages that I missed.  With all the events that have been happening, it warms my heart to know that there are good souls out there like Darren who practice kindness to others.


Stage door at the Hollywood Pantages (Hedwig and the Angry Inch):

@madeinhoIIywood again, i appreciate you oh so very much you deserve everything. my heart is so happy @DarrenCriss
November 20, 2016 ‏
@StageName@Come
@DarrenCriss was a nice guy. I asked him about getting an agent and he offered quick advice. Now go get some rest, and rest that voice.
11-22-16 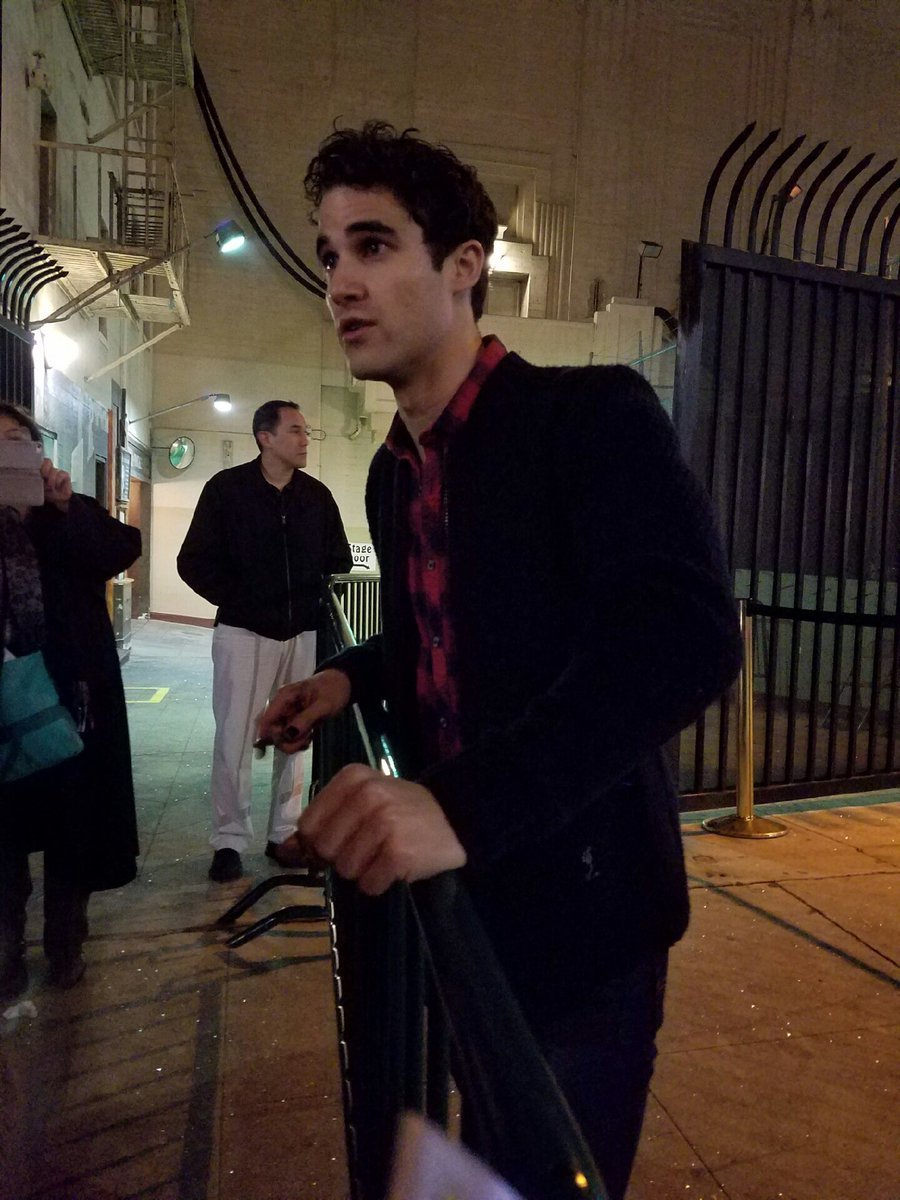 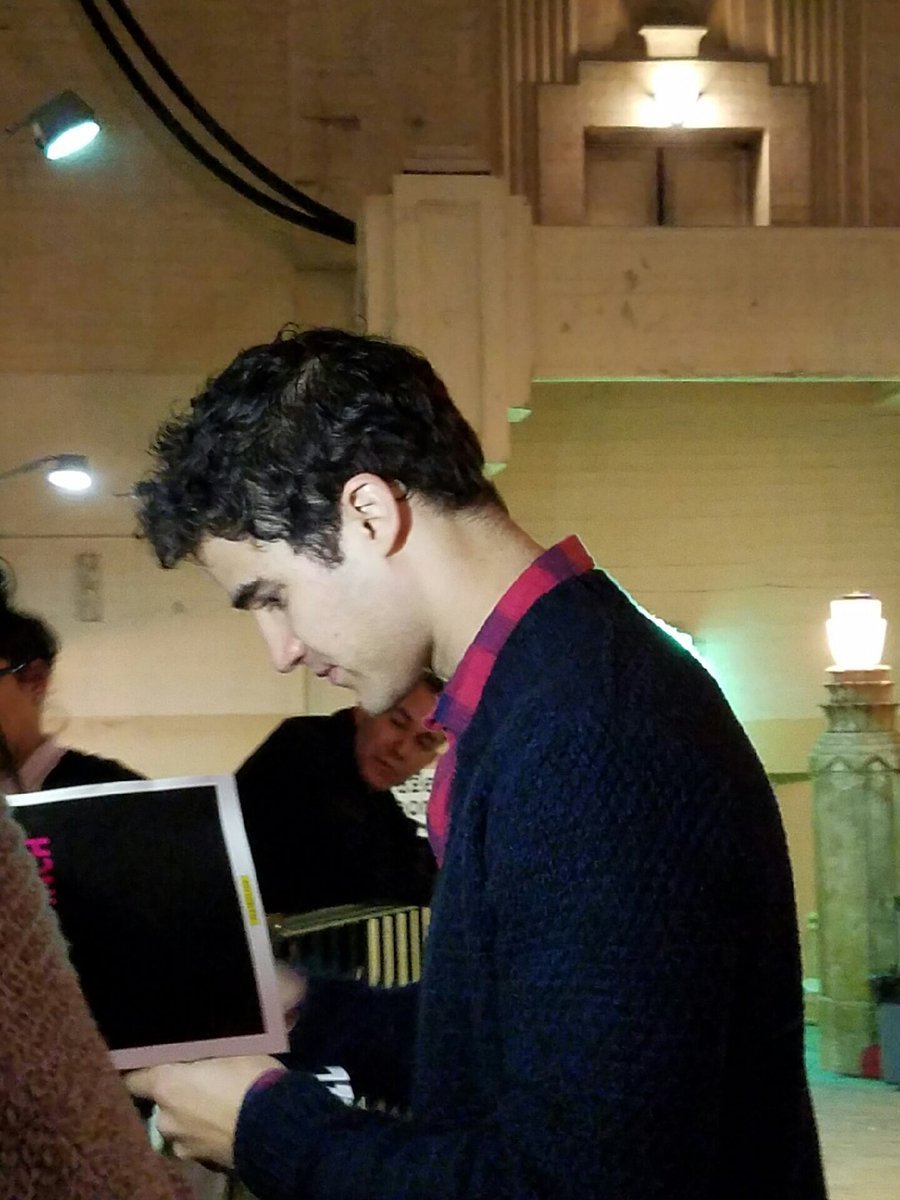 @jbgirl97     He's honestly the sweetest person ever. Actually take time to talk to everyone. AND HE SIGNED MY PHONE CASE!!! @DarrenCriss loml
11-22-16 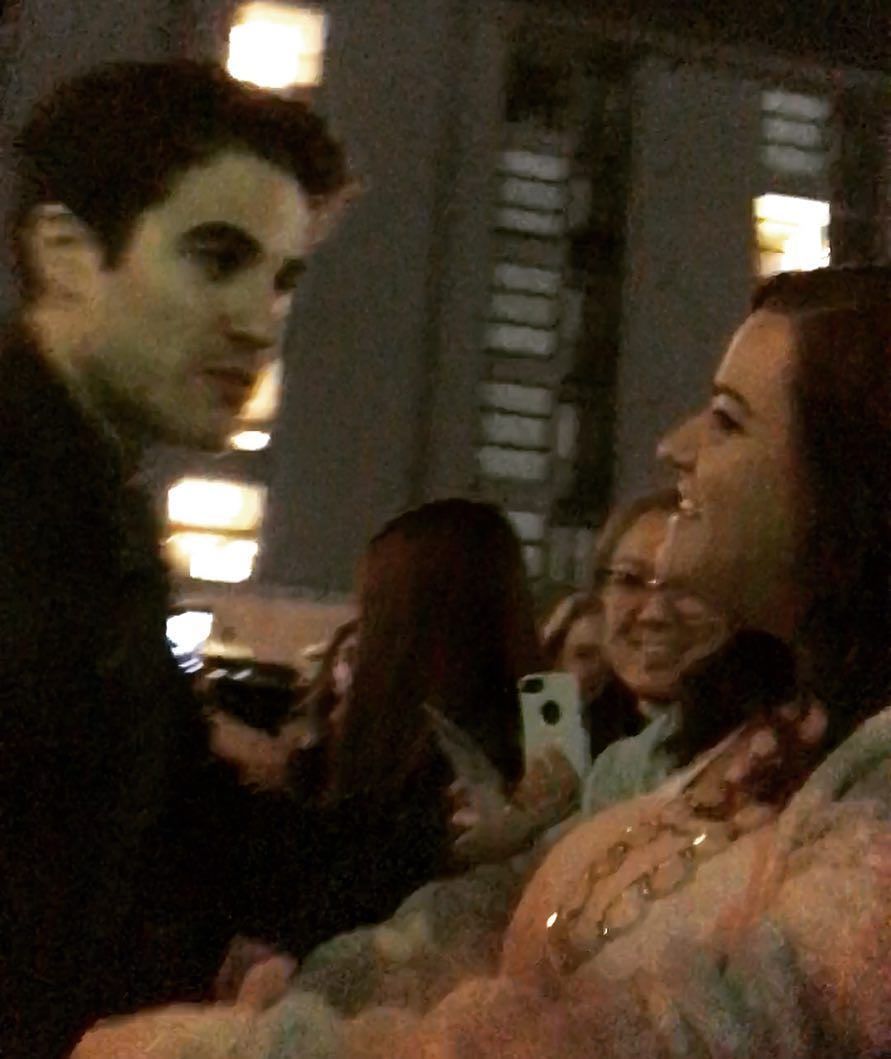 itstracyerin    No selfies equals more time to talk and @darrencriss was so sweet to have real conversations with everyone and actually take the time to get to know us.  So sweet.  #hedwigandtheangryinch #theatrenerd 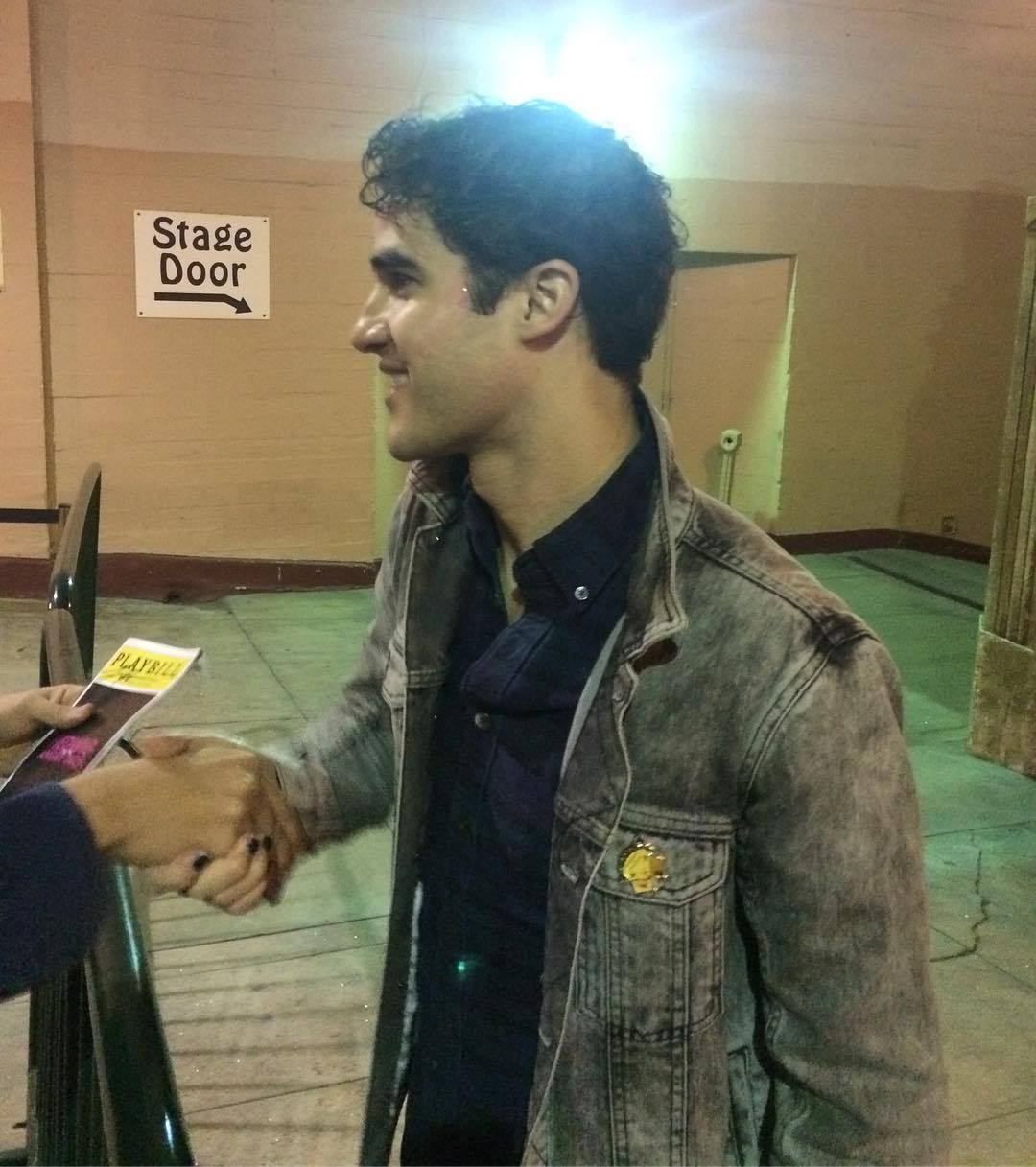 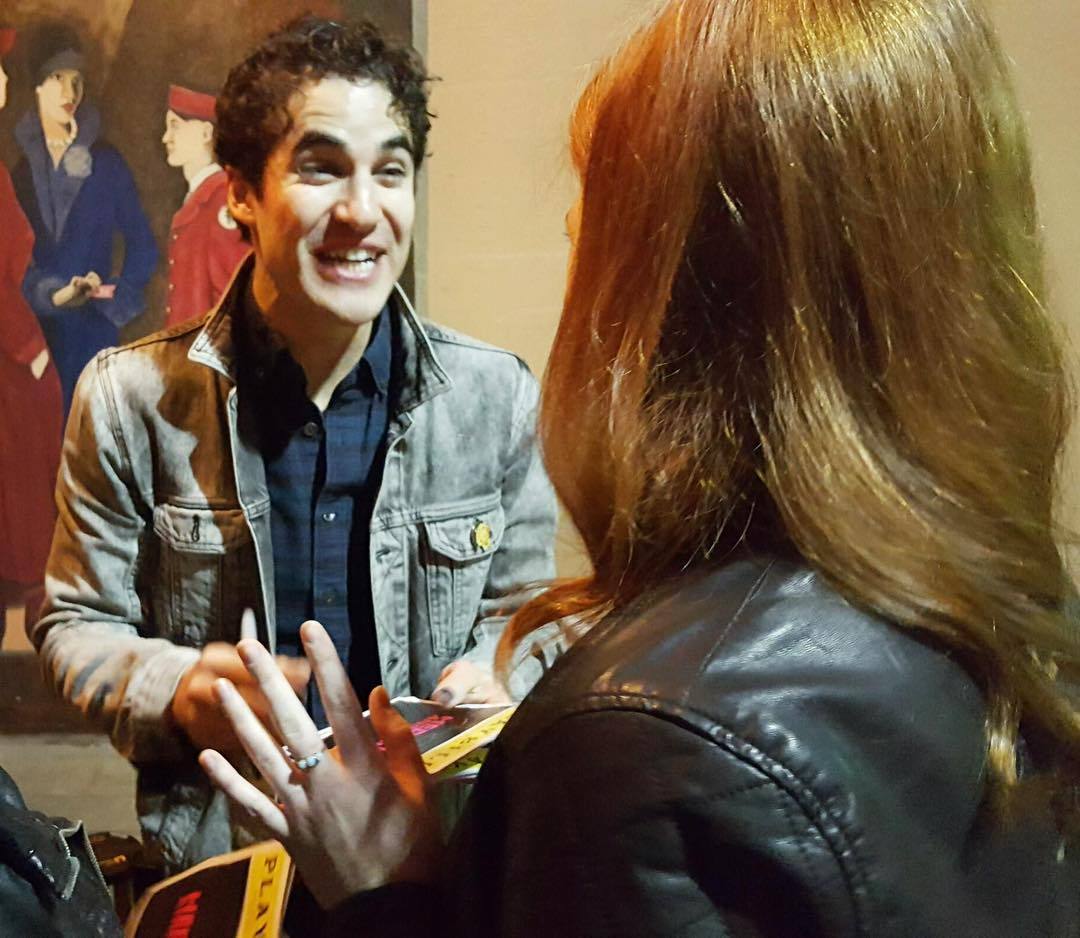 dev_mo   @darrencriss once said that he hoped "Coolest Girl" from A Very Potter Sequel would become the new "Part of Your World" of auditions.  This was the moment I told him I've sung it at multiple auditions, he was filled with such genuine joy, told me to "shut the fuck up!!" (excitedly, I promise) and gave me a huge hug.  What a genuinely kind, wonderful human.

This interaction is very sweet.


therealmysterie: I’m still in shock right now. Like, I don’t even know what to say. I’ve been a huge fan of this person since middle school. He’s always been a huge part of my life and I go to see him rock out and be absolutely amazing tonight. I honestly don’t remember a lot of this, I’m so happy I recorded it, even though I didn’t record well. I’m honestly so happy and in complete awe. I love @darrencriss so much. Thank you for everything. (Also I think I got some of my glitter moustache on his jacket when we hugged)
#hedwigandtheangryinch @hedwigonbway #darrencriss {#lgbt #lgbtpride #lesbian #gay #bisexual #biromantic #pansexual #panromantic #transgender #transman #transguy #ftm #transwomen #transgirls #mtf #genderqueer #nonbinary}
November 27, 2016
via dailydarrennews

I had some time, so thought I would post these Hedwig (tour)-related tidbits.

@darrencriss You made a video saying hi to my 5yo kid @ the wkend. Made his day/life! Who knew he could be rendered speechless? Thank you


I wish I knew how to post videos in tweets onto tumblr or here at the forum.

I liked the video in this tweet, because it is impressive how many people were waiting in line to meet Darren after his last show of the Hedwig and the Angry Inch tour in Los Angeles (at the Pantages Theatre) on November 27.   Click on the link within the tweet (below):

I was supposed to have posted this earlier but look @ this crazy pants line of people waiting to see darren after the show today pic.twitter.com/N8M6KZs2DZ

Is there a video for Darren saying hi to the child ?

Jeremy wrote:Is there a video for Darren saying hi to the child ?

I checked her twitter page and she didn't post any video.   I tried looking at dailydarrennews stage door (Hedwig tour) videos for that time that she posted her tweet,  but didn't see any videos with her name.

Re: Fan Experiences During 2016