Well, congrats to Darren for being cast in a big motion picture!!!

That's some talented cast that Darren will be working with (and the director and executive producer have done some very successful films)!

Criss will play Lieutenant Eugene Lindsey and he joins Woody Harrelson, Patrick Wilson, Ed Skrein, Aaron Eckhart, Luke Evans, Mandy Moore, Dennis Quaid, and Nick Jonas in the big-scale Wes Tooke-scripted drama based on a battle considered to be the turning point in the war against Japan in WWII.

Produced by Emmerich’s Centropolis Entertainment and Harald Kloser, with Mark Gordon exec producing, the film will be released on Lionsgate’s Summit Entertainment label on November 8, 2019. Bona Film Group releases it in China.

Starlight Entertainment Group is financing the $100 million budget film, in deals that were brokered during Cannes.

Criss is repped by CAA and Hyphenate Creative Management and Hansen Jacobson.

Following his Emmy-nominated role in The Assassination of Gianni Versace: American Crime Story, Darren Criss is gearing up for his next role in Roland Emmerich’s latest World War II action film Midway. He joins an already announced (and impressive) cast of Mandy Moore (This Is Us), Luke Evans (The Alienist), and Woody Harrelson (Solo: A Star Wars Story). Also on board are Patrick Wilson, Ed Skrein, Aaron Eckhart, Dennis Quaid, and Nick Jonas.

Movie buffs may recognize Emmerich’s name from other action films such as The Day After Tomorrow and Independence Day. He will be directing a script by Wes Tooke, who has written for USA’s original series Colony. Emmerich will be producing the film alongside Harald Kloser and Yu Dong.

Criss was recently nominated for an Emmy for his role as serial killer Andrew Cunanan in Ryan Murphy’s The Assassination of Gianni Versace: American Crime Story. The award show will be taking place next week and Criss is a favorite to take home the win. Prior to Versace, Criss’ most notable role was that of playing Blaine on Glee, his first partnership with Murphy, a character that was meant to be a guest star but ended up becoming one of the series’ most vital characters. From there he went on to stun critics on Broadway’s Hedwig and the Angry Inch before returning to TV to once again team up with Murphy for a couple episodes of American Horror Story: Hotel. He also founded the musical theater-inspired festival ElsieFest, which just announced its 2018 lineup.
What do you think about Midway? Are you excited to see Criss on screen with such a great cast?

Be sure to catch Criss at the Emmy Awards on Monday, September 17th!


And some more articles via Lilikoiluv's tumblr:

The filmmaker [Roland Emmerich] behind massive hits like “Independence Day" and “The Patriot” has locked in a filming location for a remake of the 1976 movie “Midway," starring Charlton Heston and Henry Fonda, about the decisive 1942 naval battle that became a turning point for U.S. forces in the war in the Pacific.

After scouting filming locations around Pearl Harbor, German director Roland Emmerich settled on Oahu, and will begin filming the $100-million blockbuster next month at Joint Base Pearl Harbor-Hickam. . .

Navy officials have emphasized that Emmerich and crew, a team that includes Mark Gordon, who assisted with the production of “Saving Private Ryan [as well as Steve Jobs and The Day After Tomorrow],” “are dead-set on making sure it’s a historically accurate [film],” the Star-Advertiser reported. Last month, a call went out for local military members and their families to serve as extras in the film, a request that received almost 1,500 responses.

Knowing when and where the enemy planned to attack in June 1942 allowed Adm. Nimitz to dispatch the carriers Enterprise, Hornet and Yorktown to ambush the unsuspecting Japanese navy. Aircraft from the three U.S. ships would wind up sinking four of Japan’s lead carriers, a devastating blow that decimated Japanese dominance at sea and allowed U.S. forces to go on the offensive in the Pacific.

The Yorktown was damaged in the Battle of the Coral Sea and limped into Pearl Harbor only eight days before Midway. But with battle imminent, she was quickly patched up and prepared for a fight after 1,400 shipyard workers spent 72 hours readying the carrier, according to the Honolulu Star-Advertiser.

“There are few moments in American history in which the course of events tipped so suddenly and so dramatically as at the Battle of Midway,” author Craig Symonds wrote in his book, “The Battle of Midway.” “At dawn of June 4, 1942, a rampaging Japanese navy ruled the Pacific. By sunset, their vaunted carrier force (the Kido Butai) had been sunk and their grip on the Pacific had been loosened forever.” Eugene E. Lindsey, born in Sprague, Washington, 2 July 1905, graduated from the United States Naval Academy in 1927. After duty in Nevada (BB-36) and Saratoga (CV-3) he completed flight training in 1929, and served with a bombing squadron in Lexington (CV-2) and an observation squadron in Maryland (BB-46). From 3 June 1940 he commanded Torpedo Squadron Six (VT-6), which flew Douglas TBD-1 "Devastator" torpedo bombers, in Enterprise (CV-6).

Lindsey was awarded the Distinguished Flying Cross for successful leadership of his squadron in attacks on Kwajalein and Wotje in the Marshalls 1 February 1942.

Lindsey made a bad landing when the Enterprise Air Group returned to the ship on 28 May 1942. The destroyer Monaghan rescued Lindsey and his crew (ARM1c Charles T. Grant, Capt. Thomas E. Schaffer). Lindsey refused to let the injuries he sustained in the crash, however, keep him from leading his squadron into battle. He died in action 4 June 1942 with his rear-seat gunner C.T. Grant, ACRM, in the Battle of Midway, when their Douglas TBD Devastator was shot down by Japanese A6M2 Zero fighters, while attacking the aircraft carrier Kaga. VT-6 lost 10 out of 14 planes. He was posthumously awarded the Navy Cross for his important contribution to this great American victory.

Poppy, you announce that like it's a minor news but it's not ! It's a big project, it deserves the dancing banana smiley

It's a great news he's back in a movie, especially a movie with a big director and a quite impressive cast (Nick Jonas etc.). Besides, we're gonna see him in a WWII story, what a change !

I guess it's the project (or one of the projects) he couldn't talk about.

haha.  Sorry for the lack of celebratory emojis (the lack of does not mean I'm not happy and excited for Darren--I'm just recovering from my "vacation," and have so many things I need to do, so more a reflection of me and being a bit tired right now).

So I edited my previous post and added some emojis celebrating Darren's casting in this big action pic, with a big director and exec. producer!

Guest
Darren in a new movie!

They're filming part of it here on Oahu?!

Spoiler:
Darren's character does not survive?

But Darren in a "blockbuster" movie!

haha, Lilikoiluv!  I think you are showing the proper amount of happy emojis!

Hello Lilikoiluv. It's so cool they will shoot where you live

Btw, Poppy, the subject of the movie must interest you, as you already talked here about the life of your Japanese parents during WWII.

The issue of how Japan and the U.S. were at odds with each other during WWII was always something that makes me and many Japanese-Americans uncomfortable.  It's part of history.  But I always wanted to hide under my desk at school whenever we covered WWII, especially during discussions of Japan's attack of Pearl Harbor.

So anything related to the war between Japan and the U.S. during WWII still gives me a visceral feeling of being uncomfortable.  My uncles and my step-father by the way, while they and their families were imprisoned in the detention centers in the U.S., chose to enlist in the U.S. military to fight Japan's armed forces as a show of loyalty to the U.S.

haha.  Sorry, so not my first choice of a film that I would want to watch, but I'm still very happy for Darren that he is cast in the film.

Oops, I wasn't aware of that

Hope you will enjoy the movie despite that.

haha.  No apologies necessary!  The was no way you would know what my thoughts were on this issue.  There were only 2 Japanese-American kids in my entire elementary school.  The other kids would literally turn around and stare at me every time we went over Pearl Harbor or Hiroshima in History.  But again, there is no way you would know about my experiences or my thoughts on this issue.

I will still go and see the film to show my support and to see Darren's acting in a different kind of role.

I've been really busy this week--so I haven't posted much on this forum. But this bit of news made me happy.


Aw, this is cute.  I love that Darren continues to do voice-acting for animated projects. 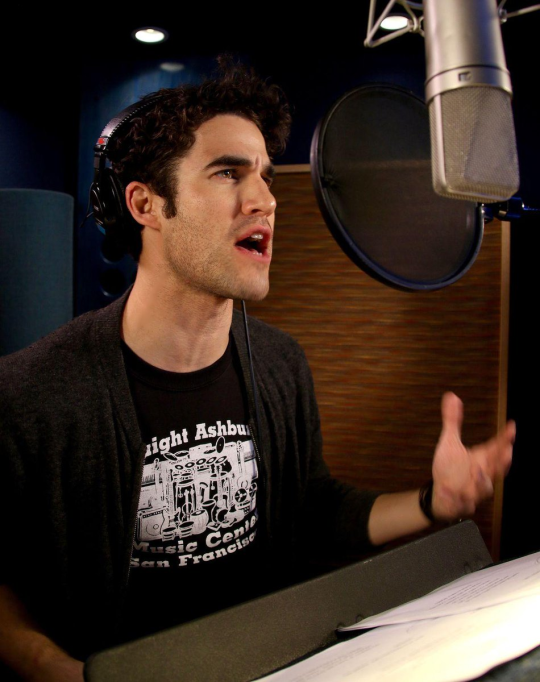 The film’s voice cast features Troy Baker (The Last of Us, Batman: Arkham Origins) as both Batman and The Joker (making him the first actor to ever take on both roles in one project), Darren Criss (the Emmy winning star of The Assassination of Gianni Versace: American Crime Story) as Raphael, Kyle Mooney (Saturday Night Live) as Michelangelo, Baron Vaughn (Grace and Frankie) as Donatello, Eric Bauza (The Woody Woodpecker Show) as Leonardo, Rachel Bloom (Crazy Ex-Girlfriend) as Batgirl, Tom Kenny (Spongebob Squarepants) as The Penguin, John DiMaggio (Adventure Time) as Mr. Freeze, Tara Strong (The Powerpuff Girls) as both Harley Quinn and Poison Ivy, Carlos Alazraqui (Reno 911!) as Bane, and Cas Anvar (The Expanse) as Ra’s al Ghul.

Batman vs. Teenage Mutant Ninja Turtles will arrive on 4K, Blu-ray, and Digital late this spring. For now, check out our official first look at images from the film, as well a behind-the-scenes shot of Criss recording his dialogue as Raphael.

Joining Leonardo, Donatello, Raphael, and Michelangelo will be not just the Caped Crusader, but also Robin and Batgirl, the latter of whom is voiced by Crazy Ex-Girlfriend’s Rachel Bloom. Bloom’s not the only big name here, either. The all-star cast also includes The Assassination of Gianni Versace’s Darren Criss, who, along with Kyle Mooney, Baron Vaughn, and Eric Bauza, will lend his voice to the teenage reptiles.

SpongeBob’s Tom Kenny and Futurama’s John DiMaggio will voice The Penguin and Mr. Freeze, respectively, while journeyman voice actor Troy Baker will, as he’s done in a number of video games, lend his voice to both Batman and The Joker. Harley Quinn, Bane, Poison Ivy, and Ra’s al Ghul will also be on hand.

The animated film swoops into your eyeballs sometime this spring.

So much to do and not enough time !

I love the idea of crossing over Batman and Ninja Turtles. And if Darren is part of the project...

Sounds like a very fun project.  I always thought one of the most enjoyable jobs would be to voice-act for fun animated projects.   You get paid for making different voices!
_________________