If you would like me to start a new Topic (thread) that is within the Category of "Darren's TV Projects"), please let me know.


Press leading up to the episode:

I really appreciate that Ryan Murphy thought of Darren when this role was written for AHS.

American Horror Story Scoop: Is Jessica Lange Back? Will Gaga Stay and who Will Make You say "Holly S-t"?


How did Darren Criss coming on AHS come about? Will you cast anyone else from Glee?

Ryan Murphy: I don’t know. I’m close to a number of them. The thing with Darren is he left Glee and went off to Hedwig, and it was such a sensation and he was so great. Darren and I had been talking about a number of things, and the thing about Darren is that I think he wants to do adult, different roles as I think anybody who’s played a teenager for more than four years would want to. He’s such a talented guy. Without telling me anything specific, he was just telling me about ‘the path that I’m on. This is what I want.’ We were writing this bat s–t crazy role on American Horror Story and I felt Darren would be good at this, because it’s completely different than anything you’ve seen him do before. He’s incredibly sexualized and violent in all his scenes for the most part with Kathy Bates. I thought, ‘Well, he’ll love that.’ We started filming and he didn’t disappoint. He’s just so talented. There’s nothing he can’t do. I feel the same way about Lea [Michele]. I feel the same way about many of them. You never say never—there’s room for it. If you’re in there, you’re in there. It really is a family feeling and a repertoire of people that come in and out. And that’s been great.
-eonline

Aw, Ryan missed working with Darren.  It's nice that Ryan wanted to work with Darren again.

eonline wrote:
Criss will be heading to Hotel to play a hipster who goes up against Kathy Bates. According to Murphy, Criss' casting happend due in part to Murphy not wanting to stop working with Criss after Glee.


"I was sad to see him go," Murphy said of Criss. "I love him. I was so proud to see what he did with Hedwig [and the Angry Inch], and he had told me specifically, I don't want to do light stuff anymore. I wanna do dark. So we were creating a role that had a lot of scenes with Kathy Bates, so I called up Darren and I said, do you wanna do a real f--ker who gets to tussle with Kathy, and he said yes."
-eonline

Part two finds Criss playing a hipster who, along with his girlfriend, leaves Silverlake to avoid trick-or-treaters. Given the couple’s snotty attitude, their decision to check into the Hotel Cortez is not ideal. “They’re horrified they can’t get their artisanal cheese and they hate the sheets and they put Iris [Kathy Bates] through the wringer and she’s not happy,” says Murphy.

- Entertainment Weekly on the Halloween 2 parter 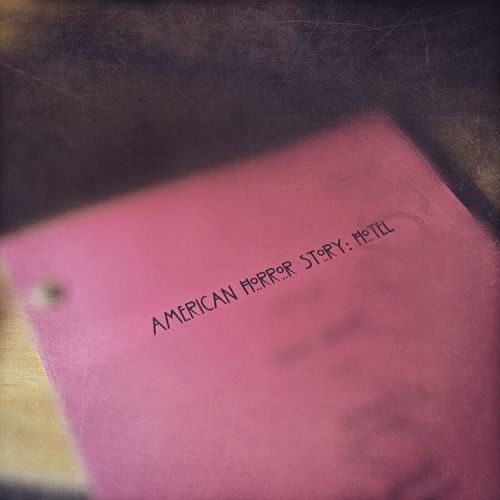 darrencriss Looking through this new little script I got. And I’m likin what I’m seein. This should be fun… #AHSHotel


Media coverage of the episode:

E! Online wrote:
"Raise your hand if you could watch Darren Criss order artisanal cheeses and grilled romaine for daysssssss. Just kidding, we could not either, and that was annoyingly funny as hell, but kudos to the artist formerly known as Blaine for deftly playing such a douchetastic 180 as Hotel Cortez’s resident hipster a-hole in tonight’s American Horror Story: Hotel. (Glee’s Kurt would have put him on blast at the first pretentious eye-roll, thus saving his life, further proving Klaine fans made a really valid life choice.)"

I like how the reviewer of this site seems to know Darren's other work and that he seems to appreciate Darren's scenes in this AHS episode.

mymbuzz.com wrote:Darren Criss! Glee’s Blaine Anderson is tremendous fun in a brief turn here as a magnificently hideous hipster. As well as Glee, you may well have heard him do voice-over work on stunning anime movies The Wind Rises and The Tale Of Princess Kaguya. If not, go and watch them. They’re beautiful.

An interview where Darren talks about his experience on AHS

Darren Criss Talks Being Killed Off “American Horror Story”
What was it like for Criss to be TV killed by Kathy Bates? Then, hear all about his first acting gig that landed him his SAG card.

TV Fanatic wrote:It was absolutely lovely to see Darren Criss on the screen again. Part of me hopes he has unfinished business and winds up a permanent fixture at the hotel. I can see the social commentary about "Instagram influencers" continuing with the sharp wit Ryan Murphy often employs against pop culture and it would be divine.

He may look like a cutie here, but he was just obnoxious. 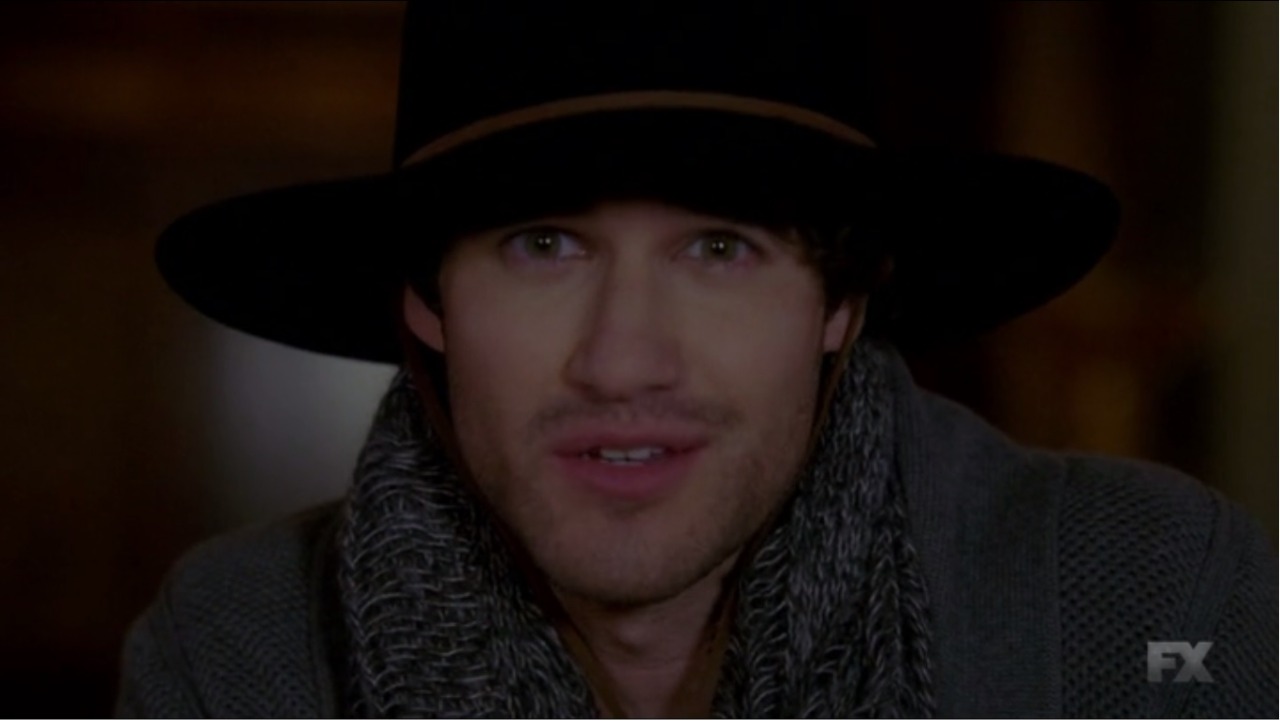 That would be wonderful if he was cast in SQ or AHS, Jeremy, either as a guest star or cast member (I'm not picky).

(And please, could he be a guest star on The Flash too?)

haha!  Love those tweets from Darren.

Thought I would post this (courtesy of dailydarrennews).   I would have loved to see Darren play the violin beautifully, all the while soaked in fake blood.

@hulu: @denisohare shares a special memory of @DarrenCriss at the #Hulu set before the @AHSFX #PaleyFest LA panel.


Some media coverage (thank you DCN/darrencriss-news):

Bustle wrote:
But I also have to admit that this overcrowding problem does come with some advantages, one of which involves the return of Darren Criss as a ghost on AHS: Hotel. As I'm sure you all recall, Iris pulled a full-blown Kathy-Bates-Misery on him not too long ago as a way to help own her new vamp-like abilities. But given that anyone who dies in this hotel with unfinished business can return, it's no surprise that we were granted with a quick cameo of Darren Criss' hipster character, Justin, who was wandering the halls with some very important unfinished business: HE NEEDED SOME KALE!

Anyway, it was great to see him and gives me hope that he'll potentially pop up a few more times throughout the rest of the season.

So as long as he still has such big scores to settle in the afterlife, this hotel is going to have yet another permanent resident on its hands. Sure, his character is pretty annoying (in kind of the best way). But you have to admit that any form of Darren Criss is certainly better than no Darren Criss at all. Now, will someone please get this guy some kale already?!
-Bustle

A pic of Justin's ghost. 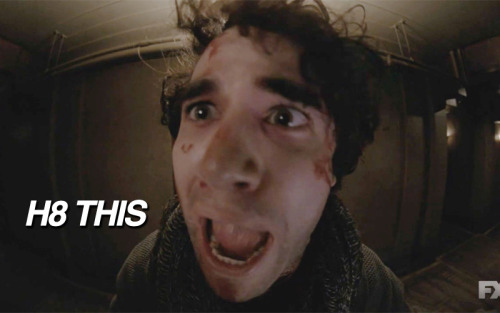 DCN
tirpse:
“Also the ghost of Darren Criss was starting to get antsy, but what else is new.”
Yahoo Recap: American Horror Story Hotel “Room 33″

Cosmopolitan.com wrote:
"My favorite parts of the episode were kind of throwaway lines, like when Iris showed up at the coffin pool with a gun and said, “Hell no, I was ready to do this!” I like that Darren Criss’s loop involves him yelling about kale, and when Liz told Ramona that Baby Bart “might crawl back in,” I guffawed."
— Recap American Horror Story “Room 33″ (cosmopolitan.com)

One of Darren's early TV shows was "Eastwick" (2009), where he played Josh Burton in several episodes.

I didn't watch the show while it was airing, but after Glee, I saw a few short videos of his scenes floating around.  His character was very charming and adorkable.


Darren's announcement that he was cast:

A gif of a cute scene where his character is being protective of a character (whose name was Mia! ha!) played by Ashley Benson, by putting his arm around her, but he then pretends to be swatting insects.

I sometimes wonder if Glee didn't base the relationship of Cooper and Blaine on Josh's relationship with his older brother Chad in Eastwick, played by Matt Dallas.   There was one scene where a cat called Anderson Cooper is on Eastwick. 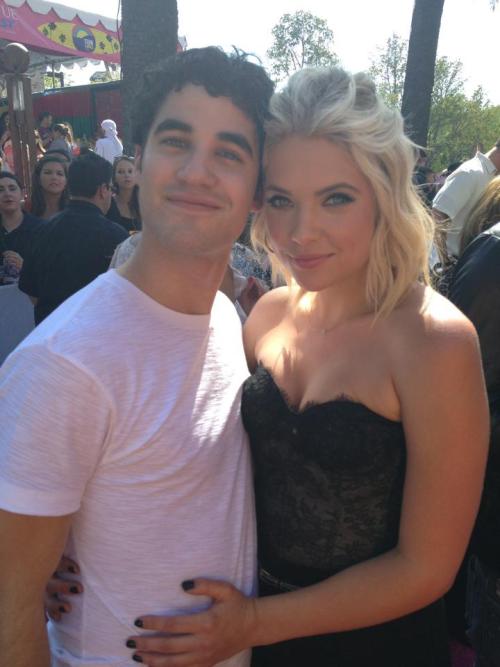 janel-moloney:
@DarrenCriss:     I was lying on the floor thinking, @MsKathyBates is winning an Emmy right now- On. My. Back. Just act dead, don’t move & let her be awesome x
via DCN

I've watched the season premiere of American Horror Story : Roanoke. I have the feeling it's less scary than usual (I think it wasn't much scarier than Twin Peaks, actually) and I've heard people saying the same thing. I've spent a good moment watching that premiere but I don't know yet if I'm gonna watch the other episodes.

As usual, they have brought back a few actors from last season. Maybe Darren will get a small role again. I would prefer him to be on Scream Queens but AHS would be nice too

Thanks so much Jeremy for updating us on AHS.    I'm very surprised to hear that the season premiere was not much scarier than Twin Peaks.  (I'm gonna go post in the Twin Peaks thread, since I watched the episode.  )  That's new for AHS, isn't it?  I forget what you have said about AHS before.  Did you regularly watch AHS?

I heard that Jacob Artist is going to be on AHS.  I'm happy for him.  He seems like a nice person.

Jeremy wrote:As usual, they have brought back a few actors from last season. Maybe Darren will get a small role again. I would prefer him to be on Scream Queens but AHS would be nice too

If Darren was on any Ryan Murphy show, or any other TV show (that was a good show), I would be very happy, guest star or regular.   I am missing seeing him on my TV screen.

I have just watched a few AHS episodes, I'm not a regular viewer.

I didn't know about Jacob. It's a good news for me too. Nonetheless, if there is already a Glee alumn in this season, there may be little chance to see Darren... And, as I've said before, I'd like to see him back in a TV series.

Let's just cross our fingers Darren makes an appearance (or two) on AHS or Scream Queens (or on some other TV show).

Re: Darren's Past TV Projects