Blaine Anderson in the News

Please feel free to post about one of our favorite TV characters, Blaine Anderson, as he is covered by the media.  To post in this thread ("Topic"), please select "Post Reply" and then type your post.

@Culturalist: #Klaine is the #1 couple on Culturalist! Do they make your Top 10? http://bit.ly/29pJUdw  @DarrenCriss @ChrisColfer

ha!  This made me laugh. 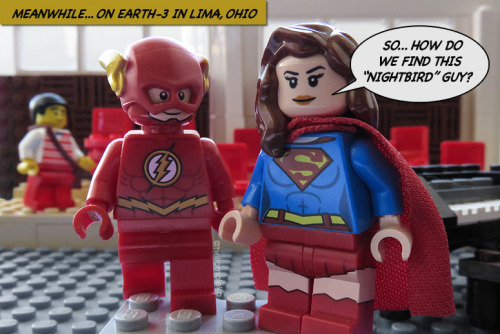 hellomaleka
In honor of tonight’s Supergirl season finale and tomorrow’s return of The Flash – Barry and Kara team up to visit McKinley High School on Earth-3 in search of the elusive (or not so elusive) Nightbird. 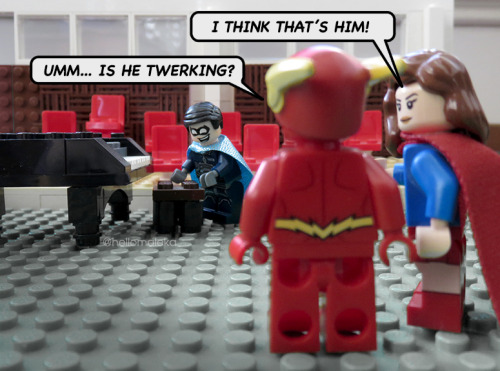 hellomaleka
Part 2 of the Search for Nightbird on Earth-3: Looks like they’ve found Nightbird… or did they?


This is pretty cool.  Looks like it took a lot of time!

Is this "EVerybody Wants to Rule the World"?   The funny thing is, if Darren wasn't here playing dapper Blaine in this song performance, he happily would be one of the folks dressed up in superhero costumes and jumping and twirling around.

Is this "EVerybody Wants to Rule the World"?

I think it is 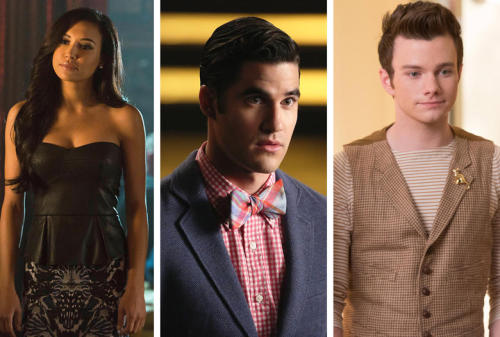 The Greatest LGBT TV Characters of All Time
Santana Lopez, Blaine Anderson and Kurt Hummel, Glee (Naya Rivera, Darren Criss and Chris Colfer)
Santana (Rivera) didn’t get the story development she deserved when she came out, but she spat in the face of lesbian stereotypes and never apologized for who she was on Glee. Meanwhile, the Kurt (Colfer) and Blaine (Criss) love saga became the backbone of the show in later seasons and fostered one of the most ferocious online followings. #Klaine forever.

Not only does Darren Criss have an incredible voice and mad swagger, but this is the point in the series when we start to see something beautiful developing between Kurt and Blaine. Go back to where the magic began and relive your own teenage dream while watching Kurt make some serious heart-eyes at Blaine. D’aww.


This pic never fails to crack me up because of Blaine's face in the first pic (he must have had a lot of punch). 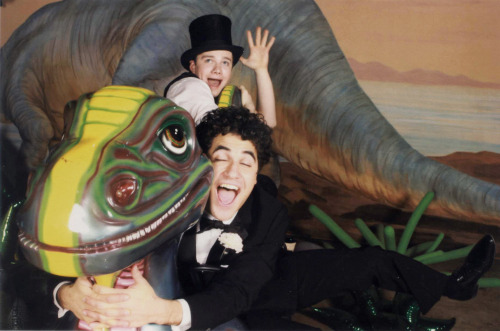 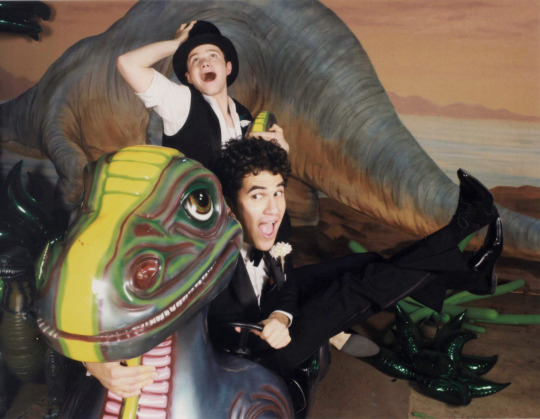 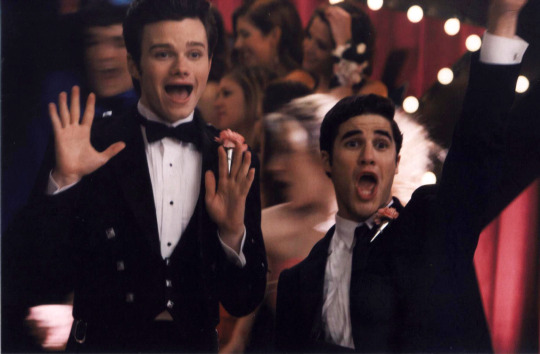 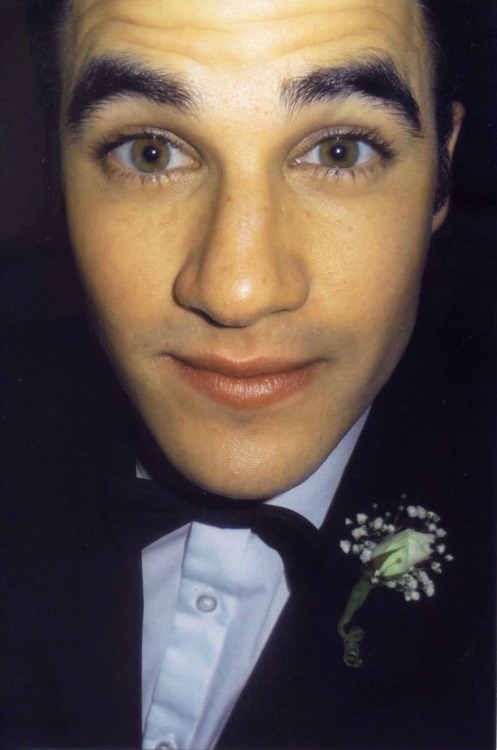 I wanted to share this gif.  I  like how this gif captures blaine's dynamic song performance style:

Guest
Aw Blainey! He's such a lil cutie! And watching the gif sets above makes me want to search youtube for his old performances. Him and Brittany really were the best performers of ND. You couldn't take your eyes of them.

I remember once I happened to be watching Glee with my extended family and my nephew, who had watched Glee, stated that Darren really was the best performer, in the sense of being the most dynamic and the most expressive in his performance style.   My nephew wasn't part of the fandom, more of a member of the general audience, and he didn't consider himself a fan of Darren/Blaine in particular.

My nephew wasn't part of the fandom, more of a member of the general audience, and he didn't consider himself a fan of Darren/Blaine in particular.

Didn't you want to say "did" instead ?

Hi Jeremy.  Actually, my nephew was not attached to any particular character.  He did not consider himself to be a fan of any particular actor either.   He just liked to watch because he enjoyed the snarky humor of Glee, and he liked the themes of Glee.

It actually was interesting to talk to him about Glee, because he wasn't part of the fandom, so I would ask his opinion on various characters/actors/episodes (although he didn't watch Glee to the end of Season 6, I'm not sure when he dropped off).
_________________

Came across some gif sets of Blaine and thought I would share:


Once again, showing what a dynamic performer Blaine (and Darren) was


One of the funniest scenes on Glee, where Darren showed how perfect his facial expressions are in terms of capturing Blaine's obliviousness and then awkward politeness.


Melissa does a great job in the background, showing how horrified she is.

Guest
That gif set is brilliant! Such an awkward moment! Poor Tina!

Speaking of Blaine the performer, some blog had a countdown of all the Glee characters and Blaine came six:

6.      Blaine Anderson (Darren Criss)
TA: The Dalton Academy Warblers were integral to the success of the second season; they kept the musical direction of the show connected with the American a cappella tradition and produced many of the best numbers. Let’s face it: they were the New Directions’ only

real competition. We were introduced to lead Warbler, Blaine, through Kurt’s eyes, as the prince of a kind of gay male utopia. His initial incarnation as both subject and object of Katy Perry’s ‘Teenage Dream’ remains one of Glee’s best moments. Perhaps the writers never quite developed a fully rounded character for Blaine. His clingy, irritating relationship with Kurt certainly sapped a lot of the energy and sexuality that he initially radiated, and his ultimate matrimonial fate remains profoundly depressing. However, he brought the choir room to life with his performances, which were always full of playfulness and joy, and this infected the group performances as well. Unlike Sam, he never looked like he was just screen-testing a pop video. He emerged as one of the series’s strongest, most versatile performers, and pretty much carried the New Directions through four seasons of competitions single-handedly. Without Blaine, much of Glee would have been unwatchable.


So much truth in those bolded bits. He really radiated whenever he performed and he proved to be very infectious on his cast mates in group numbers. He really elevated performances. Also the Warblers were amazing! Just a few vids to reminisce.....

Hmmm.  It's tempting to do a Blaine-centric Glee re-watch.   I miss Blaine too, Jeremy!  Unfortunately, I don't think I would have the time.  Is anyone else interested?

dusty, thanks for your post.     I do miss Blaine a great deal.   I really did connect with the character, his vulnerability, his kindness and positive energy.  As dusty said, he also was such a invaluable addition to Glee in terms of musical performers, both as a soloist and a group performer.

I completely agree with the parts of the quote that dusty highlighted, and I agree dusty, Blaine often elevated performances.  And I love the Warblers!


I also agree with this part of the quote:

"His initial incarnation as both subject and object of Katy Perry’s ‘Teenage Dream’ remains one of Glee’s best moments."

Here is the link to the article:  The Idiot Box

Speaking of that moment when Blaine performed "Teenage Dream":

After first being introduced to Kurt Hummel (played by Chris Colfer) as he was being thrown into a dumpster on the series premiere of Glee, the Fox show tackled gay issues big and small, bringing LGBT storylines to the forefront. In 2010, Kurt met the swoontastic (and equally out) Blaine Anderson (Darren Criss), causing the audience to cry “squee!” into their Tumblrs and Twitter accounts at the same time. Blaine and the Warblers serenaded Kurt with Katy Perry’s “Teenage Dream,” and the Glee cast earned its best single sales week for a download with the song’s release (214,000, according to Nielsen SoundScan).

Another piece of news from dailydarrennews that I had posted  in the Appreciation Thread:
Enlarge this image 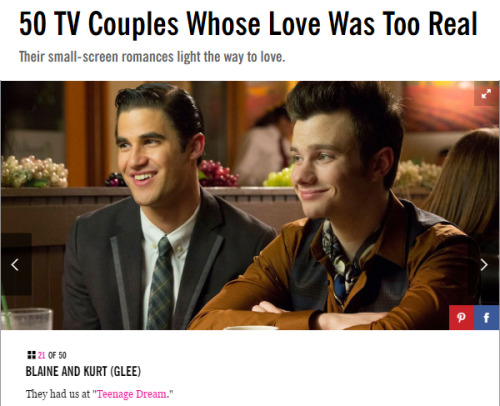 Speaking about Blaine in group numbers: 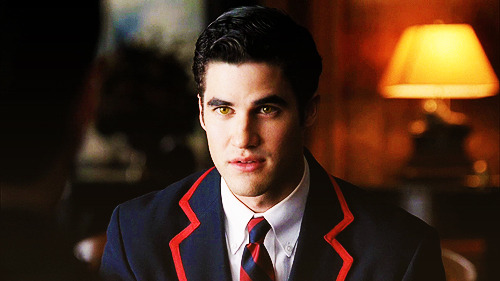 One of my favorite scenes, when "Nightbird" clumsily climbs through the window, just plunges downward, and then springs up, announcing "Nightbird."


I love how Blaine narrates in a dramatic,  formal voice,  "in a world on  the verge of . . . one hero stands against evil, I , the Dark Feather," then mutters "come on. come on,"  before he falls down like a bird who doesn't know how to fly.

Aw, doesn't this look like Blaine at different stages/ages? 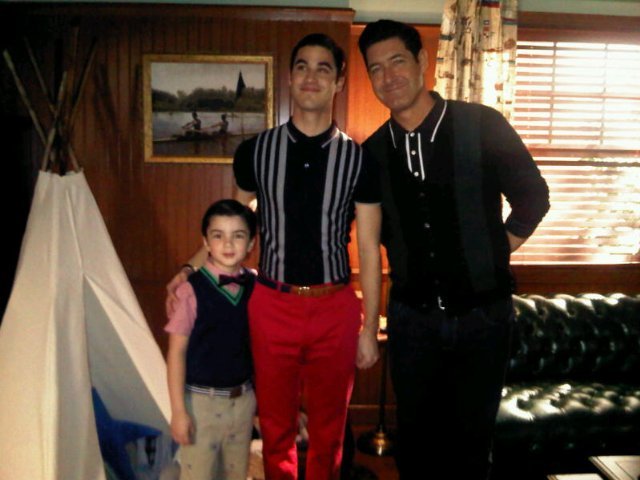 Vulture wrote:
Vulture Asks: Which TV Couple Do You Most Relate To?


For the next three weeks, Vulture is holding a TV Couple Scuffle to determine the greatest couple on television in the past 30 years. Below, we ask: Which is the TV couple you’ve most related to in your life? Who taught you something about the realities of being in a relationship? Which did you most identify with? Which do you see as a model couple, or a cautionary tale?


Kurt and Blaine, Glee
When, in season two, Glee introduced Blaine — the perfect love interest who could perfectly sing Katy Perry (hey, it was 2010) — I’d like to say that I was thrilled, but I remember reacting with near-physical disgust. This had more to do with me than the show. I was in high school, and the-part-in-the-last-Narnia-book-where-they-discover-a-whole-new-Narnia-inside-Narnia deep in the closet. I genuinely couldn’t process Kurt and Blaine’s love story, because, as I had always assumed, gay people don’t get to be in love, especially not in high school. When I got older, Glee, and Kurt and Blaine, were still there. I wish I could put this better — that they inspired me, or that I was moved by their love story — but mostly, I wanted to stop hearing about them. Why do these people get to be happy? Why are they open in a way I’m too terrified to be? (Also, sometimes strangers would confuse me with Chris Colfer, which in no way made things better.) Of course, I kept watching the show, but it wasn’t until few years later, when I started to come to terms with myself, that I fully understood why. Somehow, in the crazy-pants universe of Glee, their love was always sacred (aside from a few late-season shenanigans I’d rather not discuss). To a person who had unconsciously written off the possibility of a healthy relationship with a guy, it made that relationship seem disarmingly possible. Not that I want anyone to sing “Teenage Dream” to me (please don’t), but Kurt and Blaine taught me to want a relationship like theirs — or at least a relationship that I could take as seriously as Glee took theirs. Maybe that was what was so powerful: Glee’s implicit assertion, before gay marriage became widely legal, that any love story could matter as much as any other, even your own. — Jackson McHenry (@McHenryJD)

Digital Spy wrote:
Glee's Kurt and Blaine are voted as your favourite TV couple of all time 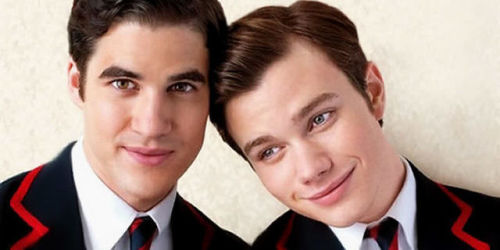 Over 37,800 votes were cast, but we now know your very favourite TV couple of all time.

Glee pair Kurt and Blaine easily finished on top of the list, with a massive 7,300 votes. They beat Emmerdale’s Aaron and Robert into second place with 5,200 votes.

Played by Chris Colfer and Darren Criss, ‘Klaine’ had quite the epic romance across Glee’s six seasons, but their love conquered all by the finale – getting hitched and becoming dads. And now this!

Re: Blaine Anderson in the News