If you would like me to start a new Topic (thread) that is within the Category of "Miscellaneous News"), please let me know. 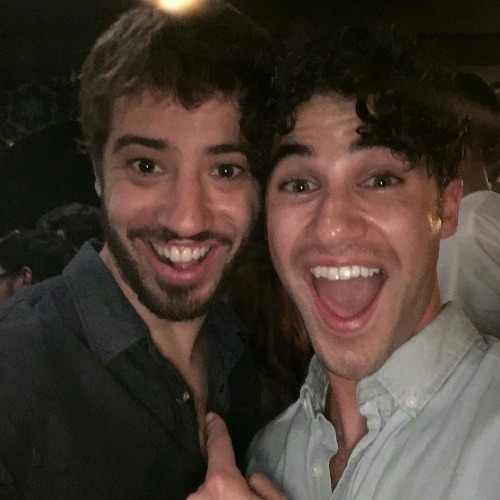 Some pics with fans at Firebringer. 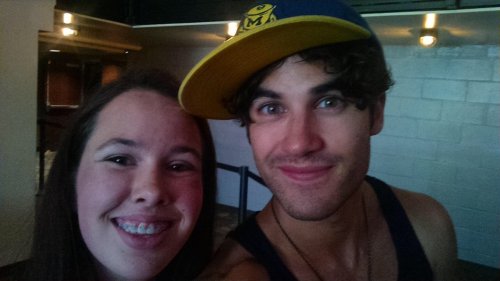 @Madalyn_Quitter I met @DarrenCriss today and that was pretty cool

Eric Kahn Gale is a member of StarKid (not sure about Jade).   It seems most of the folks in the pics are StarKids, so I thought it would be appropriate to post those pics here. jlbeatty: A VERY magic school bus indeed! #ingaledona
slowpez8: Here’s a bad pic to show you that it’s time!!! On the school bus to go to the #ingaledona wedding. @shootthewendy Videos of Mia performing vocals at Jade and Eric's wedding, with Darren on guitar.

Also, video of Darren and his friends carrying their friends in chairs.   Source


Darren showing his support of the StarKid show, Firebringer.

We were just talking about HP.  Do you HP-lovers agree with this article?


The Very Potter series, a musical parody trilogy put on by StarKid Productions at the University of Michigan, is one of the best creations in all of fandom history. Despite being a completely ridiculous comedy that bore no official connection to JK Rowling's canon works, there appears to be a surprising amount of overlap between the musicals and the newly released script of Harry Potter and the Cursed Child.

Harry Potter and the Cursed Child explores Harry's relationship with his son Albus, two decades after the defeat of Voldemort. The trilogy of parody musicals mash together various characters and plot points from all seven books and spin them into three new stories that somehow still feel true to the original.

Here are all the unlikely similarities the two share:

Before The Cursed Child was a concept, before the Harry Potter films were complete, StarKid Productions took Hogwarts to the stage. Part of the musicals' charm is the low-budget take on things like trains, dragons, and magic.


Time Travel Conspiracy That Involves Bringing Voldemort Back to Power

A Very Potter Sequel begins with Lucius Malfoy and other Death Eaters remarking about how there's nowhere for the story to go after the resolution of Deathly Hallows.

The musical and The Cursed Child make the same decision on how to handle this: re-introduce the Time Turner and hatch a plot to bring Voldemort back to power. In A Very Potter Sequel, the Death Eaters travel back to Harry's first year to kill him before he can grow up and thwart Voldemort. In The Cursed Child, Voldemort's secret love child first travels back to the Triwizard Tournament and then to the night of the Potter family murder to stop Voldemort from giving Harry the power to destroy him.


Confirmation that Voldemort and Bella Actually Got It On

Speaking of love child, The Cursed Child confirms that Voldemort and Bellatrix had a relationship that went beyond dark lord/devoted follower. The original series makes it pretty clear that Bellatrix was obsessed with Voldemort, but that Voldemort was incapable of love. The Cursed Child leads us to believe that while he may have been incapable of love, he was capable of at least fathering a child by his most loyal lieutenant. While it comes as a surprise, it doesn't seem out of character for Voldemort to want to produce an heir.

A sexual relationship between Voldemort and Bellatrix (whom he calls "Trixie") is explicitly alluded to in A Very Potter Musical as well.


Before The Cursed Child featured the Potter-Weasleys finding common ground with Draco and teaming up, the Very Potter series offered it's own unique take on the character. The Draco Malfoy of the musicals is a total wuss, desperate for his father's approval, and secretly in love with Hermione. He's also played (brilliantly) by a woman, Lauren Lopez. He is interested in doing good, often sidetracked by his laziness or lust for power, but always ends up on the right side of things in the end. The musicals had him teaming up with and even saving the heroes on occasion, long before they all make amends in The Cursed Child.

A major issue in The Cursed Child is the persistent rumor that Draco's son, Scorpius, was actually fathered by Voldemort via a time travel scheme. It's proved false and it's a wonder that such a convoluted rumor gained so much traction in the first place. In A Very Potter Sequel, Lucius reveals a secret that is only slightly more ridiculous— that Dobby is Draco's real father.

It's truly remarkable that both productions call Malfoy paternity into question, painting both Lucius and Draco as cuckolds of Dobby and Voldemort, respectively.

Noma Dumezweni's casting as Hermione Granger caused quite a stir, though she had the full support of JK Rowling and reportedly does a fantastic job at playing the character. Years earlier though, StarKid had an Asian Lavender Brown, a black Bellatrix, a white Cho Chang, and a black Yaxley. Characters were easily played by actors whose races didn't match the traditional portrayal.

Very Potter really did it all, even down to the surprise attack from the witch who passes out snacks on the Hogwarts Express. In The Cursed Child, she's revealed to be a monster tasked with keeping children on the train, while in the Very Potter musicals, she's a Death Eater in disguise.

If you haven't read Harry Potter and The Cursed Child yet, the script is available in stores now, and if you haven't had the pleasure of the Very Potter musicals, they're all up on YouTube.

I do not follow StarKid Productions as closely as other fans of Darren, so I don't know many of the names of the various members of StarKid.    I found this article that is a convenient list of the members.  I thought I would post it here.  The article is not dated, but it obviously was written before Glee ended.

As actor Dylan Saunders says, Team Starkid is a community-- “the performers, the creators, designers, musicians and, most importantly, the audience... Everyone is in the trenches together.”

However there is core ensemble of people who work on or star in a majority of the Starkid productions. Most notable of the these members is actor/singer/songwriter Darren Criss. Darren played Harry in all of the Very Potter musicals as well as wrote a majority of the songs in Starkid’s first few musicals. Currently he stars in the television show Glee, playing Blaine Anderson. Starkid member, Brian Holden, has played a variety of characters in the productions, from werewolf to giant, and is now taking on a director and producer role for the group. Dylan Saunders is most remembered for playing Dumbledore in the Very Potter musicals but is also known for his rich voice. Joey Richter, who currently lives in Los Angeles, is another prominent member who, while acting in the team’s productions, also plays Officer Petey in the Disney Channel show Jessie.

The main ladies of Team Starkid are just as important. Jaime Lyn Beatty has been around since the very beginning, playing a role in every Starkid musical. In addition to acting, she has also released her first solo EP entitled Dolphin Safe Tunes. Lauren Lopez is known for playing male roles during her tenure as a Starkid. Her most famous role is playing Draco in the Very Potter musicals. Finally Meredith Stepien rounds out the main ladies. A singer and actor, Meredith also is a stand-up comedic, continually performing at clubs in Chicago.

Note:  I don't see Joe Walker on the above list, but he is part of StarKid too.

Another article with more info on each StarKid member:  fuckyeahstarkidpotter

The power of StarKid. dailydarrennews:
Who Should Play Young Dumbledore?

Aw, "Friendsgiving."  Love that description.  Love that these friendships are so strong and lasting.  It makes me happy to know that Darren is surrounded by such wonderful friendships. 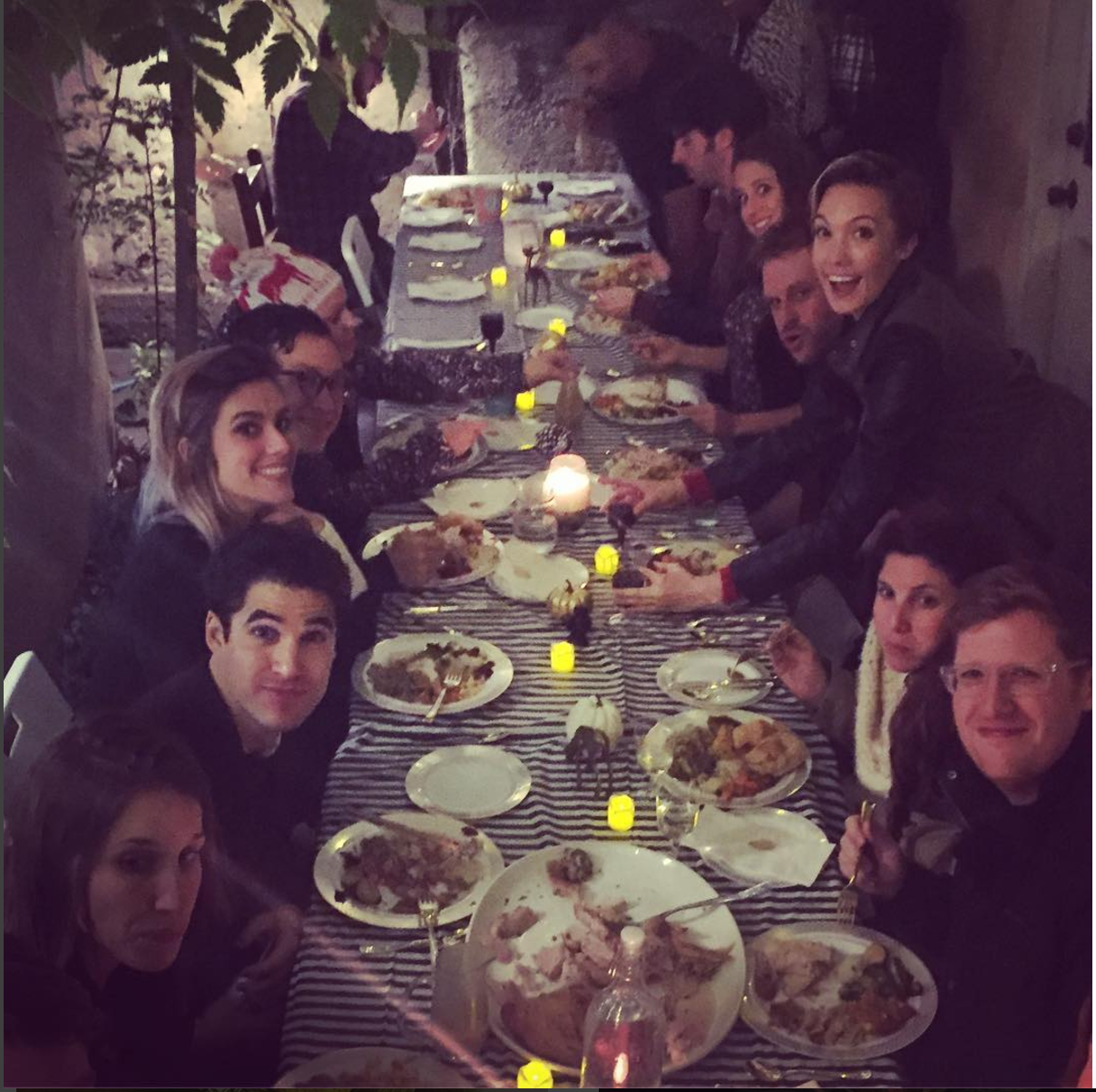 likewedreamimpossiblethings:
jlbeatty: Heaven is an endless dinner table with all the people I love. So, basically I’m ded. #friendsgiving
dailydarrennews 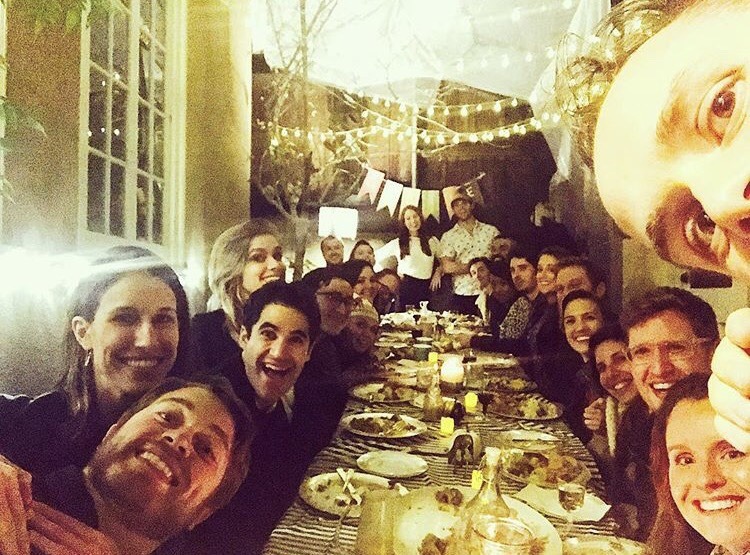 So I saw this tweet from Robert Schneider.  The link in the tweet leads to a site regarding a show at Feinstein's 54 Below (NYC) on January 22.  On this site, Robert Schneider is listed as the producer and director of the show.  So will 3 StarKids be performing together?  If so, Lilikoiluv and the rest of you StarKid fans will be pleased.   But not sure if it is confirmed that Darren is participating.

Just wanted to note that StarKid is performing in Dubliin.  Go DarrenCrissArmy for the funny photoshop job done with the various StarKid members.

StarKid wrote:
therealteamstarkid What’s more green? Our sunburn, our speedos, or DUBLIN????!!!!! Did you hear? We’re going to @leakycon!!! Here’s our line-up. @jonyricker @slowpez8 @funkwox @claark @brian.holden @merediddys @jlbeatty @dylansaunders & Nick Lang!! See you in Dublin at the end of August!! (Kudos to Jaime for her photoshop skills and for Darren’s help as well) jlbeatty: About to board a flight home but before I do, I want to wish everyone a very Happy Pride and very Happy Harry Potterversary! YOU ARE NOT ALONE. We will always have each other and this endlessly inspiring community of some of the most accepting, loving, kind, and compassionate humans I have ever encountered. Please continue to be excellent to one another. Now, prepare my flying machine 
This is for you, Lilikoiluv, from Joe Moses.

It occurred to me that maybe I should have posted The Wayward Guide info here. Aw, this is nice.

The Wayward Guide (Tin Can Brothers) tincanbros Thanks to 2,474 amazing Kickstarter backers, we get to make #WaywardGuide this fall with some incredible people.