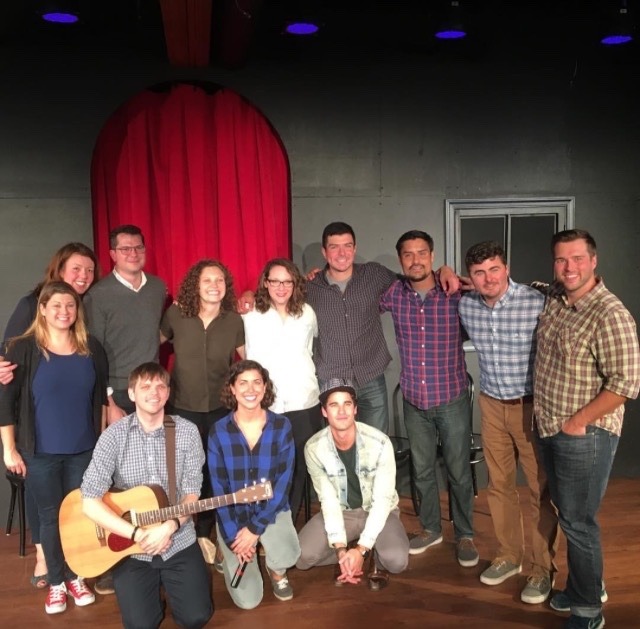 merediddys  Just thought I’d share this delightful moment with y'all

We are living in discouraging times.  Advocate and be active.  Fight for your beliefs.  But find joy when and where you can--and hold it tight, yet help others too. brian.holden The world is just shiiiiiiiiiitttttt right now so I’m remembering this very happy time that was two years ago! StarKid did a big revue at UM’s 100 anniversary if the school of Music, Theater, and Dance. Bunch of college buddies, working hard, putting on a show, then staying out all night together. #Repost @merediddys (@get_repost)
・・・
: ) such a fun weekend!!!!

haha.  Such a cute thing to say, "Happy Birthday, Nerds!"  Love the friendship among StarKids.

Darren looks so cute in this pic.  He also looks really young.   That is a pretty cake.  Looks like the Happy Birthday banner is made from white chocolate? 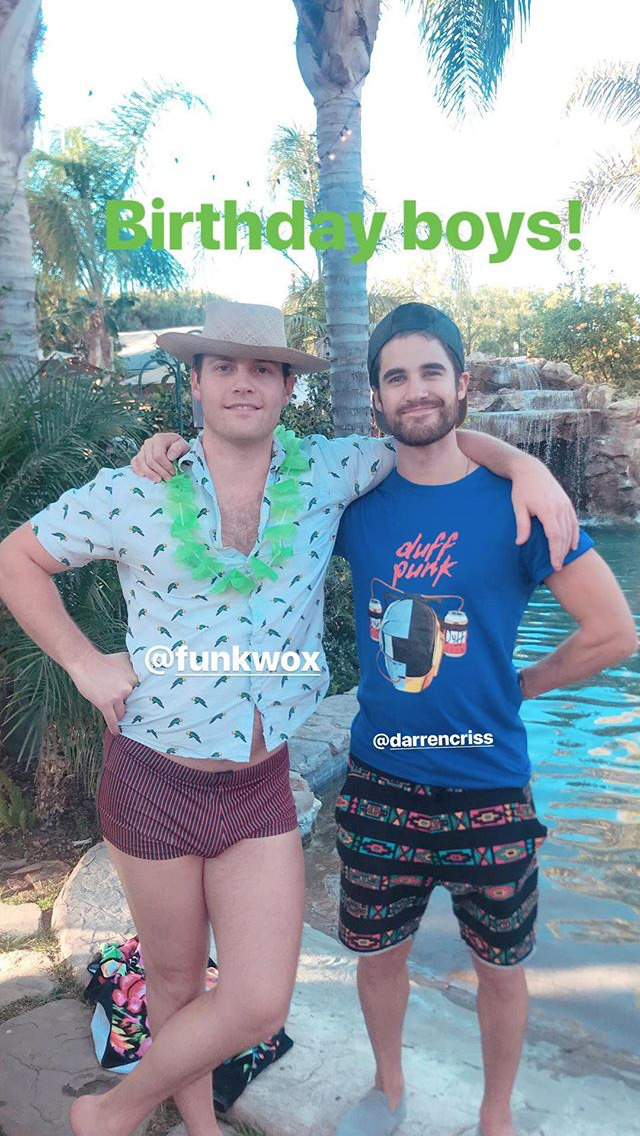 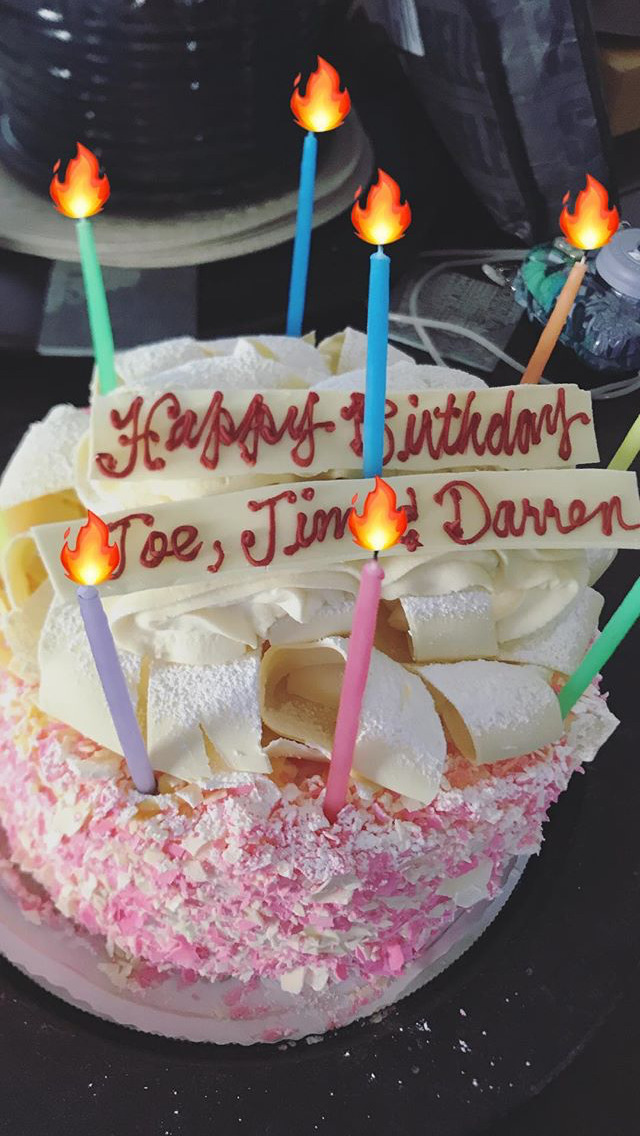 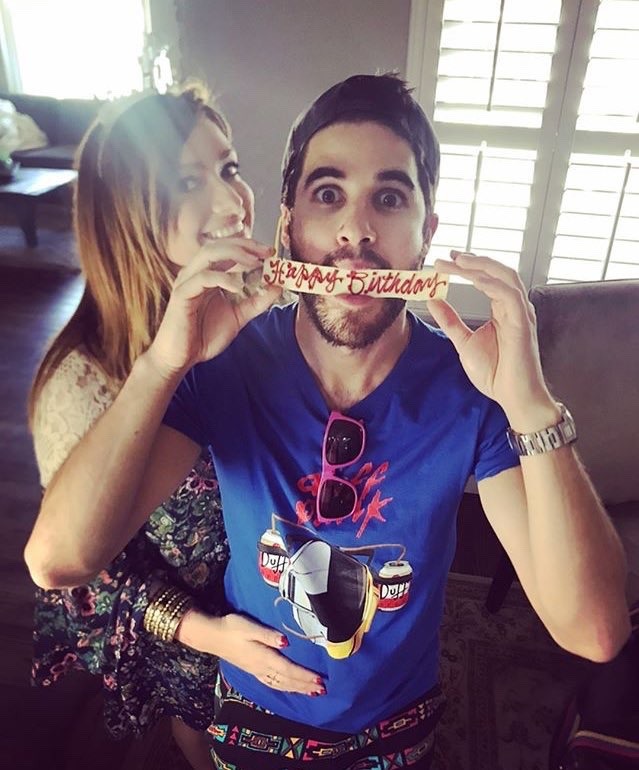 tracilacie: “These birthday getaways are quickly becoming one of my favorite times of the year! Thanks for being born, giving us the opportunity to celebrate you and friendship!”   https://www.instagram.com/p/BezERa4jk57/

@Poppy wrote:Looks like the Happy Birthday banner is made from white chocolate?

I don't know why they would do that, white chocolate is disgusting and should be made illegal.
But seeing them all hang out always makes happy, so nice that they're celebrating their birthdays together.

I finally found someone who agrees with me that white chocolate is not a good thing to eat (but it does make a pretty banner on a cake).

(And it is not a form of chocolate!

Completely agree with you, Lin, that it always makes me happy to see them celebrating their birthdays together and making sure they are a part of each other's lives throughout time. tracilacie: I’m not sure how I’ll top Darren jumping out of an enormous box for Joe’s birthday next year! I can now check wrapping a human off my bucket list. Yay for the bday boys! Production Diary #7 - Over the Hump!!

“But, the fun part of the day was finally having Darren on set! Darren was the final actor that we hadn’t seen yet on the production and we were grateful that his schedule worked out to make it possible. We had a great time playing with him, and letting him get sillier than some of his other recent roles. He even added an ad lib that we liked a lot, and decided to call back to on our last shoot day!”


Thought I would add this pic here too.  It's such a cute pic. Life and Style Magazine wrote:
The 'Glee' Cast Started Out With Small Roles Before Hitting It Big at McKinley High

Darren Criss also had a huge role before he played Blaine on Glee. Though it wasn't on TV or in movies, he did star as Harry Potter himself in A Very Potter Musical, a parody that took the Internet by storm in the summer of 2009. Fun fact for you, that was the time between the Glee pilot hitting TV in May and officially starting its first season in September. He also co-wrote the music and lyrics for the original show, and, with the other creators of the musical, founded StarKid Productions, a musical theater company now based out of Chicago. It wasn't until a year later that he joined the Glee cast. And now, he's a huge star, alternating between performing on Broadway and starring in Ryan Murphy's new show, American Crime Story.

Please visit the site to give the article a number of "clicks."  Source:
http://www.lifeandstylemag.com/posts/naya-rivera-the-royal-family-153876 therealteamstarkid It’s September 1, and you know what that means!

StarKid Friendsgiving and "A Very Potter Musical" at Feinstein's 54 Below

This is interesting!  Good news for StarKids!  Congrats to them!  I hope the StarKid cast is able to perform, or at least some of them.  Also--I hope they leave out the Cho Chang song--my feelings on this may not be appreciated by StarKid fans--but really, that song is bound to offend Asian-Americans who are not StarKid fans.  Not acceptable IMHO to a larger audience extending beyond StarKid fans.  I was teased with similar words in that song (replace "Ching Chong" instead of "Cho Chang," or "Ching Chong China man" instead of "Cho Chang")-- presented in the same sing-song manner as the song is sung-- when I was kid growing up and I can guarantee you, I'm not the only Asian-American kid with that experience.  It would not reflect well.  And the twist of the Asian woman not actually being Cho Chang doesn't fix the problem of the lyrics mixing a Chinese surname with "Domo Arigato" (which is Japanese), as well as the sing-song manner that the song is sung, which is a stereotype of how non-Asians believe Asians and/or Asian-Americans speak.  Just my two cents. 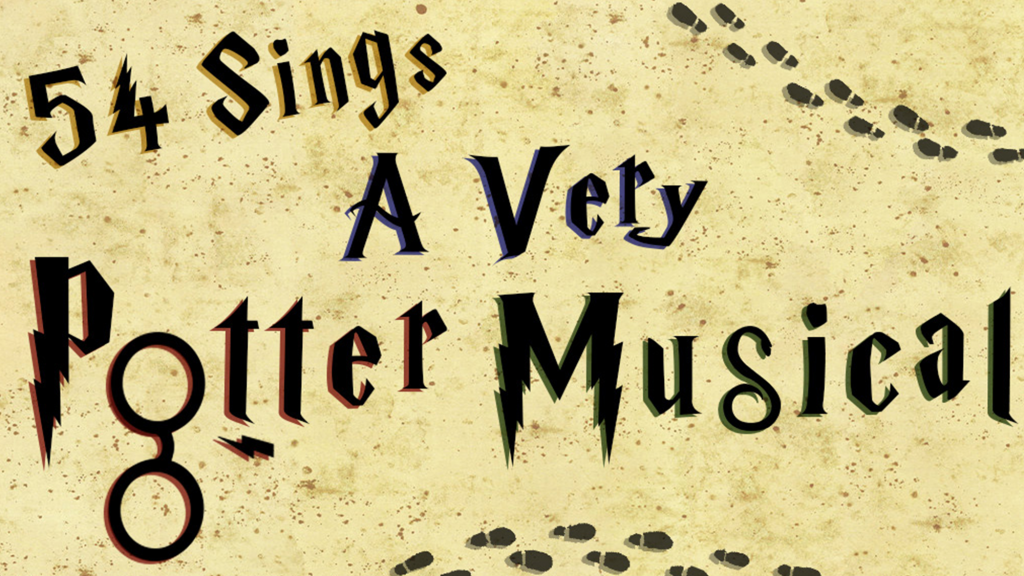 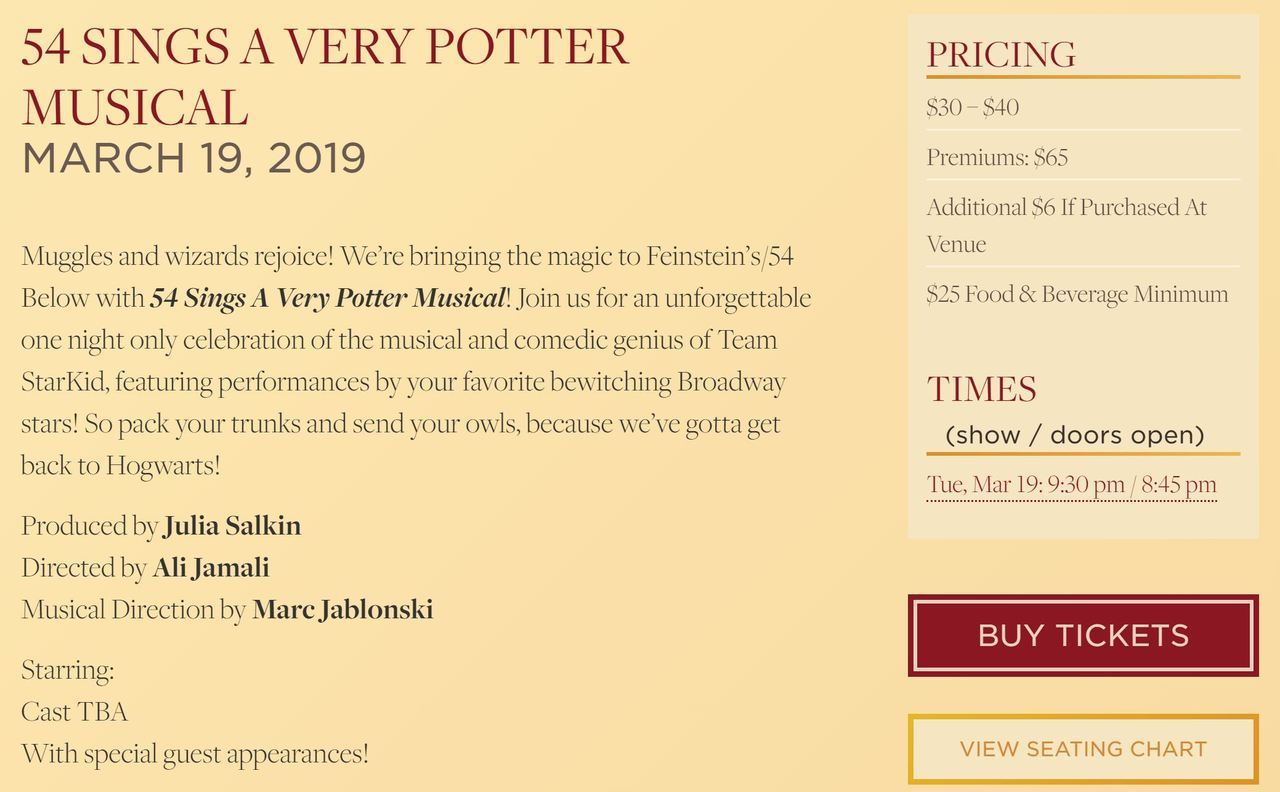 We’re superexcited to see that Feinstein’s @54Below is doing a cabaret-style show with music from A Very Potter Musical!! How totally awesome is that?!

(We know you’re going to ask, but we have no info on whether any members of @TeamStarKid are involved or performing.)

For those who are considering attending the show, here’s the important info:

- Feinstein’s 54 Below is in Manhattan/NYC 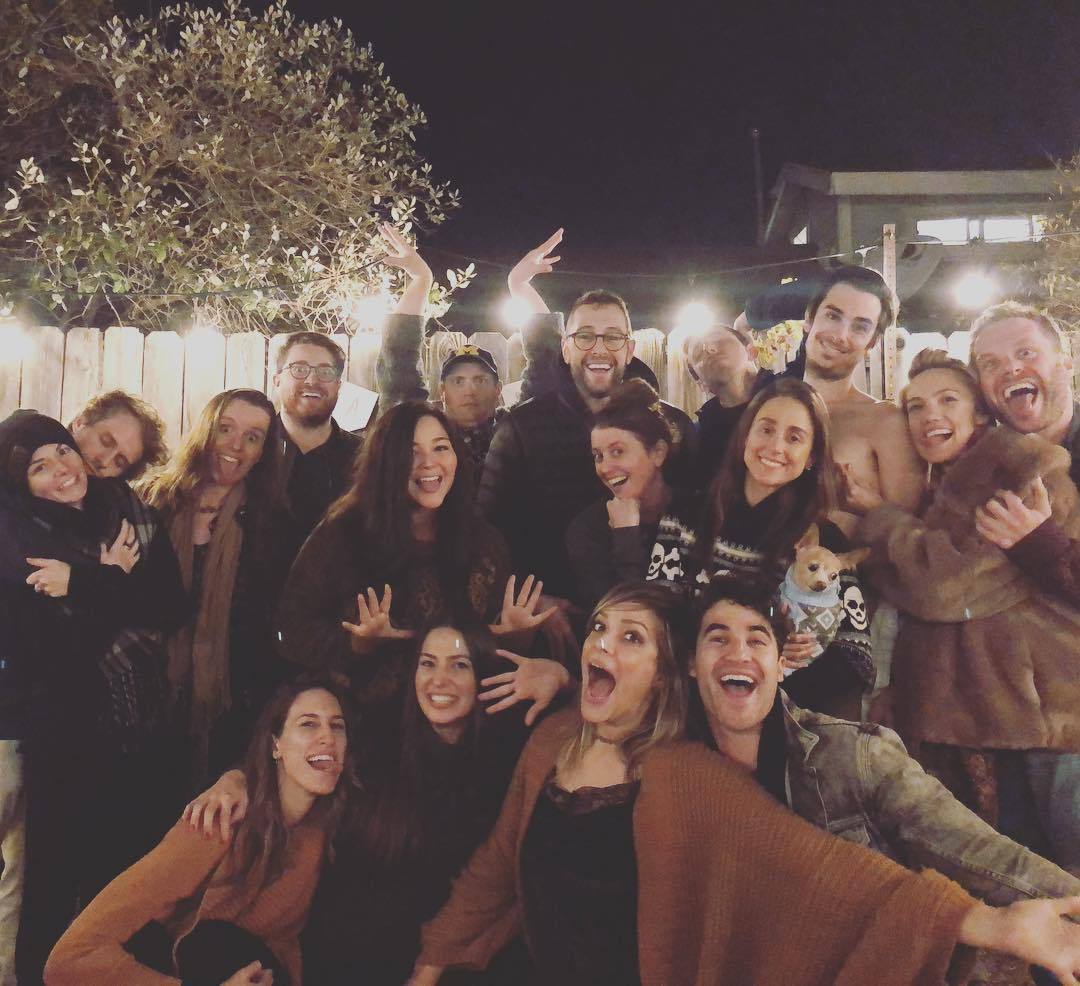 “#Friendsgiving is an understatement, we FAMILY. 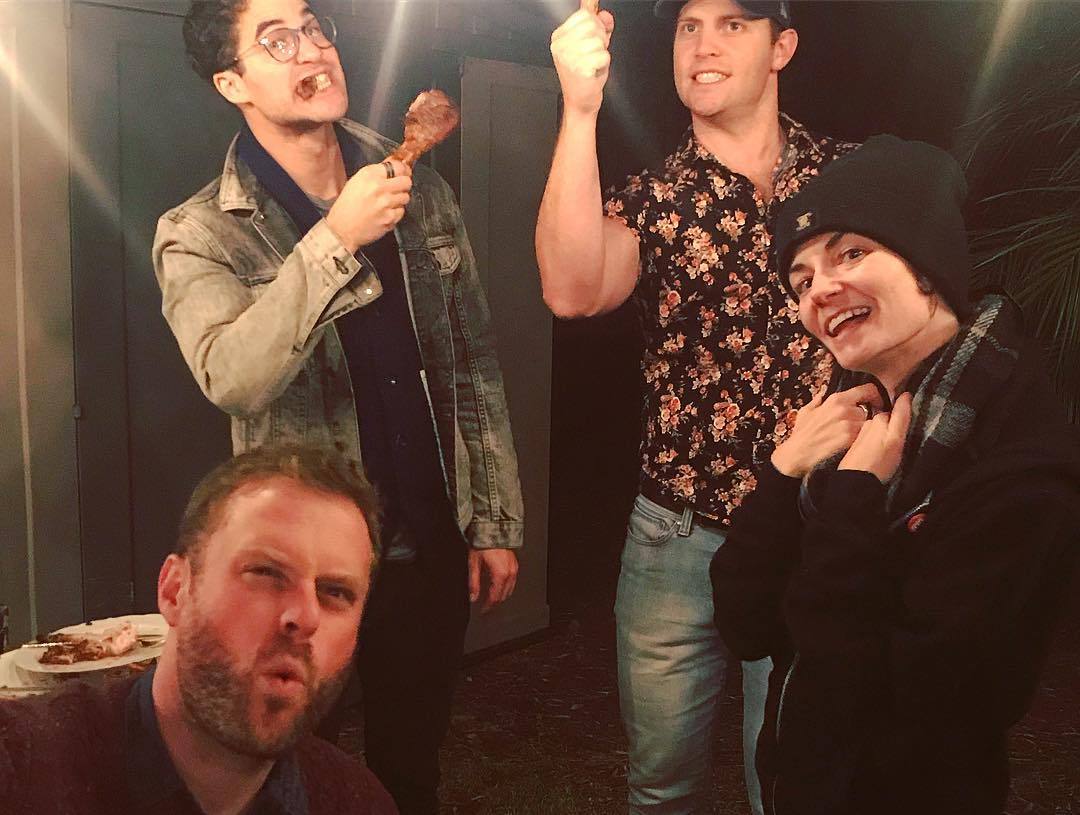 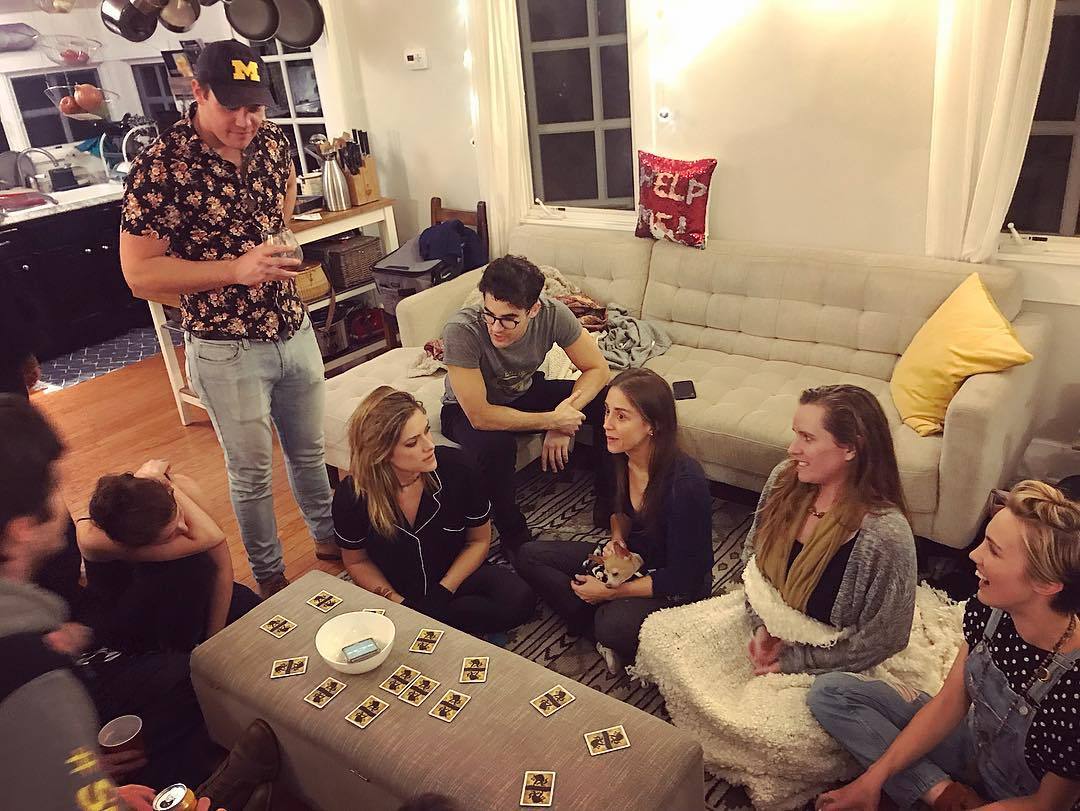 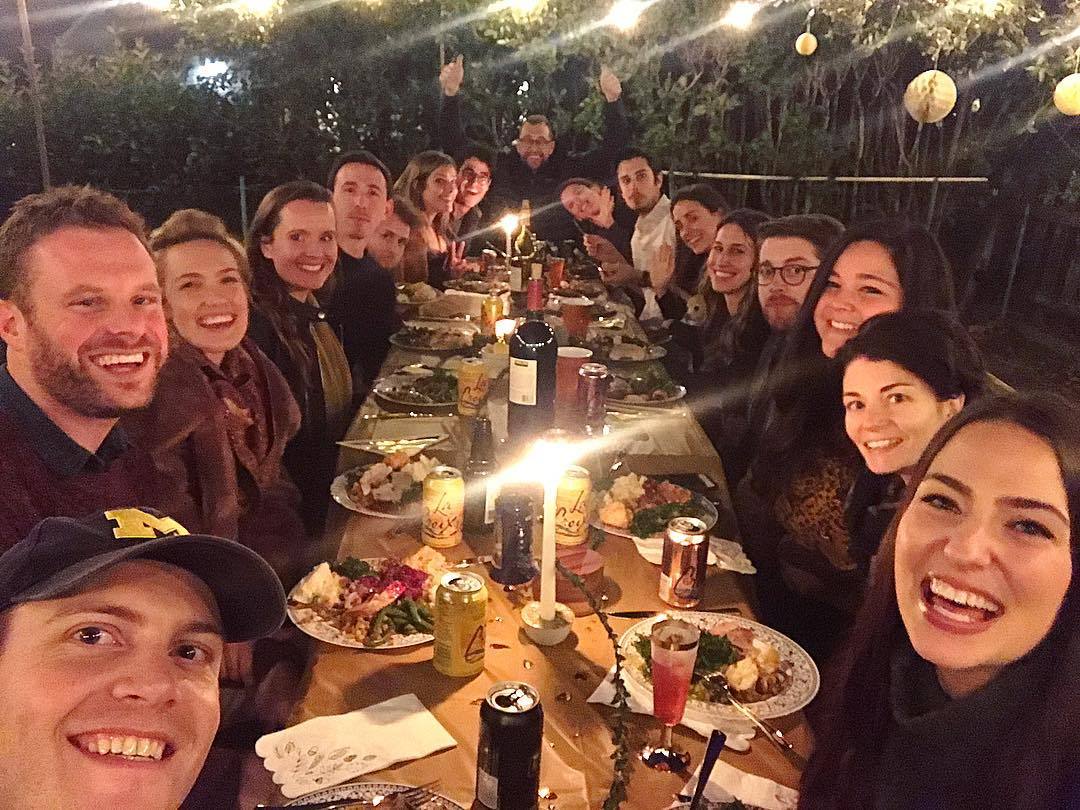 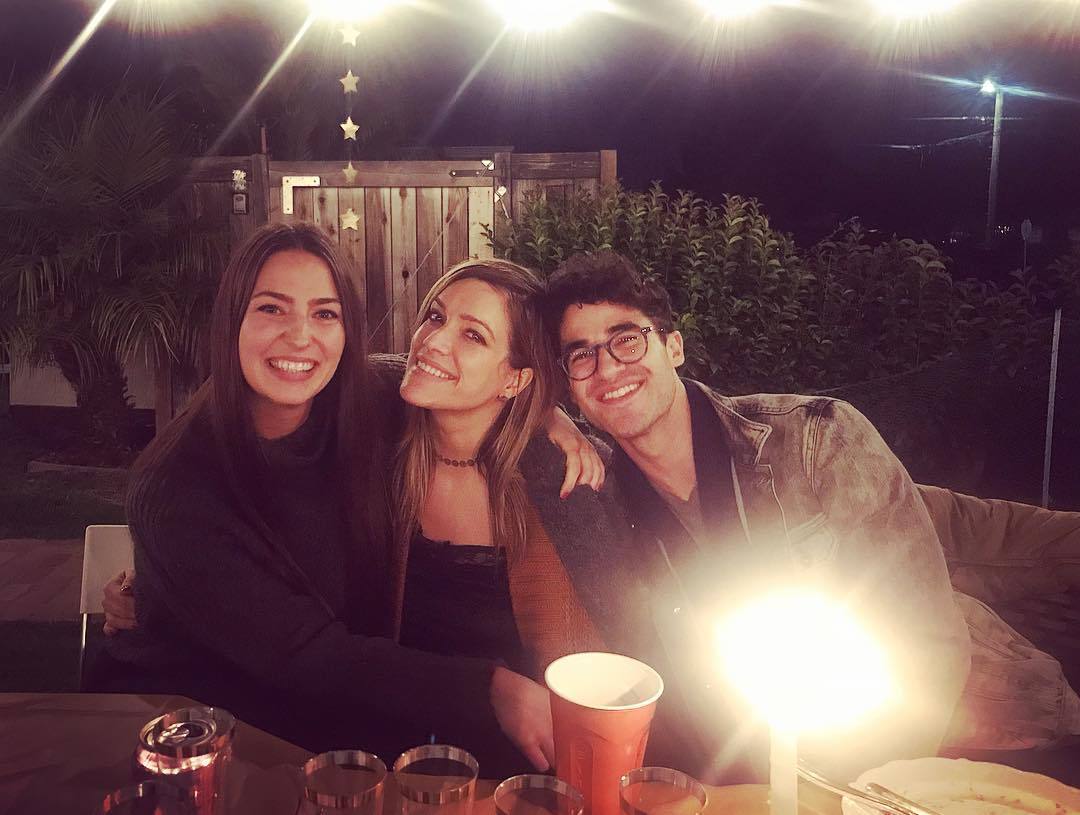 Via Traci Logan on IG