I don't think he was referring to Darren.

I would think Mark would be involved.

@*Jeremy* wrote:I don't think he was referring to Darren.

For all his huge faults that came to light later on (something I strongly doubt the others knew about and if they did I would like to think they would have gone to the police), when he was a regular on Glee he seemed to be great friends with the other guys. They were always hanging out and this feud happened during Glee.

I'm not surprised at there being friction though, it is invetiable with such a huge cast.

Anyways, I do think RM has a point when he says that the media (or people in general) always make a big deal out of women having friction but there's rarely the same attention given to boys. Maybe boys are better at shrugging it off and letting go, whereas women hold grudges for longer. Idk.

In other news, Amber has won the Evening Standard award for her role in Dreamgirls! Congrats Amber!

I don't know, I think the press and perhaps even segments of the fandom, seem to place more emphasis on conflict between women, than conflict between men.  Different standards for women.  Women are such emotional creatures, after all.  (*Sarcasm.)

What is the Evening Standard Award?  Is that like a Tony?

It could be almost anyone. I've heard something about some tension between Mark and Kevin but I don't know...

Anyway, I don't think Darren is involved because :

Lea will play a role in a new TV show. It's a comedy about a rapper becoming mayor.

Thanks for reporting the news, Jeremy. 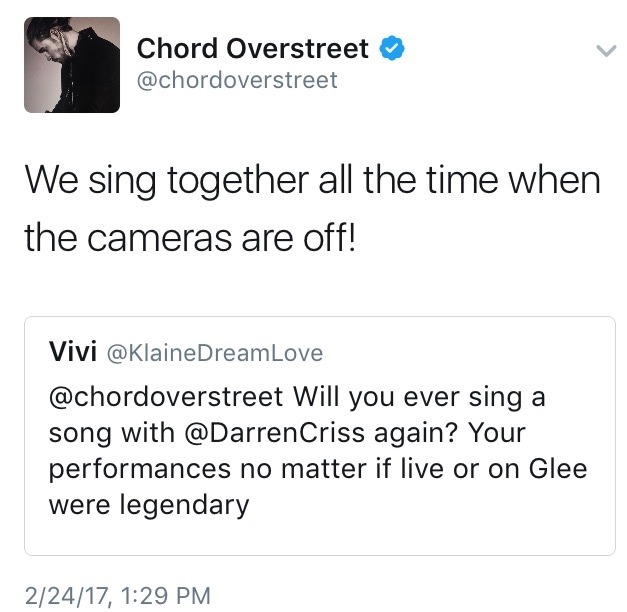 Also speaking about the Glee cast, don't forget to watch When We Rise next week on ABC.  Kevin will be in the show, which is sure to be touching and inspiring.   I believe it airs in four parts on 2/27, 3/1, 3/2, and 3/3 (but please double check your local listings).

Just so angering that just a few days ago, Trump rescinded President Obama's protections for transgenders students in public schools.   We are going backwards.

Lea is coming back with a second album. Here's the first single.

Impressive vocals.  Lea sure can sing!   The song sounds like something that would appear in a lovely Broadway musical.

I love this pic from Glee's final Paleyfest in 2015: 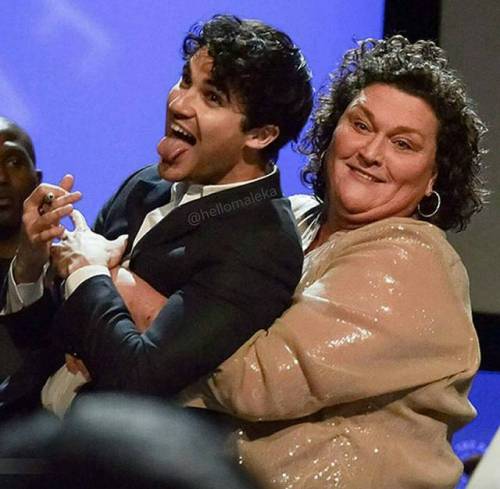 @hellomaleka - #TBT to March 16, 2015…Glee at PaleyFest in Hollywood, CA. Loved capturing this moment with #DarrenCriss and #DotMarieJones having some fun after the panel. One of my favorite casts!
tumblr source: x
original source: x

Such a cute photo!   I was just enjoying that pic on your blog, Lilikoiluv!  Thank you for bringing it over here!

Lea was recently on Ellen

Thanks for the video, Jeremy.

via Lea Michele IG story & Chordoroy on Snapchat
via DarrenCrissArmy

So wondering what exactly is the music that will be on Youtube tomorrow?  Some covers of songs they sing together?   Did Darren write a song for Lea?   (Is Darren going to be doing a modern dance interpretation of one of the songs on Lea's album? Kidding. )


Also-Lea's album is being released in April. Congrats Lea!  And while I'm at it-- congrats to Amber for her Olivier Award win too!  (And I've been watching Heather on Dancing with the Stars and she's been doing well.) 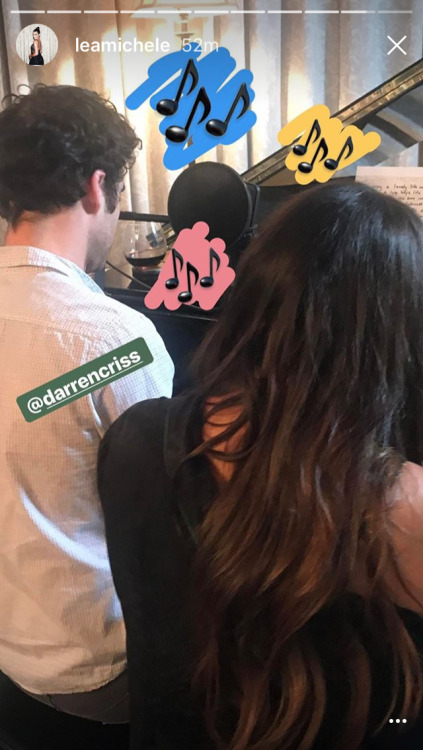 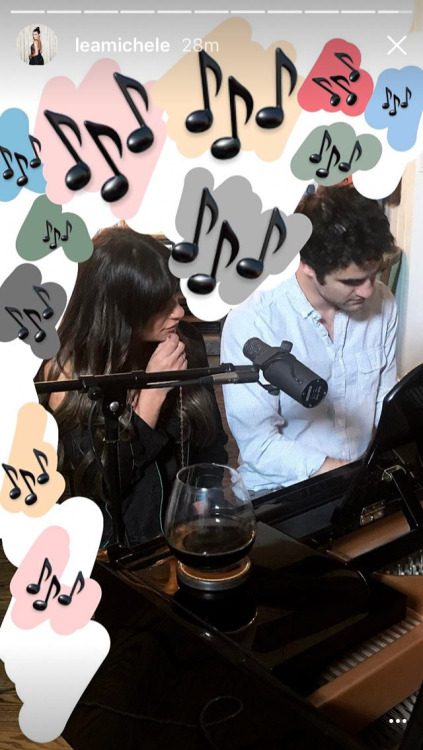 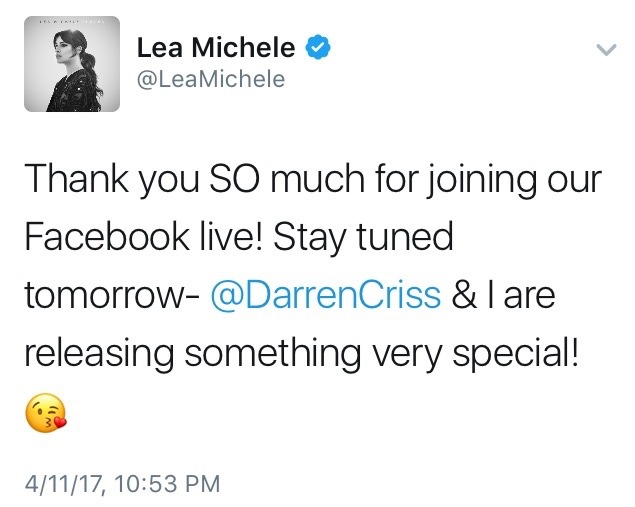 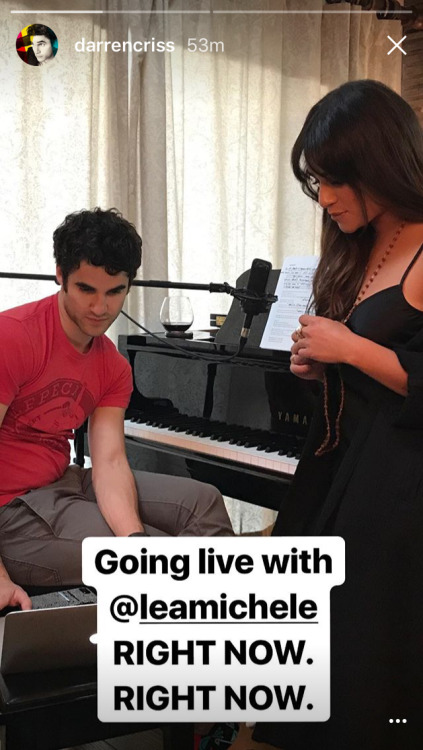 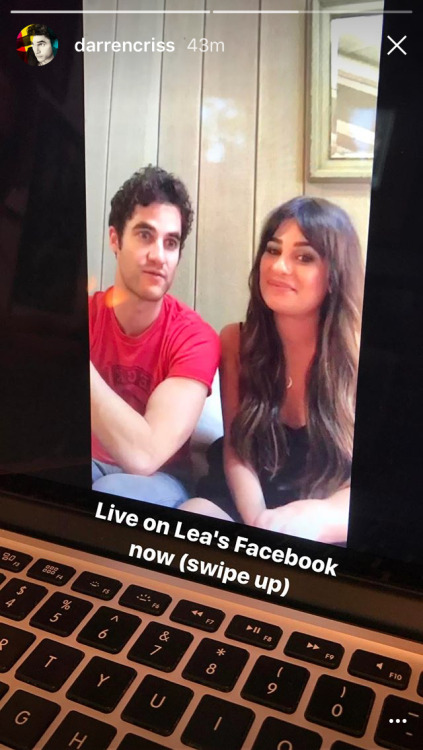 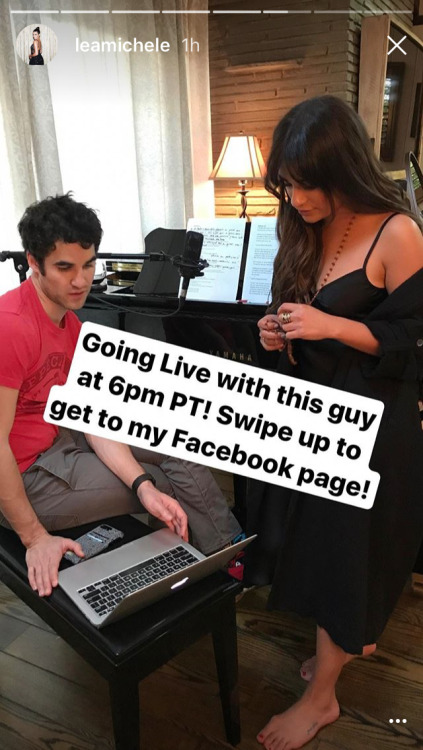 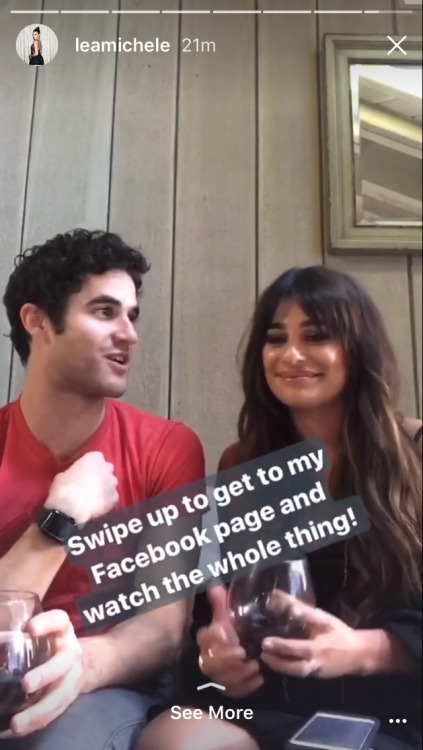 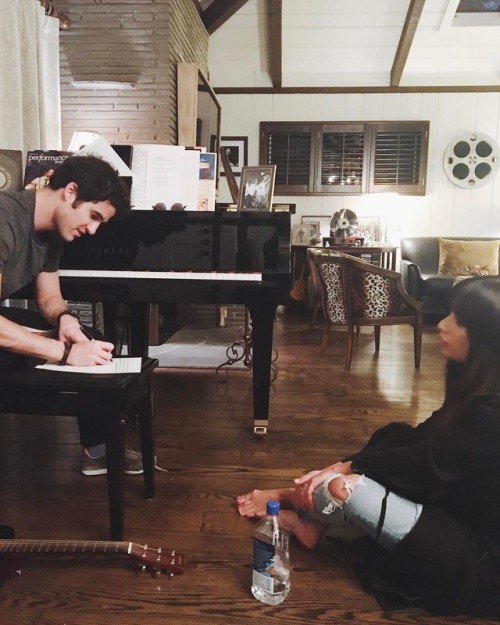 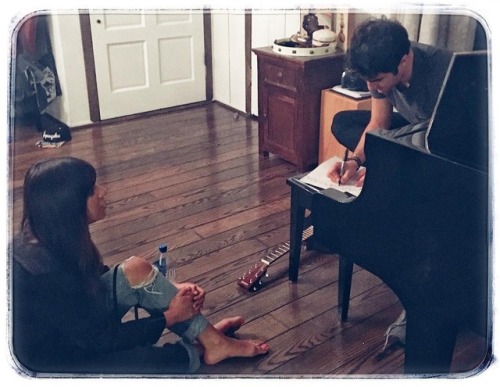 leamichele GUESS WHAT?! I’m going LIVE on Facebook with DARREN CRISS!!! Tune in tonight at 6pm PT! Start asking your questions in the comments section and we will try to answer as many as possible! This is going to be fun!

darrencriss Surprise! @leamichele and I will be hanging out on Facebook Live TONIGHT at 6pm PT! Don’t miss it.

Guest
I loved the livestream, so cute and fun and it made me super nostalgic for Glee. I always find this sort of thing more fun and interesting than most interviews because they can just talk about whatever.

They sang Lost Boys Life and a song from Lea's new album together, plus their first duet from Glee. Great idea to make their fans aware of each other's new music. It worked on me, I really like Lea's song. 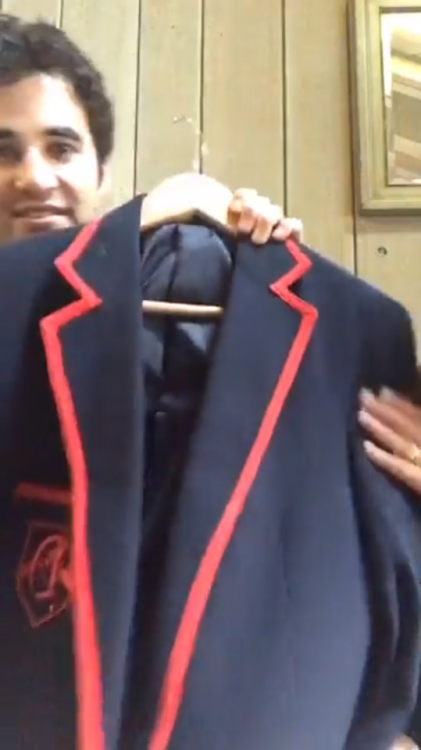 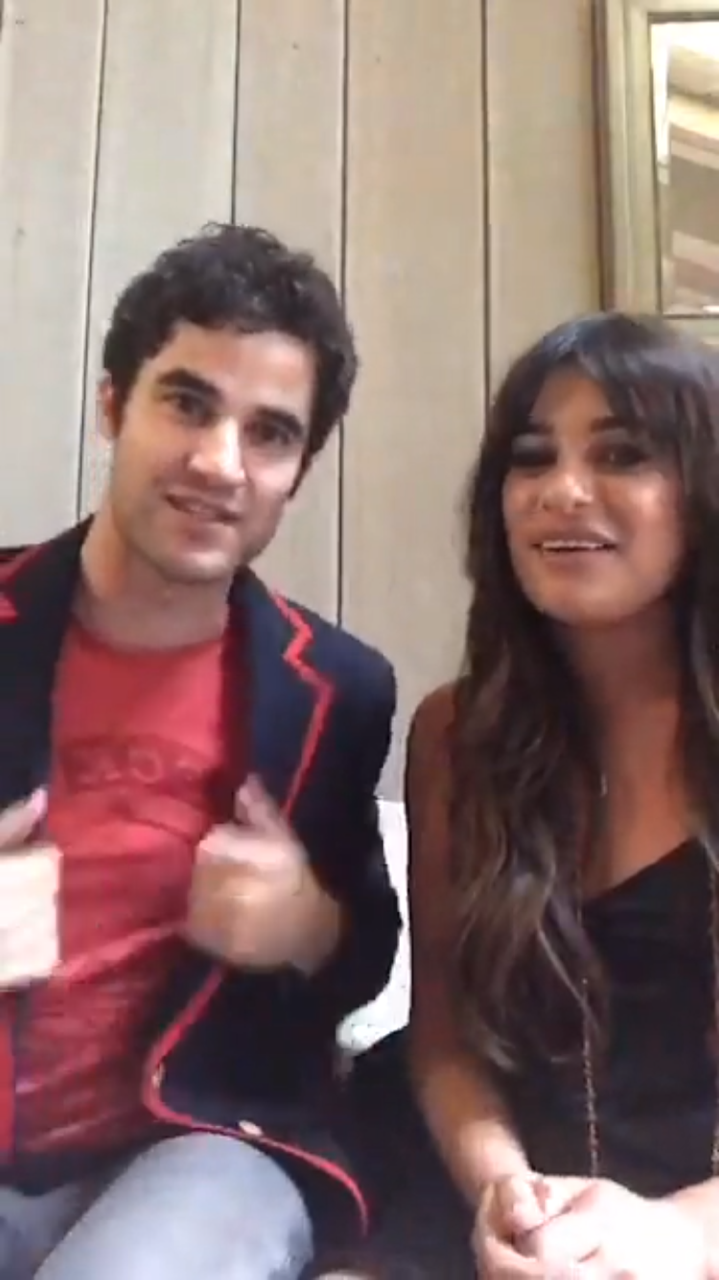 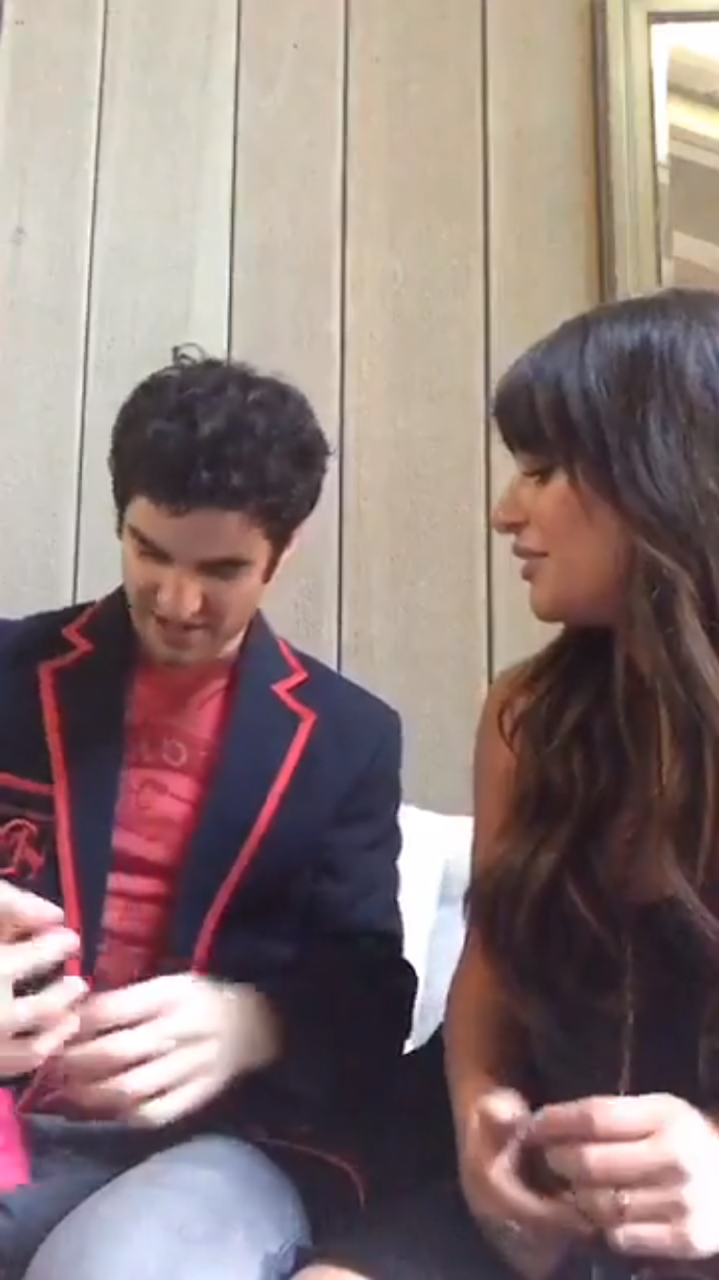 I forgot to say that here are a few interesting things that Darren mentioned in the 31 minute chat on Facebook live:

--Darren is about to go into working on Versace:  Amercian Crime Story,

--Darren forgot that Mike and Tina dated on Glee!  What?

--Darren is working with the respected costume designer Lou Eyrich.  He met Lou at the Costumer Designers Guild Awards on February 21.

--He mentioned that preparation for Versace is a bleak preparation process, which I would understand because he is preparing to be in the head space of a cold-blooded, psychotic serial killer

--He didn't work much with Ryan Murphy while on Glee.  He said the only time Ryan directed him on Glee was when Ryan directed the scene with him, Amber and Chris in a scene in Breadsticks.

--Darren and Lea texted Amber (to congratulate her on the Olivier Award?), but Amber didn't text either of them back.

--Darren's collectables from his time on Glee:  2nd place trophy for New Directions, Principal Figgins' sofa, and Blaine's original Warblers blazer.  And the little red piece of sound insulation material that he and Chord tore off of the wall of the (choir room?) set on Glee.

--Darren was the only one one on the Glee cast to suggest that he sing live for some songs, such as the sad Season 4 version of "Teenage Dream," (which by the way broke my heart  when I watched that scene; Darren was amazing in that scene).

--haha!  The time that Lea said that she listens to Darren's new music every single day, and then Darren (ever the lover of playing with words' double meanings) adds:  "Every single night"!  haha!  (But Lea missed the joke.

Can anyone remember anything else?

And congrats to Amber again for her Olivier Award.

This is an amazing performance at the Olivier Awards:

And Jenna performed at Feinstein's 54 Below.

I always wished that they would have let Jenna sing more on Glee.  She has such a beautiful voice that is full of emotion.

@Poppy wrote:--Darren forgot that Mike and Tina dated on Glee!  What?

Haha, I'm sure it all blurrs together for them, and he didn't really have many scenes with them together. And I mean, he also forgot that he got a slushy to the face from Grant, so...

@Poppy wrote:--Darren and Lea texted Amber (to congratulate her on the Olivier Award?), but Amber didn't text either of them back.

Aww, poor Amber must have about 500 congratulation texts to reply to.

@Poppy wrote:--He didn't work much with Ryan Murphy while on Glee.  He said the only time Ryan directed him on Glee was when Ryan directed the scene with him, Amber and Chris in a scene in Breadsticks.

That was a fun little scene.

I think Ryan also directed (or at least was on set for) Bills, Bills, Bills,  I vaguely remember a quote about how he wanted them to be "more drag queen".

And wikipedia also lists him for Sexy, but maybe he didn't do Darren's scenes.

I laughed at "I didn't know how to speak Ryan yet".

@Poppy wrote:I always wished that they would have let Jenna sing more on Glee.  She has such a beautiful voice that is full of emotion.

Thanks for posting this video.