Well, #23 is also a good performance.

I still prefer the music style of Computer Games but I'm glad that there are more instruments on this EP than on the first one.

My favourite song is Going nowhere. Hopefully it will be sent to the radios and there will be a "real" music video.

I liked this EP more.  It felt more like Darren.  But I also love the collaboration between Darren and Chuck.

Yes, "Going Nowhere" is my favorite on this EP as well.  I am hoping the same, Jeremy.  It would be fantastic if the song got some radio play and if Darren made a music video!


Aw, so nice of Tyler.  Love his support of Darren. 
Wow, this is nice!  Still at top of the Singer/Songwriter Album chart! 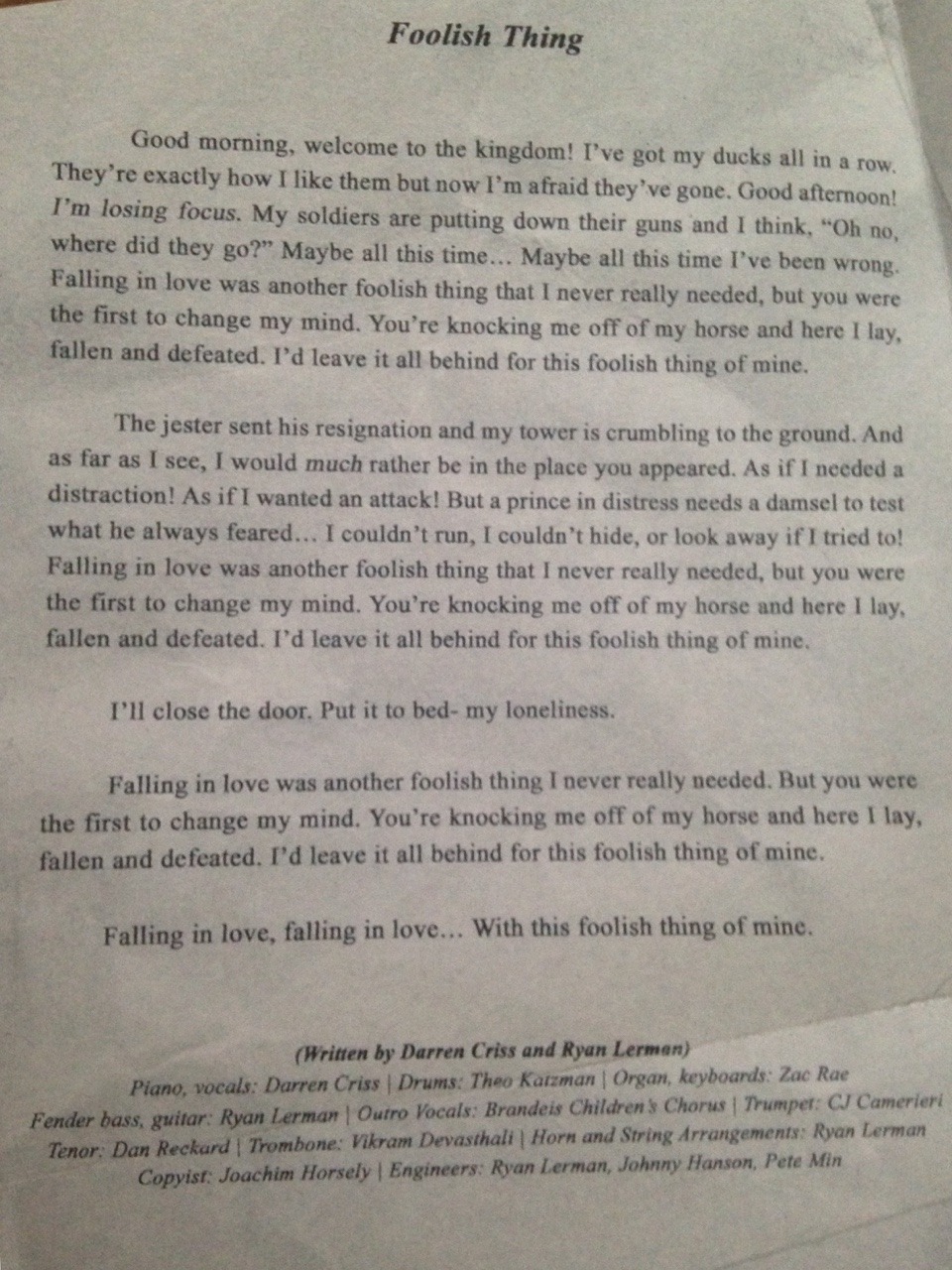 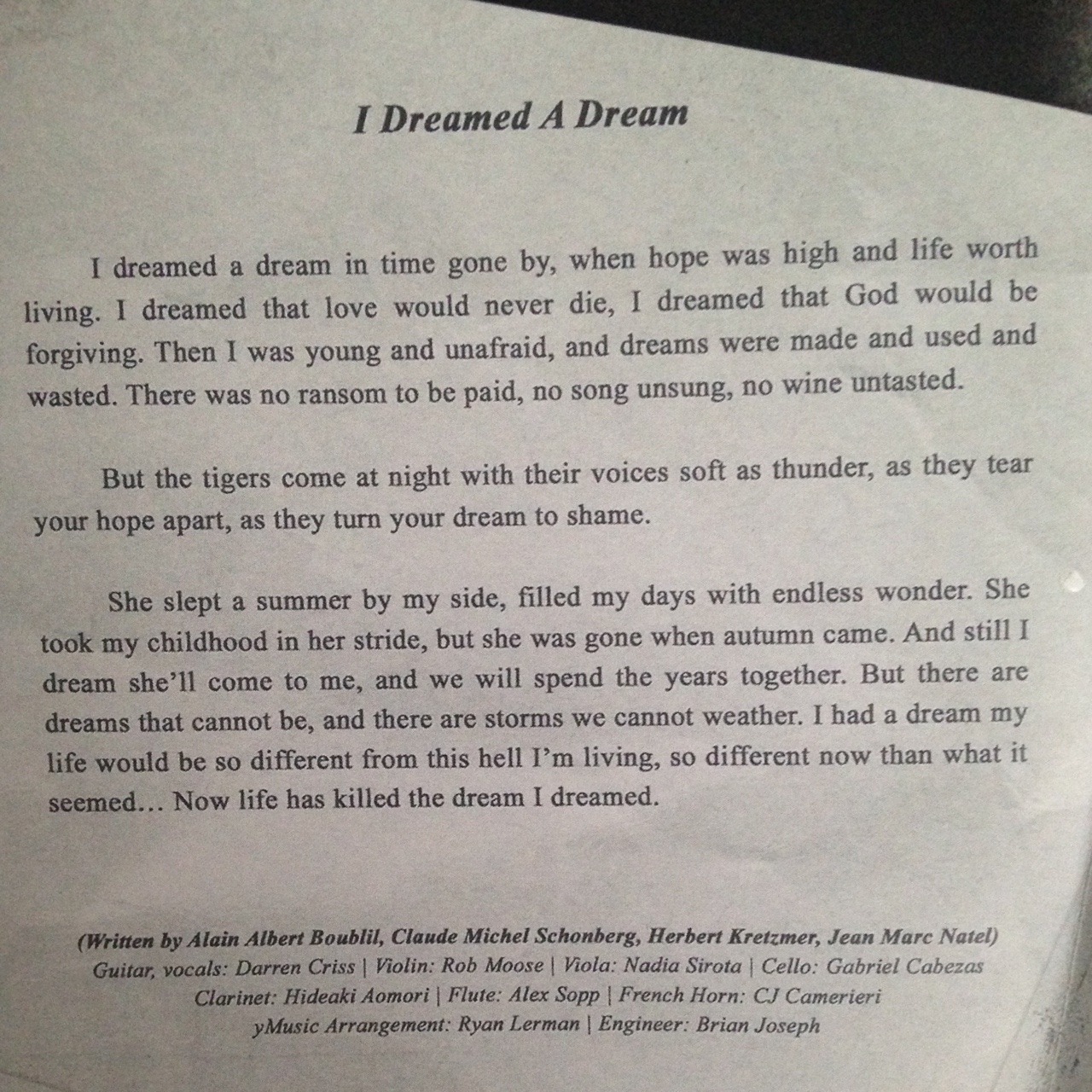 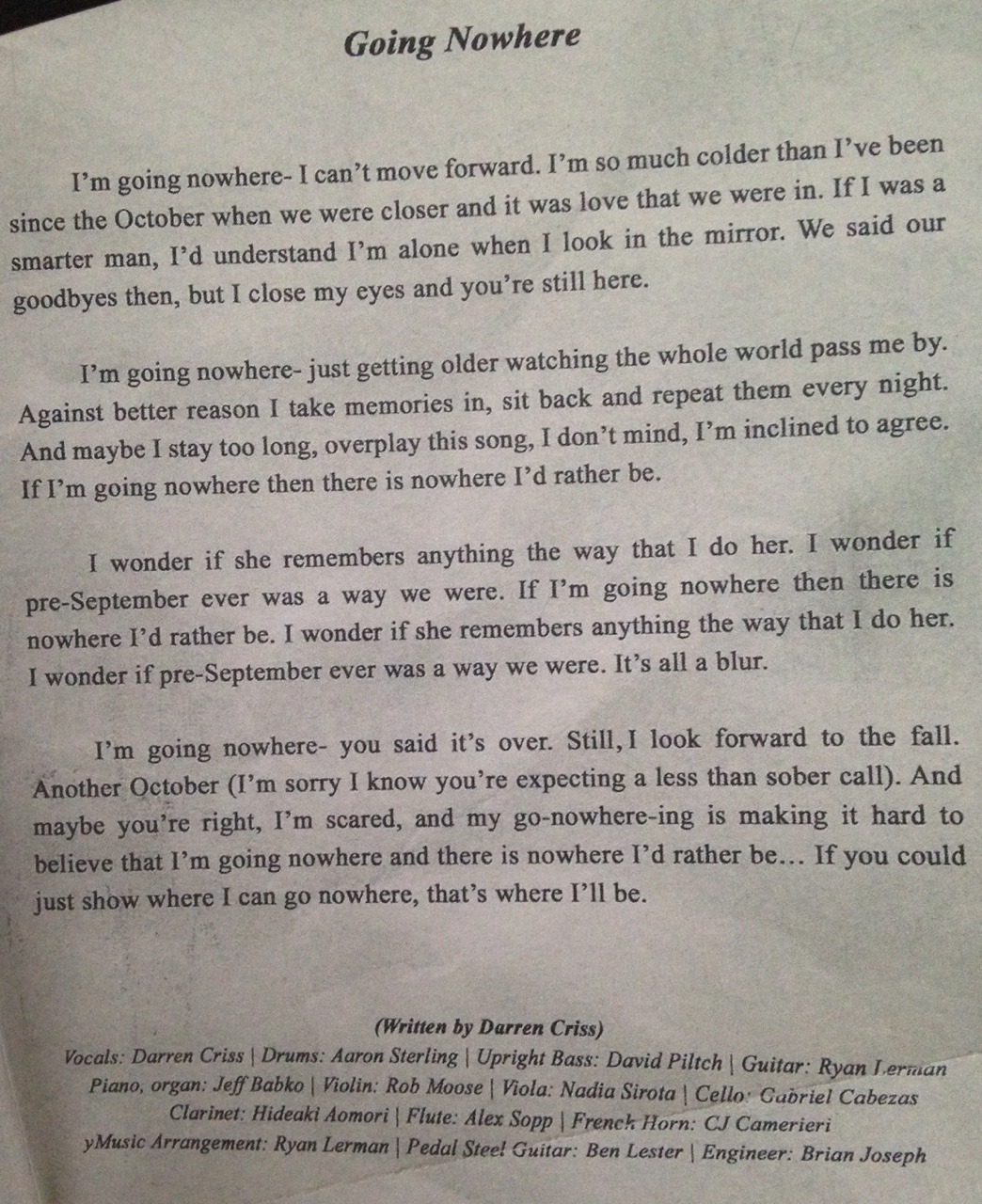 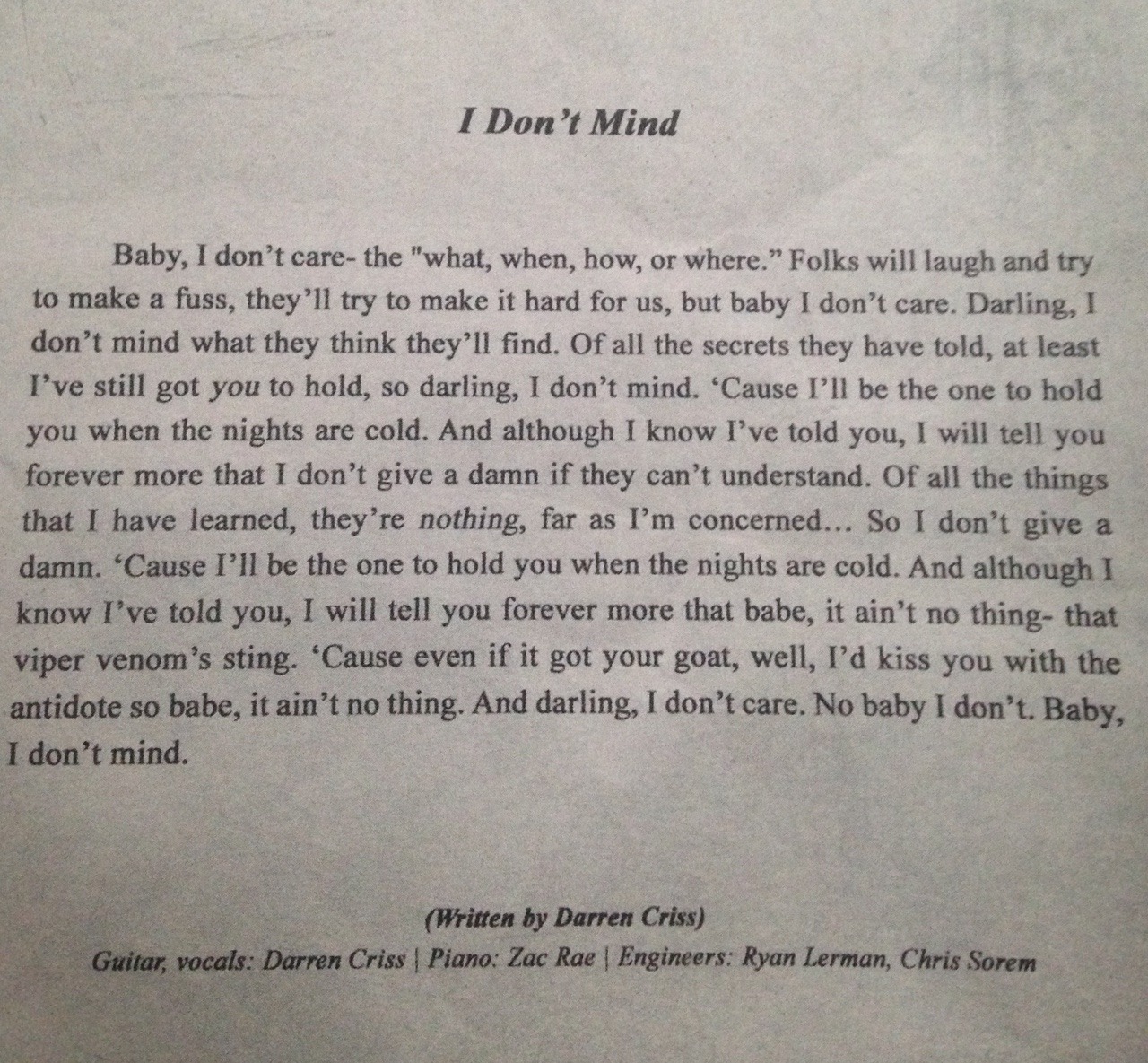 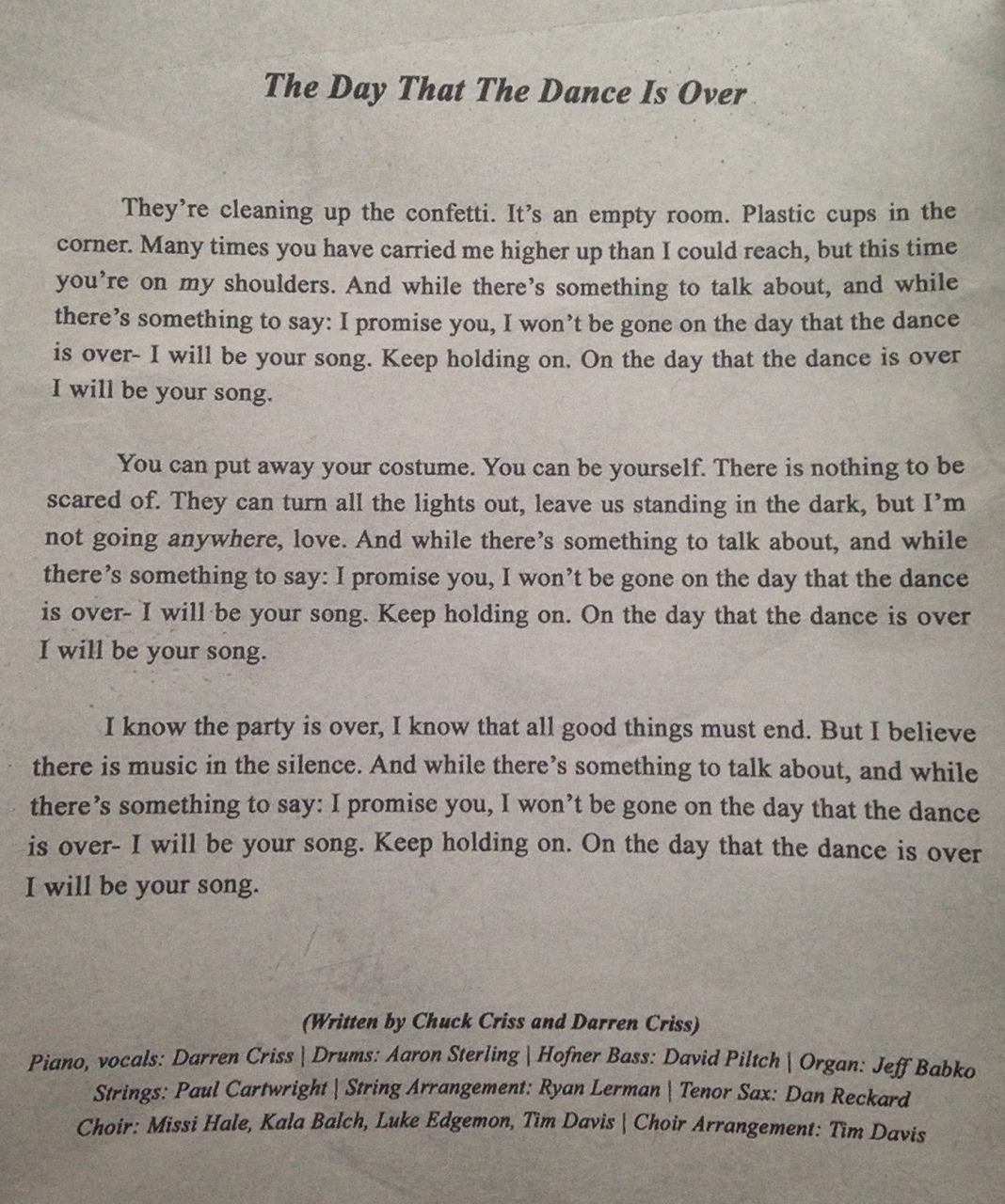 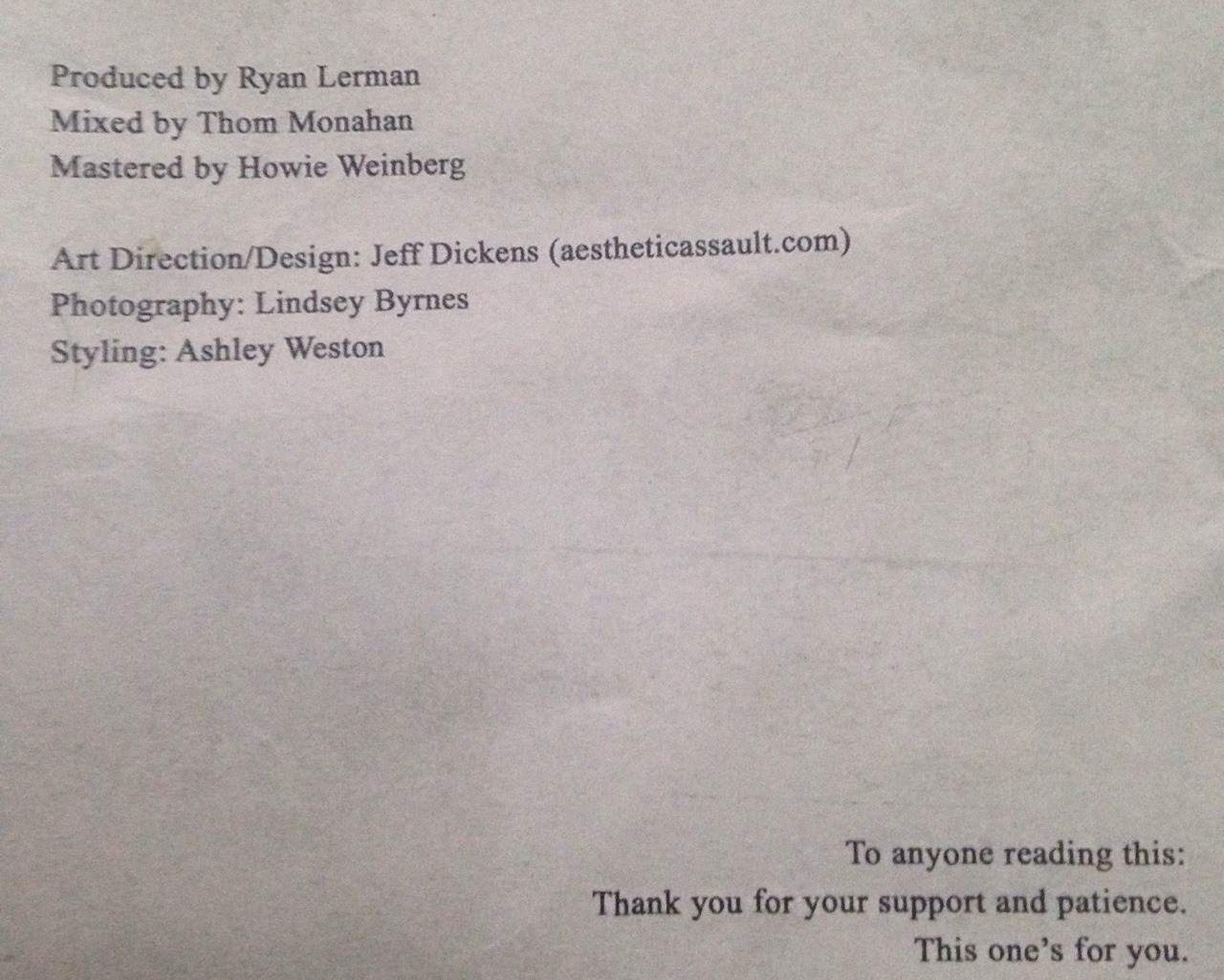 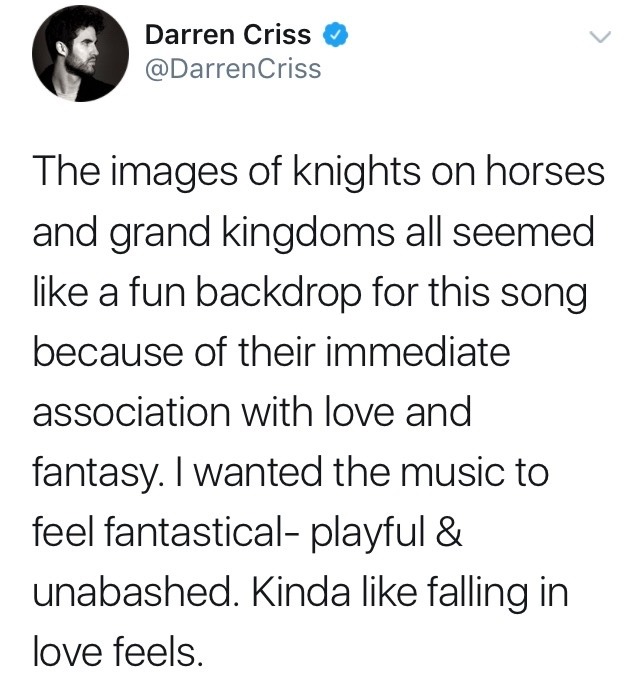 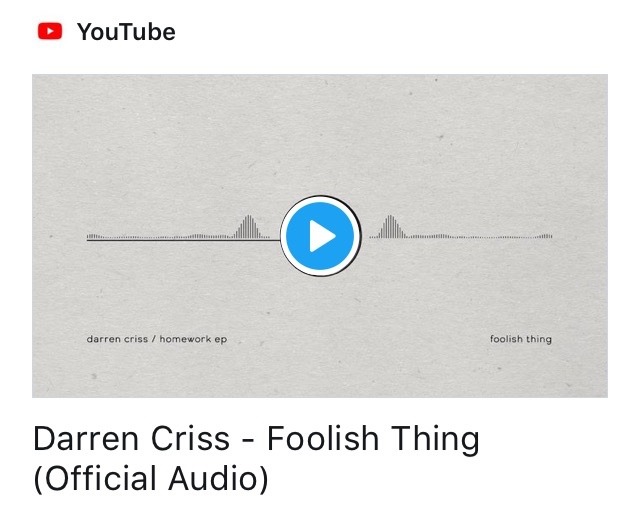 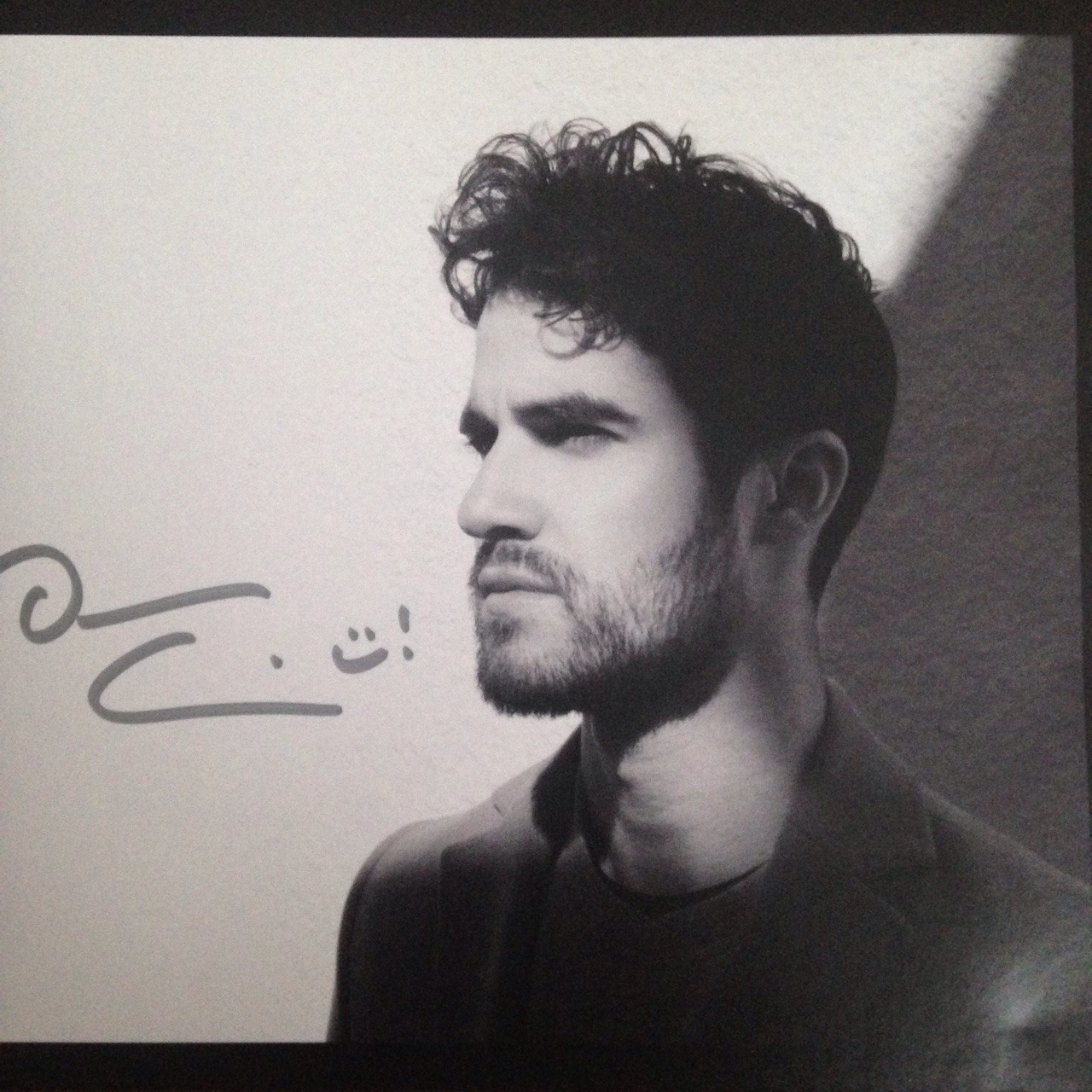 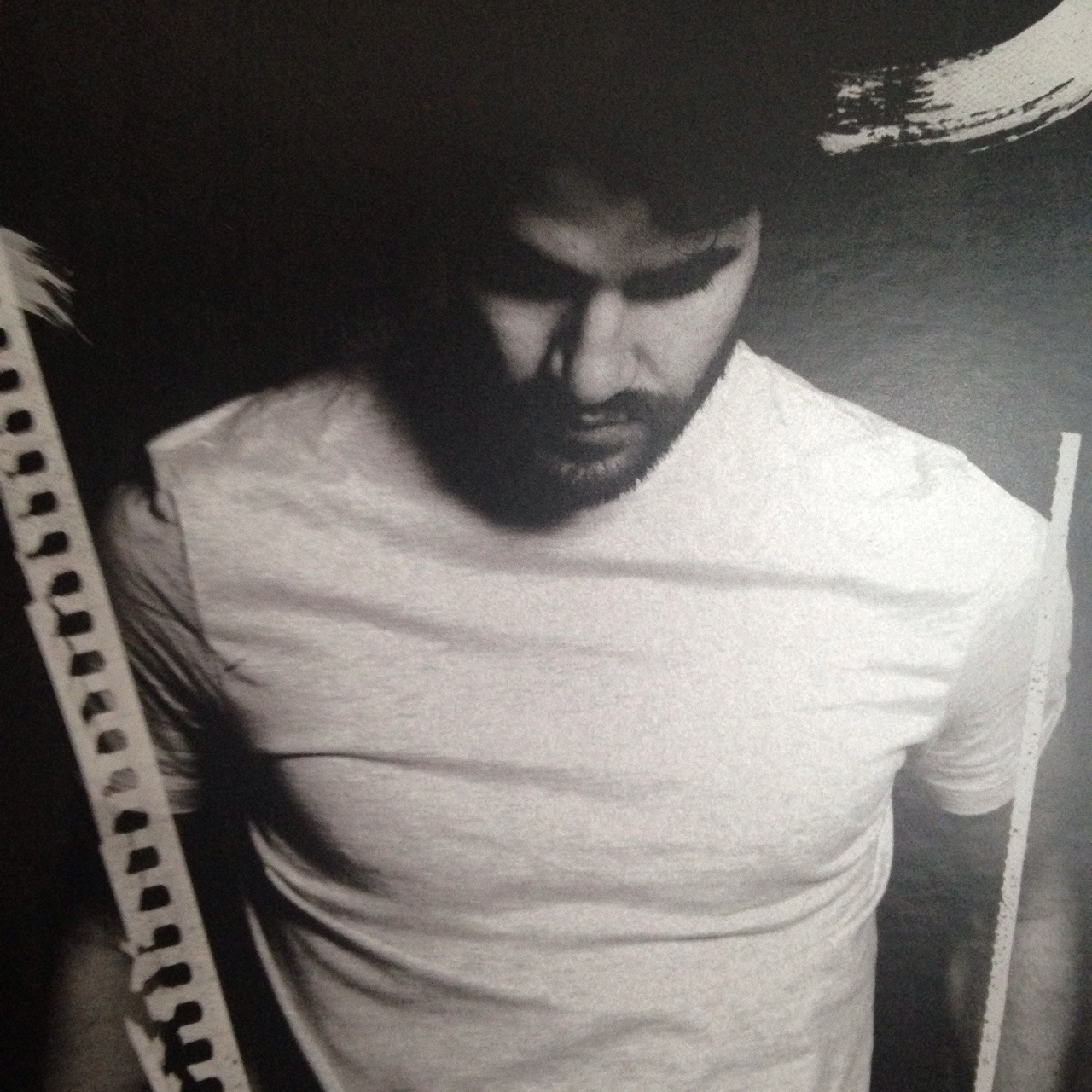 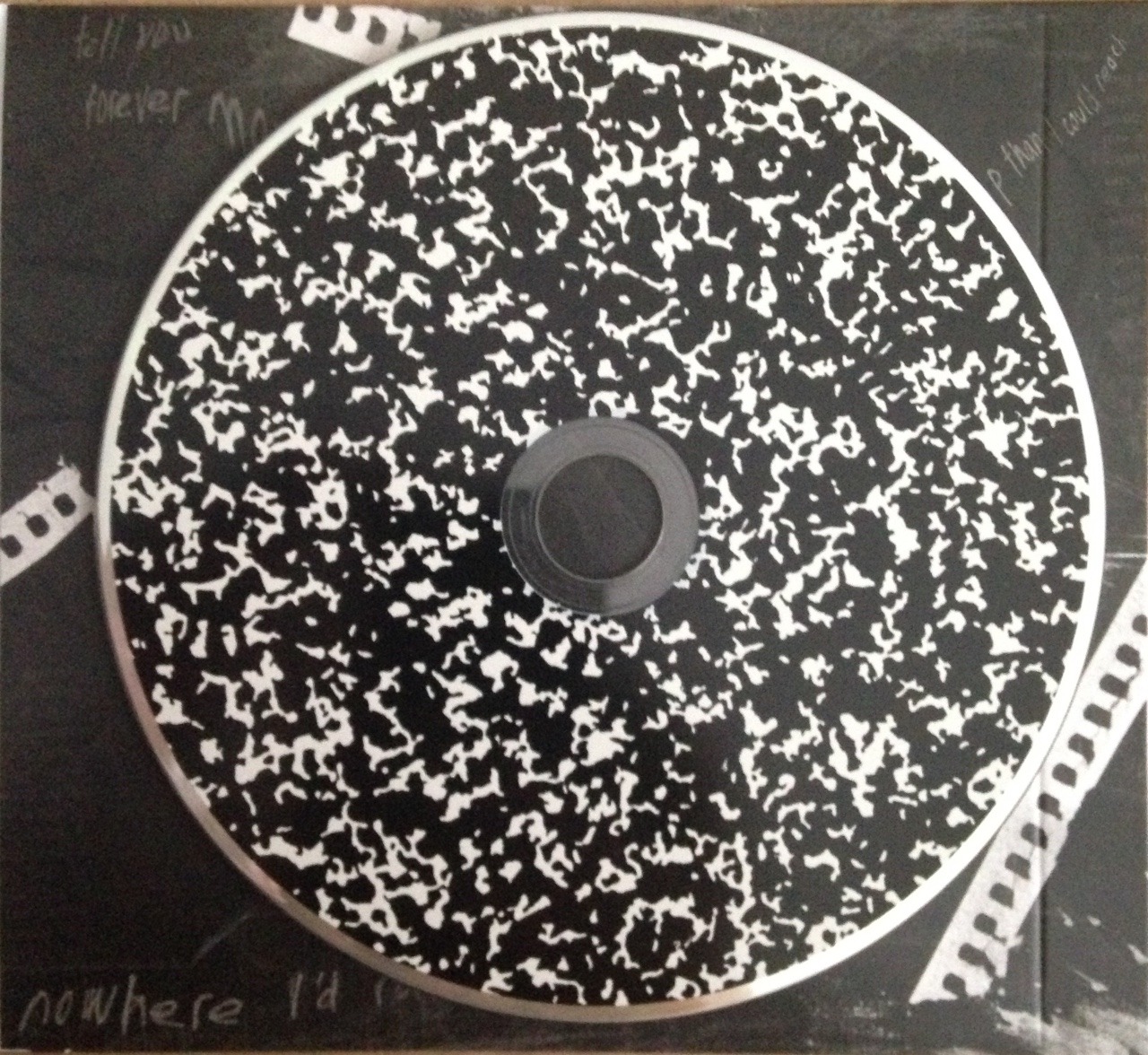 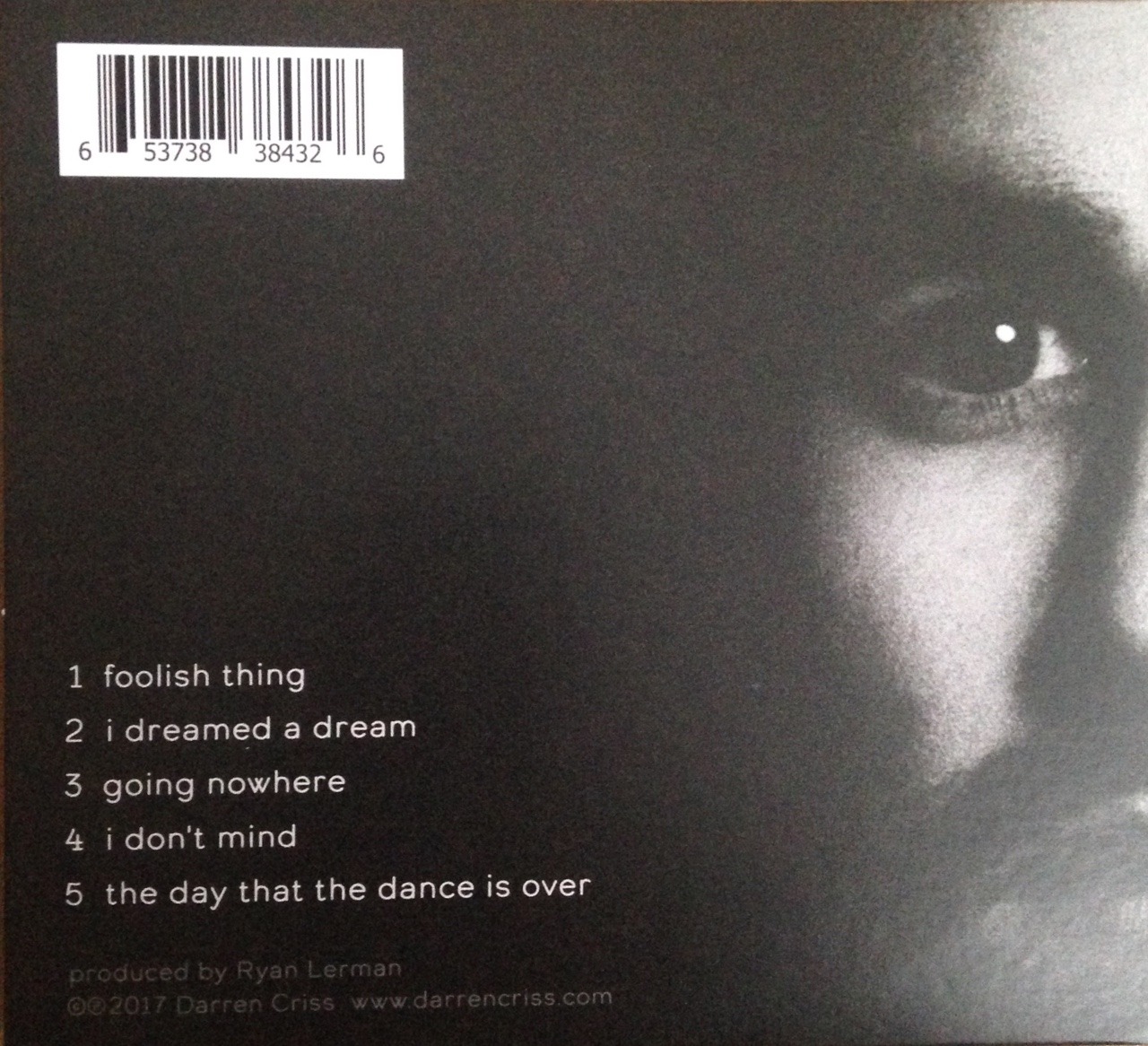 I love lyrics that have a "backdrop" and make us picture a specific world. Like "Castle on the hill" (Ed Sheeran) with the British countryside.

Me too, Jeremy.  It was fun to hear Darren's thoughts about knights and kingdoms as a backdrop for "Foolish Things." My Homework CD and bundle came in the mail today!

axs wrote:
Listen: Darren Criss sings of lasting love in 'The Day That The Dance Is Over' 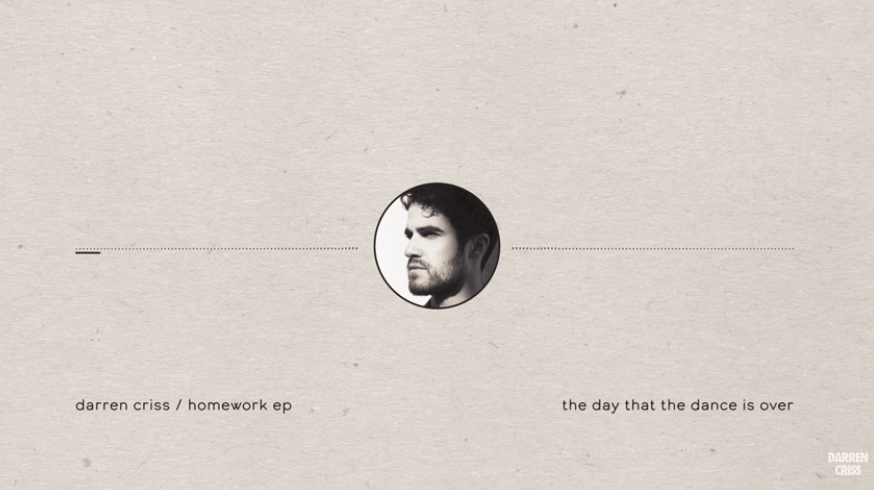 Darren Criss delivered a musical holiday treat to his large international fan base when he released his highly-anticipated solo EP, Homework on Dec. 15. The final track in the five-track collection is a sweeping piano ballad called “The Day That The Dance Is Over.” You can listen to the romantic song in the official audio release above. Criss sings of the kind of lasting love that remains long after the party has ended and “the day that the dance is over" in the ruminating track.

Overall, Homework serves up a sweet reflection of who Darren Criss is as an artist. His “I Dreamed a Dream” cover pays beautiful homage to his University of Michigan Theater grad roots and critically-acclaimed Broadway runs in “How to Succeed in Business Without Really Trying” and “Hedwig and the Angry Inch.” His stripped back acoustic version of the heart-wrenching “Les Miserables” theme song is simply stunning. The upbeat, medieval-themed lead track “Foolish Thing” feels like something we’d hear him sing in his cherished, award-winning role as charismatic and optimistic Blaine Anderson on “Glee.”

Furthermore, “I Don’t Mind” is a fun, acoustic guitar-driven song that carries a carefree, retro vibe. “Going Nowhere” is a melancholy song about mourning a lost love. While the song’s tone and subject matter is somber, the Emmy-nominated singer-songwriter’s vocals are notably sparkling and bright.

Homework is a follow up to Darren Criss’s recent Computer Games collaboration which spawned the fun, ‘80s-vibed Lost Boys Life EP with his brother Chuck Criss. The captivating YouTube video for the title track stars Gaten Matarazzo of “Stranger Things” and has garnered over 500,000 views to date.

Criss performed a Homework EP Release Show which streamed live from The Globe Theatre in Los Angeles on Dec. 15. He also posted a heartfelt thank you video to his fans via social media upon the EP’s release noting, “Thanks for all of your support, really hope you enjoy my humble collection of songs. This wouldn’t have been possible without you all. It would have continued to sit in my head w/ nowhere to go. Thanks for giving it a home!”

Homework by Darren Criss is available for purchase and streaming. Stay tuned to AXS for Darren Criss updates. 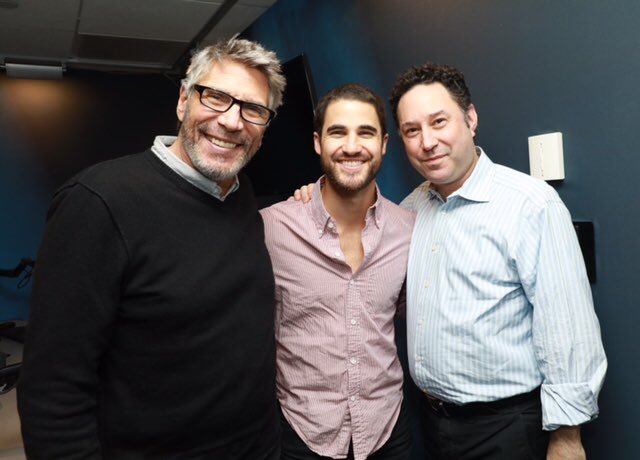 Did you miss @DarrenCriss on #Debatable? Don’t freak out! You can find this interview On Demand on the @SIRIUSXM App! 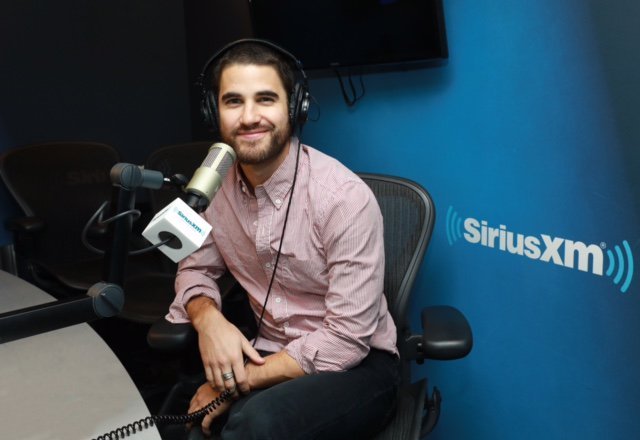 Tune into #Debatable 6pm ET, to hear our conversation with @DarrenCriss discussing his EP “Homework” and his upcoming role as Andrew Cunanan in @ACSFX : The Assassination of Gianni Versace.

I didn't have a chance earlier, to post this interview with SiriusXM Volume (better late than never).

Really fun interview! They talk about ACS and his EP. This was the best i could do in terms of sound quality. Hope it’s ok! This is such a sweet, heartfelt message from Ricky.  I had no idea the songs on the Homework EP were recorded in homes.   Truly a labor of love. As a fan, I'm so glad I was able to contribute in a small way to Darren--as an independent artist-- being able to record and release his music on this EP  while, as Ricky said, Darren remained true to who he is as a music artist. rockerrick: Holla! (Emo alert) @darrencriss is a truly prolific songwriter and lyricist. Recorded at his own home and the homes of others, this album showcases his sincerity as an artist and storyteller. Thanks to @ryanlerman for producing this EP and highlighting the honesty in Darren’s performance. Big thanks to the fans who allowed us to independently record and release this music, while staying true to Darren’s artistry. #homeworkep

Note:  This is the second time he was able to  chart on Billboard's Top Heatseekers Albums chart.    I believe he charted at 17 for his Human EP.   Source:  https://www.billboard.com/music/darren-criss/chart-history/heatseekers-albums/song/660631 julie_james: Before we ring in the new year, my xtra special co-host @DarrenCriss & I break down our fav theatre moments of 2017, PLUS an in-studio live performance from Darren’s new EP #Homework! Premiering 8 ET @sxmOnBroadway! This was nice of Tyler. I meant to post this earlier, but just ran out of time.

He sounds good.   "I Don't Mind" is such a lovely song, and you can hear the emotion in his voice.  I really like his version of that NSYNC song ("It's Gonna Be Me"?)
Track: The Coffee House on SiriusXM
Artist: Darren Criss

He looks cold; I know it's very cold right now in NY. SXMCoffeeHouse: coming up at 12pmET we’ve got @DarrenCriss in-studio for an exclusive acoustic session! Hear songs off his new EP #homework and an @NSYNC cover! Ch 14 Photo: @missmaro

Re: Discussion of Darren's Album