Please feel free to post your comments regarding general news about Darren in 2017 in this thread.

If you would like me to start a new thread (Topic) that is within the Category of "Let's Talk Darren Criss," please let me know. 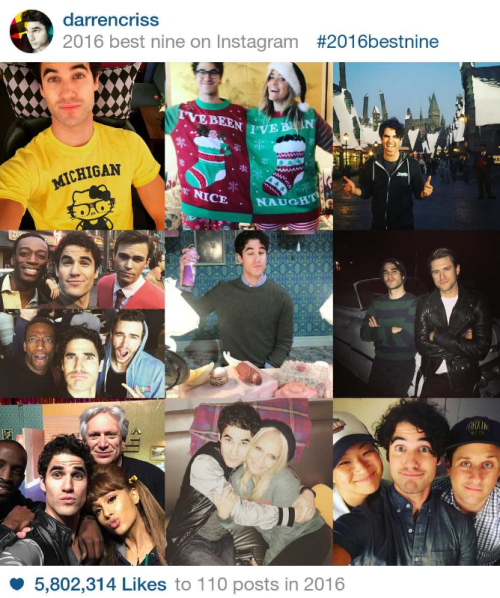 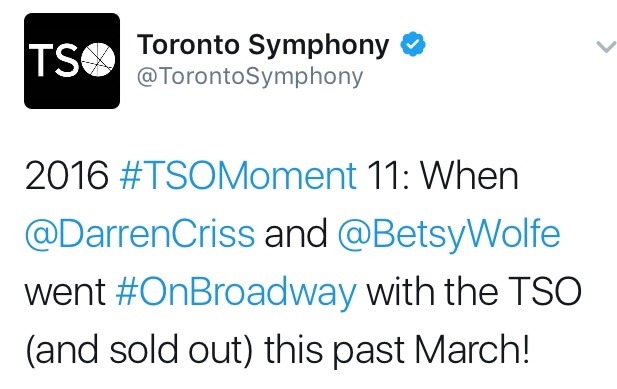 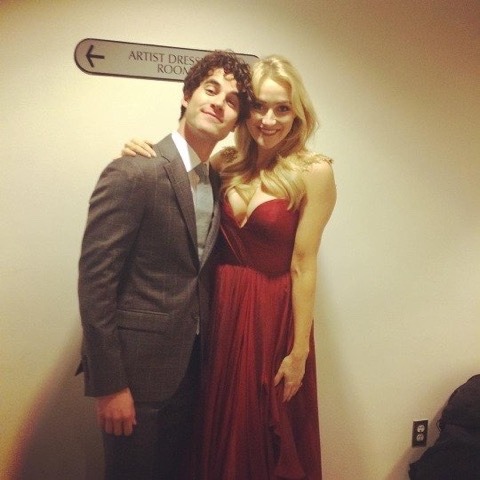 Hmmm.  That is intriguing.  I'm trying to reconcile that tweet from Perez Hilton and the issue of Royalties.   Either one on its own (going back to Broadway, or Royalties) would be great.  Maybe it is possible to have both?  I hope so!    It is strange that Perez is tweeting it, instead of the producers/director of a Broadway show or Darren.   I'm normally a cautious person, so I think I will wait for confirmation of this.  (No offense, Perez.)   But IF it is true, that Darren is returning to Broadway, that is cause for celebration!!

Thanks again for posting, blaykee!   It's always fun to speculate about what is the next project for Darren.

Note:  If it is true, about Darren returning to Broadway, I wonder if it could be  A Great Big World's musical, Strokes of Genius?

Guest
I'm scanning through Playbill's list of upcoming shows, and I'm not really seeing any good fits if it's a play and not a musical. It would be wild if it's Cursed Child, but Darren's in between the ages of Harry and James. Maybe the lead in Rear Window? I also saw speculation for Bombshell, the musical featured on TV's Smash, but I can't think of a person he could play in Marilyn Monroe's life story.

Oh, it's probably just his appearance at BroadwayCon later this month.

Thanks for researching upcoming new shows on Broadway for us.   That was helpful.   Aw, too bad Darren doesn't fit the age group for those characters in The Cursed Child.  I had no idea what the approximate age of the characters are, so that was helpful info from you.   Can you imagine how happy he would be if he got a role in that show?

I was thinking the same thing, that maybe it's BroadwayCon, and Perez didn't know that BroadwayCon isn't a Broadway musical/play.

Or maybe Perez is speaking loosely, and it's a workshop kind of thing, that isn't yet ready for a Broadway theater, but has aspirations of eventually opening up on Broadway.

This probably isn't applicable, but there have been recent tweets about Headless the Musical (the rock musical about Sleepy Hollow).

Some crazy talented people coming together for one night invited audience only epic event of our new musical on #January10th! Freaking out! pic.twitter.com/fJKBRmb55s

Bradley Bredeweg is connected to Headless the Musical (as the producer and director I think):


Yesterday (January 3) was the 5-year anniversary of Darren's start dart date for H2$. 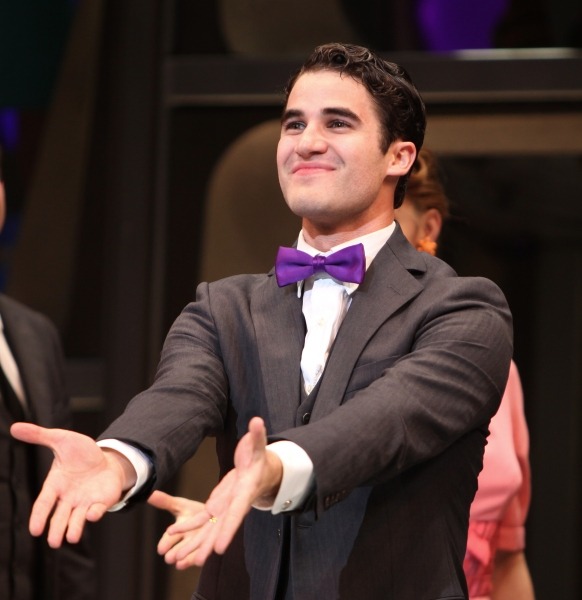 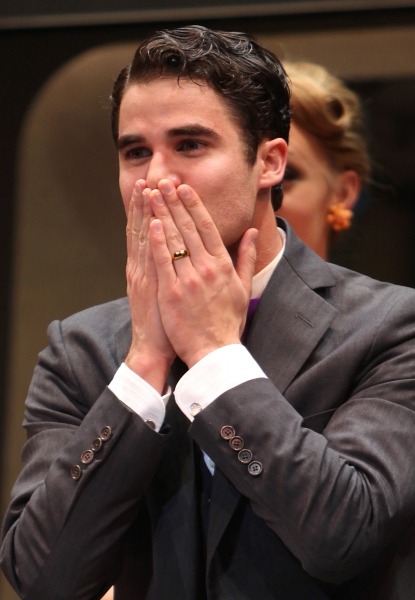 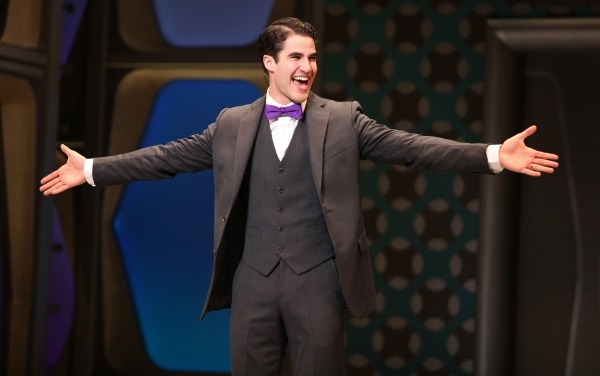 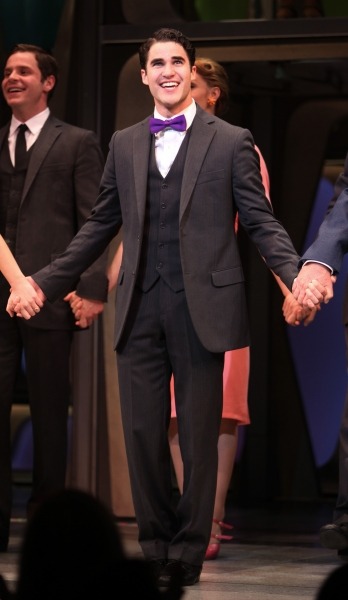 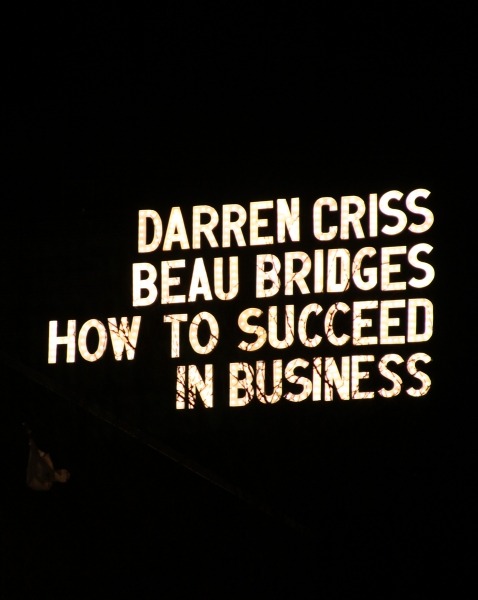 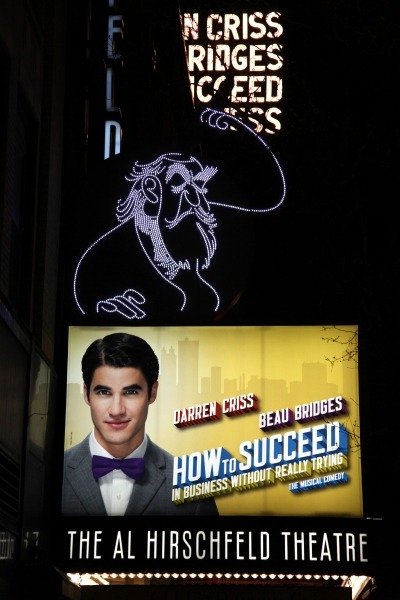 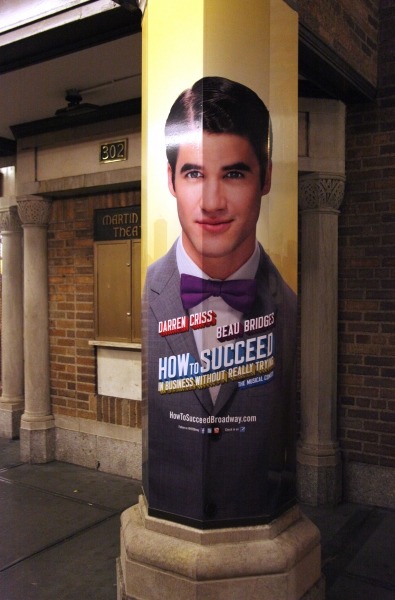 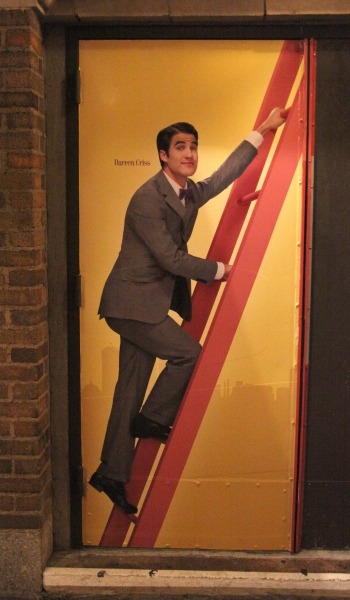 darrencrissarmy:
FLASHBACK January 3, 2012
Photo Coverage: Darren Criss and Beau Bridges Premiere in HOW TO SUCCEED IN BUSINESS WITHOUT REALLY TRY 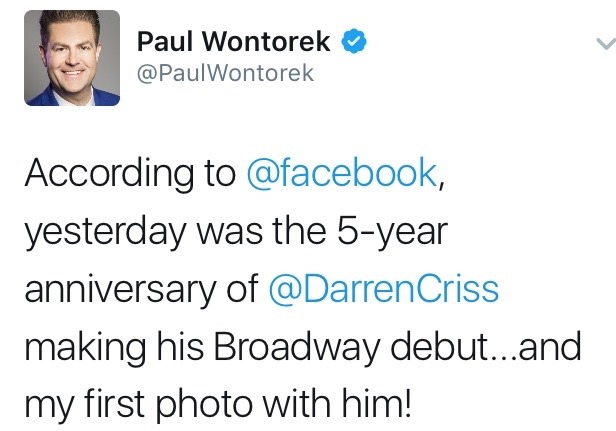 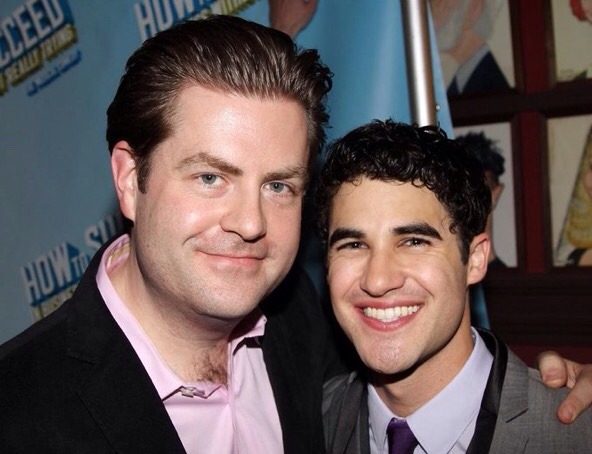 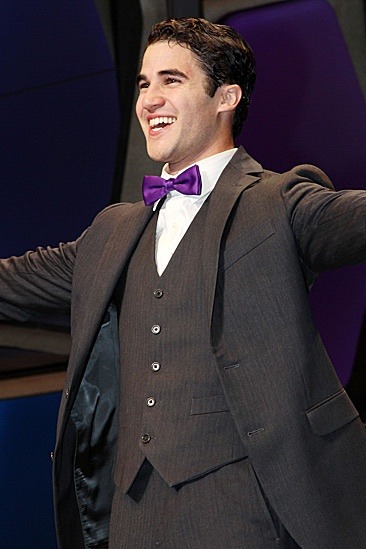 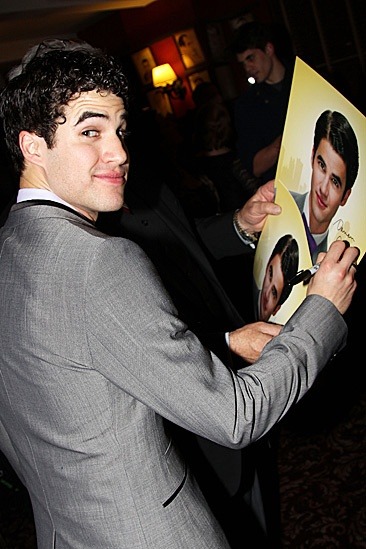 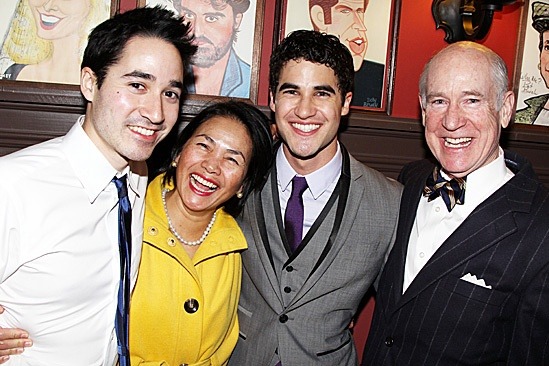 darrencrissarmy:
FLASHBACK January 3, 2012: Darren’s Broadway Debut in How to Succeed in Business Without Really Trying

“Thank you so much for something between ridiculous and sublime, and it’s been beautiful sharing it with all of you and with my beautiful family”
Source: evarren
via DarrenCrissNews


Aw, a close-up gif of how choked up he was during his closing speech.

Look at this cute promotional pic: 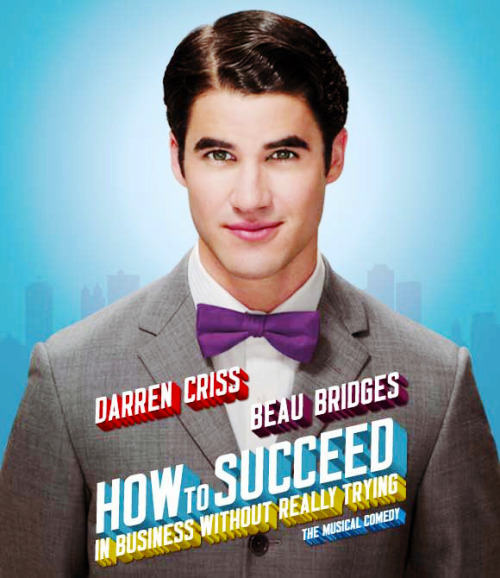 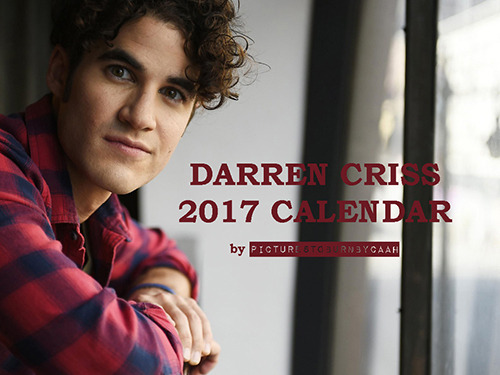 Since I haven’t seen any Darren calendars for this year, I decided to made one, woops. They are inspired by @gleeddicted​ ones and are 1024x768 (Google said it’s the most common size, but I plan on doing a bigger version soon, I just wanted to put this out asap)

If you find anything wrong on them, or want to give me a shoutout on proportions or something, any suggestions… This is my first time doing this, so… My askbox is always open!

If you download it/liked it, please reblog the post, so other people can see it and I can get a feedback from you guys! It means a lot for me. Thanks :  )

Please do not repost them without credit or claim as your own, I didn’t put a water mark or anything similar on them. Also, I don’t own any of the pictures, just found them around the internet. 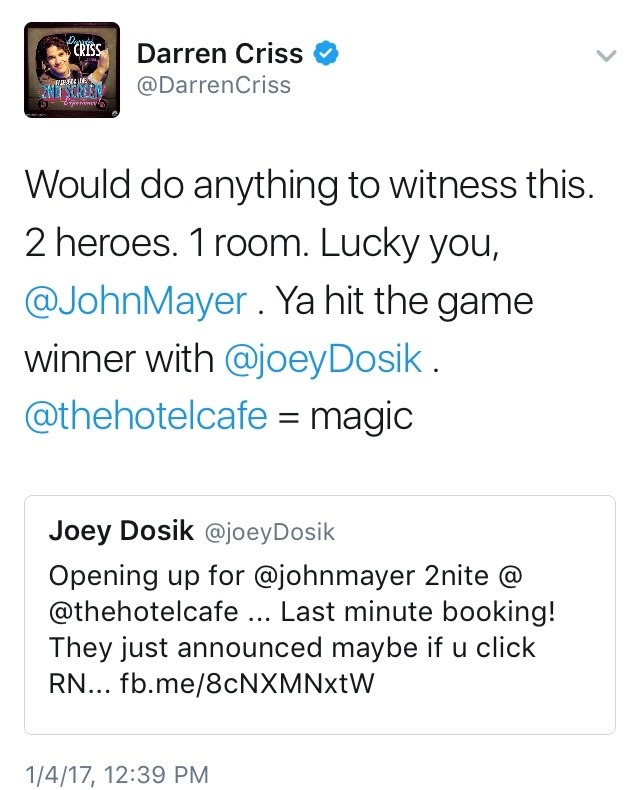 Five years ago this week @DarrenCriss made his Broadway debut in How to Succeed in Business Without Really Trying back in 2012. Since then he’s strapped on heels for Hedwig and the Angry Inch and made appearances all around the theatre world hosting the 2015 Tony Awards Red carpet and at Elsie Fest!


This site is interesting.    It is an official program of The Broadway League, and it states it is "the only place where you can get connected with ALL Broadway shows and theatres through their social media!"

A video of the closing speech :

Thanks Jeremy for posting that video.  Aw, his voice cracked when he mentioned his beautiful family.  You can tell even at the beginning of the video that he was fighting back tears.

Darren is showing his support for Theo Katzman's new album.


And he wished a friend Happy Birthday.

(It's been a long time since we've seen Darren with a beard, hasn't it?    He looks good.) 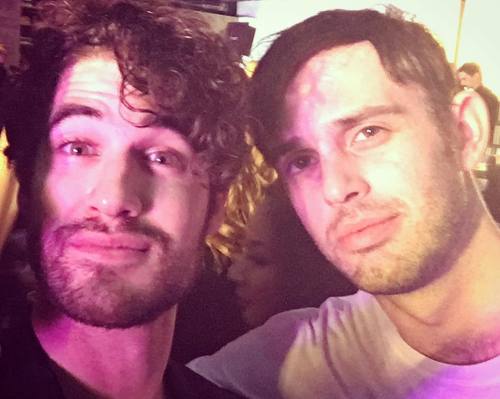 darrencriss: Wishing my craziest friend @cadehudson22 the craziest 30th bday today. Wish I could be there with ya right now to celebrate, bud… Happy Birthday Cade , ya made it!

Nice pic.  Hope they are having fun.  I like how colorful their ski clothes are (including what is on Darren's head.  Is that a head band?). 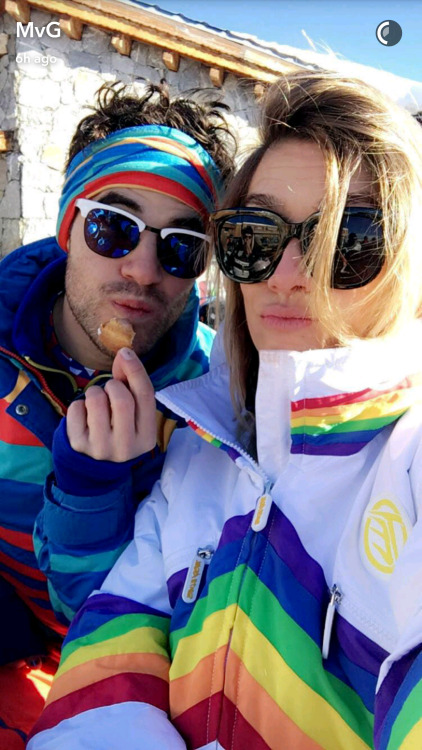 
Is Darren in England right now?  dusty, do you hear this? 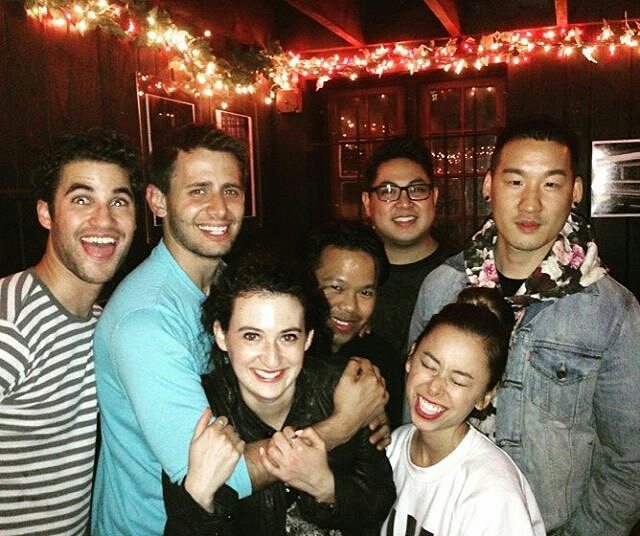 Congratulations, Benj!!!!! There’s a reason I haven’t been able to stop singing the soundtrack to La La Land… #goldenglobes2016 http://ift.tt/2j7YryJ

Sorry I didn't do this earlier, but I opened up a new thread for Royalties (the TV project connected to Darren).

ha!  Benj is cute (and you can see how touched he is with his Golden Globe win) and goofy Darren. 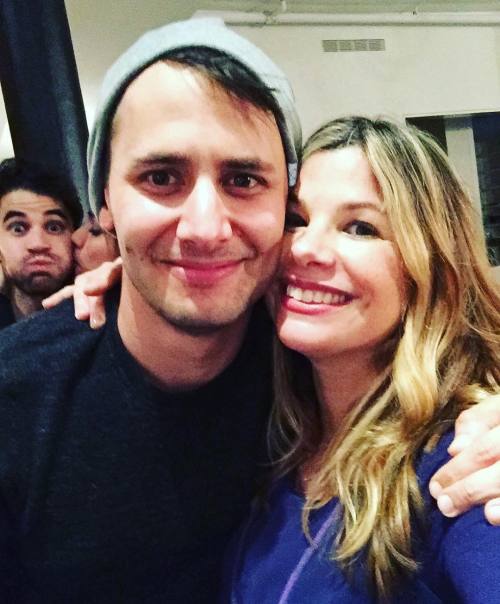 rebeccasoffer: Still recovering from my “holy cow I’m so pregnant what am I doing out at 12:30 am” jaunt. But worth it to hug our La La Land Golden Globista! Plus, a pretty adorable photo bomb.

Darren Criss: The Song is The Song

Unless you're what they call a "millennial," Darren Criss may be a new name for you. But this excitable heart throb who made it big on the hit show Glee and starred Broadway's Hedwig and the Angry Inch, has a mature appreciation for the music. His love for the music is actually so deep that despite having a full day of rehearsals and a slight fever he came down to Naked American Headquarters to talk at length about Chet Baker, Jack Jones, and the immortal importance of the Rat Pack.


In the course of their chat, Darren compared Cole Porter to Carly Rae Jepson, and wondered aloud why he hasn't recorded more Radiohead covers. Host Julian Fleisher and Darren also did a little impromptu harmonizing on Darren's favorite of his own compositions, one he hopes to enter into the Naked American Songbook.

Guest
Max Adler hung out with Darren this morning: 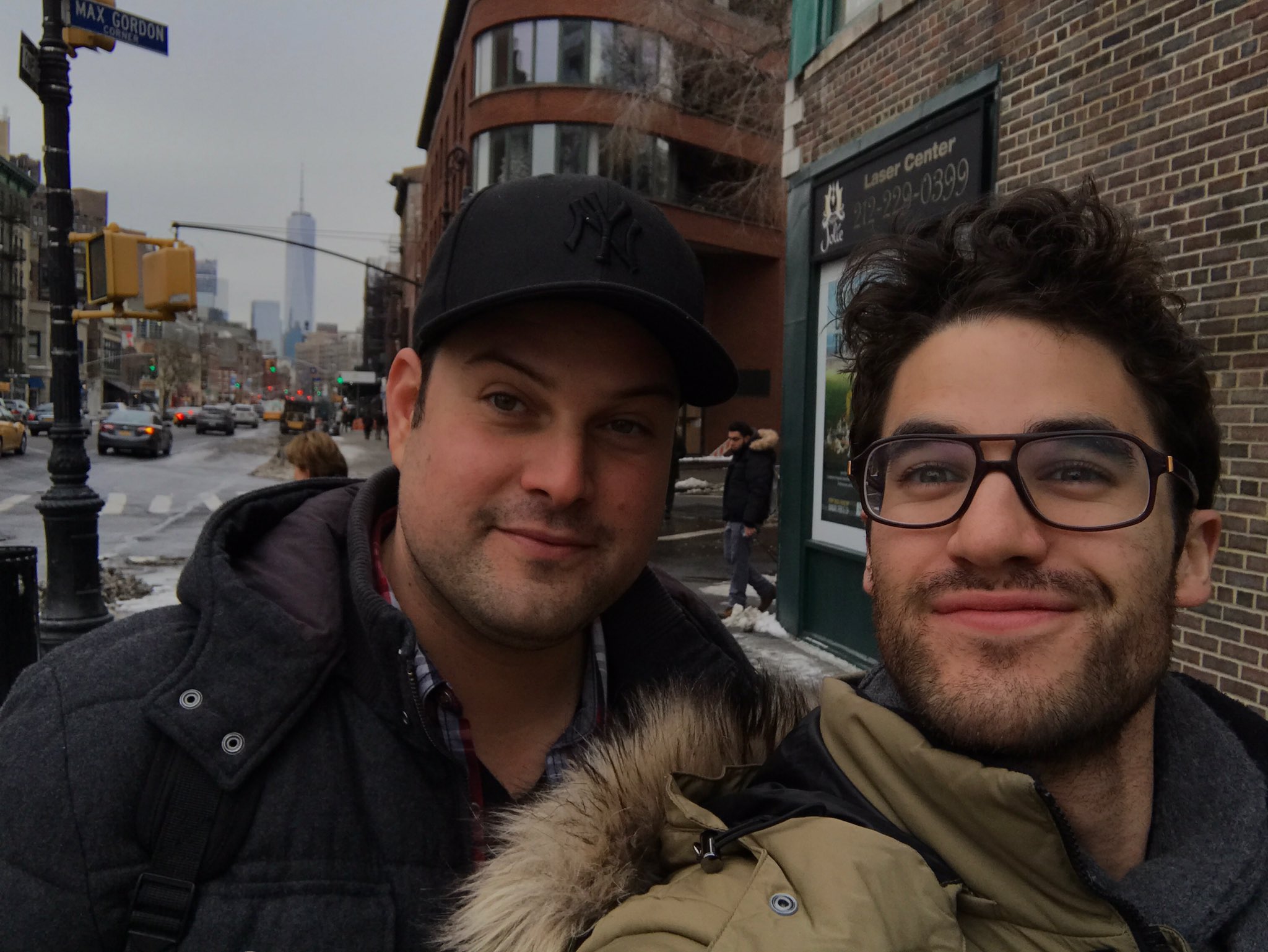 @Mr_Max_Adler: Always a blast hangin with this guy in NYC

Two handsome men on a dreary NY morning. Darren's almost at peak attractiveness here (to me, at least) and Max looks serene.

Aw, that's a nice pic.  Thanks for posting, DaisiesAndLilies.  Max looks good, but serene (probably because he's been out with Darren since last night and hasn't slept a wink.

).    Darren looks good too (he's used to not sleeping

).   DaisiesAndLilies, you prefer some scruff, huh?

He looks good both clean-shaven and with some scruff.  It's amazing how different he looks with short hair vs. long hair, and clean-shaven versus with a beard.  He looks younger (to me) when he's clean-shaven.

Yup, two handsome men, with a lovely supportive friendship.  Max went to see Darren not only in How to Succeed in Business without Really Trying on Broadway, but also saw Darren in Hedwig and the Angry Inch on Broadway AND saw Darren when Darren was at the Pantages Theatre (Los Angeles) for the HATAI tour.  What a true blue friend.

And Darren went to the premiere of the film, Sully, which starred Max (also starred Mike O'Malley).

This is a cute pic of all three guys. 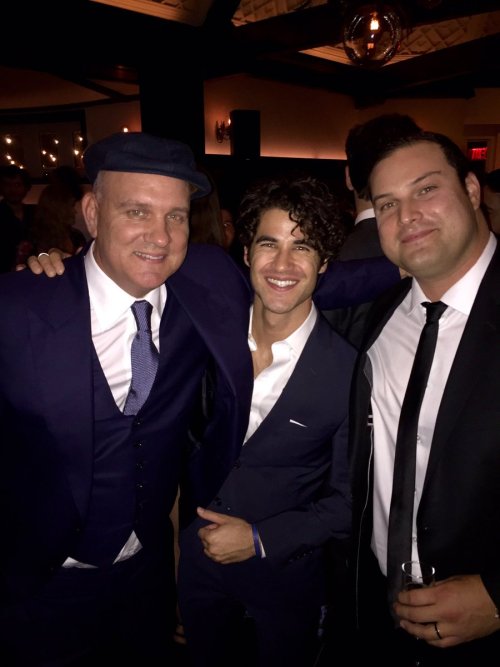