Later tonight is WordTheatre's "In the Cosmos" (Saturday, August 26)!   If you are in Los Angeles, buy your tickets now! SterlingKBrown: Come join us for a great evening of live performance.   Tickets

Playbill wrote:
Darren Criss, Bellamy Young, and More Tapped for In the Cosmos


WordTheatre has revealed the roster of stars that will perform in the one-night-only benefit presentation of In the Cosmos at Los Angeles’ Ford Theatres August 26. The show will bring to life the story of the universe—from creation myths to the Big Bang to alien life forms—accompanied by live renditions of classical and contemporary music.

In the Cosmos is created, directed, and produced by WordTheatre Artistic Director Cedering Fox. Proceeds will benefit WITS: WordTheatre in the Schools.

WordTheatre is dedicated to bringing the world’s best contemporary literature to life in front of an audience. For more information visit WordTheatre.com.

I thought this was a clever use by a literary site, @The_Millions.   The pic is from a early Glee photo shoot (don't remember when).  Darren has good balance.

The_Millions: It’s Tuesday! What new releases are on your list themillions.com/2017/08/tuesda…

Some pics of Darren and Mia this weekend.


This is cute.  Reminds me of that "wombat" pic (I think that Mia had posted before).  Happy birthday to Mia. I can't quite make out the name of where Mia says they are?  (I hope they are not there anymore, because you know . . . ).  ha!  I like the sound effects from Darren.  It looks sorta futuristic, with the dome structures.

She says "the Integraton".

Thanks Jeremy.  And thanks for the link.  Funny and weird and sci-fi.   I didn't even know about it, although I've been to Joshua Tree.  One of these days, if I'm in the area, I'll like to visit.

On a different topic, I know in the last couple of days, there have been a few videos and pics posted with Darren in the background.  I've always been a person who highly values my privacy, so my policy is to try to respect Darren's privacy too.  It's my policy to not post pics or videos, where it's not clear that Darren even is aware he is being photographed or videotaped.

I'm guessing he's aware of at least some of those pics/videos'  public posting, and if he really wanted to, he could ask to have them taken down.  But still, my preferred policy is to not post them, because it still remains that filming him or taking photos of him without his clear agreement in the first place, makes me feel a bit uncomfortable (again, even though, he may not want to go to the trouble after the fact, of asking every friend or acquaintance who does this to please refrain).  On this issue, Darren Criss Army and I seem to agree.  Just something to keep in mind. 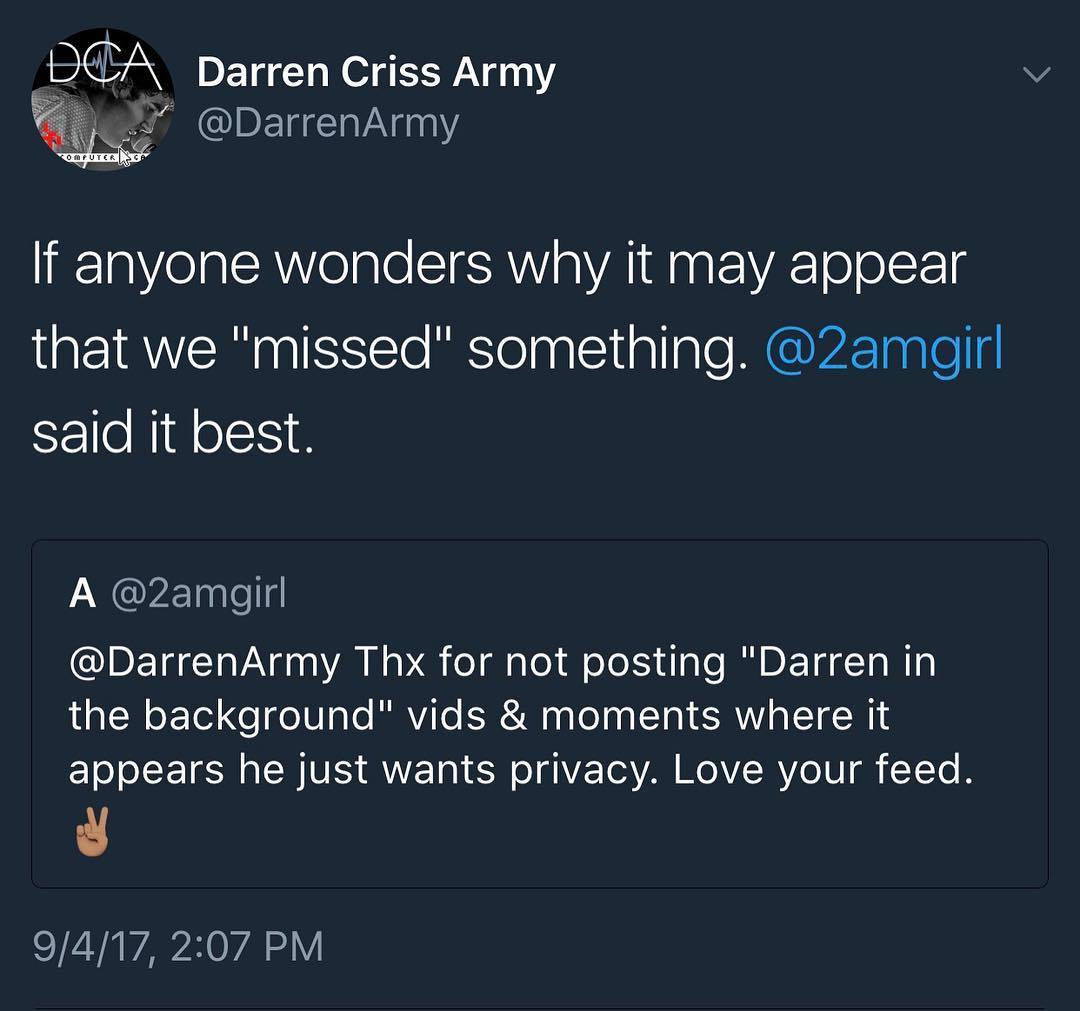 Someone brought up an important subject on twitter. Something to take note of if you wonder why we didn’t post something you may have seen somewhere else. This is why. : )  http://ift.tt/2vZP09K 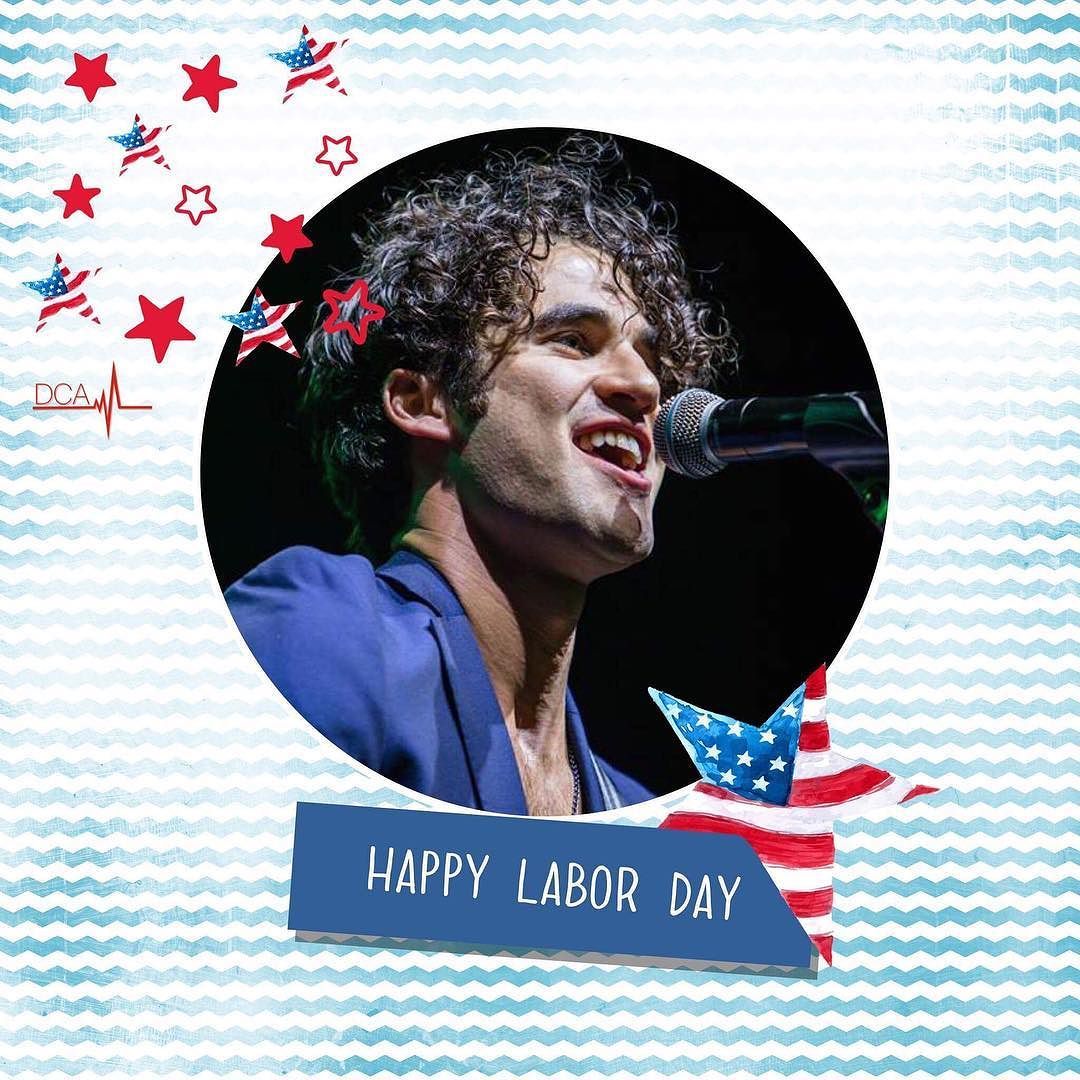 Thank you to ALL who fought for our rights, so we can be free to live our dreams! #HappyLaborDay #ElsieFest http://ift.tt/2wytXij 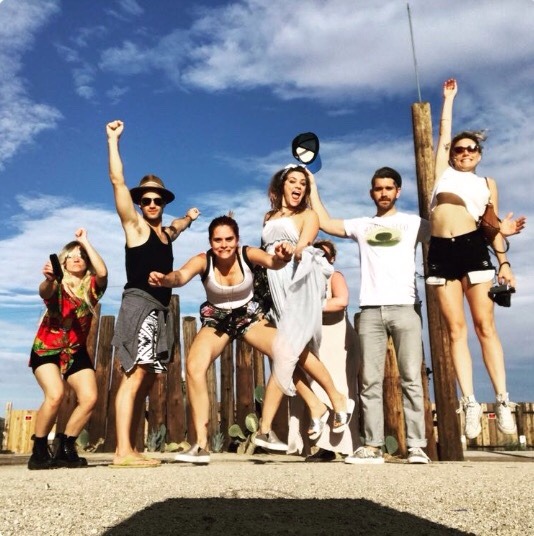 *For tickets for ELSIE FEST go to:

Cute pic.   They both look lovely.

(But why is Darren publicizing where they are staying??)  Since he tagged La Vida Loca, is this for Versace filming?   Or are they finished filming ("cut")?  Have fun! darrencriss: These past several weeks and have been so crazy & busy for us… really been looking forward to a fun weekend in Vegas. This is gonna be funnnn… @palazzovegas #cut #LaVidaLoca

Great pic. I thought the shooting was over but it may be a false memory lol. As "la vida loca" means "crazy life", it could be a reference to Vegas' way of life, though.

Let us know, Jeremy, if you read any new news about Versace filming.

I remember Darren saying something to the effect that he'll be working on Versace for most of the year.  But some of that time may be post-production?

I read on Gleekto's blog that Ricky Martin was/is performing in Las Vegas (hence Darren's tag of "#LaVidaLoca").   So it's possible Darren and Mia were there to see Ricky Martin's show?

When I catch a show at the Pantages Theatre in Los Angeles, there is always parking reserved for Barry's Bootcamp in the parking structure that I use.  Maybe one day I will see a headbanded Darren walking out to his car.

Darren does look a little tired here.  Good for him for keeping in shape! calebfoote: Ropp threw up right after this photo was taken

Posting this just because it was posted publicly on a BroadwayWorld.com article. Not sure how reliable is the info about Darren being in this production of Leveling Up.   But it is fun to talk about.

Darren Criss Army wrote:
Regarding BroadwayWorld's mention of Darren and Leveling Up

There is no other mention anywhere on the internet of this play coming to Broadway, no evidence that it is planned in any way, let alone imminent. IF this is something that may happen, it has not been confirmed or in any way officially reported. Yes, it’s exciting to think of Darren being back on Broadway, but please take these rumors with a grain of salt, since that is really all they are. Rumors. Should there be an official announcement regarding this project or Darren’s involvement in it we will be sure to let you know!

Wendy is set to direct the Broadway production of Leveling Up with Darren Criss, produced by Tom Viertel and Richard Frankel.

I believe this weekend is the iHeartRadio Music Festival in Las Vegas.   Guessing that Darren will be there.  Maybe he'll see his friend, Tom Poleman there as well.

Elsie Fest is just about a week away!  Buy your tickets!

I wonder if any of the other performers beside Lea are doing VIP packages?

Elsie Fest is only one day away!  Buy your tickets! Some nice pics of Darren and Mia at a friend's wedding.

(Please note I discourage posting of videos/pics where it is not clear if Darren is aware he is being videotaped/photographed, even if videotaping/photo-taking is done by a friend or acquaintance and then posted for the public.)

Cute pic.  Love the brilliant colors that also leap at you (including Darren's socks).   I also like Mia's tatoo (is that a butterfly?). zachzagoria A wedding? I love weddings, drinks all around!

You may want to visit this thread for general directions on how to do certain functions on this forum:  Some General Instructions on How to Use This Site

Please PM me if you have any questions.


:DRYVRS appears to be a web series that premiered in December 2015.  "Inspired by services like Über and Lyft, :DRYVRS is a new YouTube series that follows creator Jack Dishel as he meets and interacts with bizarre drivers through a ride-sharing app."   http://ew.com/article/2015/12/17/macaulay-culkin-dryvrs-web-series/