It is really short, isn't it?!

Doesn't it look like the bottom right pic?   But that source was dated back in May 2017 (when he definitely still had his curls), so he was wearing a wig for this pic. 
The comments from friends to Darren's new haircut pic are funny. 
I'm surprised there are not more wise-crack jokes from his StarKid friends.

Also, Darren was at the Ahmanson Theatre for a show.

One thing about people who have very short hair; it really brings out your facial features more.  Darren's eyes seem to be more prominent now. bsaporsantos: idk how but i saw @DarrenCriss at the ahmanson

He is looking a little tired around the eyes.  I wonder if that is on purpose (assuming this is for Versace filming)?   (Instructions to Darren from Versace powers-to-be:  "Don't sleep so that you look tired!"

haha.  Probably not for filming, then.)   It's probably just because Darren likes to be out and about . . .

Guest
I'm sure it's for ACS, but that is definitely my least fav hairstyle for Darren.

It's interesting though, this is now one of his most liked posts on Instagram (only behind that sunburn selfie and the pics with Melissa and Grant from the Supergirl/Flash sets, which naturally got more attention), so the more casual fans don't seem to hate it as much.

It's not my favorite haircut/hairstyle either.  It's interesting what you said Lin, about the number of Likes on that instagram.   Could be because folks are very excited about seeing him on Versace (I know I am!), or maybe folks really do like this haircut (how dare they!).


Aw, this is cool.  Wishing Darren and Mia many, many nights singing beloved show tunes at the top of their lungs.

Both this pic and the next pic really do show how with his new "do," Darren's eyes really pop. a_blanchet: Darren and Mia’s new piano bar in Hollywood @trampstampgrannys. What a night tho…

This fan has such a sweet smile.  Love her cute hair.

(My mom used to do my hair that way when I was a little girl.

) At the Ahmanson Theatre for "Bright Star." atmichellee: I pointed out @DarrenCriss while seeing bright star but in reality he’s was the bright star. Lowkey he’s my long lost brother


Broadway.com wrote:
The Fans Have Spoken! The Top 10 Ryan Murphy Favorites You Want to See on Broadway

What’s curing our case of the Mondays? The fact that the finale episode of American Horror Story: Cult is tomorrow, that’s what! Stage-and-screen star Cheyenne Jackson spent some time with us last week on Show People with Paul Wontorek, and we’re still recovering from that steamy casting for The Boys in the Band. Basically, the Broadway.com staff is obsessed with the performers in Ryan Murphy’s entertainment realm. We asked you which Murphy favorite you’d like to see on Broadway, either in an epic debut or welcome return. Eight returns, two debuts and one Tony winner made your top 10. 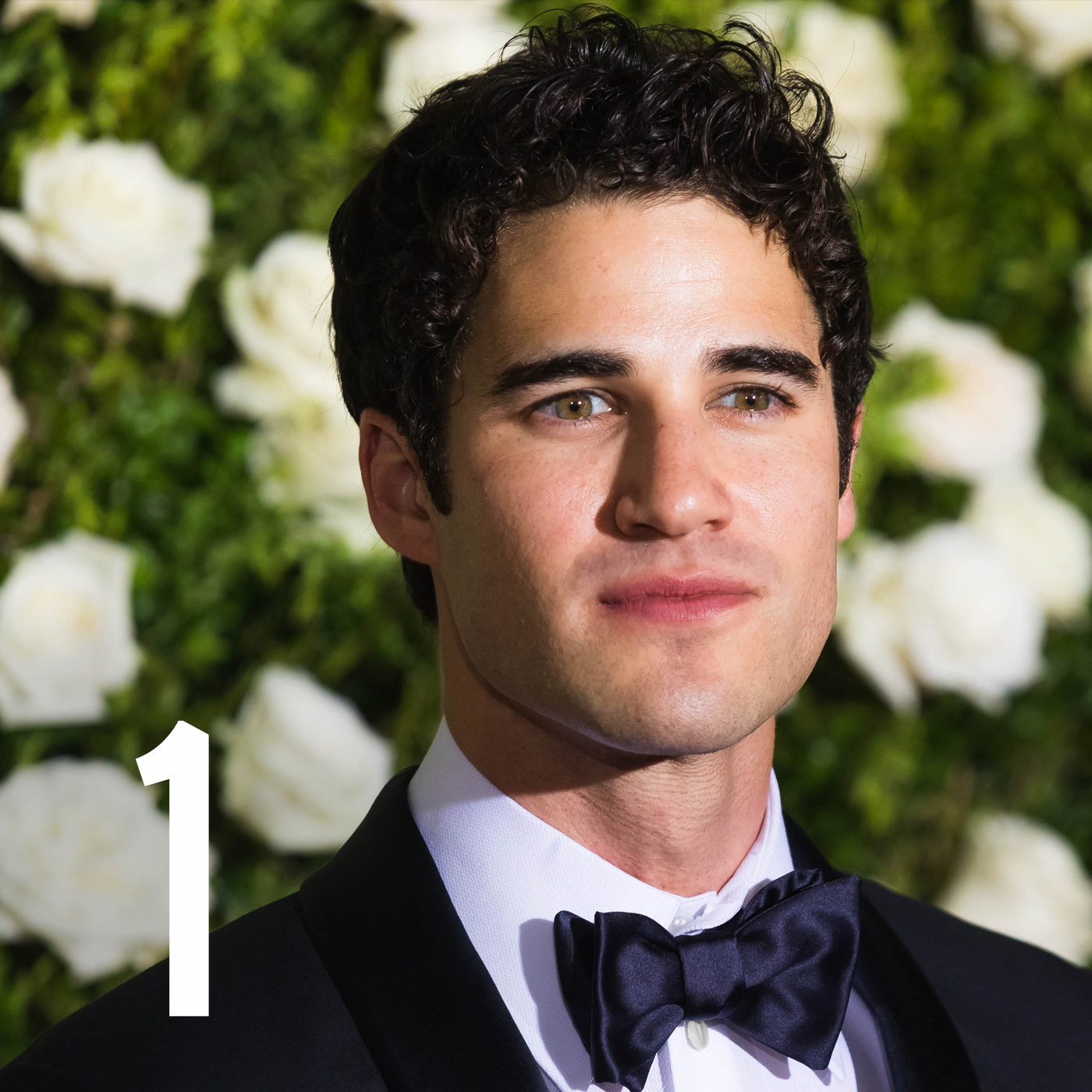 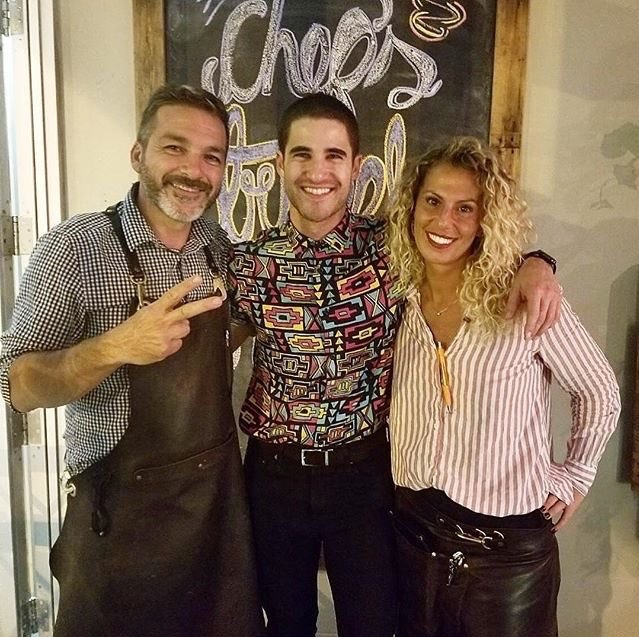 via_emilia9:  It was an honor to have @darrencriss for dinner! Thank you for your visit

Oh wow.  This is a nice surprise!

This is a possibility for me (hopefully), I think.

haha.  This is a cool way to make an announcement! She also is one of 10 Bicentennial Alumni Award recipients being honored at the ceremony, which will begin at 2 p.m. Dec. 17 in Crisler Center.

In honor of the university’s 200th birthday, the university will bestow 10 U-M alumni with Bicentennial Alumni Awards, which were designed in part to highlight the excellence and impact of recent graduates. The university also awarded 10 alumni awards during Spring Commencement in May.

“The varied and multidimensional work of the alumni we are honoring is a source of great pride for the university,” said Provost Martin Philbert. “Their contributions in fields including the arts, health sciences, public policy, entertainment and philanthropy exemplify the university’s commitment to educating individuals who will act as both servants to and critics of society.”

In addition to Ward, the remaining nine recipients are:

Criss’ career spans film, music, stage and television. At U-M, he acted, directed and composed for the Basement Arts theater group. His career took a leap when he was cast on Fox’s “Glee” in 2010. Other TV credits include “American Horror Story: Hotel” and “The Flash.” He also starred in Broadway revivals, including “Hedwig and the Angry Inch” in 2015

Aw, this is nice of Darren.  He is so supportive of others.  And Jordan does seem like a sweet person (and such a graceful dancer).

This is interesting.  It look like Darren and Elvis Duran are involved with Mia's bar (as co-owners/co-investors?). Happy thanksgiving to everyone who celebrates it.   It's been a busy year, in many ways stressful and bizarre, but I am grateful for so many things, for my family, my friends, for the people with good hearts and kind souls in the world, for all those who tirelessly fight for their rights and the rights of others.  I'm so grateful for all those who fight the good fight.
_________________

We don't celebrate Thanksgiving over here but a few shops do Black Friday.

I'm gonna shop tomorrow. Not really for sparing money but for the ambiance, even if it's not as crazy as in the US

haha.  I hope you have fun on black Friday, Jeremy.

Guest
Who's going to buy the CD + merchandise bundle? Pick it up here. 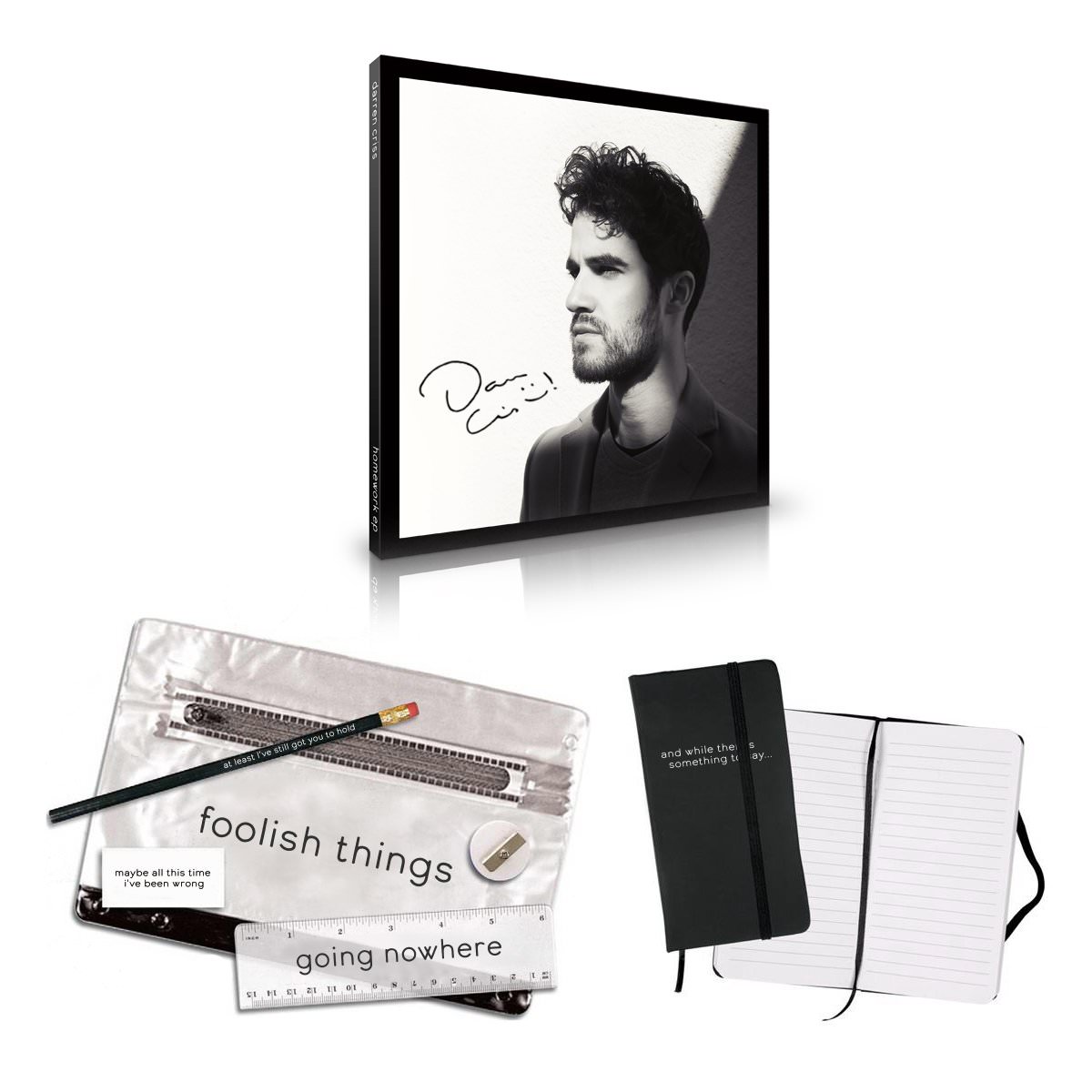 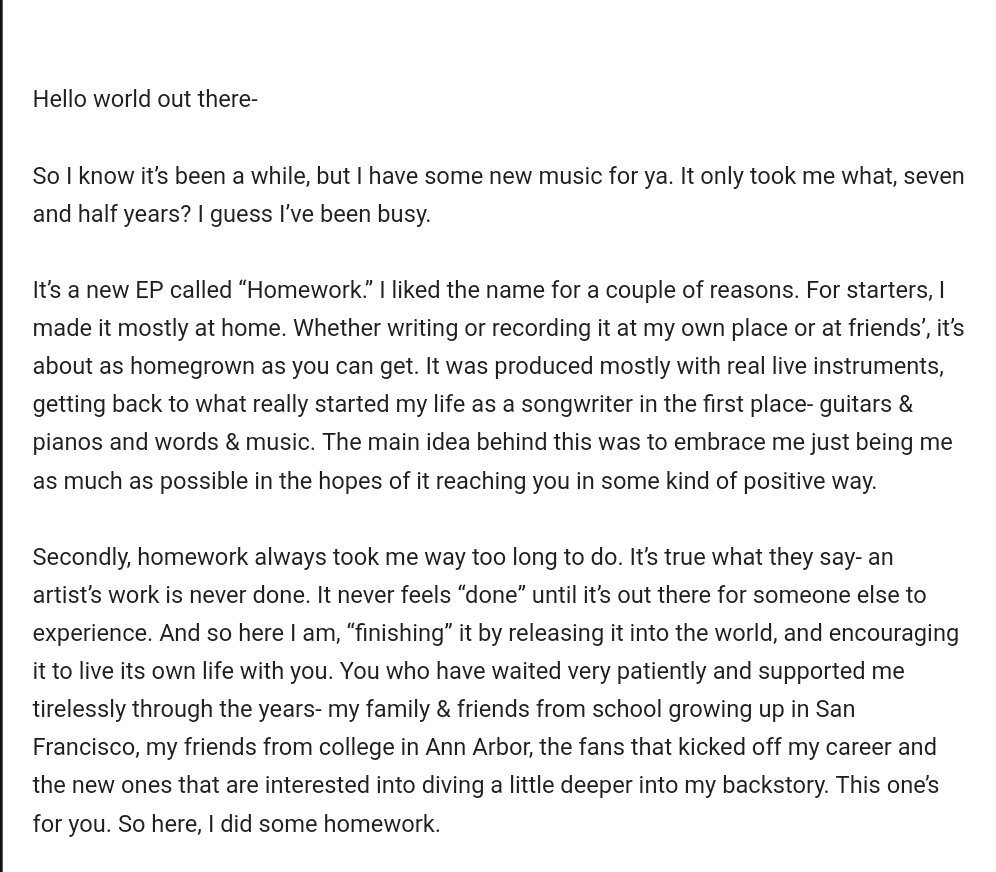 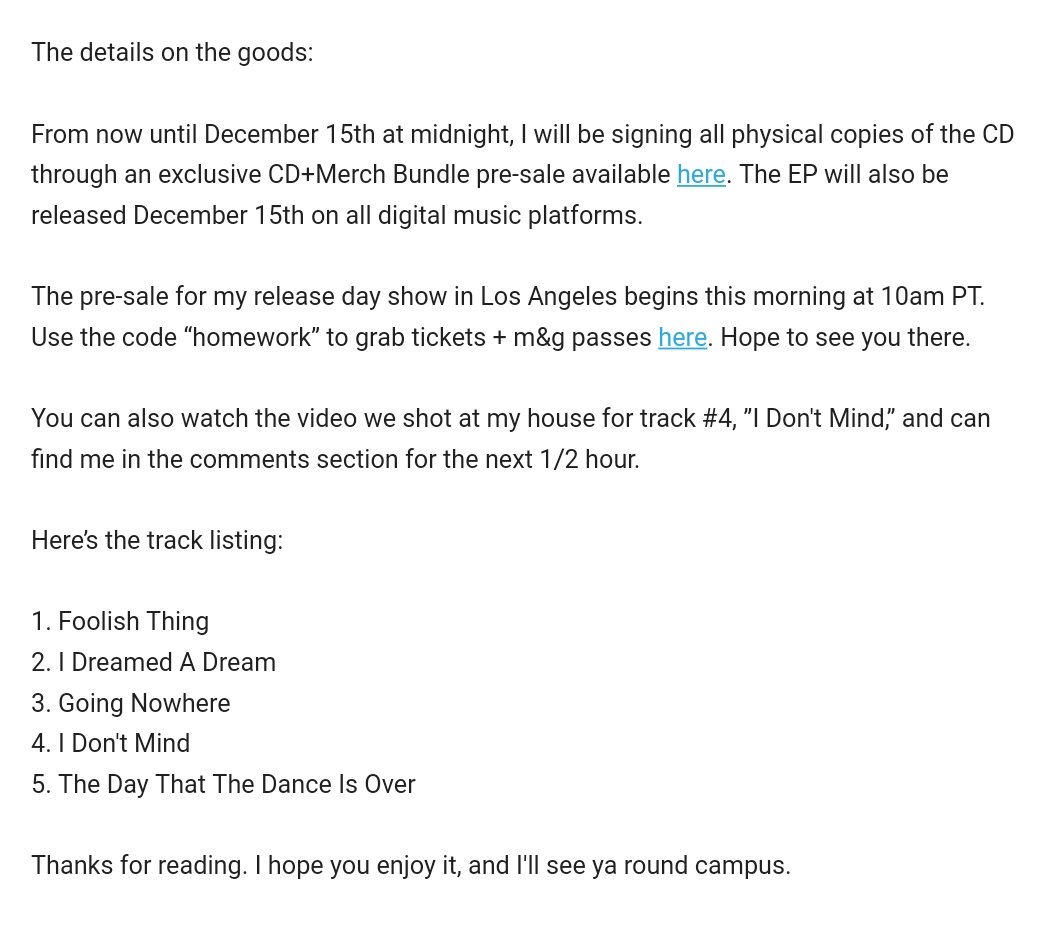 Last edited by DaisiesAndLilies on Tue Nov 28, 2017 10:34 am; edited 1 time in total (Reason for editing : left out picture of merchandise)

Jeremy and DaisiesAndLilies, thank you guys so much for posting!  haha!  Jeremy, you were right!

I loved I Don't Mind since I heard him sing it on the Listen Up tour.   Watching and listening to him sing this song is just melting my heart.  Such a pretty song and he sings it so beautifully, with so much heartfelt emotion.

This week is going to be a busy and stressful week for me.  What a nice surprise to see this lovely song performance from Darren.  It really lifted my spirits!

I still have to look at the package, but I usually buy both the CD and the iTunes album.  Thanks again both of you for posting these.


Wishing you a successful and hopefully not too stressful week, Poppy!

haha.  Jeremy, I love your announcing the YouTube video with the single word, "surprise."

DaisiesAndLilies wrote:Who's going to buy the CD + merchandise bundle? Pick it up here.

Thank you for posting that Link to buy the CD package, DaisiesAndLilies!   So I just realized that the EP is not available on iTunes until December 15.  I hope folks buy the EP on iTunes on that day, to help Darren get on the iTunes music chart.

I think I'll buy the CD package that DaisiesAndLilies was so kind as to post the link to.  I don't have anything autographed by Darren, so it definitely will be worth it.

You know, I didn't think he would record this song either.  I always liked the song a lot.  It's such a sweet song, and he performs it perfectly in such a quiet, genuinely personal way.  I really enjoyed watching him perform "I Don't Mind."   Also really enjoy watching the music artists on the various instruments in the video.  Are these the same folks he talked about before?


So glad that Darren kept his promise and released this EP!   I can't wait to hear the studio production of the other songs!

Lin wrote:I think his hair is growing on me a little, but I still think it should be growing on him instead.

haha!  you are so funny! Lin, I think the combo of the beard, the glasses, the casual hair and the plaid shirt (all in wonderful black and white) looks great on him.

Thanks guys, for the well wishes.  Hope everyone has a good week too!

Hope lots of people bought pre-sale tickets today for Darren's December 15 show at the Globe Theatre in Los Angeles!  Unfortunately, I am unable to go after all.

I hope we get a lot of videos from those generous fans. This is a much-needed public service announcement about the dangers of using your cell phone while driving.  haha.  I didn't realize immediately that the cyclist was also Darren.

@DarrenCriss
Multitasking is cool and all but not while you’re driving. Remember that no matter what… #itcanwait #ad @itcanwait http://bit.ly/ATT_TCO2

I really enjoyed that PSA video about not checking your cell while driving.  haha.  "Darren St."

Tickets for Darren's December 15 launch concert at the Globe Theatre in L.A. are on sale now. She is a makeup artist and groomer.