The Hedwig and the Angry Inch Tour in SF and L.A. (Promotion, Pre-Performances & Miscellaneous Information) 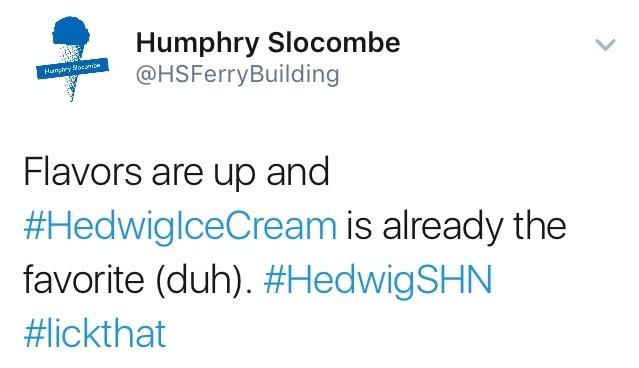 We got our "Sugar Daddy" at the Ferry Building location while we were there: 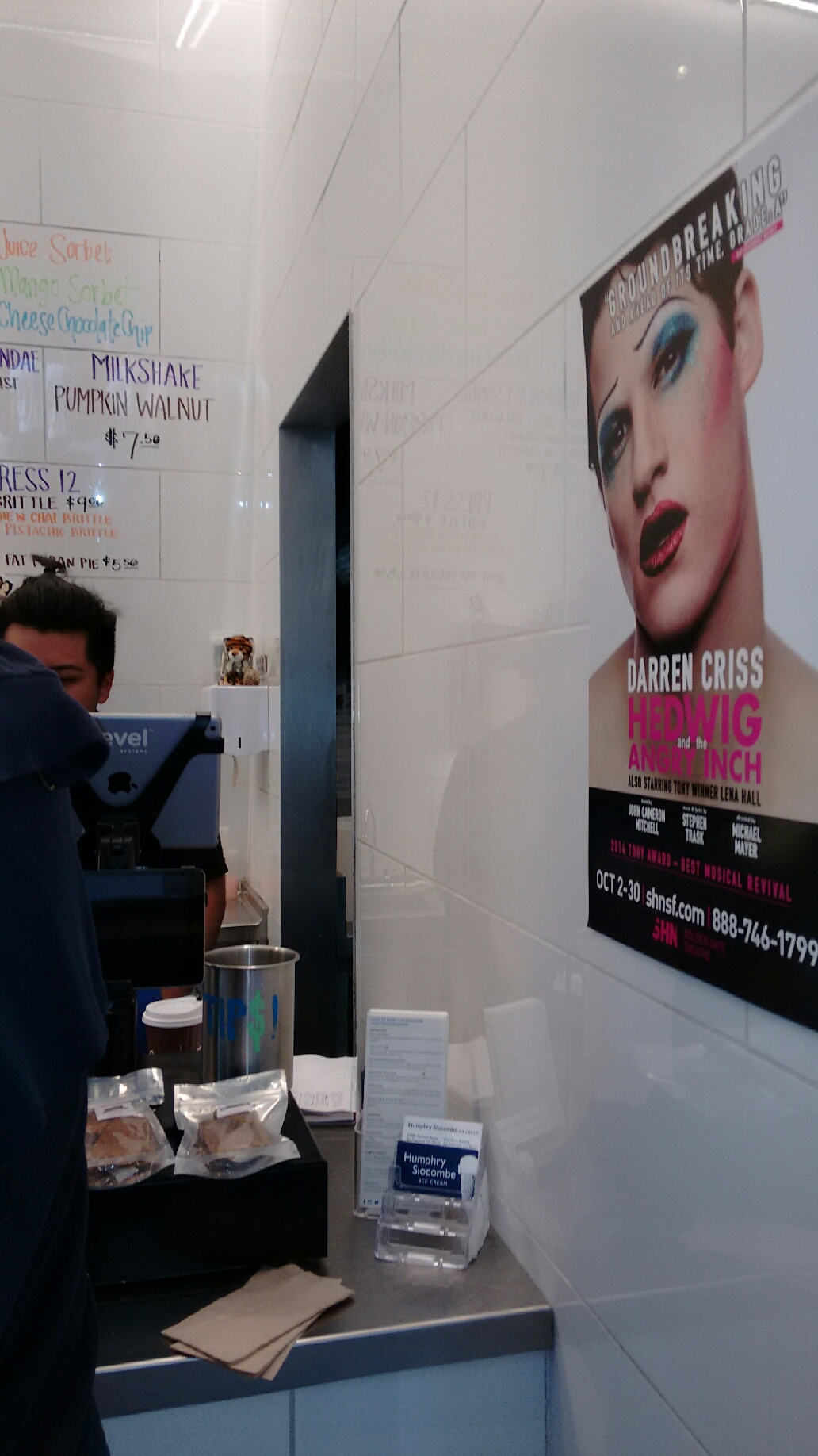 It's flavored with Dulce de Leche! 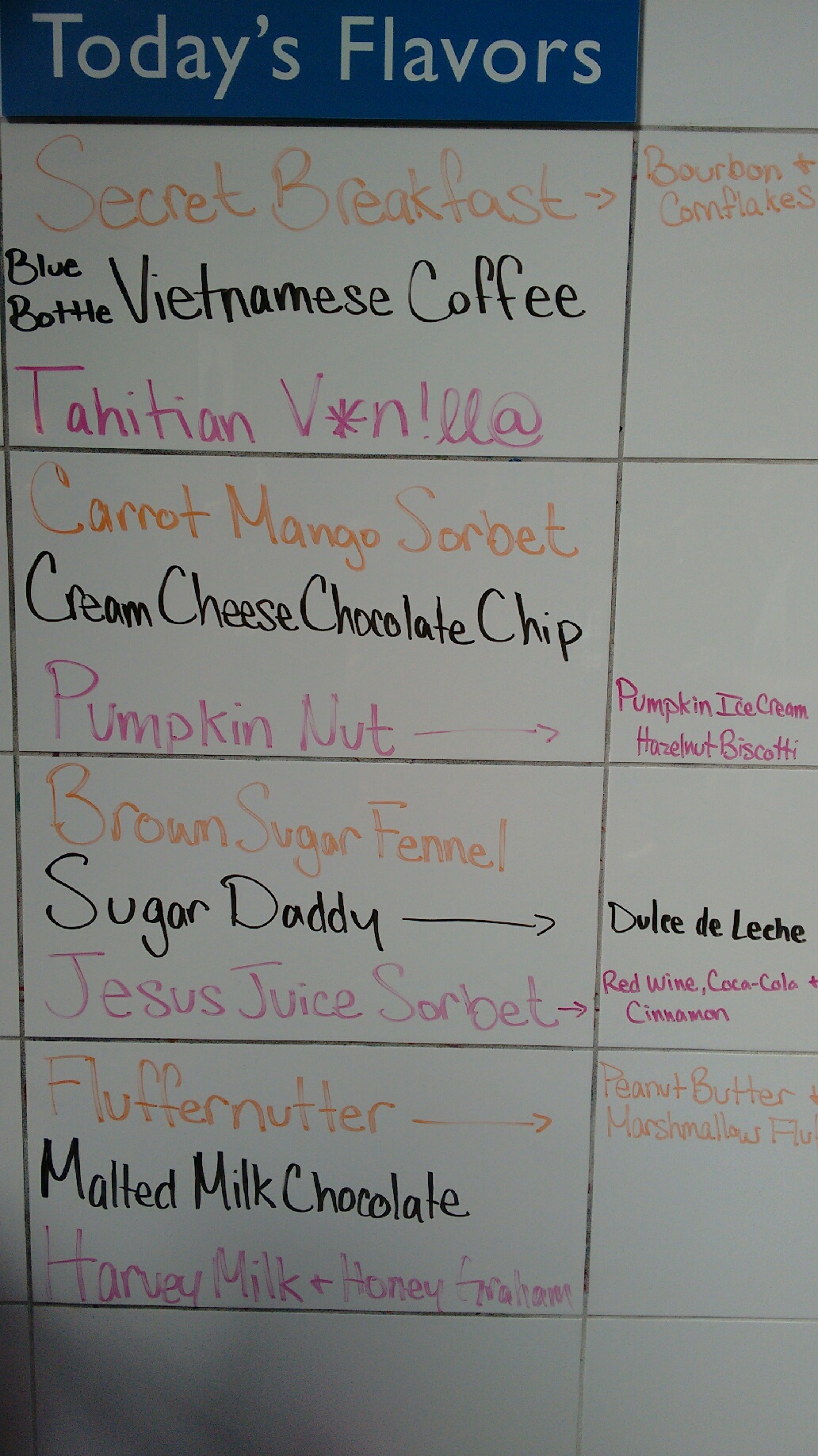 Here it is! As Lauren Zizes said about her box of Valentines' candy, "It sucked." 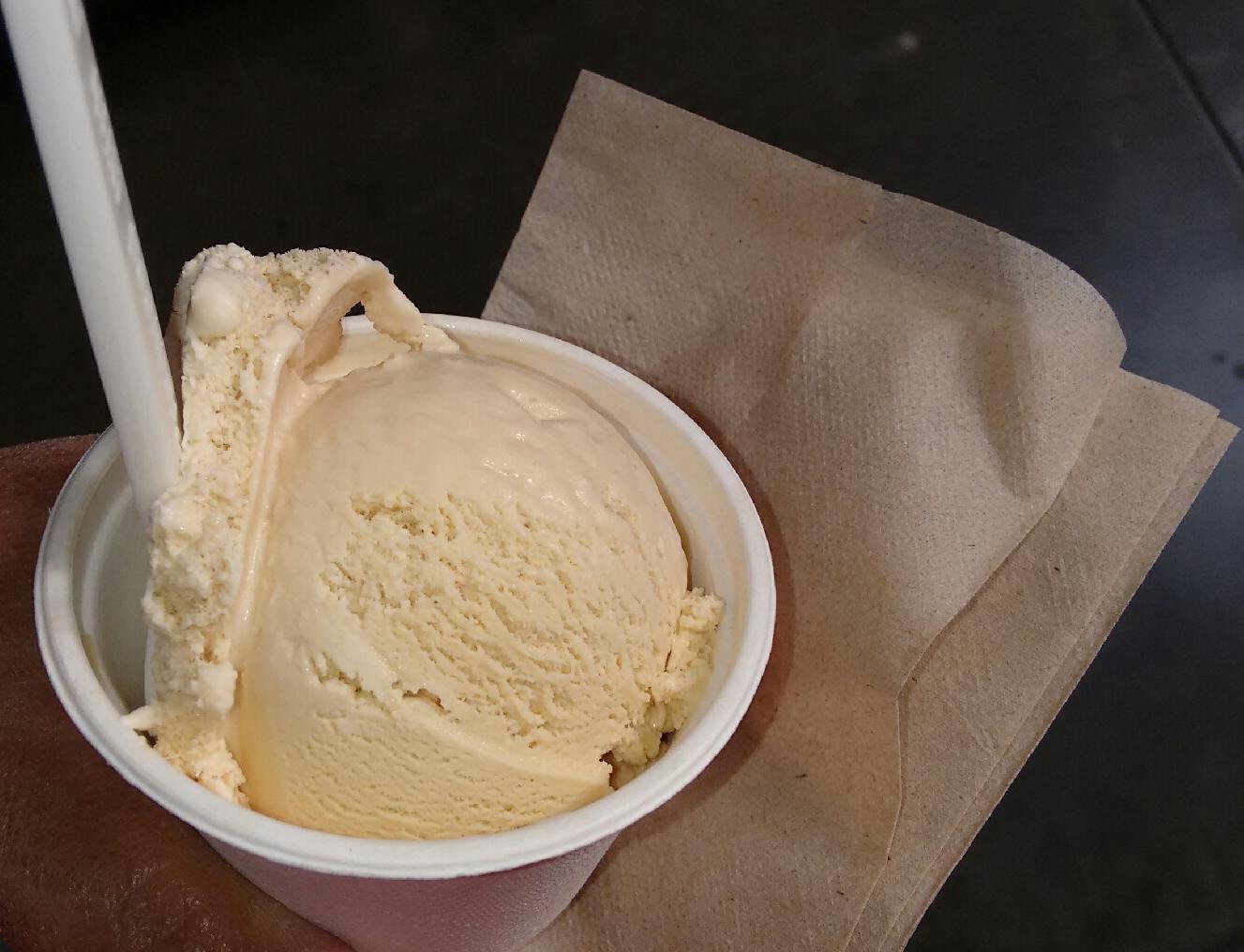 "I had to make sure it all sucked." 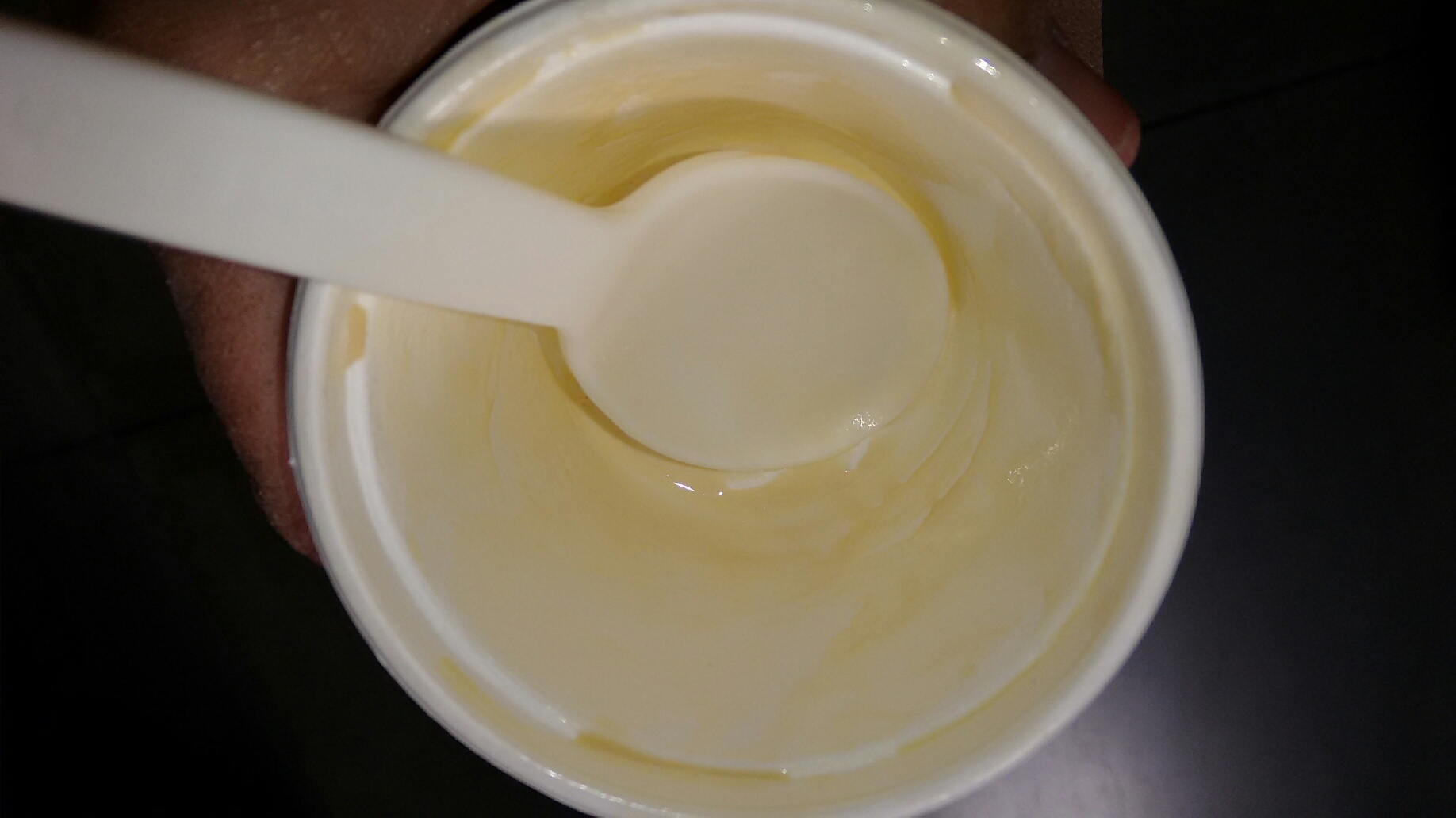 Just kidding.  It was delish! I was worried that it might be too sweet, but it was really good! There was a line and most of the people in the line were ordering the Sugar Daddy ice cream!

And it's still ok if none of your real life friends/family know about it, because they don't connect your Twitter name with your real name.  Can you change your twitter name, if you wanted?   And hey, I think your husband and mine have something in common.

Thanks for posting the TheaterMania pics, Lilikoiluv!

Aw, glad you were able to try the Sugar Daddy ice ceam!    So cool that most people were ordering that flavor!  I enjoyed your pics too.  Thanks for posting them!

This is nice, a chance to win an Orchestra seat for the Tuesday November 8 show. 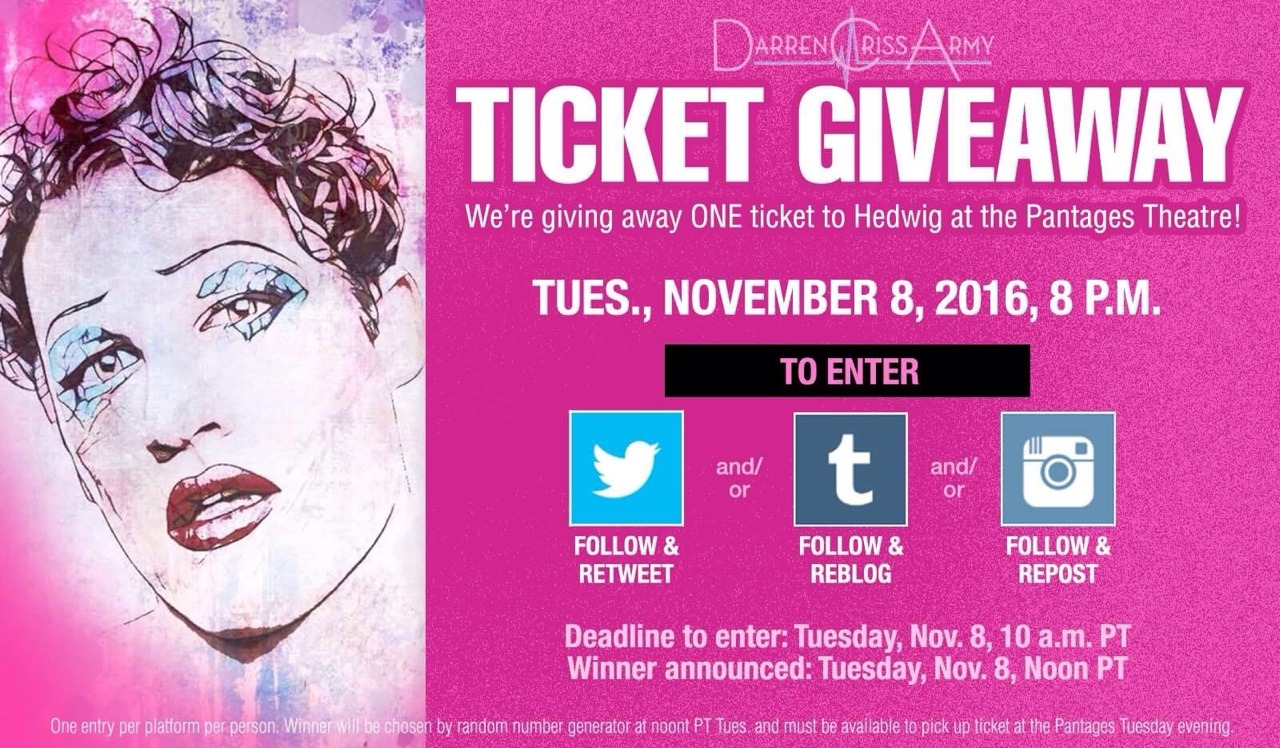 
We’re giving away an ORCHESTRA TICKET to Hedwig at the Pantages for Tuesday Nov. 8!!!

Reblog to enter! Must be following to win.

Signal boosts are appreciated…if you’re reblogging but not entering, add a comment or drop us a line! 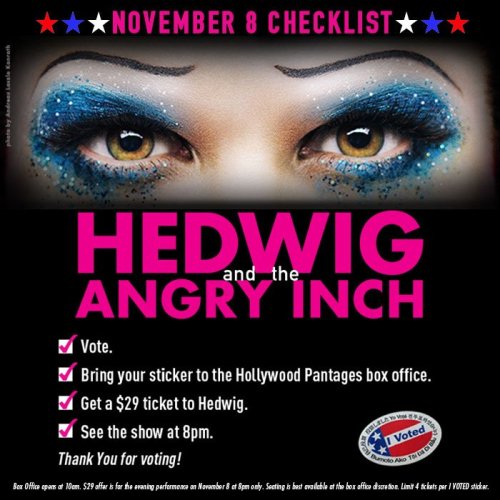 Darren did some promotion for Hedwig and the Angry Inch at ABC7LA Eyewitness News. 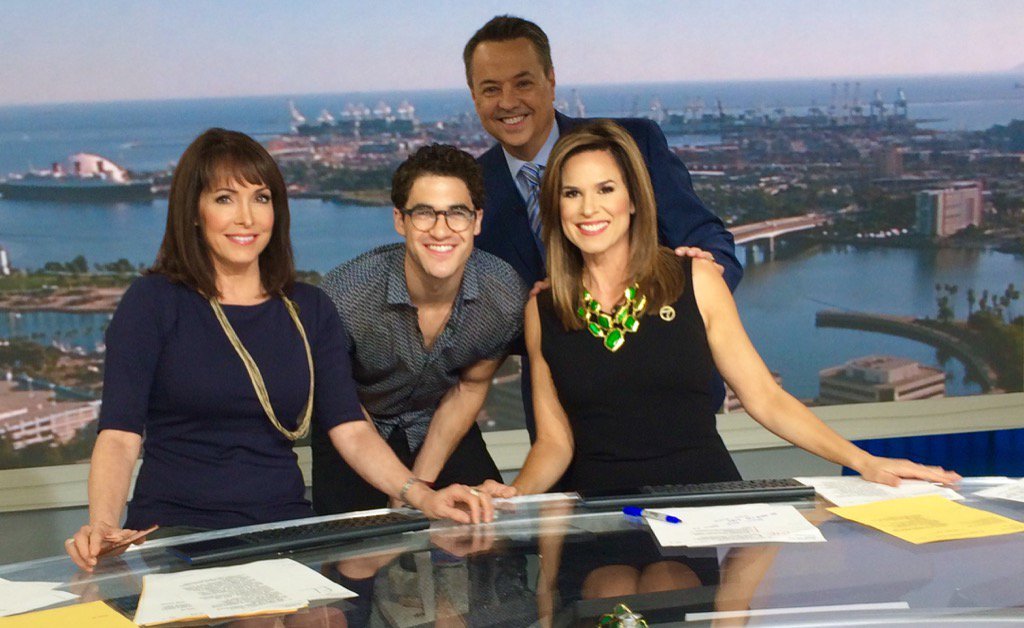 George Pennacchio HE WINS The Nice Guy Award @DarrenCriss joined us LIVE at 3 for his show #hedwigandtheangryinch. Pantages thru 11/27

Video of Darren and Lena's livestream (Facebook).  They both are very cute.

For the Wednesday November 23 matinee at 2 pm with Darren, TicketMaster is selling really good Orchestra seats (including near the stage) for $85.  Some of these seats ordinarily would go for $150.   There are also some good Orchestra seats that are farther from the stage going for $45-$65.  You can go to the Hollywood Pantages Theatre website and click on "Buy Tickets," which will connect you to Ticketmaster.  Here is the link:
http://www.ticketmaster.com/hedwig-and-the-angry-inch-touring-los-angeles-california-11-23-2016/event/0B0050C6A7AD4B6C?artistid=2212135&majorcatid=10002&minorcatid=207&tm_link=venueartist_msg-0_0B0050C6A7AD4B6C

I also received an email from Goldstar about discount tickets for Hedwig at the Hollywood Pantages during the show's last week in Los Angeles.

Here is the link and it is for 4 shows: Wednesday November 23 at 2 pm ($39), Wednesday November 23 at 8 pm ($49), Friday November 25 at 2 pm ($39), and Friday November 25 at 8 pm ($49) (NOTE:  The Friday evening show at 8 pm is with Lena Hall).    I'm not sure where exactly the seats are located, but there are Orchestra seats for the 2 pm shows.  You have to sign up with Goldstar to purchase the tickets.  I checked on BroadwayWorld message board, and the majority of folks feel that Goldstar is legitimate.  I also called up the Pantages Theatre Box Office and was told that they honor/accept Goldstar tickets

Here is the link: Goldstar-Hedwig and the Angry Inch (Hollywood Pantages)

I'm not up to date on the latest on vaccinations for MMR.  If Darren got his series of vaccinations as a child, is that sufficient, or is there a booster for older teens/adults??   In addition, French-kissing multiple folks during the week, during Flu  and cold season, is a risky thing.  If Darren catches the flu, he could be out for several days, depending on how bad are his symptoms.  I say he should just go back to face-licking, or a kiss on the cheek.

More discounts for the final week of the Hedwig tour in Los Angeles.  Sales seem to be affected by Thanksgiving.

This is actually a good deal.  There are some tickets in the Orchestra, as well as the Mezzanine, going for $39 or $49. 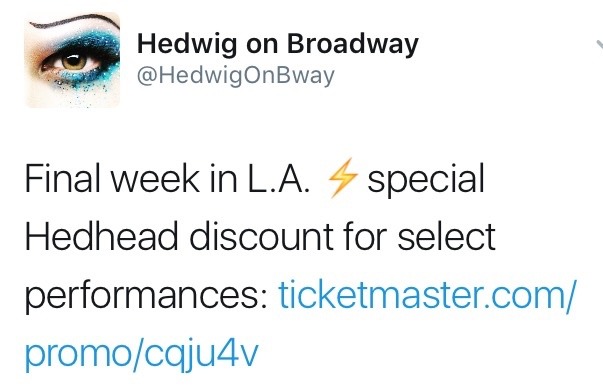 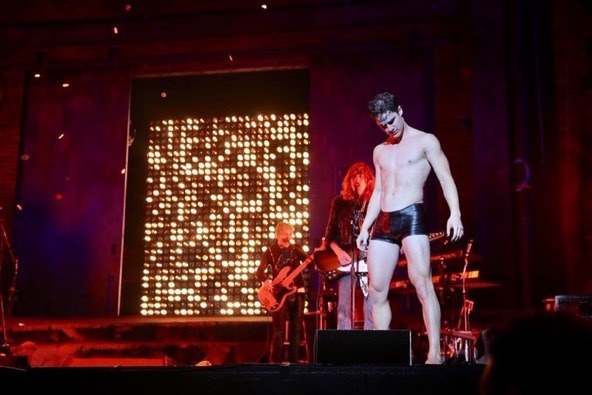 ALL SALES FINAL. No exchanges or refunds. Standard Ticketmaster service fees apply to online or phone orders. Offer may be revoked without notice. Limit 8 tickets per person per 7 day period. All prices do not include a $3 facility fee. Offer ends November 24, 2016 at 11:59pm.

More discounted tickets for the last week of the Los Angeles shows!

Link to the Wednesday deal: link
via dailydarrennews

Also, there is a Black Friday Deal:

Note:  Not sure which 3 shows (or if any 3 shows), so not sure if includes Hedwig and the Angry Inch.

So to summarize all these discount offers:

For the Wednesday, November 23 show at 2 pm, for $85 tickets that are closer to the stage, just go to the Pantages website, select "Buy Tickets," and select Wednesday November 23 at 2 pm:  http://hollywoodpantages.com/

For the Wednesday, November 23 show at 2 pm, for $39 tickets, use this link:   http://www.ticketmaster.com/promo/cqju4v

For Friday, November 25, 2 pm matinee (with Darren), for $39 tickets, use this link:  http://www.ticketmaster.com/promo/cqju4v


And if you are willing to wait to buy tickets for the Pantages's Black Friday deal (3 shows for $99; no fees, deal starts Friday at 12:01 am), stay tuned to the Hollywood Pantages's twitter:   https://twitter.com/Pantages 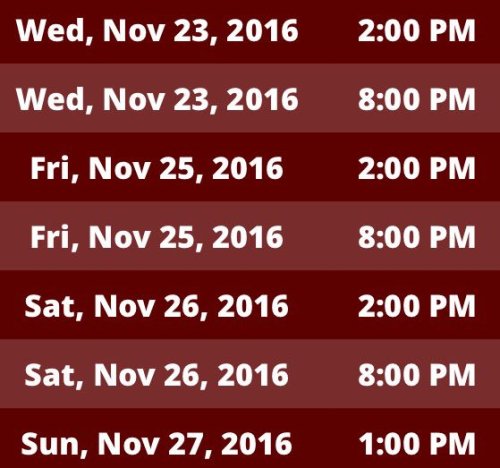 From DarrenCrissArmy:
Short little interview with Darren, with short clips of Darren in the show.

Hope to get a better quality vid for you soon, but for now, check out Darren’s interview with KTLA’s Doug Kolk about Hedwig from tonight’s 10 o’ clock news, 11/22/16.
DarrenCrissArmy

Guest
This is late, but just wanted to leave these nice gif sets from Darren and Lena's facebook Q & A for posterity.

They are so adorable:

If anyone dead or alive could see you in Hedwig, who would it be?

Lena: You have this really cool voice, don’t be afraid of it.
Darren: Thanks! Everybody else, be very afraid.

And one of Darren's compliments for Lena too:

“The show is called Hedwig and the Angry Inch. Lena Hall won a Tony for her role as Yitzhak in it in New York. Now we’re in Los Angeles where I just try to keep up with her.” x

Thanks so much for posting those gif sets, Lilikoiluv.  That first one was hilarious!  The second one, where Lena talks about how Darren's Tommy is her favorite Tommy, and how she likes the way Darren's Tommy performs Wicked Little Town Reprise, is so wonderful.  Love how that gif set captures that!   And I love how supportive Darren is as well of Lena and her talent, as captured in the 3rd gif set. 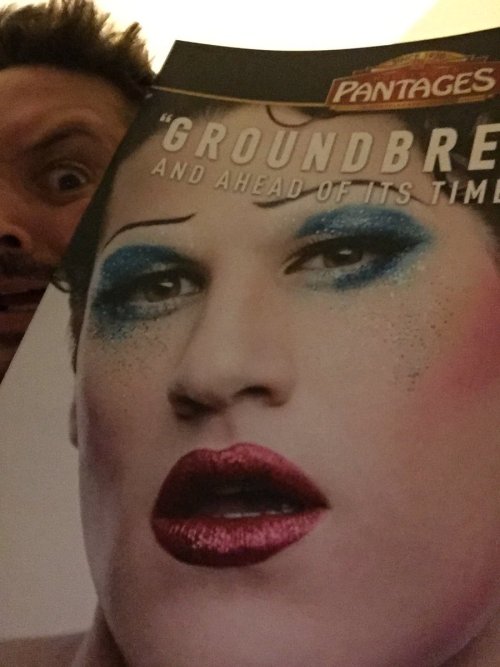 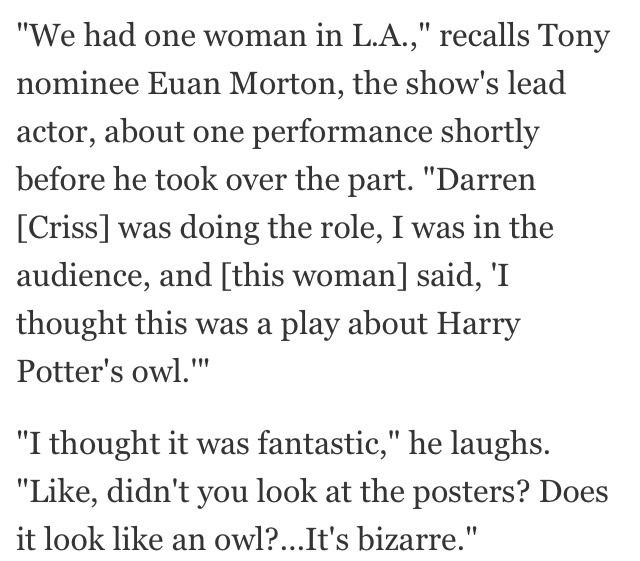 Hedwig’s Euan Morton on Kissing Nonagenarians and Fooling Potter Fans Across the U.S.

Wow, this is very nice news.  Darren is nominated by the Los Angeles Drama Critics Circle (LADCC) for Lead Performance (in Hedwig and the Angry Inch tour):

The Los Angeles Drama Critics Circle (LADCC) has announced its nominations and special awards for excellence in Los Angeles, Orange County and Ventura County theatre for the year 2016 (Dec. 1, 2015 - Nov. 30, 2016).

All event tickets are $40 and can be purchased at 2017criticsawards.brownpapertickets.com (a small service fee applies) or at the door if available. (Purchased tickets will be held at Will Call.) Doors will open at 6:30 p.m. for a reception with hors d'oeuvres and a cash bar. The show will commence at 7:30 p.m. Further information will be found at www.ladramacriticscircle.com.

The nominees for the Los Angeles Drama Critics Circle Awards for theatrical excellence. . .  are as follows:

· Hugo Armstrong in All the Way, South Coast Repertory.

· Andrew Bongiorno in The Boy from Oz, Celebration Theatre.

· Ginna Carter in The Eccentricities of a Nightingale, Pacific Resident Theatre.

· Rebecca Gray in One of the Nice Ones, The Echo Theater Company.

· Matt Orduña in Bars and Measures, The Theatre @ Boston Court.

The awards event will occur on Monday, March 20 (the same day as the Supergirl musical crossover).

Aw, this nomination for Darren's outstanding work in Hedwig and the Angry Inch tour is well deserved!

Congrats again to Darren for his Los Angeles Drama Critics Circle nomination for Lead Performance (in the Hedwig and the Angry Inch tour at the Hollywood Pantages Theatre), and also congrats to Lena Hall for her nomination for Featured Performance. 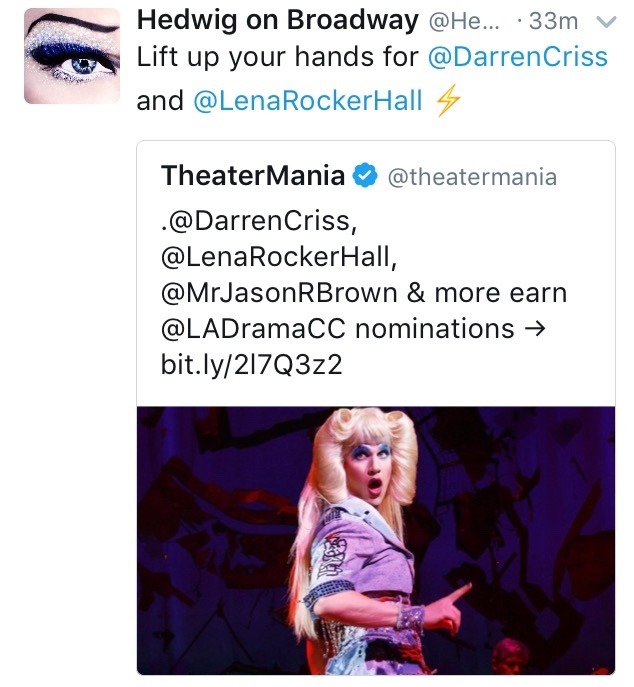 
And Darren showing his support to Mason Alexander Park.

So glad to hear that Mason is able to play the lead role in the tour. 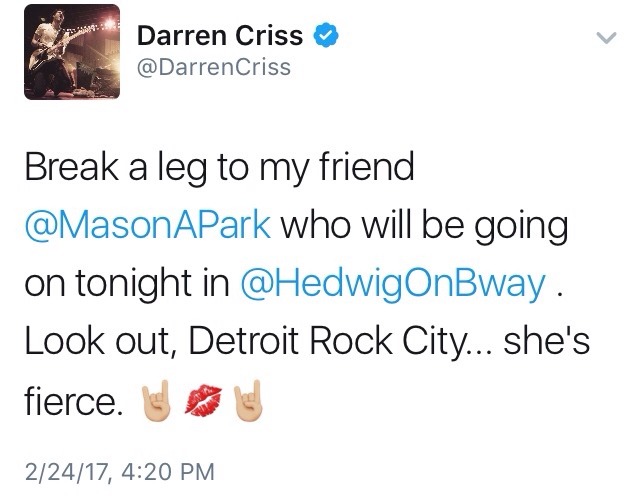 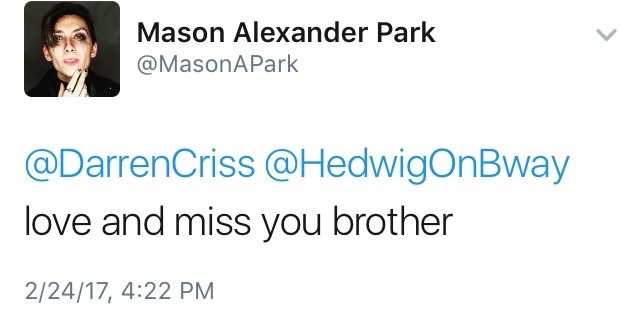 BroadwayWorld wrote:
BWW Exclusive: The Life and Times of HEDWIG AND THE ANGRY INCH

[Neil Patrick] Harris, who stayed in the production until August 17, 2014, won the 2014 Tony Award for Best Leading Actor in a Musical, and was followed by Andrew Rannells, who had played the role years before in a regional production. Hedwig was then played by Michael C. Hall, original creator John Cameron Mitchell, Darren Criss, and Taye Diggs. The role of Hedwig did not have an understudy.

Following the closing night was a previously-scheduled gig by the Tits of Clay. Much of the audience for the final performance went to their show afterwards, which featured surprise performances by Lena Hall, Rebecca Naomi Jones, Darren Criss, Shannon Conley, and Michael C. Hall.


The national tour of the 2014 Broadway production launched at San Francisco's Golden Gate Theatre on October 4, 2016. It initially starred Broadway Hedwig Darren Criss and Tony-winning Yitzhak, Lena Hall. Both are Bay-area natives, so the extended tour-stop was a bit of a homecoming.

Darren Criss as Hedwig, Lena Hall as Yitzhak, and
the Tits of Clay band in LA. Photo by Chelsea Lauren.

I was lucky enough to see both Criss and Hall in the role, having missed Criss on Broadway - several friends and I travelled to San Francisco for five days, seeing the show three times. We ran into several other fans who were doing the same thing, proving that even though the show had closed, many of the fans were still in love with it and willing to travel to see it even one more time.

The production was nominated for two Los Angeles Drama Critics Circle Awards for the performances of Criss and Hall. 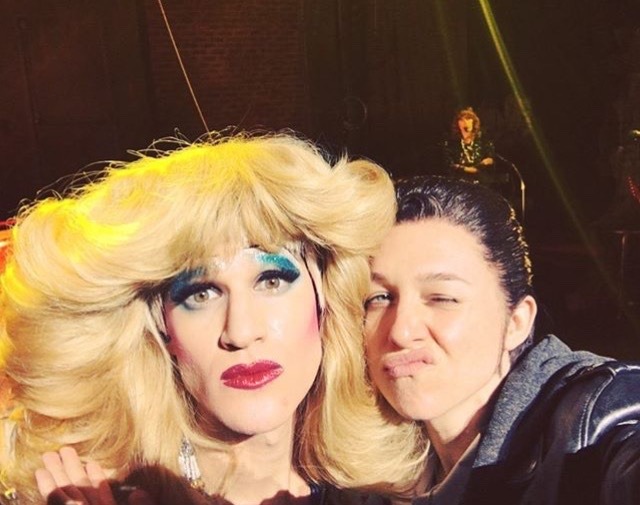 Re: The Hedwig and the Angry Inch Tour in SF and L.A. (Promotion, Pre-Performances & Miscellaneous Information)