Please feel free to post your comments regarding Royalties in this thread.

If you would like me to start a new thread (Topic) that is within the Category of "Darren's TV Projects," please let me know.

Lilikoiluv posted this in another thread.  Thanks for posting this news about Royalties here, Lilikoiluv!   We appreciate your keeping your eyes open for news about Darren's TV project and bringing that news over here!

Lilikoiluv wrote:I don't see a 2017 thread so I hope this is okay.
Gah! I dunno how to get the image to show  from my kindle, so here's the link:
fallenjunkie.tumblr.com/post/155640472436/pscarlyle

Sorry that I didn't do this earlier, Lilikoiluv.   I just opened a new thread for Royalties.     You can copy your post here. 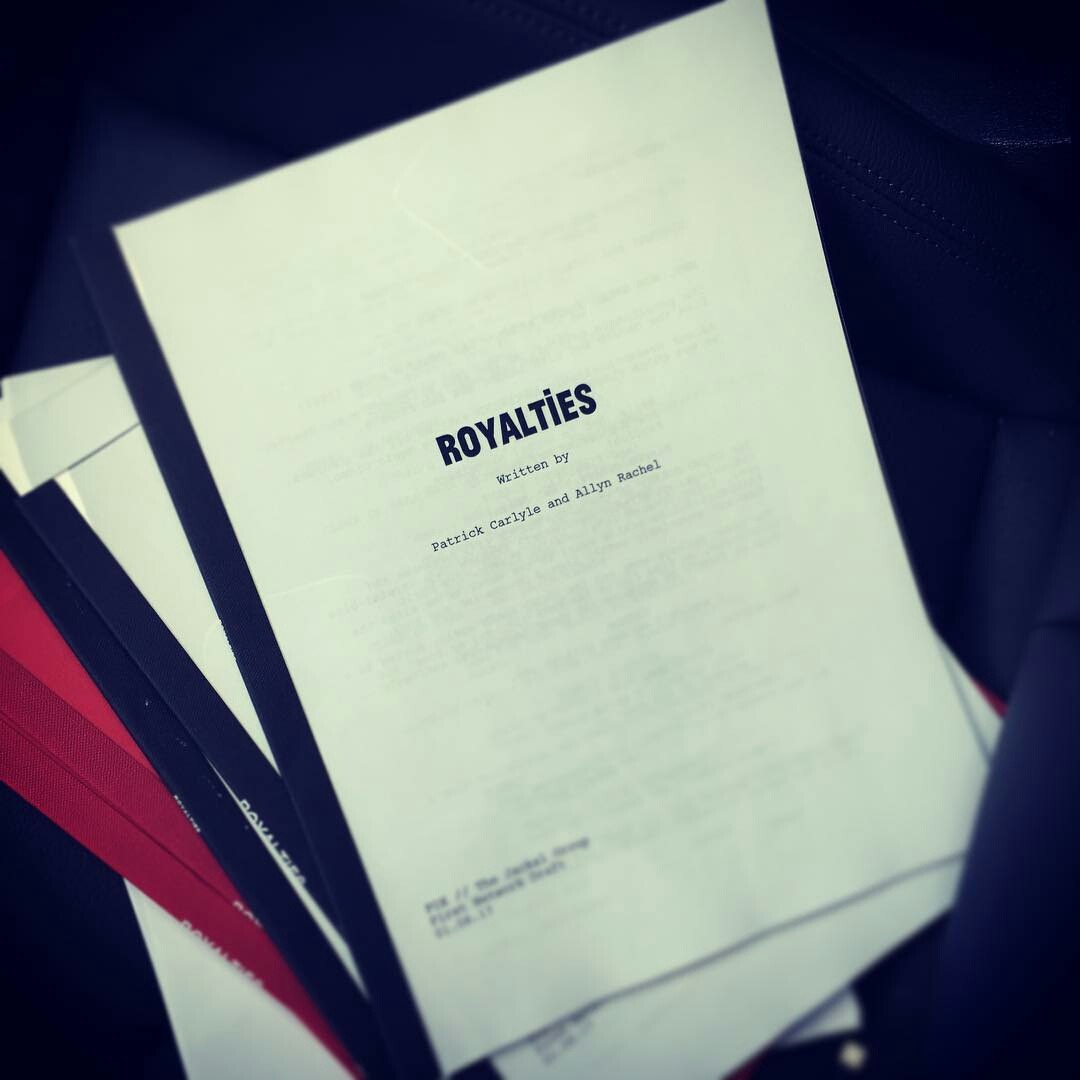 
This is Patrick Carlyle's instagram.  He is one of the writers connected to Royalties!    This is definitely a good sign!

P.S. Sorry the captions under the pic above is confusing.  All that followed after Patrick Carlyle's name in his instagram message were various emoticons and I had to delete them.  Warning to everyone:  If you don't delete emoticons in twitter or instagram messages, then everything in your text box/your post (your comments, other pics and videos ) that follows after the emoticons in the tweet/instagram will disappear (an issue with Forumotion code).

Lin, it looks like all your detective skills added up and are coming true!   Great job!

@Poppy wrote:Sorry that I didn't do this earlier, Lilikoiluv.   I just opened a new thread for Royalties.     You can copy your post here.

No problem, Poppy.  Thank you! I'm so happy that we are now at the point of "Royalties" having its own thread!

Thanks for the reminder, Poppy. I would have totally forgotten that. And thank you for posting Patrick Carlyle's instagram pic and caption!

@Poppy wrote:Lin, it looks like all your detective skills added up and are coming true!   Great job!

Yes! Thanks for sharing the fruits of your detective skills with us, Lin!  It's been so interesting and exciting following the trail you started!

It seems that a pilot, at least, has been ordered, right? I need tumblr CSI to refocus the blurred out corner for us.  It looks like there is a 2017 date on the last line. Perhaps a production date? I also wonder what the difference is between the black binding and red binding for the scripts--could it be cast vs. director/crew?

OT: As you can probably tell by my overuse of emoticons, I'm back on my regular computer.  lol.

Lilikoiluv wrote:It seems that a pilot, at least, has been ordered, right? I need tumblr CSI to refocus the blurred out corner for us.  It looks like there is a 2017 date on the last line. Perhaps a production date? I also wonder what the difference is between the black binding and red binding for the scripts--could it be cast vs. director/crew?

Oh, you're right of course!   I didn't even look at the small print at the bottom left corner of the pic.  Good thinking, Lilikoiluv!   You are also using your detective skills.   If you come across the tumblr CSI, can you please post it here?   Maybe they can bring the small print into a clearer image.

Yes, I would think that this means that a pilot was ordered to be filmed/produced.

I see on the top line of the fuzzy print at the bottom left corner:    The first word (top line) appears to be "FOX."  Then:   "The Jackal Group," which if I remember correctly, was the production group named in the media articles about Royalties.

And you're right of course, Lilikoiluv!   The third line appears to be a date.  It's awfully fuzzy.  I think I see the "17" at the end.  Not sure about the first 4 numbers, guessing "02-14"?   Maybe the date for the cast to do a reading?  I have read several articles where they say the filming of pilots usually happen February - April, usually March - April, so maybe it is a film date, as you said.

And your logic seems good, in terms of the black binding versus the red binding.

Remember this, you guys?  Lin and Lilikoiluv posted this (November 23 and November 18, respectively) about the Jackal Group folks, along with Jonathan Gabay (Vice President of comedy development and programming at FOX) and both writers (Patrick Carlyle and Allyn Rachel) seeing Darren in Hedwig. 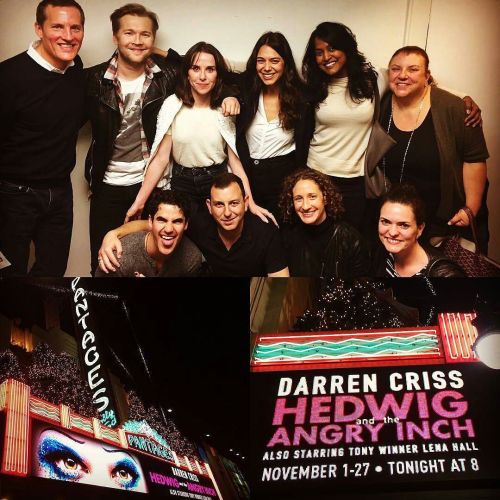 Late reply, but I think the two writers who are attached to the project, Patrick Carlyle and Allyn Rachel, are in the picture as well.

//Edit after some quick stalking:
Three of the other people are Gail Berman, Joe Earley and Dani Gorin of The Jackal Group, the production company that is developing Royalties. Not sure who the remaining three are, but how nice that they all went to see Darren together!

Guest
Hm, I'm not sure this confirms that a pilot is going to be filmed. I'm pretty sure the blurry part says "First Network Draft", so I think that means FOX still needs to approve? I can't make out the number that follows, but I assume it's the date the draft was finished.

But for what it's worth, Ricky replied with a praise emoji.

You could make out more than I can of the second line.  I thought the first word was "Pilot."  But it does look more like "First."  So if it says "First Network Draft,' then it does suggest it's not ready for filming/production yet.   And thanks for pointing out that Ricky posted a comment on the instagram by Patrick Carlyle.

I don't know.  In short, I'm not familiar with the process, except what I read in articles, and that's in broad terms.  So I'm just not sure what the pic means, in terms of the status of the project.


I'm still very happy to see the instagram pic by one of the writers of the script.

Hopefully, we hear more this month.  Cross fingers we get some confirmation of the pilot being ordered/filmed.

Darren mentioned Royalties during an interview focusing primarily on Computer Games.  It sounds like it still may be a possibility (maybe not for this Fall, but maybe for the following season)?   I had wondered if because Darren had a 4-5 month commitment to film Versace, then that meant Royalties could not be developed for this season since Darren would be unavailable.

Darren: Before Glee, my main squeeze was my group Starkid. Basically, out of college, my big break was an internet comedy group that changed my life. Starkid was my musical, creative outlet. That's when I realized I could be a songwriter for a living, which is why I eventually ended up writing songs for Glee. The last songs I wrote was right when I joined Glee. That was the last Billboard record I had. Anyway, that was my outlet for writing songs. Right after Glee, I have a singer-songwriter EP in the can, which I'm waiting to put out later this year. I was originally going to put out the singer-songwriter EP at the same time I put out the Computer Games EP. After being absent for a while, I didn't want to confuse fans or people who weren't familiar with myself, to focus on one thing at a time. I have a TV pilot I've been in development with for a while. There's a lot percolating. That's also why it was important to get Computer Games out, because it's only three songs. We thought it was cool to put out the songs, tour and let it incubate before we put out a full-length. We're using the "figuring it out as we go" model.

Does this mean Royalties is happening?  Or is the pilot being filmed, but no decision yet from a network to order a season? 
EDIT:  I wanted to add, even if Fox doesn't order a season--congrats to Darren!  Bravo for getting the pilot filmed (that's what it looks like to me)!!

He definitely has even more going for him now that he is is Emmy Award-wining actor Darren Criss (as well as Emmy-nominated songwriter)!!    What a go-getter!    Way to show initiative, Darren! In this pic, Darren was taken at the iHeart Radio Music Festival in Las Vegas (on September 21, 2018).   This is via Jonathan Gabay's instagram story--remember, Jonathan Gabay is one of the FOX executives that had tweeted about "Royalties" a while ago (before we found out that Darren was cast in ACS Versace). More pics and a video.

Is this the first time we find out that Nick Lang is involved with "Royalties"?  Is he gonna be in the pilot too, or involved with the script? Darren, Nick Lang & Kether Donohue working on what we assume is the revived Royalties.

Darren & Kether Donahue working on what we assume is the revived Royalties.

Via Kether on IG