I thought I would add this quote from Sharon Klein (executive vp casting at the Fox TV Group) that appeared in The Hollywood Reporter.

What's the most sought-after role for an actor today?

They all call and want to be on a Ryan Murphy show.


And now Darren will be one of the fortunate actors to be working with Ryan Murphy on one of his most acclaimed TV shows (not to mention that it seems that Darren either will be a co-lead or lead in said show)!

“Darren Criss is one of the most exciting young performers in the world of film, TV and stage today,” Ryan Murphy told me about why he cast the Fil-Am actor as Andrew Cunanan in his coming “Versace: American Crime Story.”

Ryan, who previously worked with Darren on “Glee” and “American Horror Story,” explained, “We have been talking for several years about doing something dark and adult together. And this role seemed like an exciting and unexpected fit.”

Darren, for his part, tweeted about collaborating with the Golden Globe- and Emmy-winning director, writer and producer: “Needless to say, very excited and grateful to be working with my friend @MrRPMurphy again.”

As a fan of Darren, this is the kind of stuff that I adore reading, how others in the industry hold Darren in high esteem.

one of the most exciting young performers in the world of film, TV and stage today

Whoa.  Darren  had a busy day today (WE Day--NY, and FX Upfronts).  Luckily the FX Upfronts were in NYC.

Edgar Ramirez and Darren Criss buddy up on the red carpet for the FX Network 2017 All-Star Upfront on Thursday (April 6) at the SVA Theater in New York City.

The handsome actors were joined at the event by American Crime Story co-stars Sarah Paulson and Cuba Gooding Jr along with Fargo star Ewan McGregor.

Edgar and Darren are both set to star in the upcoming third season of American Crime Story focusing on the murder of designer Gianni Versace. 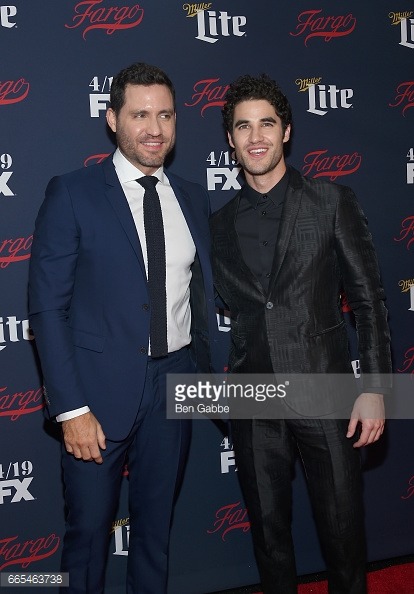 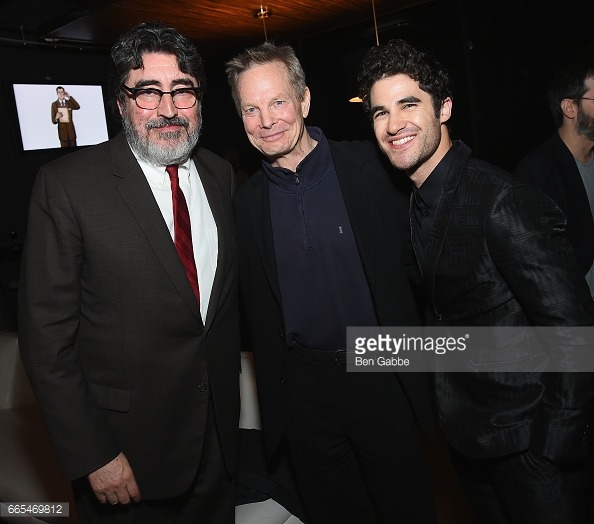 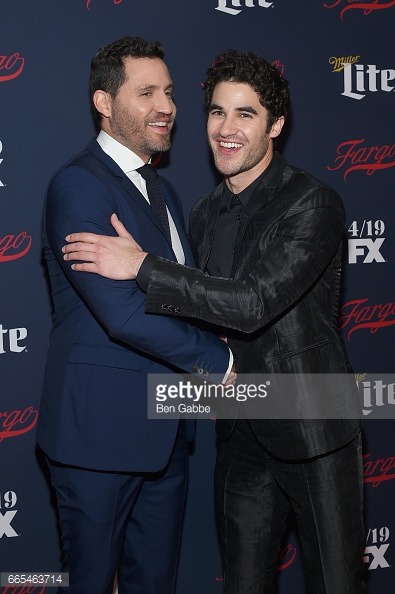 For more pics, go to the source indicated. 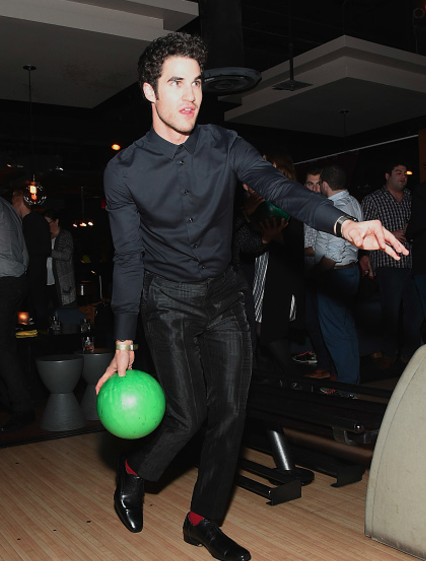 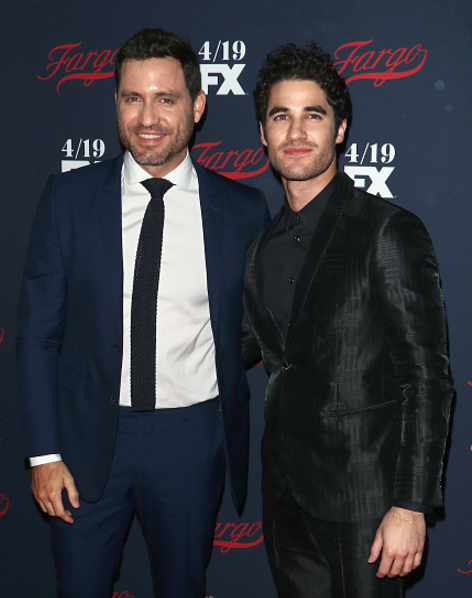 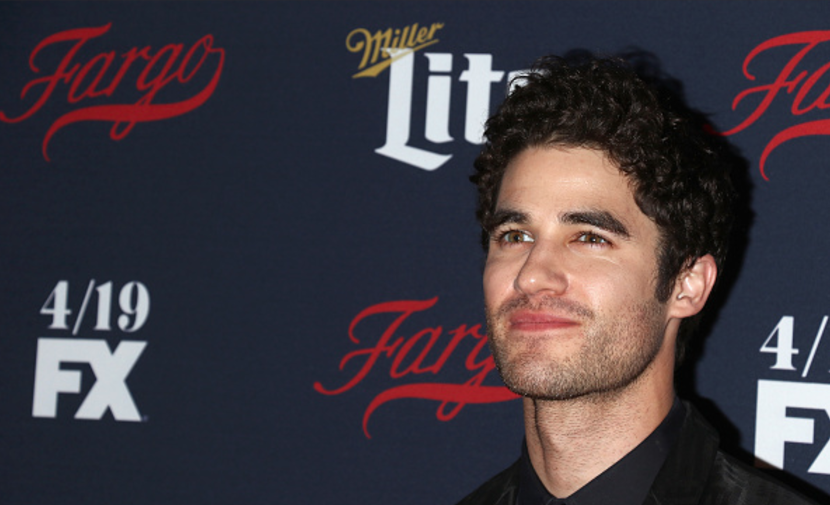 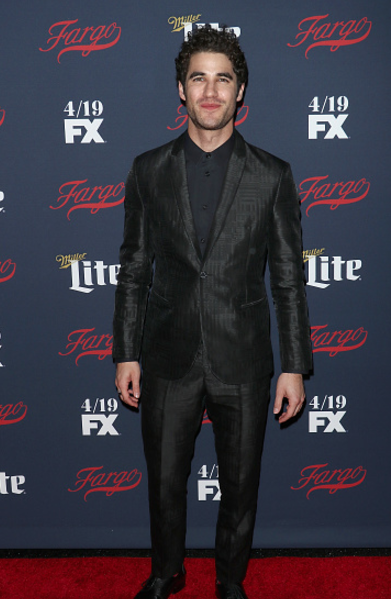 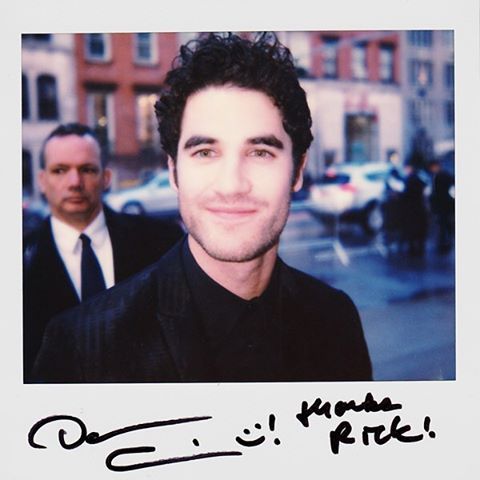 
Thanks Alex (of DCN)--gorgeous pics! 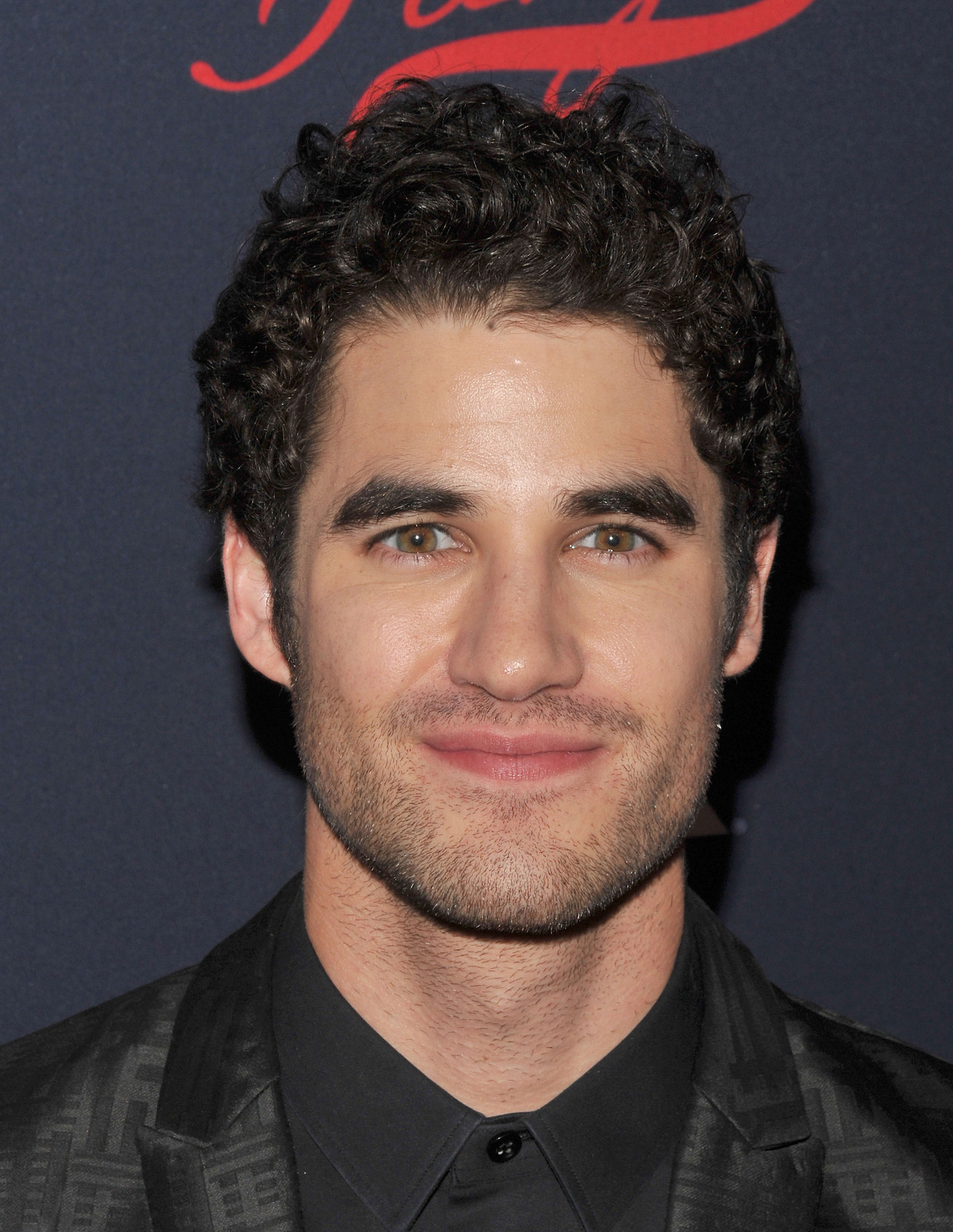 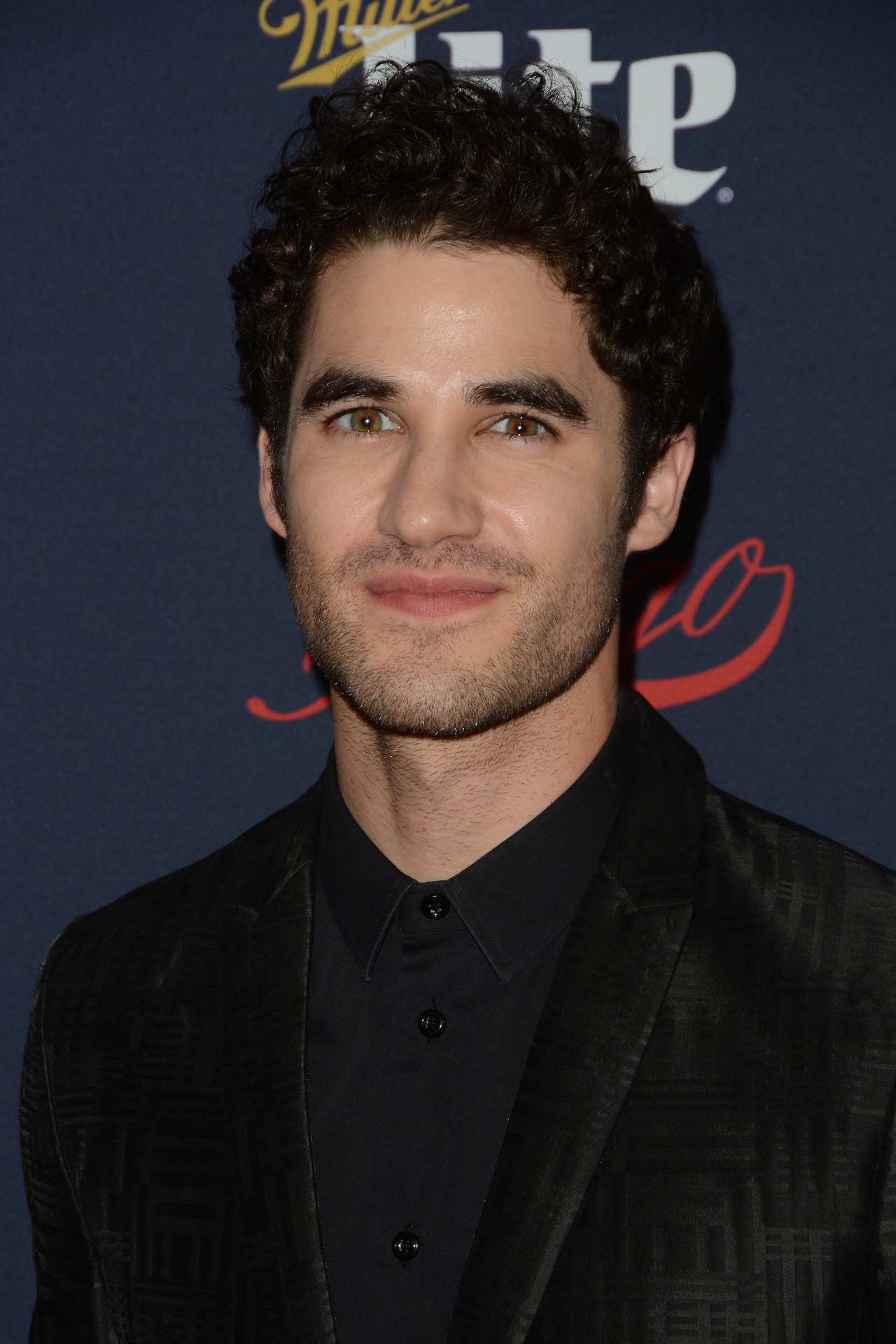 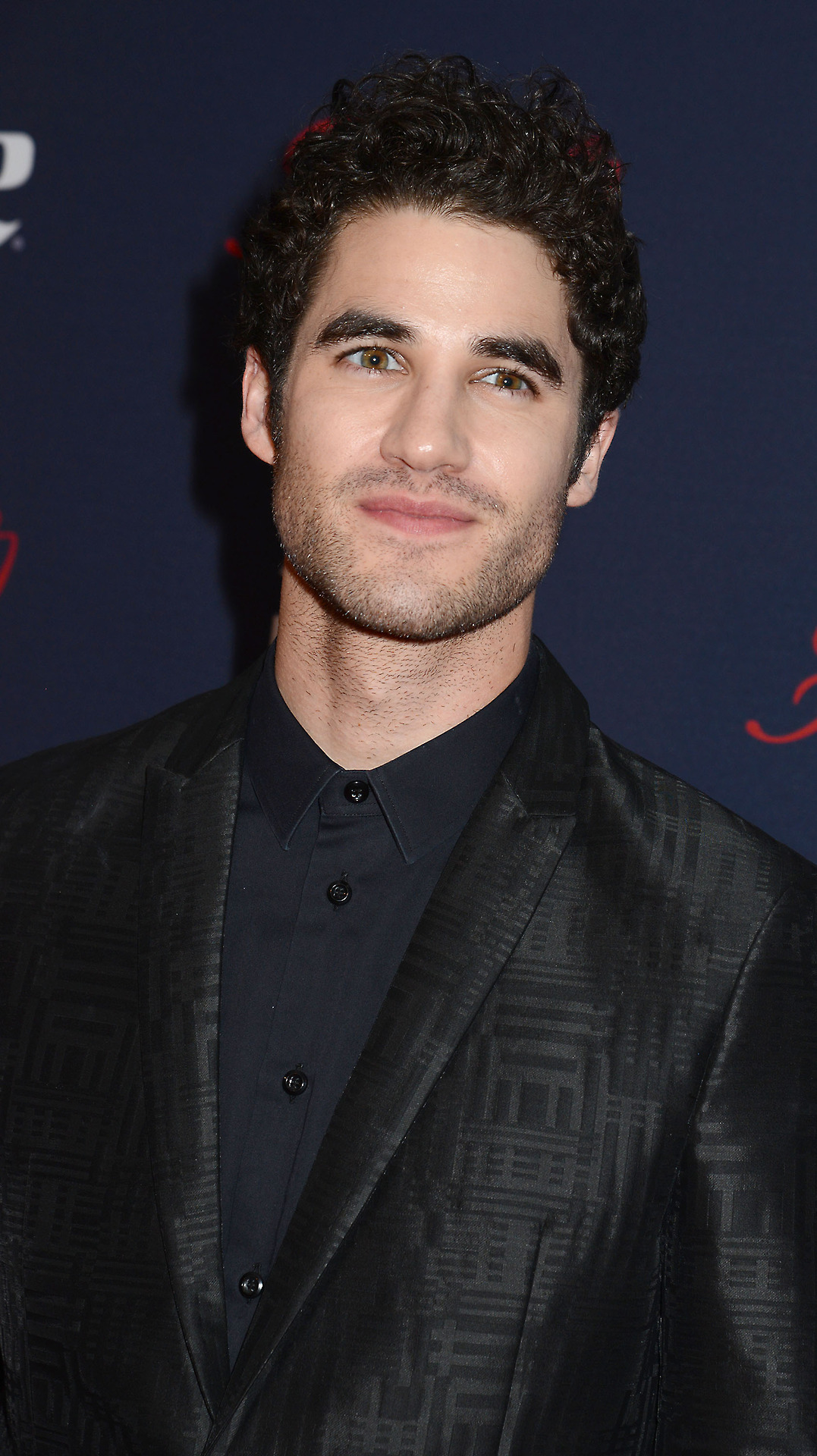 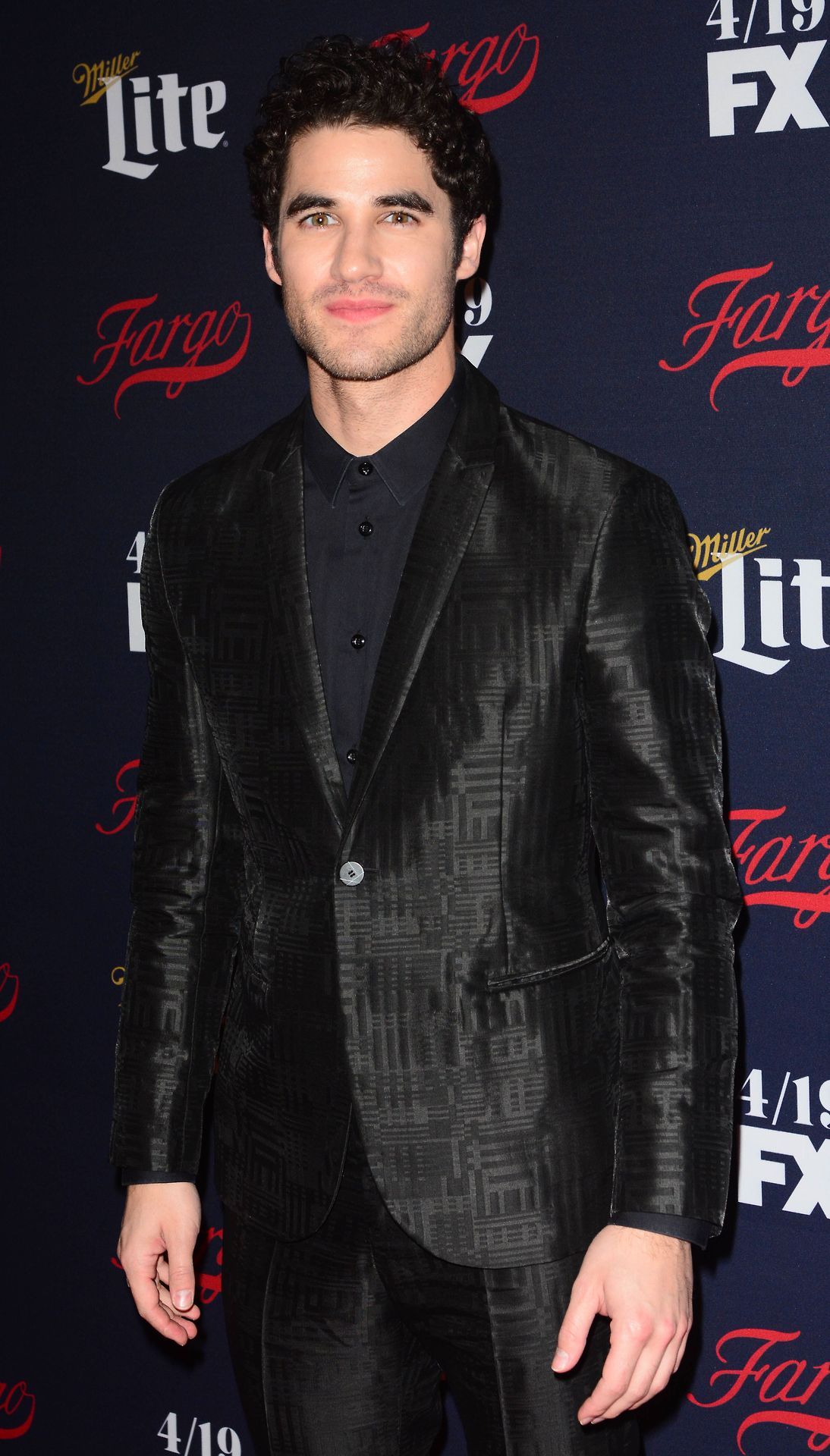 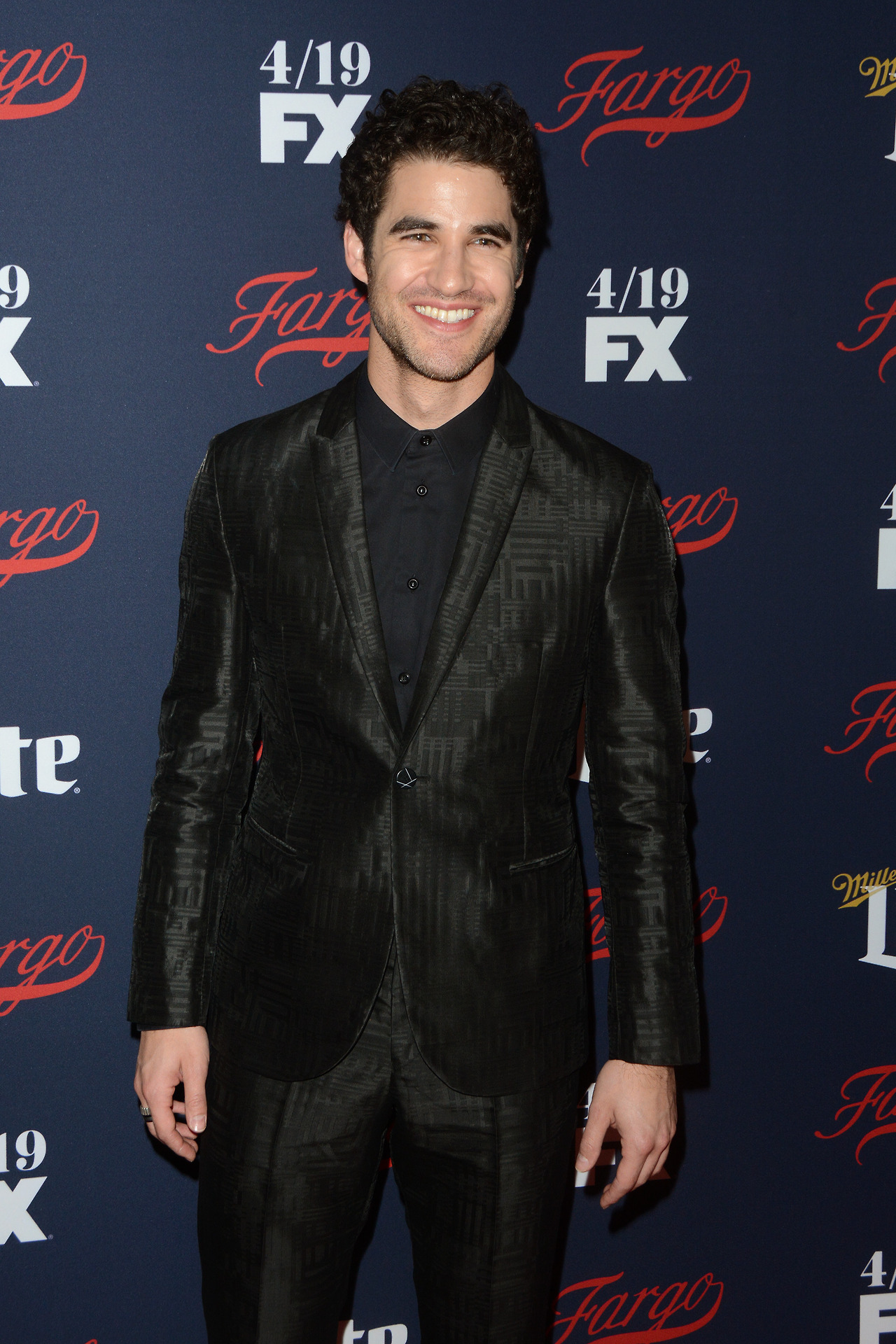 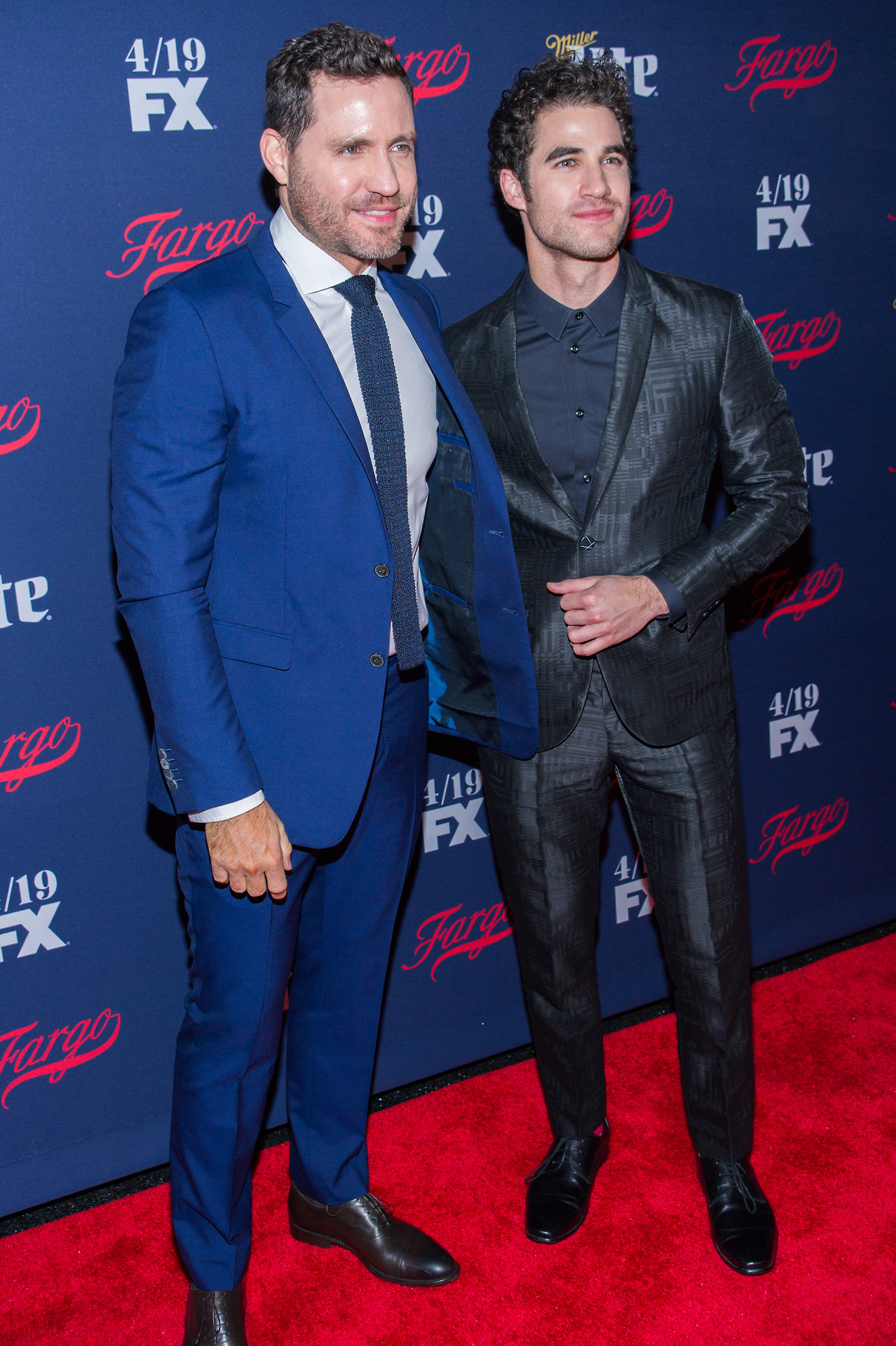 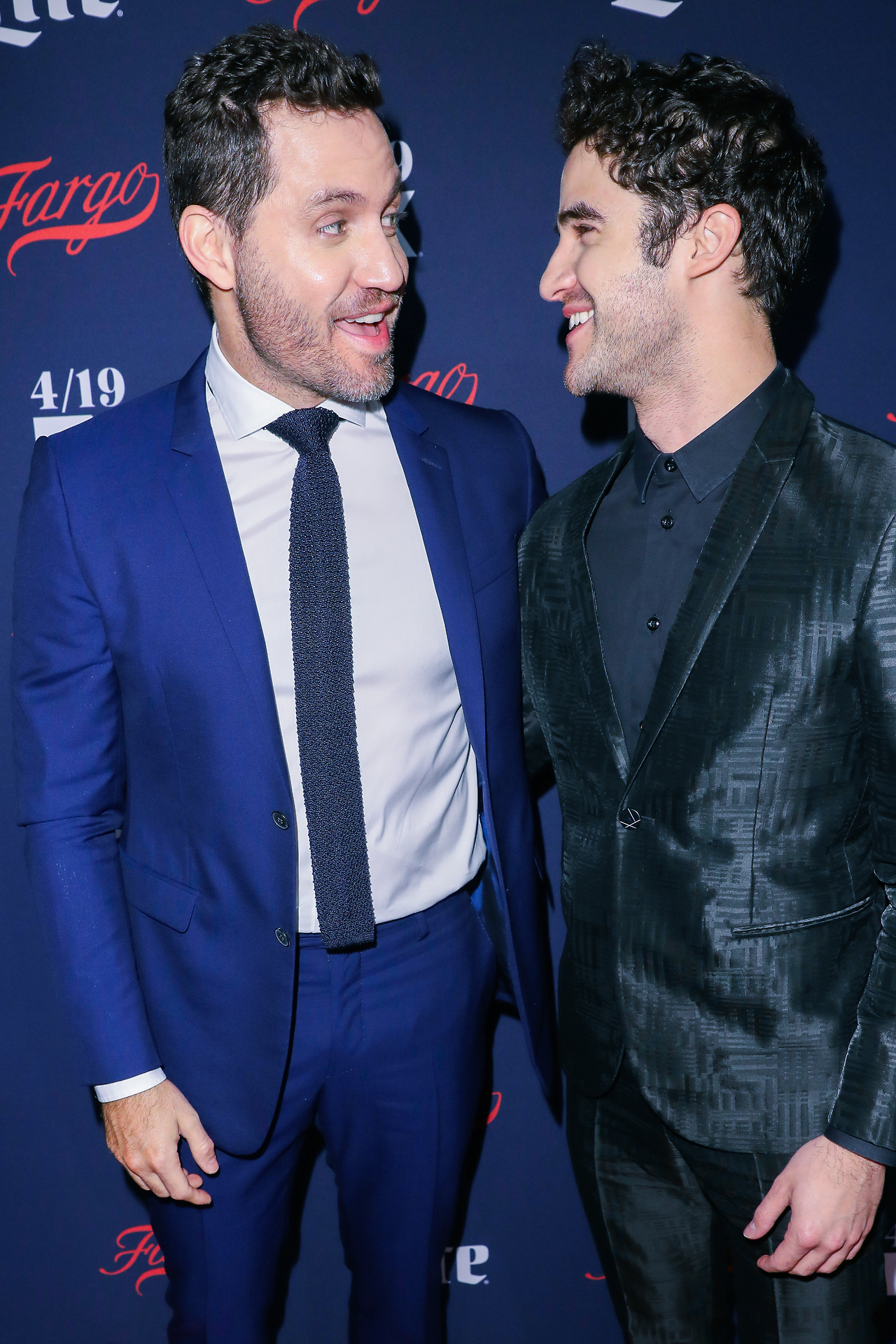 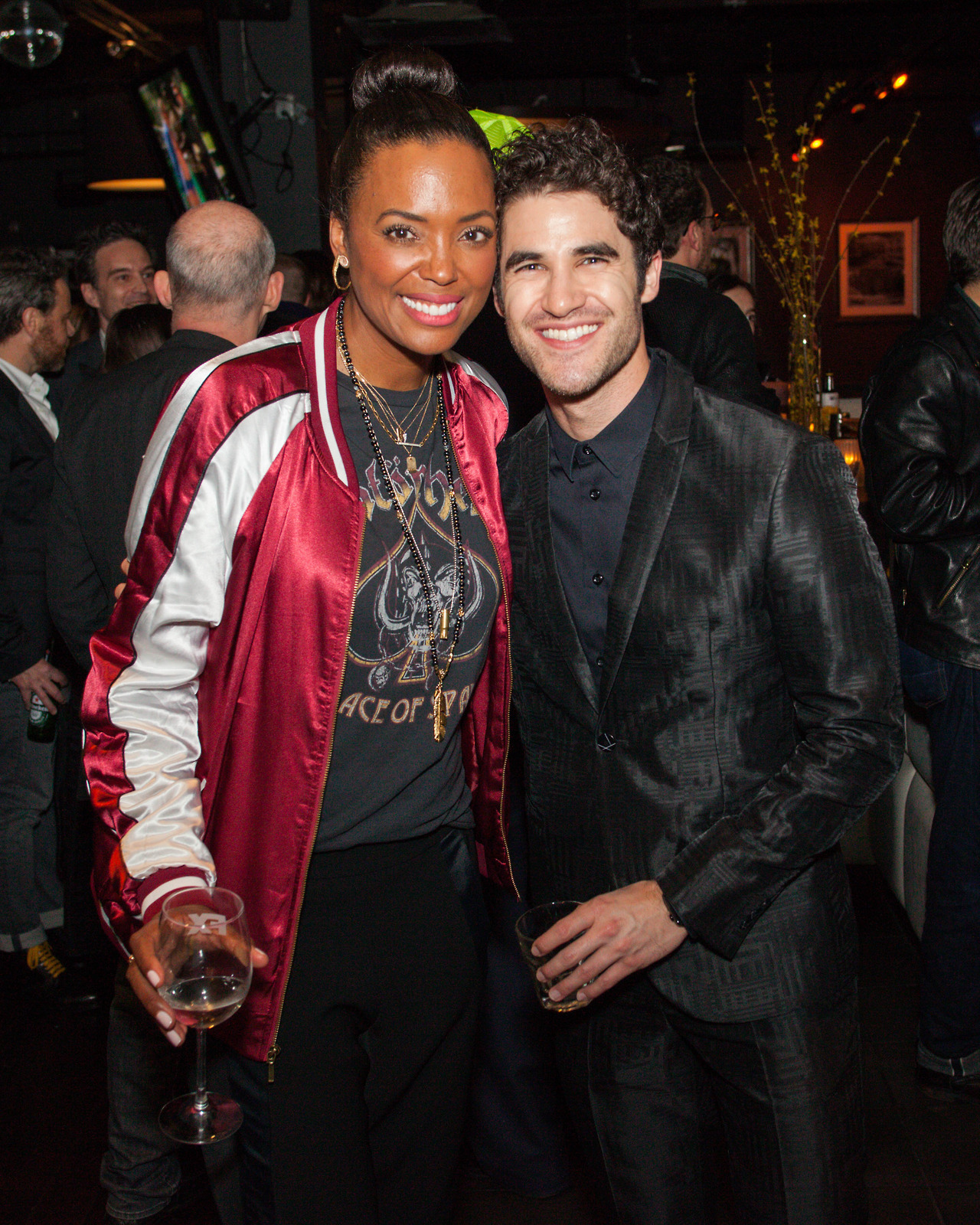 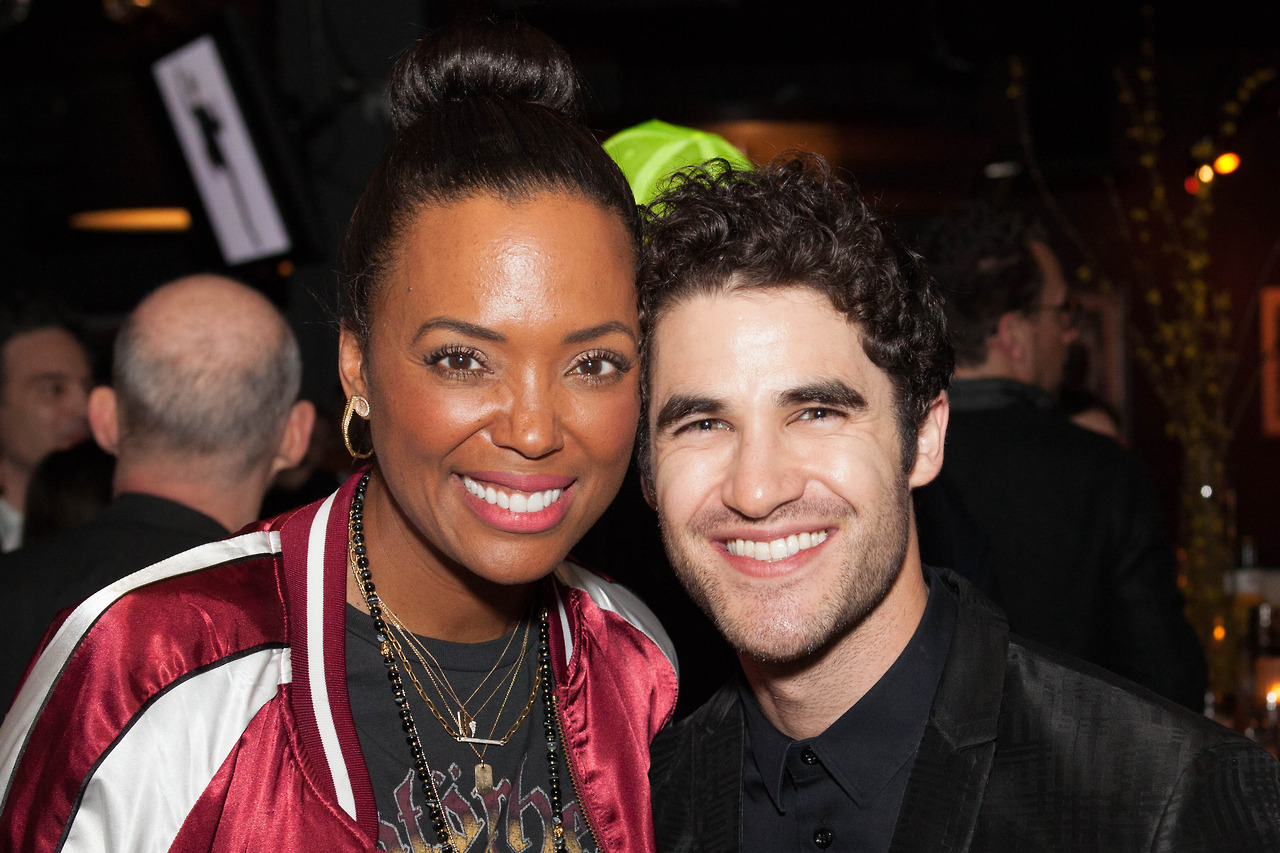 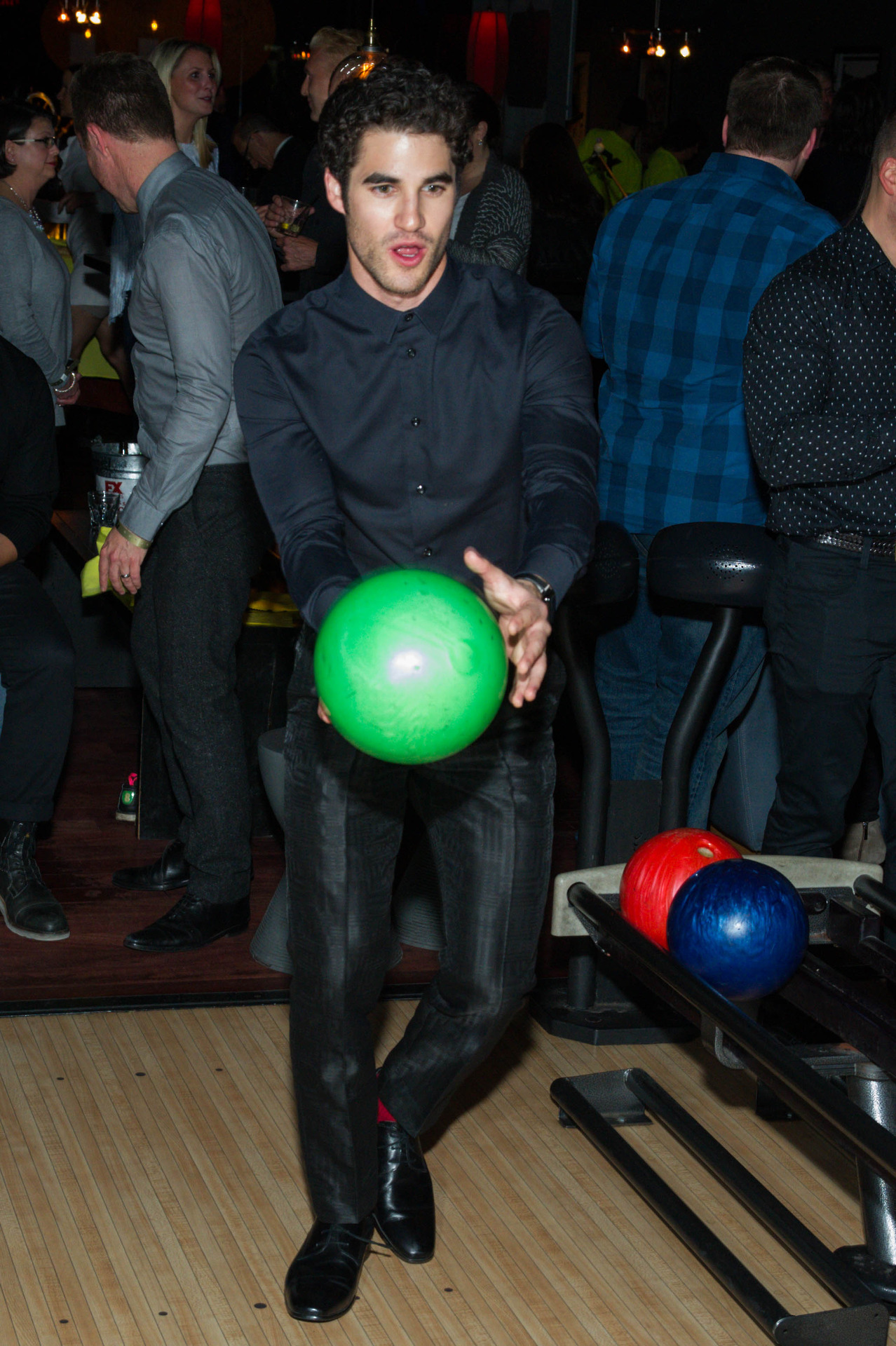 Short but interesting interview.  It almost sounds as if the Versace/Cunanan story has been in discussed by Ryan Murphy and Darren for a while.  I am very glad that Ryan has faith in Darren to do this project, not just because American Crime Story--as well as Ryan himself--is so revered, but because there are other Filipino actors who Ryan plausibly could have chosen.  It does warm my heart that Ryan has faith in Darren, and I agree that Darren is fortunate to have been chosen for the role of Cunanan.  This is a great opportunity.

The psychology of Cunanan obviously will be very significant for Versace:  American Crime Story.  It's interesting to hear Darren say that he will be asking at what point could Cunanan be me or you; at what point did Cunanan make a decisive turn spiraling into darkness?  And what were the factors that led him to that direction?    I like that Darren agrees that representation does matter.  I think, however, that employers/show runners do not necessarily need discriminatory intent in order for a lack of representation to occur.  The end result still is that many people of color, women, people within the LGBTQ community, and people with disabilities are sorely lacking in the entertainment industry, as Ryan so admirably recognizes.   What does it feel like to be a child or a young person watching TV or seeing films to see such a lack of representation?  How does a child or young person reconcile why he or she sees so few people like himself or herself being represented?   How does that make him or feel about him/herself?   As time goes on, a smaller percentage of the population in the U.S. will be (non-Hispanic) white.  It will be more and more striking however, if the percentage of actors shown on our TV sets or on the big screen continue to  be overwhelmingly white.   However, on the other hand, I recognize that in the world of entertainment, there are other issues to be considered, such as which applicant is the most qualified for the role (in the opinion of the show runner) , as well as marketability connected to an actor.

FX Networks’ upfront gathering in New York on Thursday night was short on ad sales pitches and long on pitchers — of Guinness, Sam Adams, Corona et al — as stars turned out to bowl and banter with media buyers.

Darren Criss was all smiles as he made the rounds and talked of his preparations to play the killer in “American Crime Story: Versace,” which begins shooting in a few weeks.

I wonder if Darren had a chance to say hi to Ewan McGregor (since Darren also is a big fan of Star Wars)?


This  is a cute pic of Darren with fans at the FX Upfront. 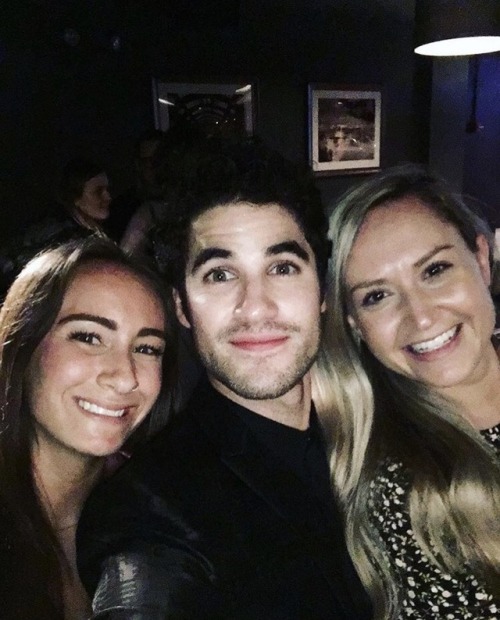 Darren Criss wrote:It's gonna be a dark journey.  I'm very careful with my adjectives becasue obviously I'm excited - but it' not exactly a chipper walk through the park.  It's a very dark place to be for a couple of months, several months.  But I'm happy to be working with those people and I'm happy to be back in the Ryan Murphy family.

I like how careful Darren is with his words--emphasizing that on the one  hand, it will be a dark place for him to try to be in the head of a serial killer, but yet on the other hand, he is thrilled to be a part of this project, to be working with those involved with the project, as welll as happy to be working with Ryan Murphy again.

Could this be his most difficult role so far ?

I think Hedwig and the Angry Inch was the most physically challenging, due to it essentially being a 2-person musical for over an hour and a half (without intermission), with Darren's role doing the majority of the songs, choreography and dialogue, which also required Darren to be quick-thinking, in terms of replying to comments that the audience threw at Hedwig.

I think playing Cunanan, a psychopath, a serial killer, will be the most emotionally draining and disturbing role.  I hope during the months they are filming, that Darren makes sure to spend time with Mia, Chuck, his parents, and friends to make sure he maintains some mental and emotional balance.

I actually meant TV/movie role. It's sure that Hedwig wasn't an easy role!

But I'm confident about Darren and Versace. Actually, I kind of worry about myself. Very dark stories based on real facts are not my cup of tea right now

Oh ok.  Yes, I think this will be the most challenging TV/film role (assuming Smitten! is not going to require the same type of challenges as Versace:  American Crime Story, which I think is safe to assume).

I also have confidence in Darren's acting talent.  I have confidence in Ryan Murphy's directing talent as well, of course, although I do not know how many of the episodes will be directed by Ryan (especially since there is overlap in the filming for the Katrina: American Crime Story, Season 2).   I hope Ryan directs many of the Versace episodes, but even if he does not, I'm sure Ryan has faith in the other directors.

Jeremy wrote:Very dark stories based on real facts are not my cup of tea right now

I get that, Jeremy (because very dark stories based on real people has not been my cup of tea for a very long time.  I finally saw the film Lion, and parts of the film had me crying a bucket of tears). 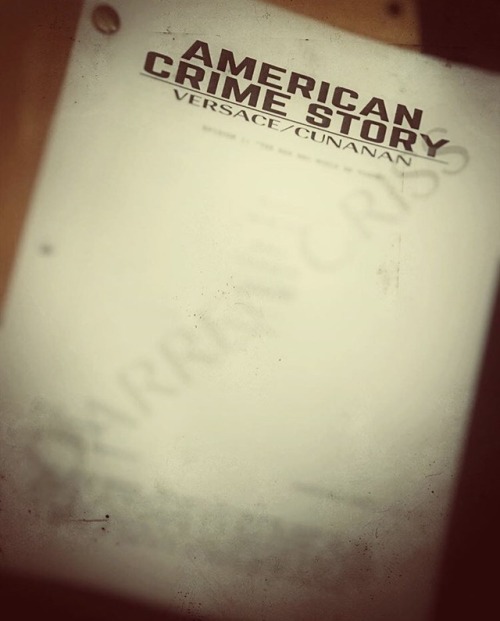 
lenarockerhall: Wifey I’m so excited for you!!! 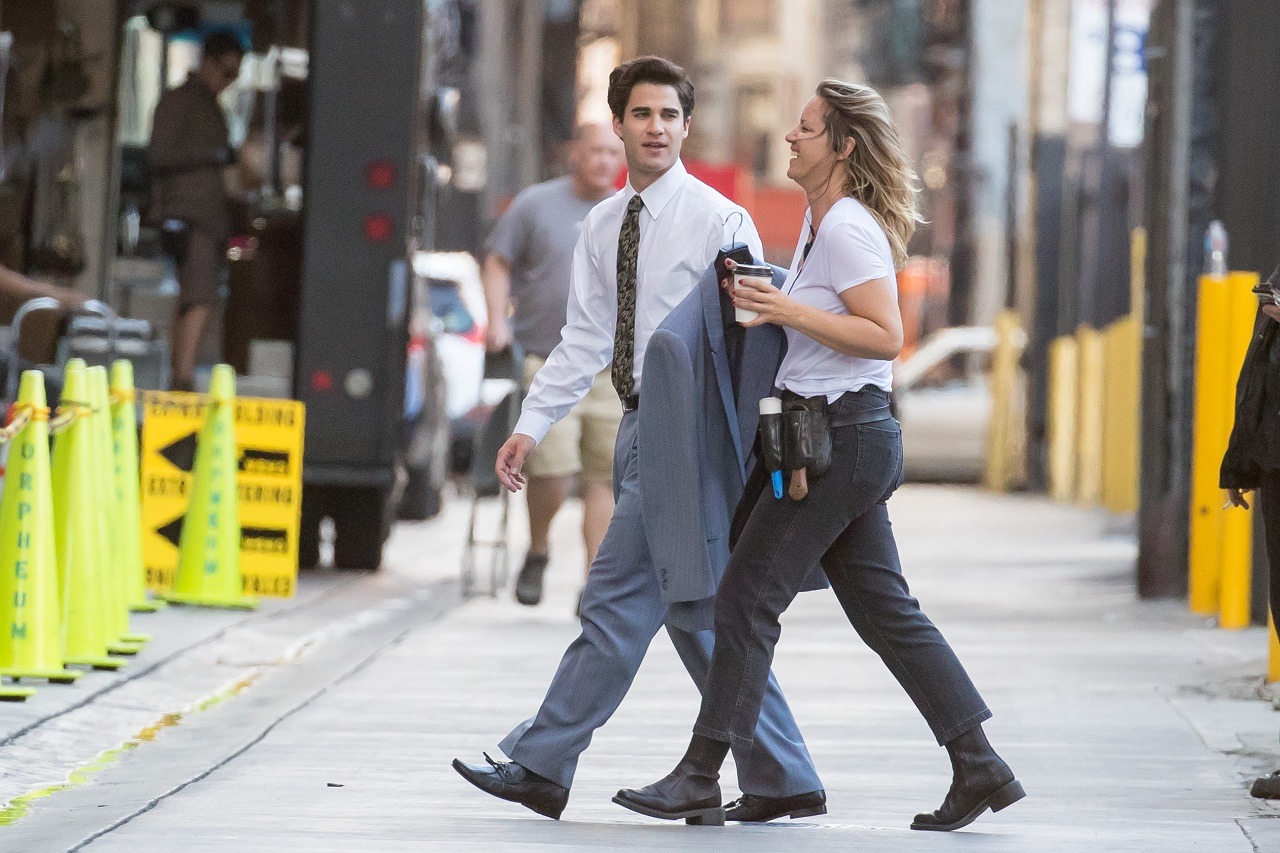 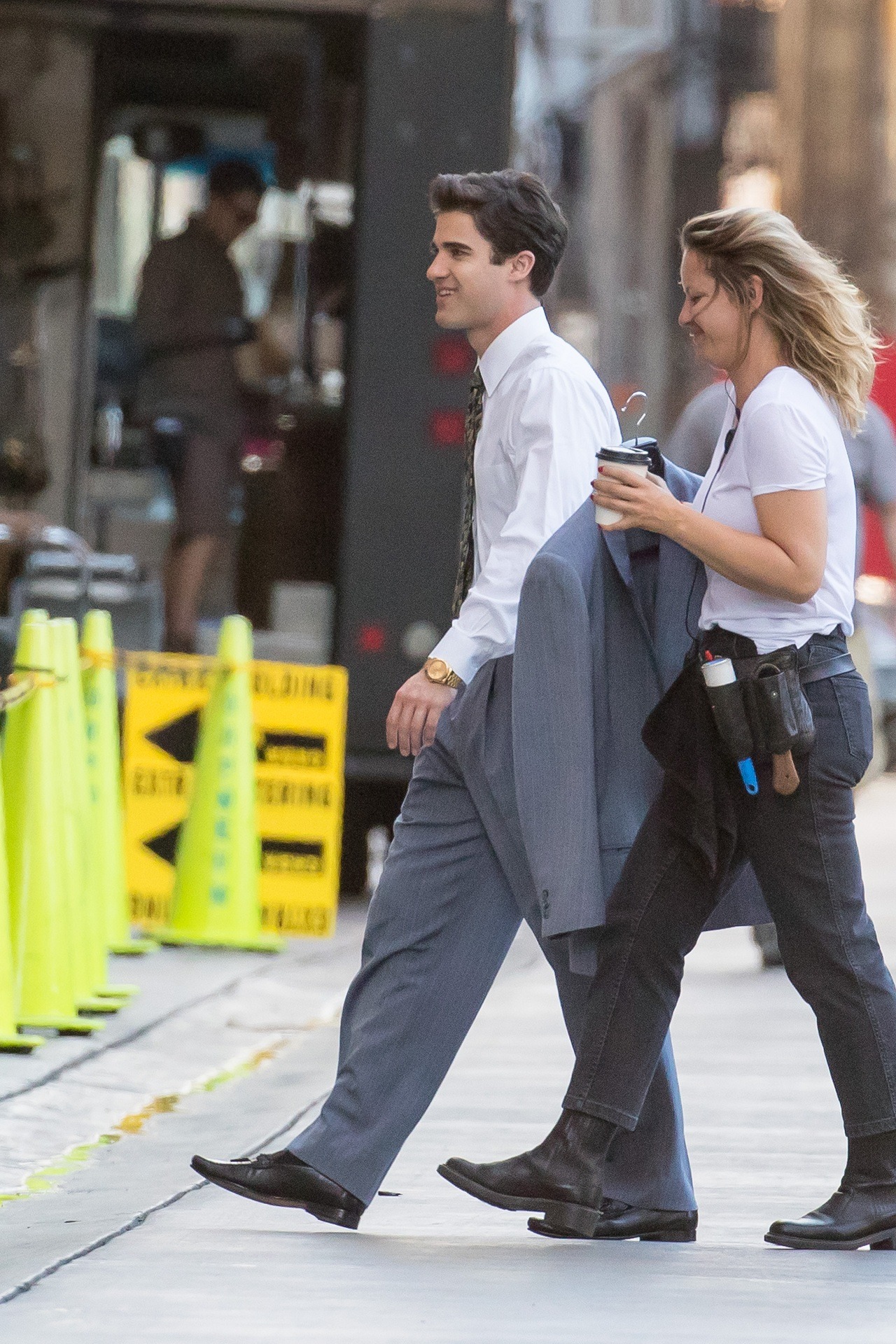 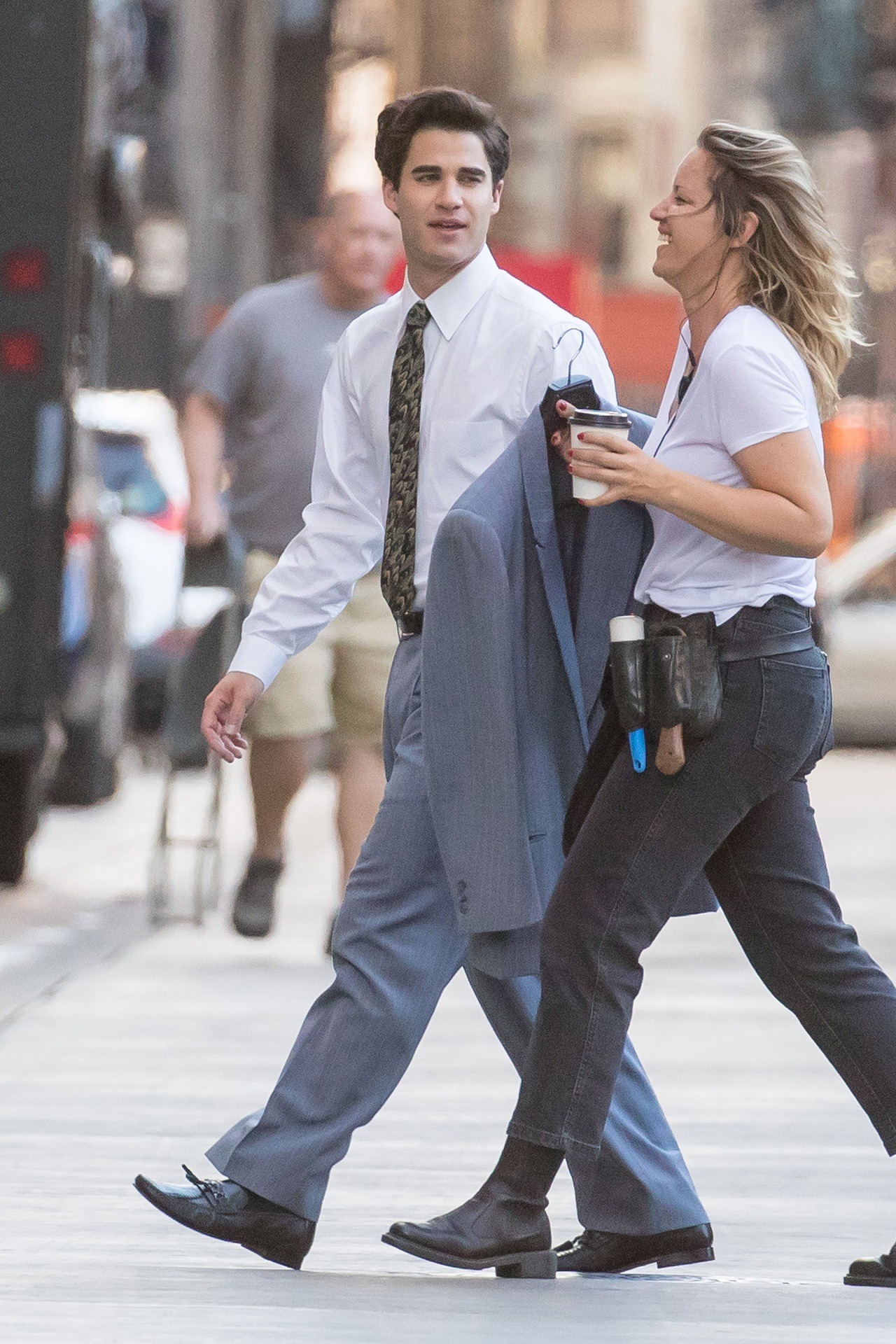 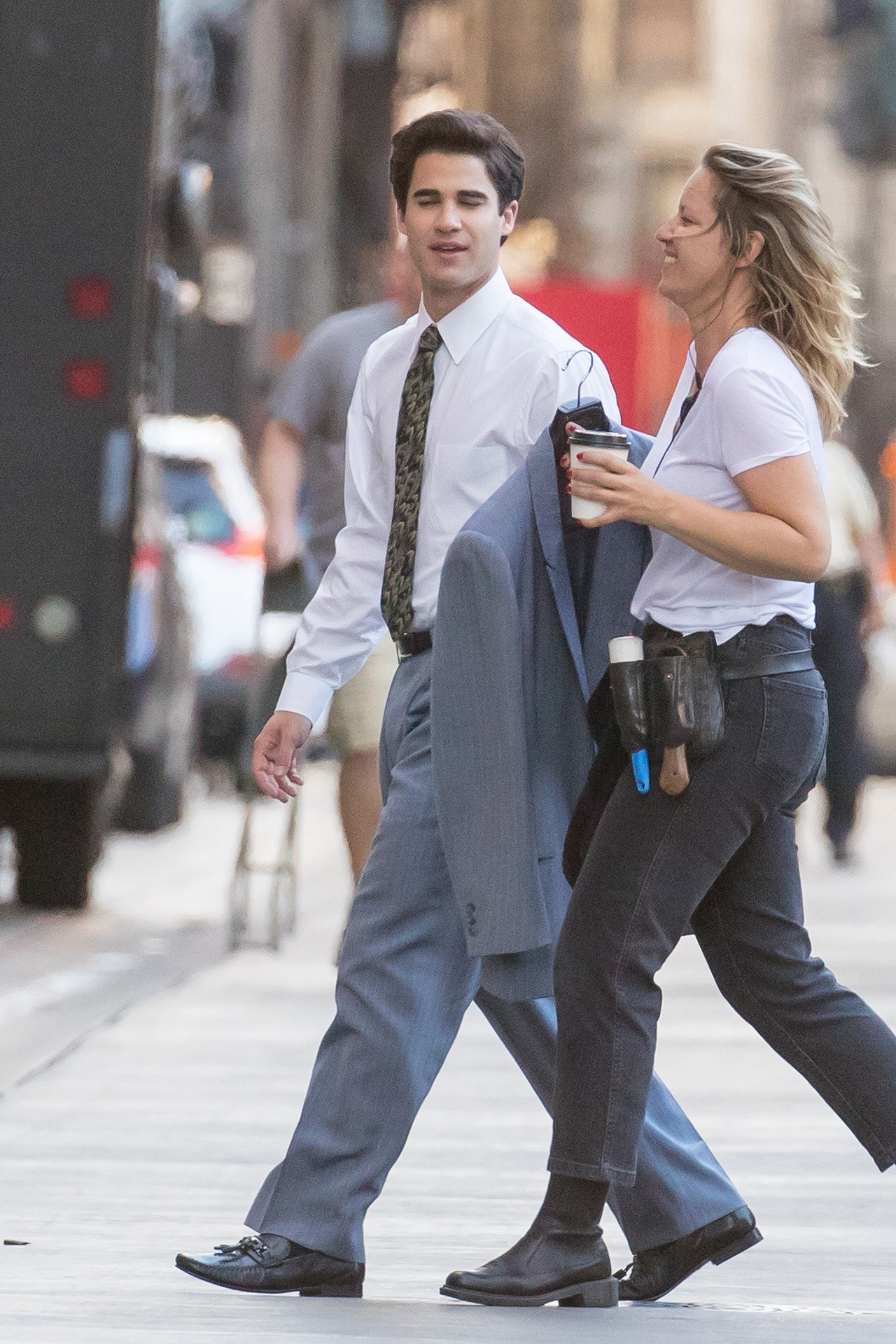 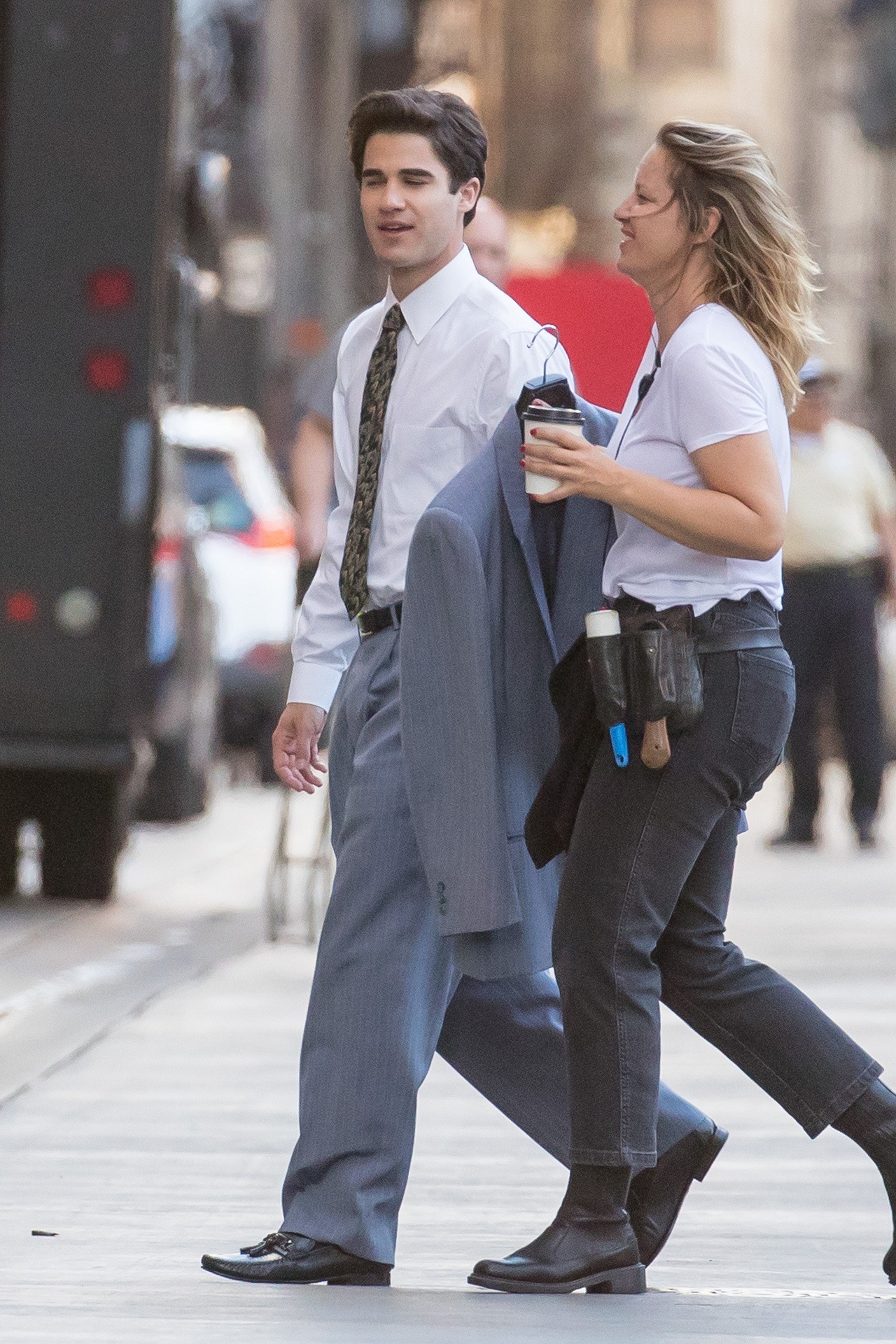 It looks like they trimmed Darren's eyebrows.  Did they put make up on his eyes?

Personally, it's okay if you don't use the spoiler tag.

I don't think we have used it for the Music Meister role.  And, this time, we already know what will happen and how it will end !

Guest
I don't need spoiler tags either, I know I'd look at everything anyway.

Maybe just to give each other a little warning if it's any sort of gruesome scene, like these pictures of Edgar Ramirez as Versace after he's been shot: 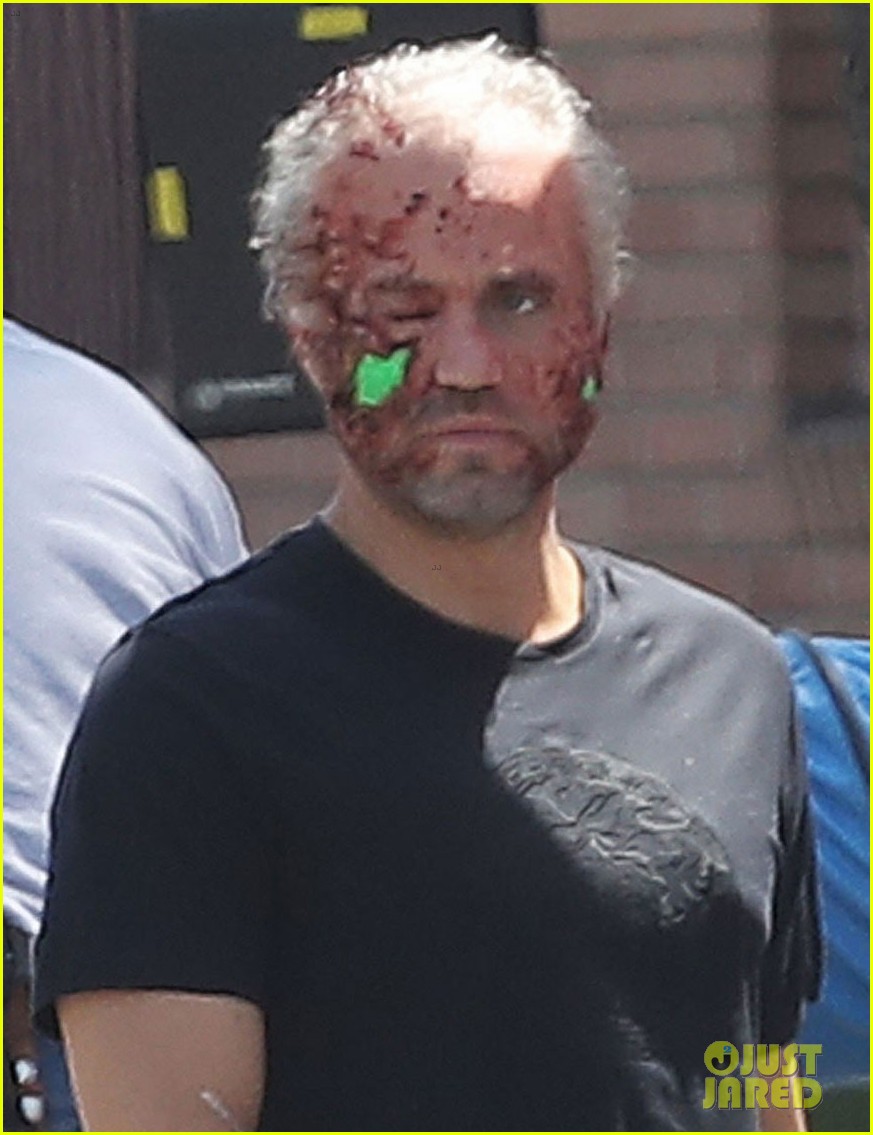 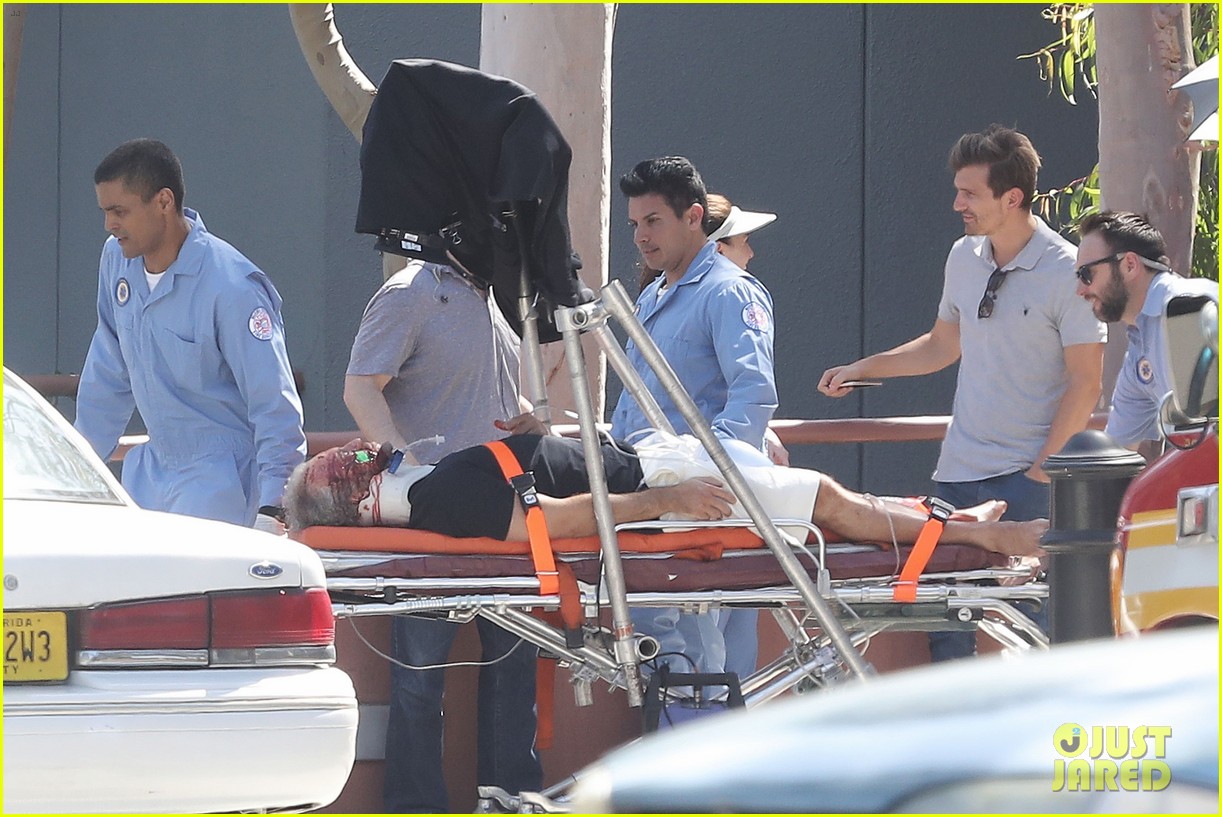 @Poppy wrote:It looks like they trimmed Darren's eyebrows.  Did they put make up on his eyes?

I've been wondering that too and not totally sure. Also whether or not he's wearing dark contact lenses.

Thanks for your input, guys.

Lin, I agree about using spoiler tags for graphic pics of the actors who play the victims of Cunanan.

I'm not sure about dark contact lenses.  I would need to see more close-up pics.   But the shape of his eyes do look very different.

An article about Gianni Versace's home.  I felt sad looking at the interesting rooms, thinking about how much time and care he put into decorating his home. 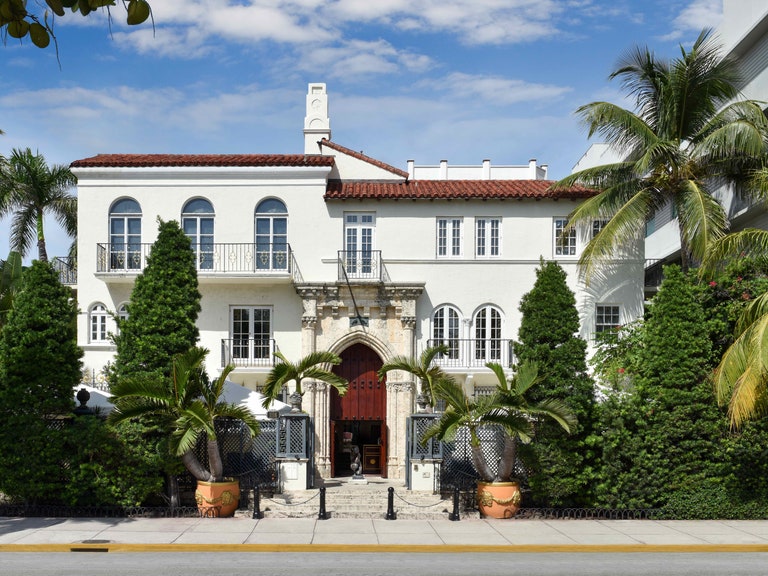 The current exterior of Casa Casuarina, which was two properties purchased by the late fashion designer and merged into one. 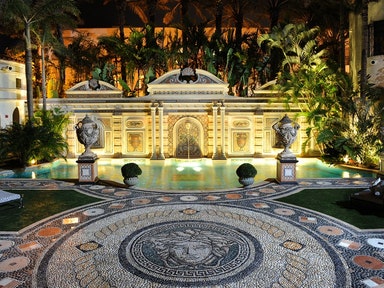 Details about Ryan Murphy’s third installment of American Crime Story have been slowly trickling out for weeks: The latest season will explore the 1997 murder of fashion designer Gianni Versace, who will be played by Edgar Ramirez; Versace's killer will be played by Murphy regular Darren Criss; the designer's sister, Donatella, will be played by Penélope Cruz; and on April 7, it was announced that Ricky Martin will take on the role of Antonio D'Amico, Versace's longtime partner.

Other particulars, though, have been vague. Filming of the ten-episode season is set to start later this month in Los Angeles and Miami, where Versace was shot on the steps of his Miami mansion, a home he purchased in 1992 and resided in until his death. Known as the former Versace Mansion, it is currently a boutique hotel, The Villa Casa Casuarina—and will more than likely be one of the filming locations for Versace: American Crime Story.

"At this time, we are not allowed to discuss this question [regarding filming American Crime Story] due to negotiations taking place," a representative for The Villa Casa Casuarina told AD.

His house looks nice to me.

Penelope Cruz and Ricky Martin are two big names (and also stars from the nineties, I don't know if it's intentional).

Jeremy wrote:Penelope Cruz and Ricky Martin are two big names (and also stars from the nineties, I don't know if it's intentional).

I know that Ryan Murphy looks at small details, so I wouldn't be surprised if it was intentional that Penelope and Ricky are picked because they were stars from the nineties.

FYI for anyone interested, the TV show, Dateline, is reporting on Versace's murder on Friday, April 28 on NBC.  (via gleekto)

Re: The Assassination of Gianni Versace: American Crime Story