Guest
I'm having Every Single Night on repeat at the moment. It's such a sunshine song!

Here's another fun video of Darren and Chuck.  Chuck cracked me up at the end.

I can't post the actual video here, so go to onwithmario.iheart.com.


I like Mario's interviewing style.  He makes conversation flow and he does so, making it look easy. 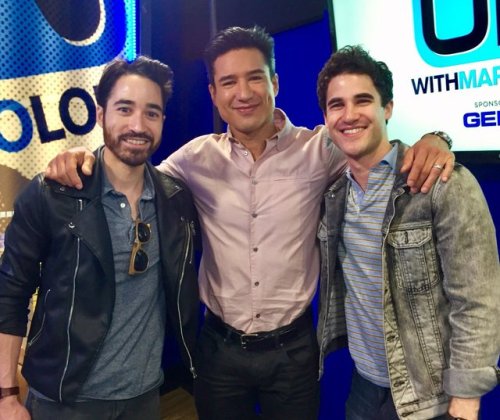 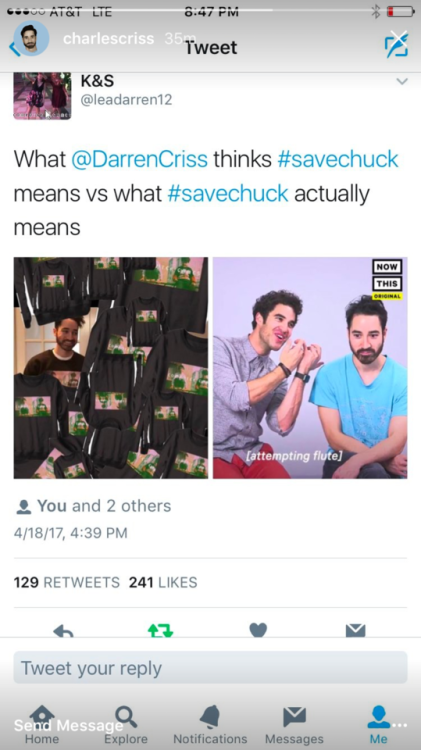 Another Youtube video of the Mario Lopez interview with Darren and Chuck:

Just look at these two.  I bet they were never bored at home as long as they were together. 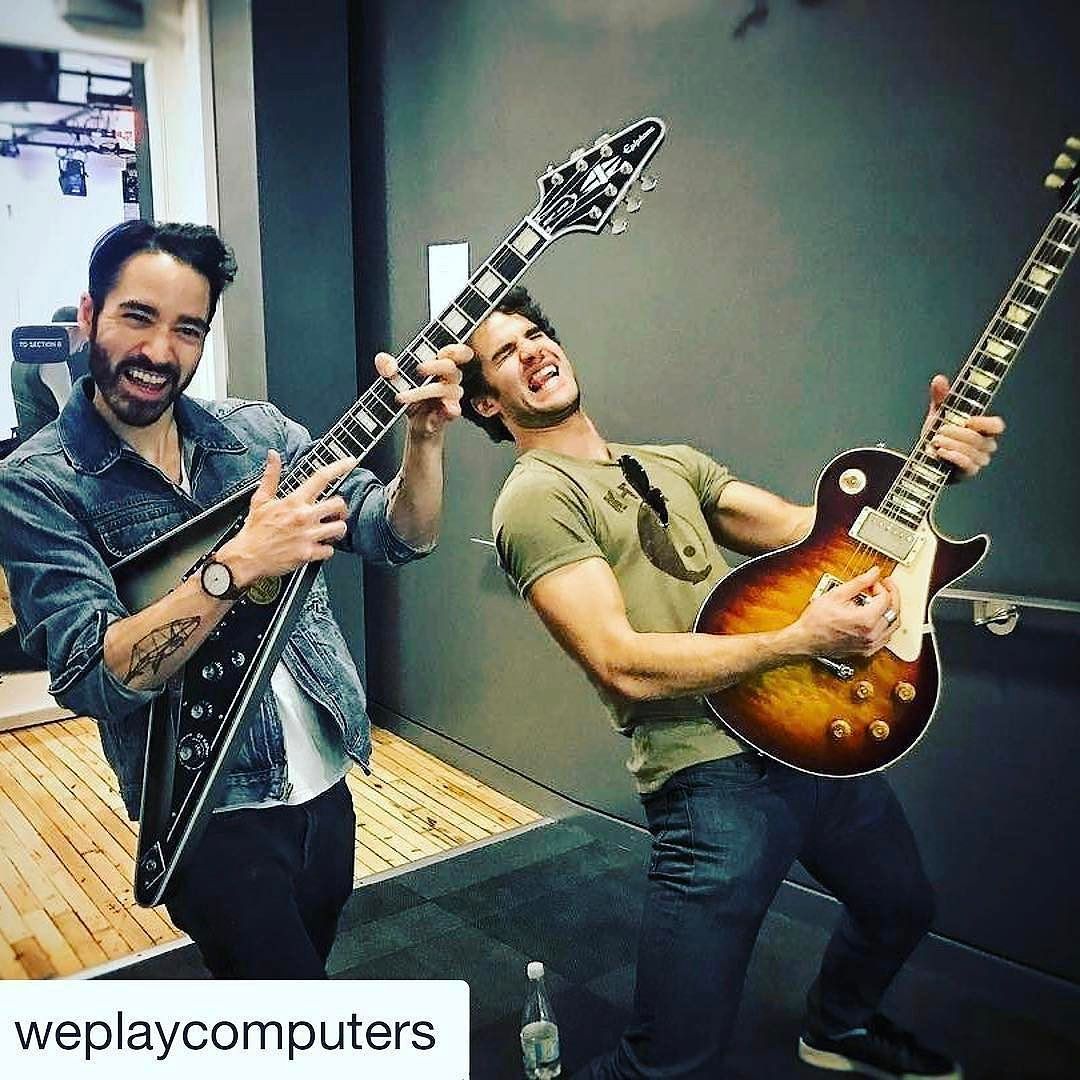 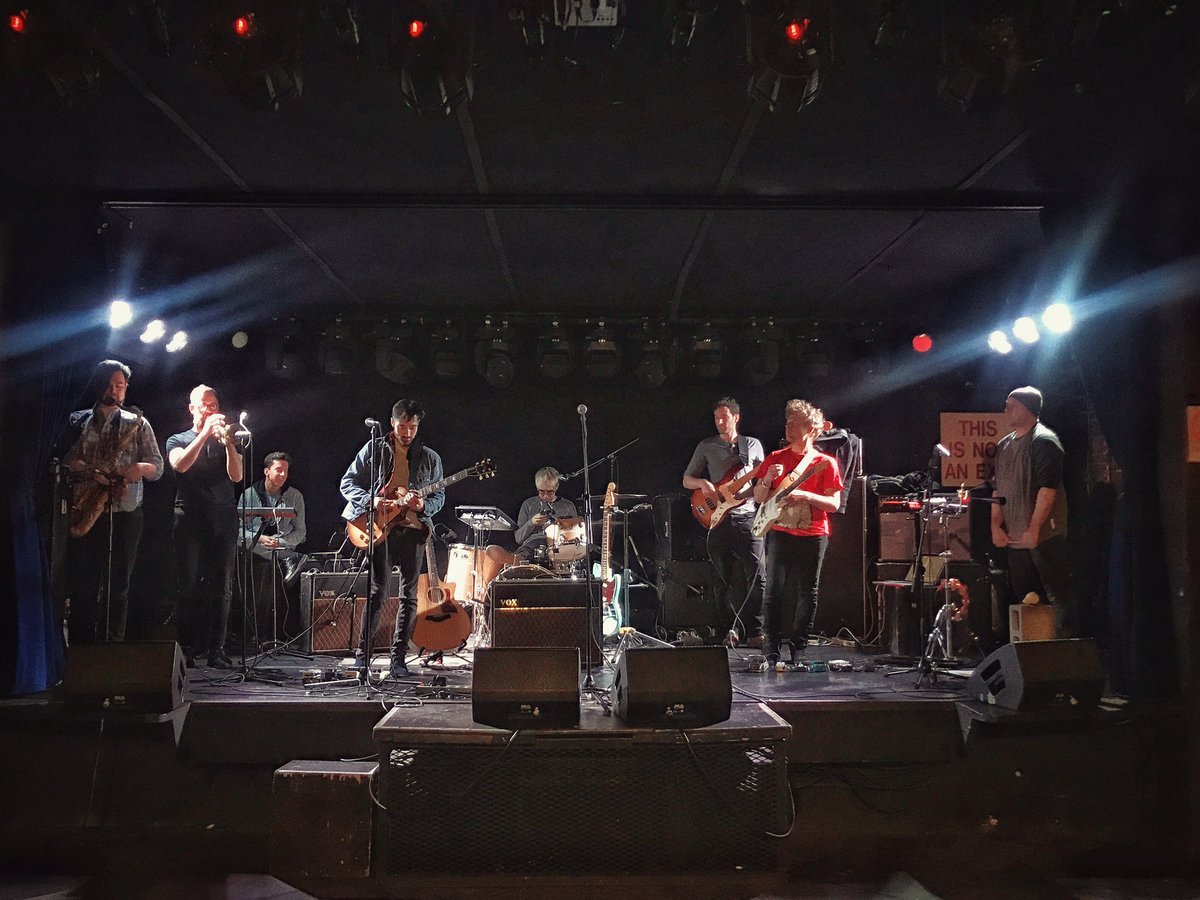 @weplaycomputers: Check 1, check 1… no but like literally this was our first soundcheck for our first show, so yeah, mic check 1.

Computer Games is having their first Los Angeles concert on June 4! 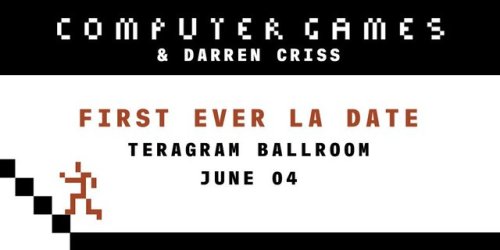 
@DarrenCriss: You wanted an LA show? So did we. Chuck & I will be playing @TeragramLA on 6/4! Sign up at http://weplaycomputers.com for fan pre-sale access.

In addition to playing songs from their debut album Lost Boys Life EP, Darren will be performing a solo set.

Tickets go on sale Wednesday, May 3rd at 10am/PT and are available at here.

Last month the group released their debut album entitled Lost Boys Life EP, which received astonishing praise and garnered media attention. The 4-song EP's lead track "Every Single Night" was deemed an early contender as a song of the summer by Billboard. Entertainment Weekly labeled their sound as "a funky blast to the past in the spirit of some of the grooviest '80s superstar," while Teen Vogue described the album as "an indie gem filled with plenty of '80s pop inspiration and a dash of true DIY sensibility."

As high school kids, Darren Criss and his older brother Chuck spent nearly every afternoon playing music in their basement for hours upon hours. With Chuck on guitar and Darren on drums, the San Francisco natives tapped into everything from British power-pop to Bay Area punk to create their own rowdy breed of garage rock. Though they'd always planned on forming a bona-fide band together, each ended up striking out on his own path: Darren embarked on a singing/acting career that's included the creation of YouTube sensation StarKid, starring on Glee and in the forthcoming third installment of American Crime Story, and a string of successes on the Broadway stage. Meanwhile, Chuck joined acclaimed indie-rock act Freelance Whales, with whom he recorded and toured with as a multi-instrumentalist and songwriter for several years. But in 2016, the two finally decided it was the right time to revisit their teenage ambitions and launch a guitar-fueled alt-pop band that they've named Computer Games.

Darren and Chuck share songwriting duties for Computer Games, drawing on their indie sensibilities to build the ideal backdrop for their often-introspective lyrics. In the making of Lost Boys Life, Computer Games went for a chocolate-in-my-peanut-butter effect by enlisting the pop expertise of New York City-based music production team THE ELEV3N. Known for their work with artists like Meghan Trainor and Bebe Rhexa, the Criss brothers hoped THE ELEV3N's production sensibility would add a more contemporary, familiar sound to their initial left-of-center tracks. The result was just that: a shiny sheen polish on scrappy garage pop. And for the mixing of Lost Boys Life-an EP that gracefully blends raw live performance with electronic elements-the band looked to their long-time hero, producer & mixer Tony Hoffer, who's responsible for a number of albums that shaped the Criss brothers' musical background: Phoenix's Alphabetical, The Thrills' So Much For The City, and Beck's Midnite Vultures, to name a few.

Watch the lyric video of "Every Single Night" below!


Please note that the article says that Darren will also be playing a solo set!

The Teragram Ballroom site also notes that Fan Presale begins on May 2, from 10 am - 10 pm PT.

Aw, this is great!  iHeartRadio chose Computer Games as their artist of the week!  Congrats! 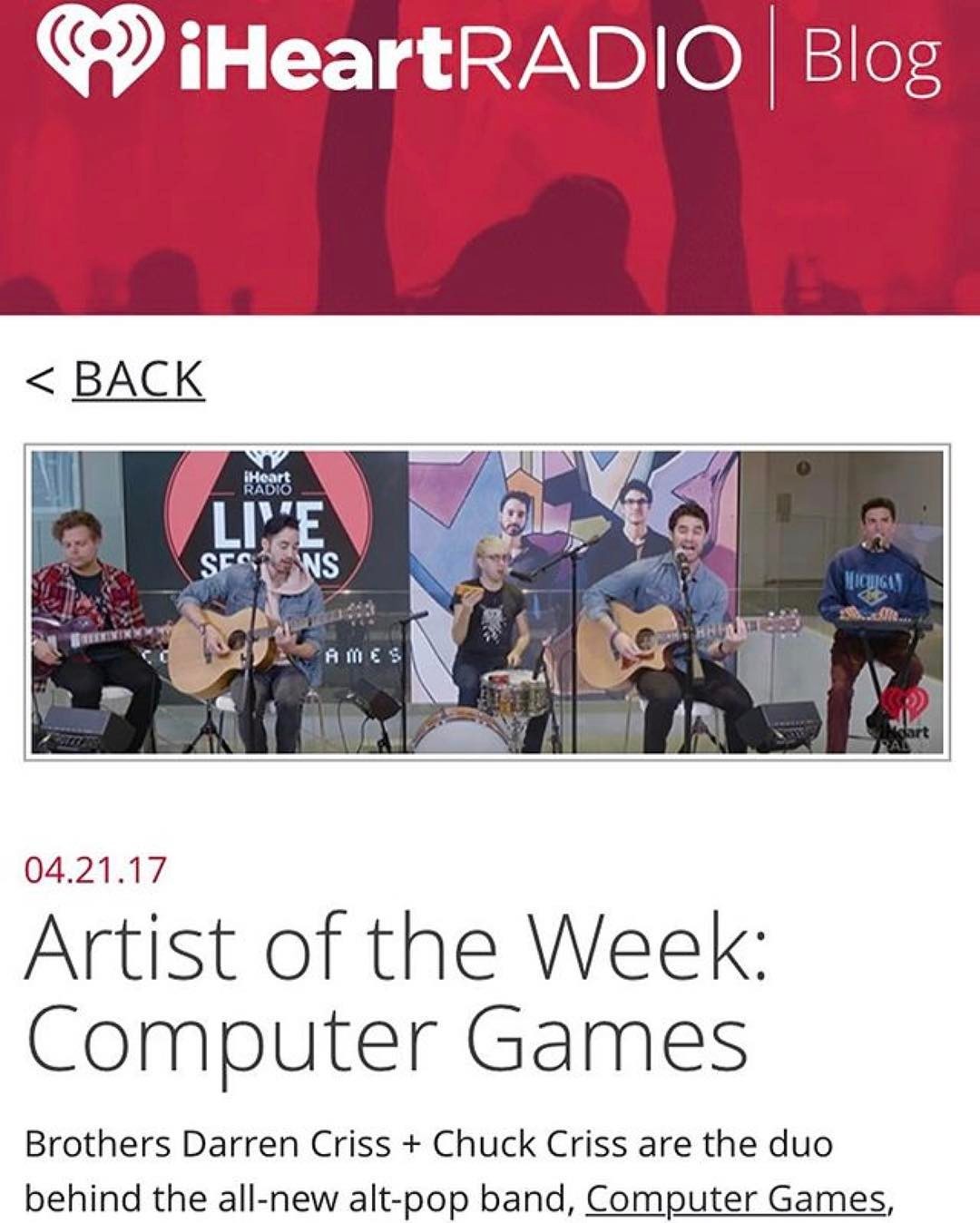 thanks for this @iheartradio ! sending

s right back at ya http://ift.tt/2qkrHFk 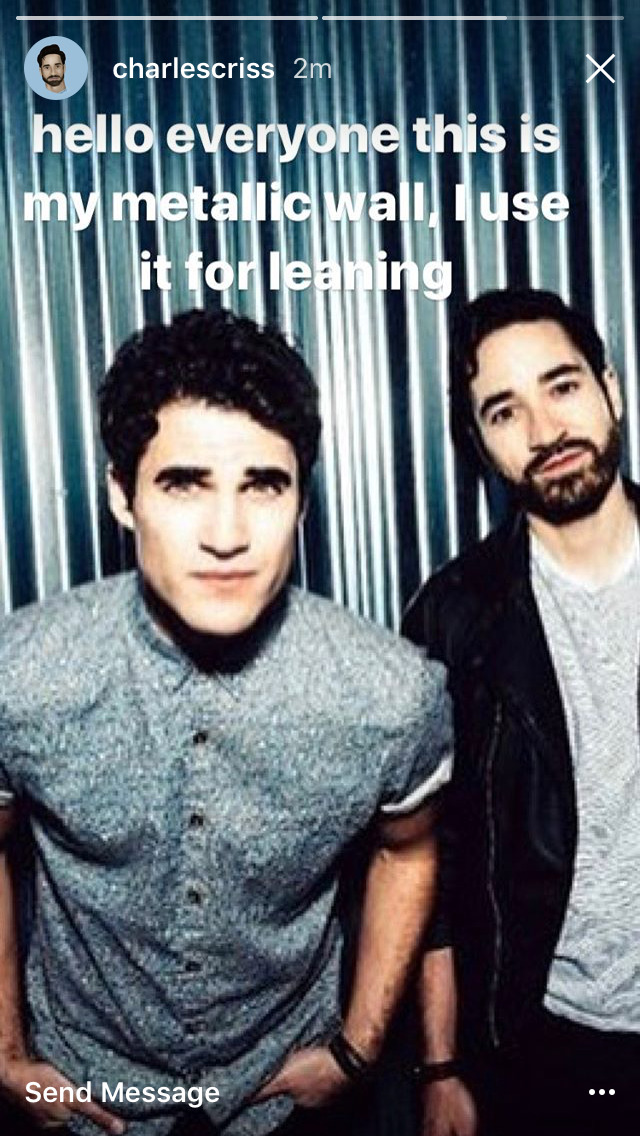 Artist of the Week: Computer Games

Combining signature sounds of the 80s, with their evident flair for contemporary pop melodies and production, the four-song EP is being released independently by the group.

“Chuck and I grew up playing computer games. We weren’t allowed to play video games, so for some reason, computer games were a loophole,” Darren told EW about the band’s name. “Plus, I like the way that it sounds because it’s sort of an all-prevailing concept.”

Computer Games recently stopped by our studios to perform an intimate, acoustic set. Check out the stirring rendition of their song “Lost Boys Life” from the performance, below:

And after that, check out the rest of Computer Games' new music on iHeartRadio and listen to your favorites on repeat, all on demand! ​​​​​​​​​

Computer Games's first Los Angeles concert will be on Sunday June 4 at 7:00 pm, at the Teragram Ballroom!

Darren also will be playing a solo set during the Computer Games concert on June 4 in the Teragram Ballroom in Los Angeles! 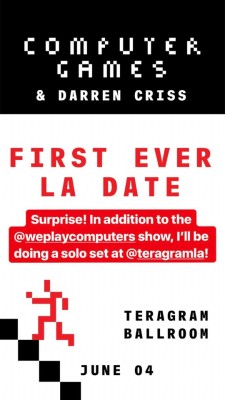 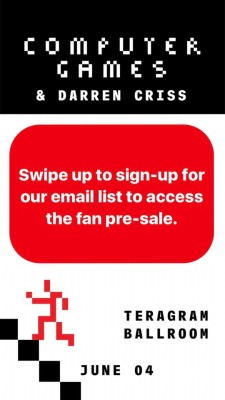 Another cute Q & A from the Criss brothers.

Darren & Chuck Criss On Who Would Win A MMA Fight Between Them & Their “Cage” Names. Watch Part 2 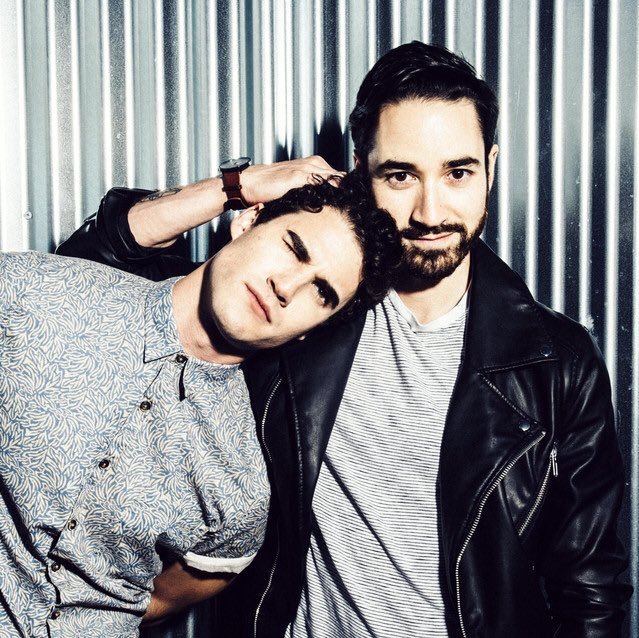 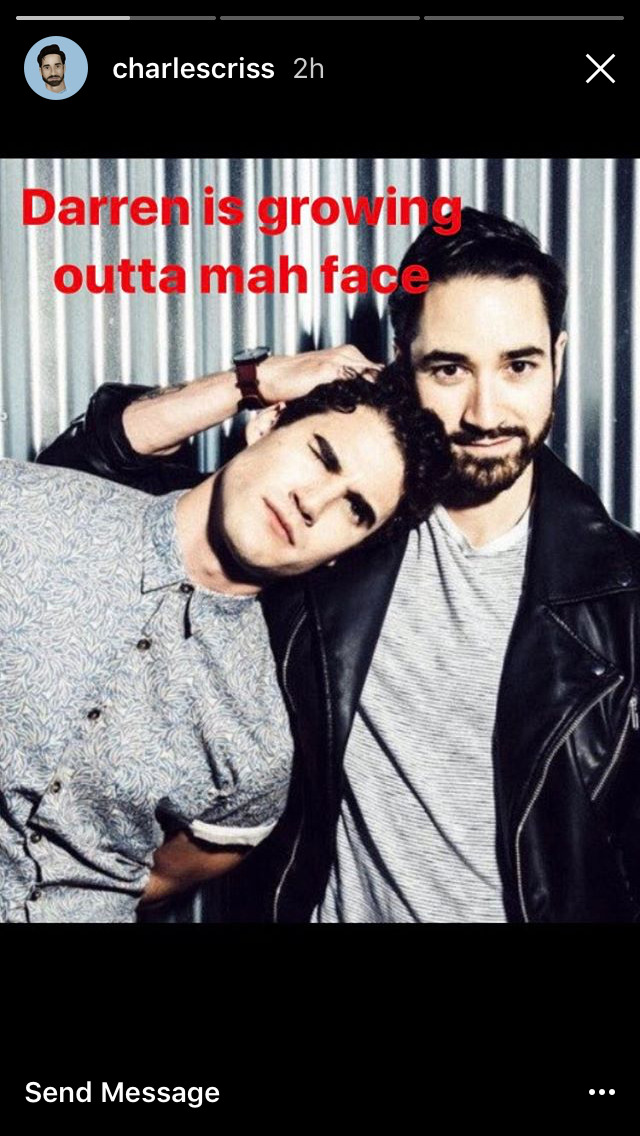 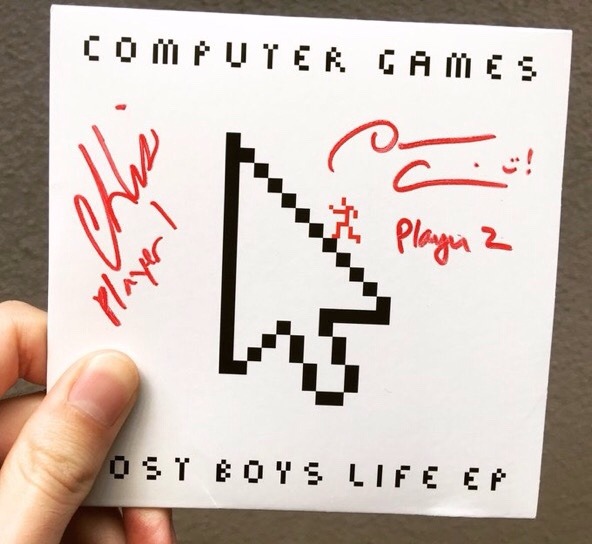 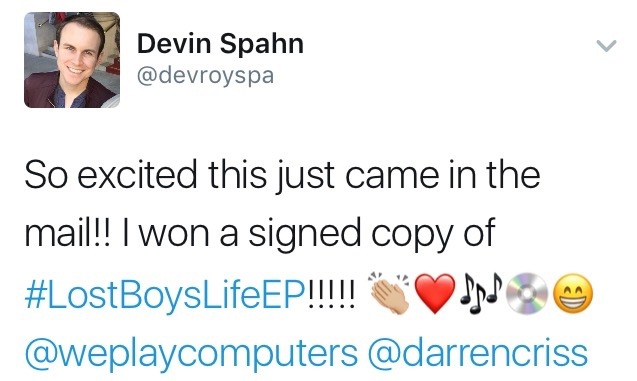 I guess this is Computer Games' profile pic on Spotify.  I like it. 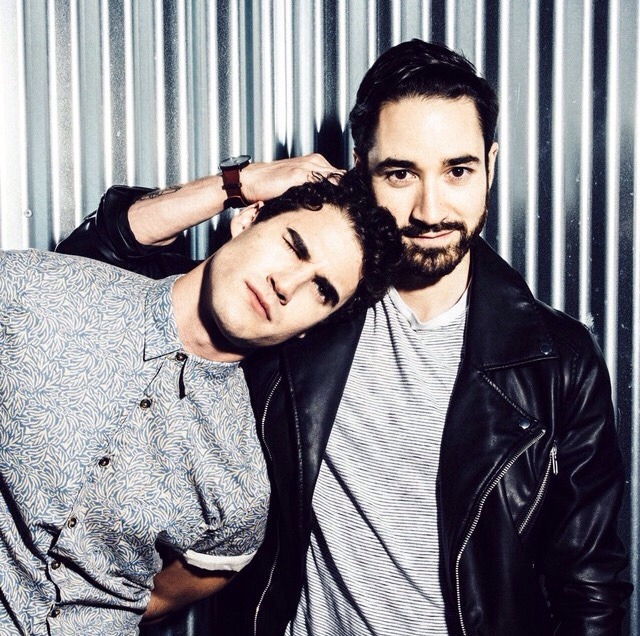 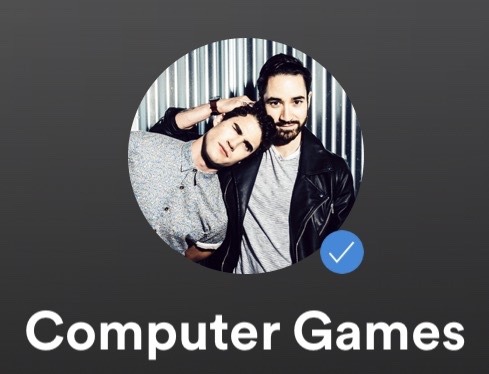 I like it too. For once, Chuck has a real haircut

Jeremy wrote:For once, Chuck has a real haircut

For folks who want to buy tickets to Computer Games' concert on June 4 at the Teragram Ballroom in Los Angeles, the PRE-SALE FOR FANS starts tomorrow, Tuesday, May 2 at 10 am PT to 10 pm PT.


But in order to get the code for the PRE-SALE FOR FANS, you need to sign up on Computer Games' email list today, by going to:    http://weplaycomputers.com 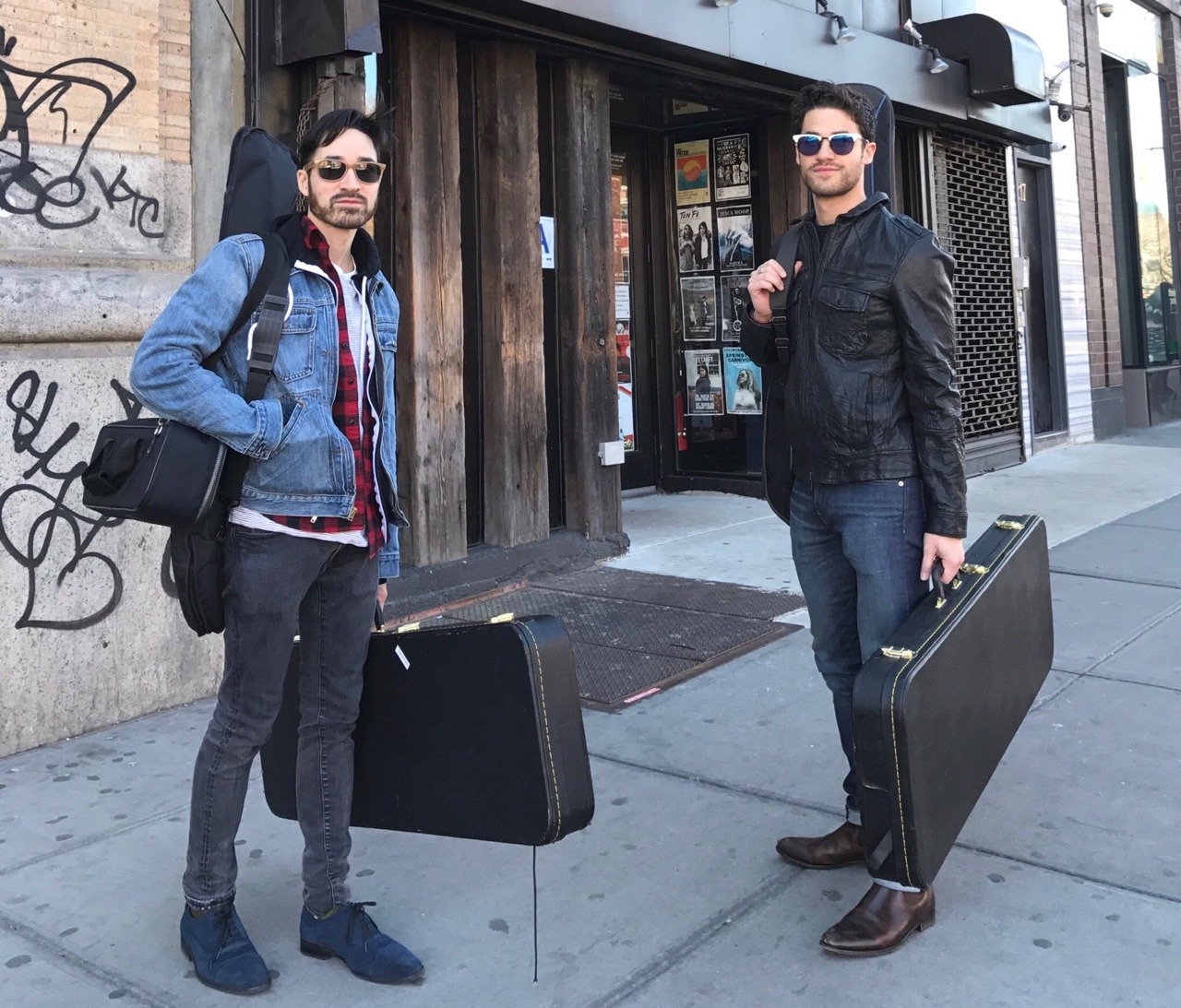 Weplaycomputers: Don’t miss out on our first LA show at @TeragramLA on June 4. Get early access for our pre-sale tomorrow. Sign up: weplaycomputers.co/LAShow 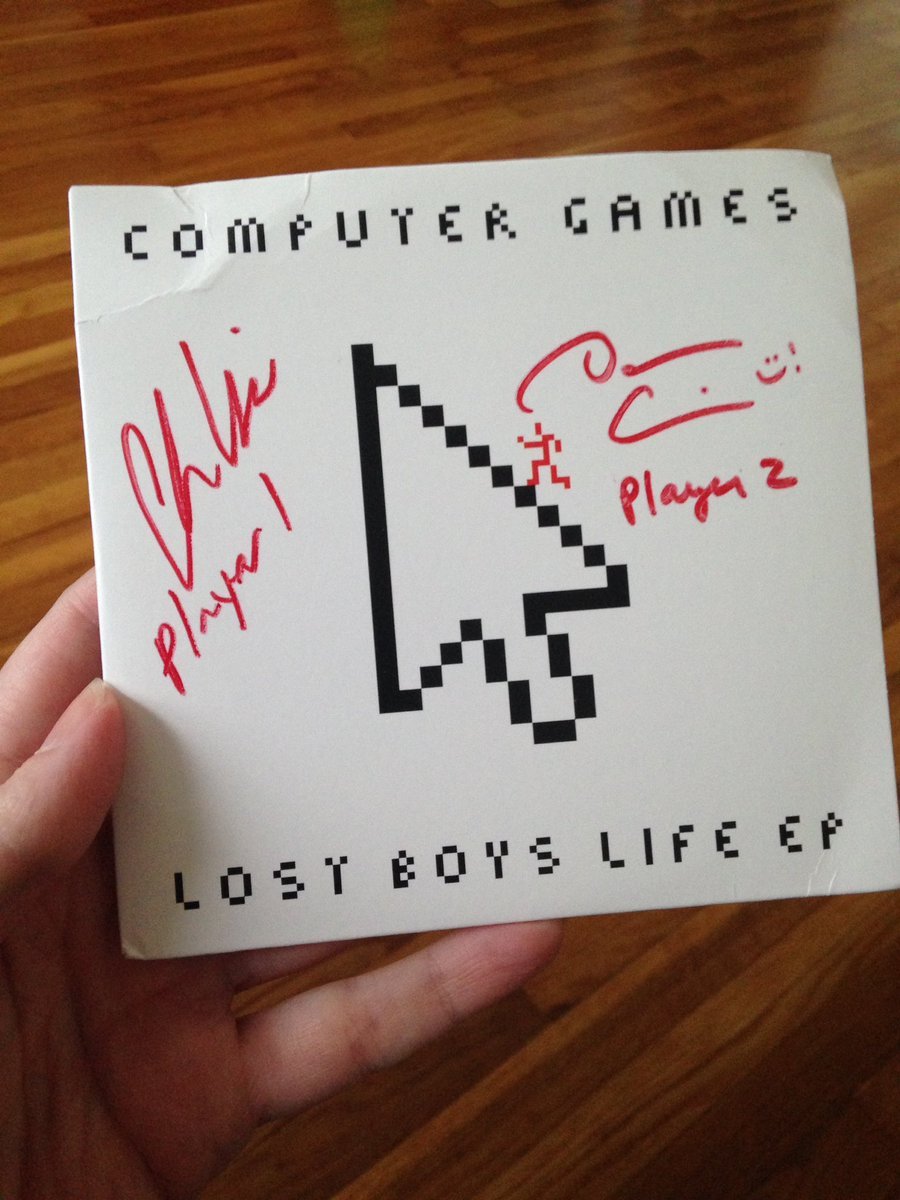 kriskubed:
OMG look what came in the mail today!! I am so excited!!!!

I'm happy to see that today's Fan Pre-sale for Computer Games' concert at the Teragram Ballroom in Los Angeles went so well!

Tomorrow, Wednesday, May 3, General Sale starts at 10 am PT for this concert. @weplaycomputers: Wow you guys are amazing! Our pre-sale is SOLD OUT. You’ll have another chance to grab tickets during our general on-sale tomorrow! Wow, Computer Games' June 4 concert at the Teragram Ballroom has sold out!   Happy to hear the fan response! 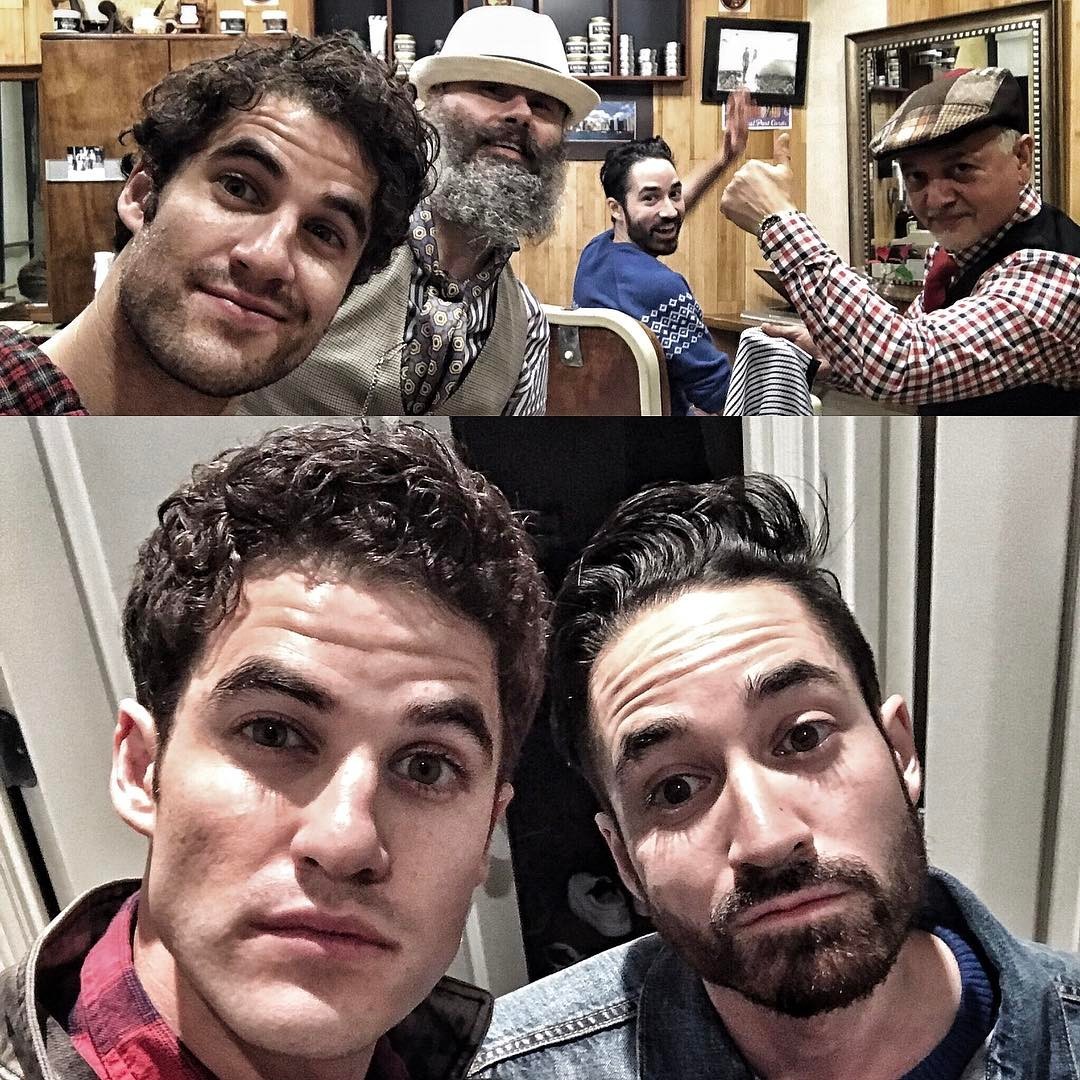 weplaycomputers If a shave & haircut you seek, look ye for two dudes with silly hats- for they shall transform you from No to Yo. 
Chuck's haircut looks the same as the one he has for their Spotify profile pic on April 29.  You can also find this pic on the fan site, Computer Games Street Team


I guess this is Computer Games' profile pic on Spotify.  I like it.

Aw, this is exciting.  "Every Single Night" was used as background music for one of the nominations at the MTV Movie and TV Awards!


Computer Games’ Every Single Night was featured at the MTV Movie Awards last night during the Best Duo nominations - May 7, 2017

Billboard wrote:
The 10 Best and Worst Moments at the 2017 MTV Movie and TV Awards

Here were ten of the the best and worst moments from the night that was.


Can we make this song a hit already? The Criss Bros. should be playing this song live at the VMAs in a few months.

I love how supportive Billboard is of Computer Games!  Thank you, Billboard!