Thanks for voting, Jeremy. 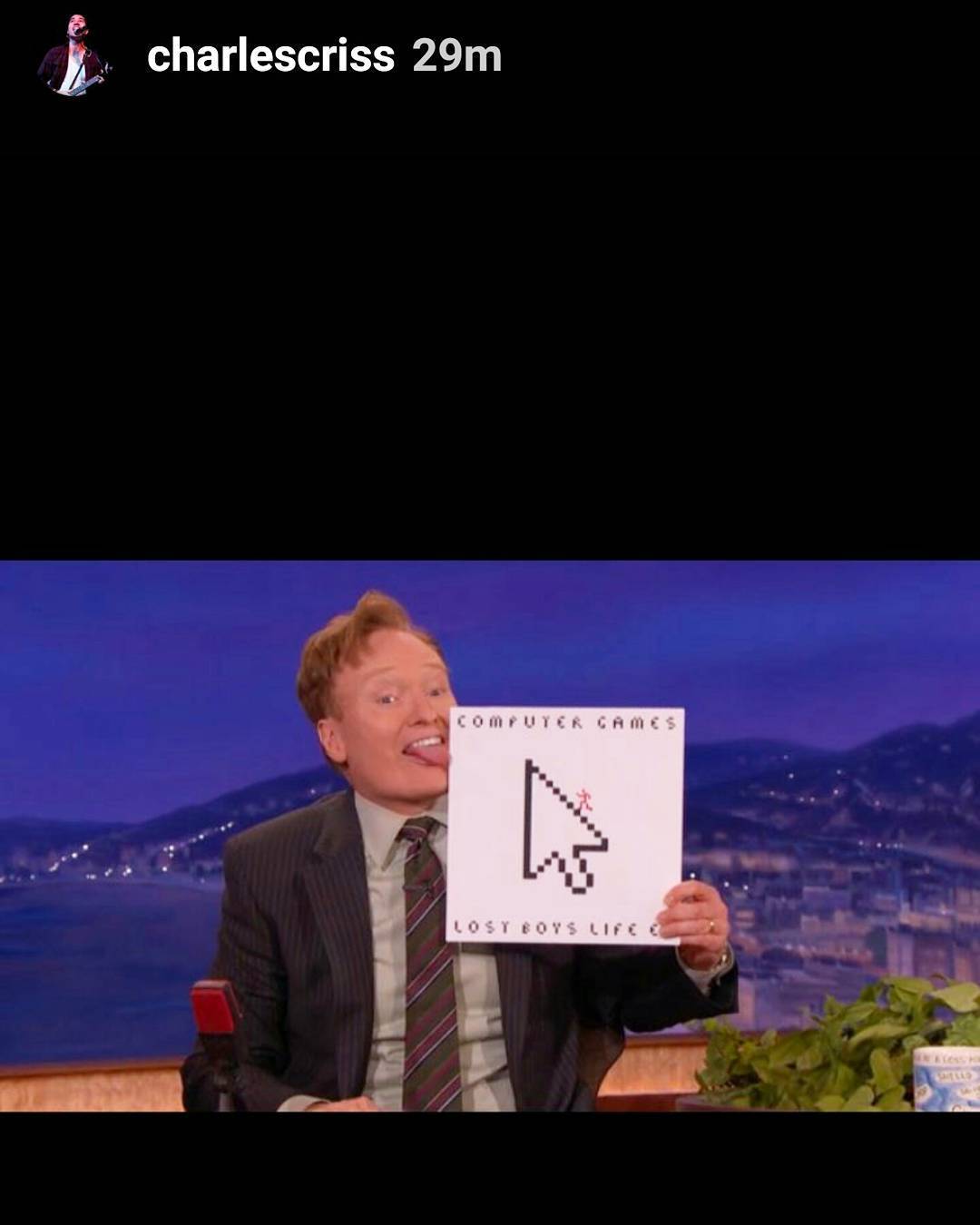 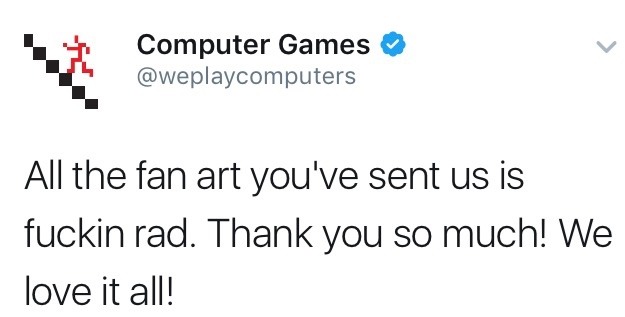 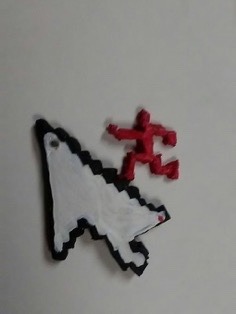 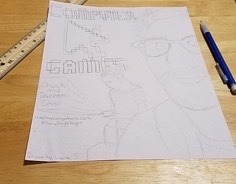 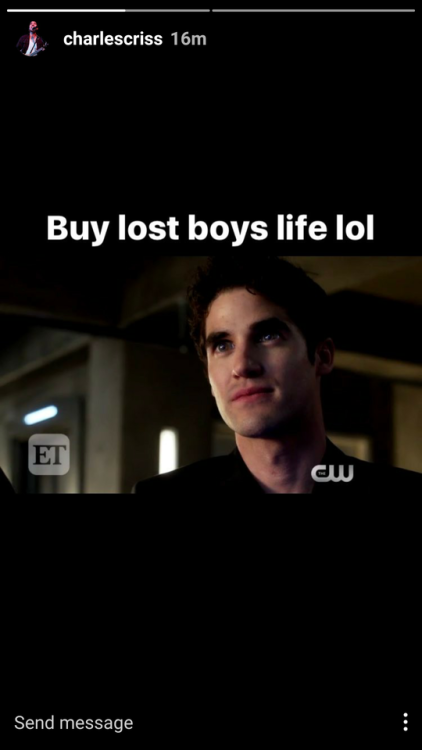 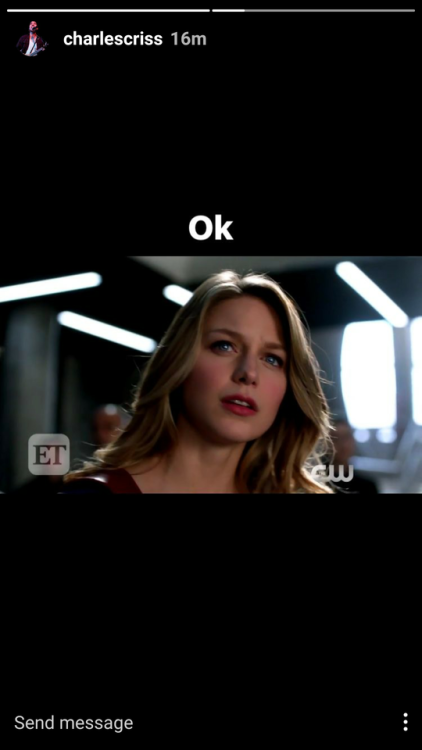 Darren has created 2 playlists on Spotify!

Video of the part of the interview on The Late Late Show with James Corden (March 21, 2017) that was about Computer Games.


# Repost   @weplaycomputers We’re extending our EXCLUSIVE merch bundle to March 31 to give everyone a chance! Remember this is the ONLY place you can get a physical copy of our EP. Link in bio. http://ift.tt/2nCFHMQ
via DarrenCrissArmy

Aw, this is nice of Reggie Watts (who plays on The Late Late Show with James Corden, and is a musician who Darren spoke highly about). 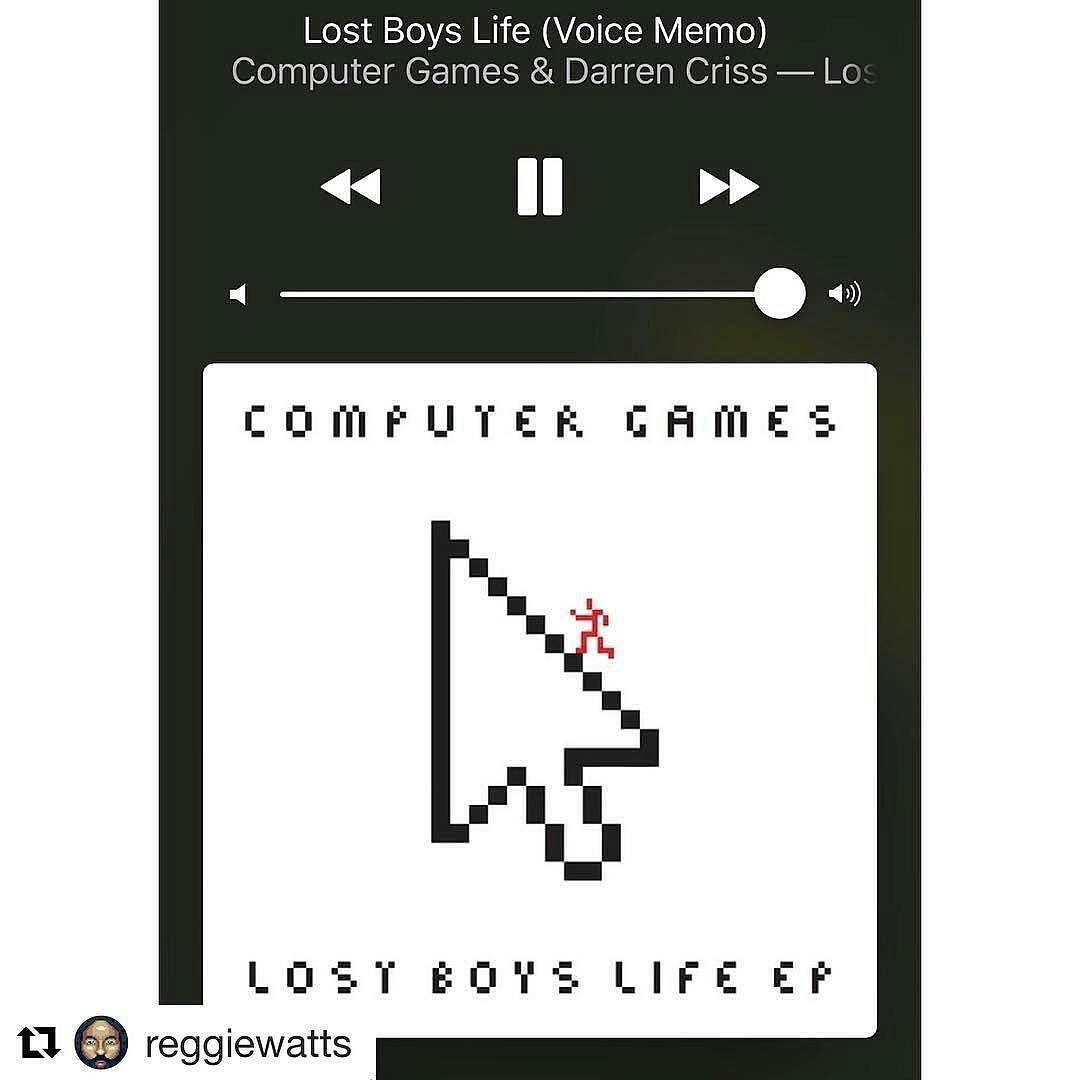 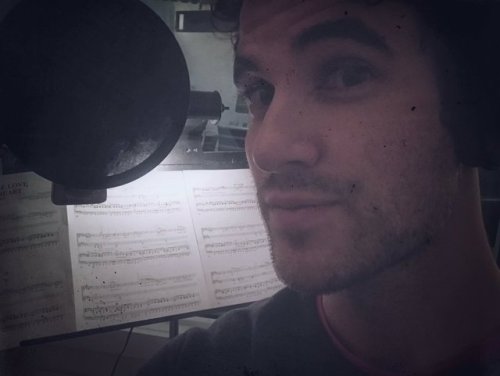 @weplaycomputers: Me recording my song for @CW_TheFlash in LA. About 15 hours later I finished my vocals for the Lost Boys Life EP in NY.


Wow.  I didn't know those two events happened so close together.

Remember when DaisiesAndLilies posted this (on March 4, 2017)?

DaisiesAndLilies wrote:
Aubrey (@imchrisdaily on Twitter) won one of these Google Hangouts. 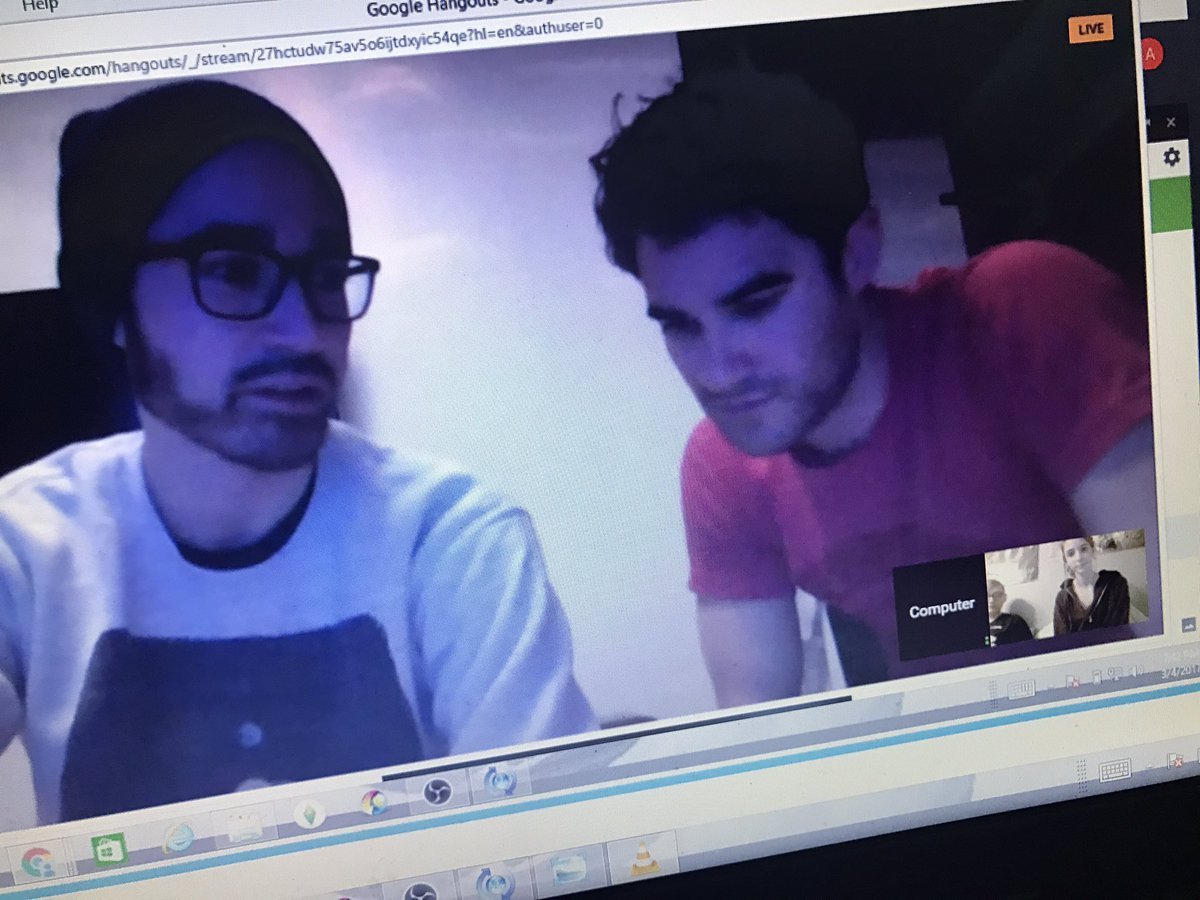 Soooo…. [see-no-evil monkey emoji] [goofy emoji] Thanks @DarrenCriss and @Chuck_Criss for talking to us! Made my entire life pretty much. @weplaycomputers

She added this, about why Darren hasn't done much music since the Listen Up tour: 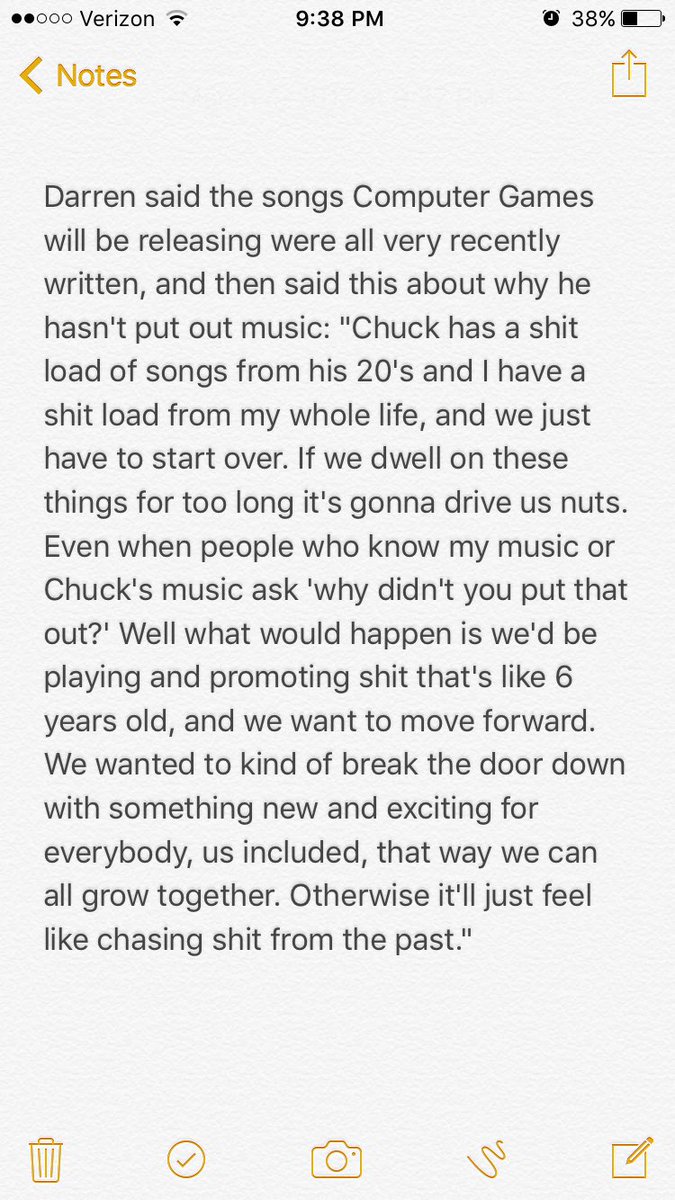 So yesterday we got the video of the Google Hangout with Aubrey and Darren and Chuck:


Here is the entire Google Hangout: 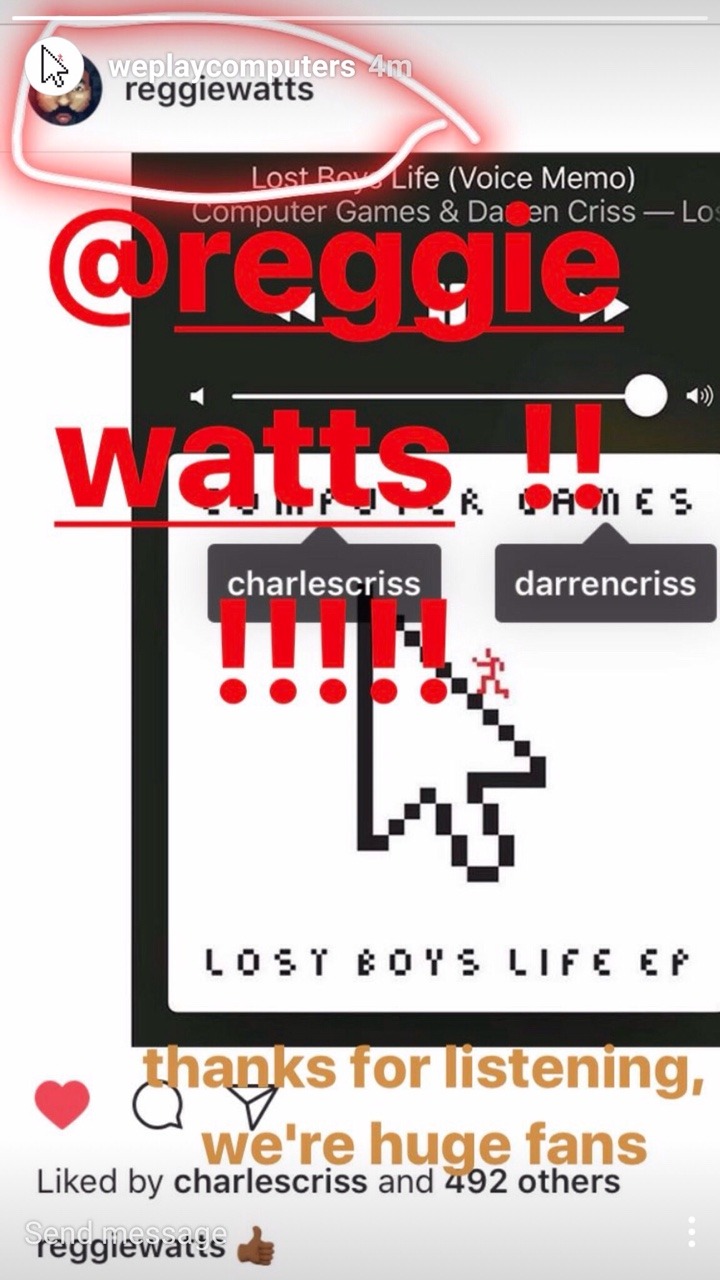 I meant to post this cute pic of Darren and Chuck with fans earlier.  I like how happy everyone is. 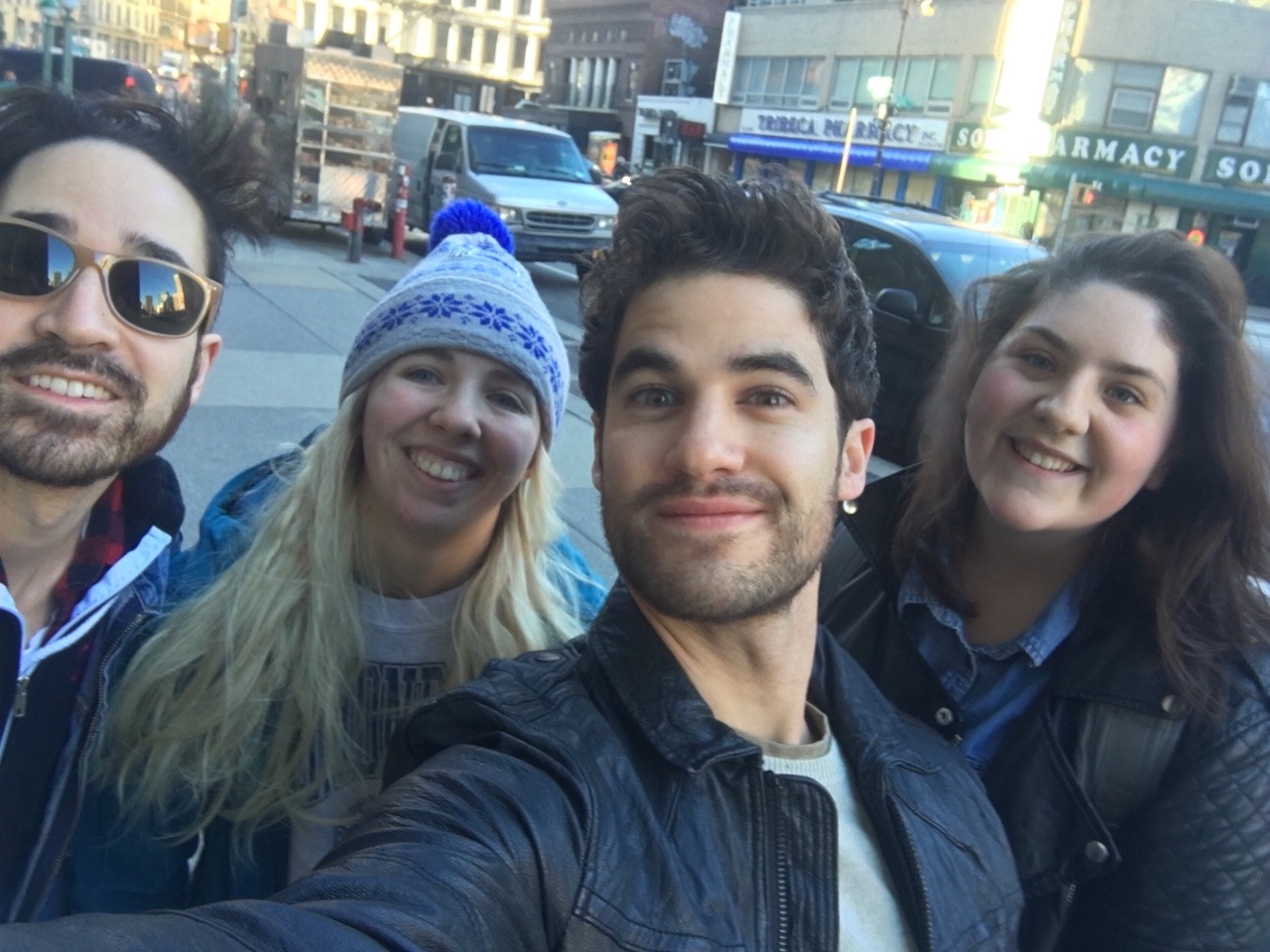 Can you give me a good reason I should live inside reality
I got my favorite life right here. 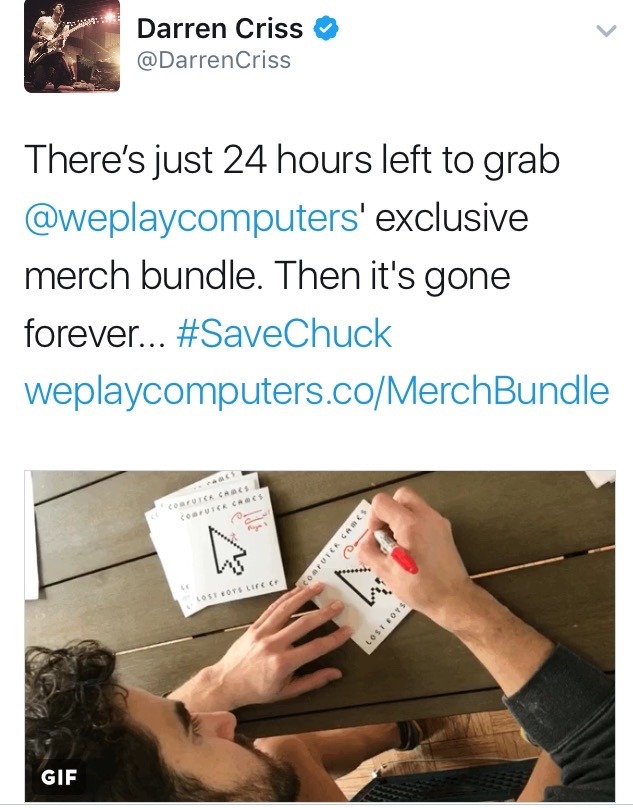 Their EP is called "Lost Boys Life" and Billboard is already predicting that its lead track "Every Single Night" will be one of the songs of the summer of 2017.

Growing up both musically inclined, the Fil-Am boys always planned to create music together. But as Darren went to do Hollywood projects and Chuck also became busy with his band Freelance Whales, the opportunity to do so didn't come up till now.

“We've always grown up playing music together and creating music together and that's sort of the backbone of our relationship. Unintentionally fell into these separate avenues that kind of kept us from doing this thing that we always meant to do. Now that the dust has settled a little bit with myself with things like 'Glee' and him with Freelance Whales, they've take a bit of a break, it seemed like the right time to fulfill our promise that we made to each other when we were teenagers,” Darren said.

“Chuck is an excellent doodler, he can make these paintings of ideas. Chuck has this free-form sense of creation whereas despite what people might think I'm a very relaxed, chill kind of guy but when it comes to the creative process, I'm very specific. So when Chuck has all these ideas that could be verse or chorus or lyric, I like going in and surgically putting it all together and finding the nose, the mouth and the face,” he said.

The singer-actor considers this project with his brother, which was produced independently, as a birthday present for himself.

“I turned 30 and there's this sense of okay, what do I have to prioritize in my life?” he said. 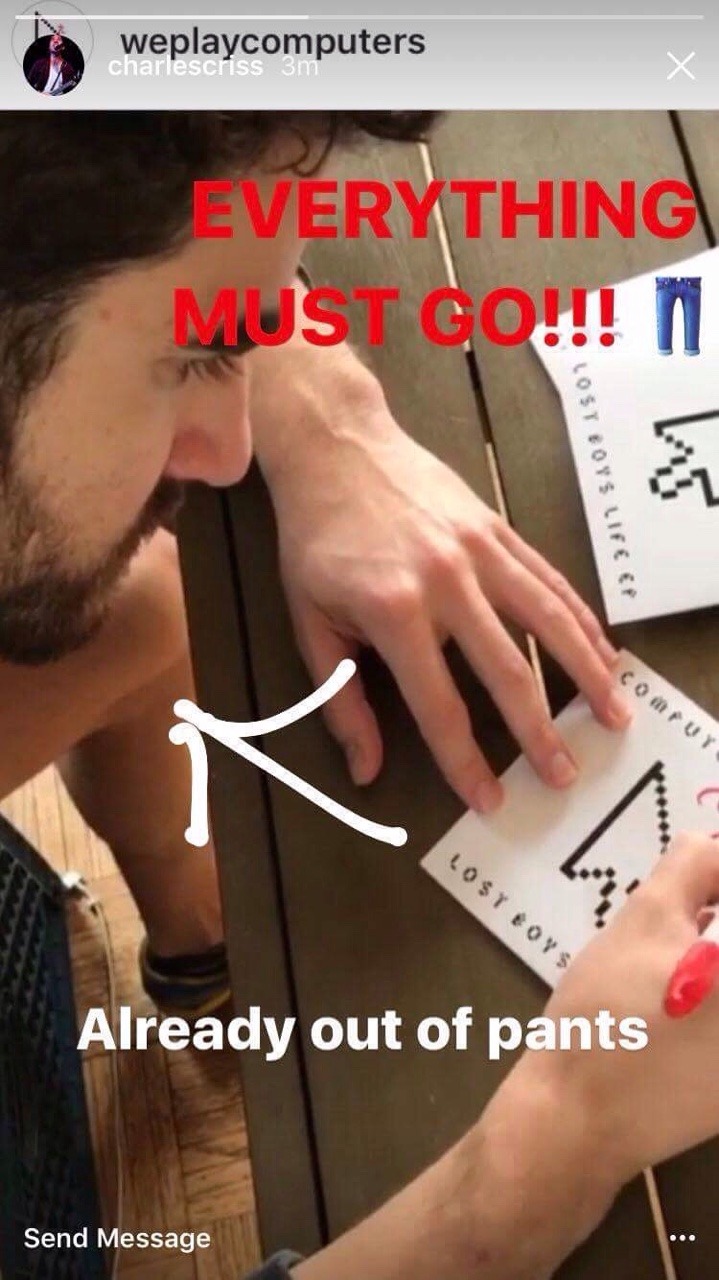 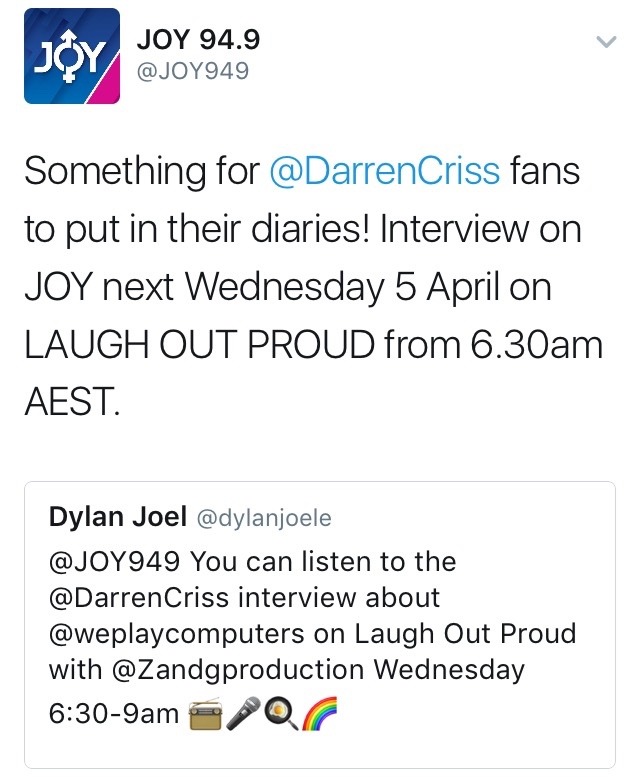 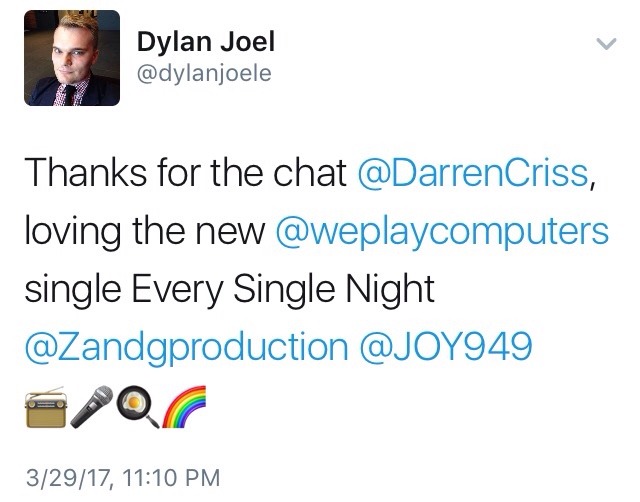 Computer Games has made a very good start in the charts. Is it still going well ?

In terms of the iTunes charts, you can go here for a summary:  http://www.itunescharts.net/us/artists/music/computer-games-darren-criss/albums/lost-boys-life-ep/

I am happy that Darren and Chuck's first EP did so well.

Darren Criss is one of those annoyingly talented people with plenty of options.

He also wrote songs for Glee, including the Emmy-nominated This Time which featured in the show’s finale.

But, as a solo artist, he hasn’t always been happy with the music he’s made.

“The past several years I just felt so weird and uncomfortable with the stuff I was making. I didn’t feel right about it,” Criss told AAP.

“If I put it out I wondered if I could live with this forever. So I finally turned a corner and thought ‘I can just start over’.”

After years of sharing songs via email with his brother Chuck, a member of indie rock band Freelance Whales, Criss thought maybe it was time they finally teamed up and made music together.

“It dawned on me that we kind of owe this dream to ourselves, that we’d been sort of holding off, like to our teenage selves,” he said.

The Criss brothers got together to release an EP under their new group name Computer Games.

“The name, Computer Games, is a nostalgic concept because we played computer games as kids and the music that we make now is quite literally a computer game,” he said.

“It’s this playful thing we’ve been working on, on computers, but it also sounds like something we did around the time that those records would have been popular - the Peter Gabriel and Miami Sound Machine, late 80-s early 90s dance records.”

I'm so happy for Darren and Chuck that they got to realize their musical partnership by releasing their Lost Boys Life EP.   In terms of prior music that Darren was working on (pre-Lost Boys Life), I'm happy that Darren decided to assess whether he could live with his name being linked to an album that he was not proud of, and that he decided against it.  He stayed true to his principles; he stayed true to how he defined himself as an artist.

Pauli - You've joined forces with your big brother, Chuck to form the band "Computer Games" and have released an EP "Lost Boys Life."  How did you come up with that title?

Darren: For the band or the title track?

I was thinking title track, but you can give us an answer to both if you like!

Well “Computer Games” started because Chuck and I have been playing together our entire lives, since we were teenagers & it was always a dream to do some sort of group together, . . .  and throughout the years I had been writing stuff and sending to Chuck and Chuck would write things and send them to me and it got to a point a couple of years ago where I was trying to figure out what sort of music I wanted to put out there and Chuck and I had a few songs together and it just seemed to work. I said to him, look man, this isn’t just you or just me, it’s the two of us and we’ve always wanted to do something together so why don’t we just make this the project, so here we are a couple of years later and we came up with the name “Computer Games” because it has a lot of relevance to us nostalgically, we grew up playing computer games, more than video games and as we got older, Oregan Trail & Sim City slowly turned into electronic music programming, so the music we’ve made for this project is literally a result of our computer games, so there you have a fun name that’s nostalgic and it has a double meaning with how we sort of communicate with each other now, you know Facebook, social media… we all play computer games these days.

I know you performed the lead single "Every Single Night" at iheart radio, will you be performing the songs live alongside Chuck?

Yeah, we’ve done a few shows already. This is a very small operation, you know it’s only a small humble EP, there’s only three songs. We have a bunch of other songs that we’ve been working on that I think and hope are the best yet to come, but for this first initial flash, we wanted to just give out a little taste of what we are and see what the reaction is and go from there. So whether it’s a tour or another record, we’re just testing the waters to see how people will react and we’ll go from there.

Mate you're a true triple threat.  You sing, you dance and you act.  Do you have a preference of which one you enjoy more?

They’re all the same to me. It’s all story-telling, it’s all connecting dots between yourself and another person. It’s getting people to come together and be a part of something bigger than themselves and that’s all it is for me. Whether it’s telling a story on stage or being in a band or in a play or on television, it’s all a part of connecting human beings together.

Speaking of television, you've recently been cast in American Crime Story; Versace.  Have you started working on that yet?

No. I’m excited for that, but no, we haven’t started working on it just yet. I’m looking forward to it though.

This is so cute. 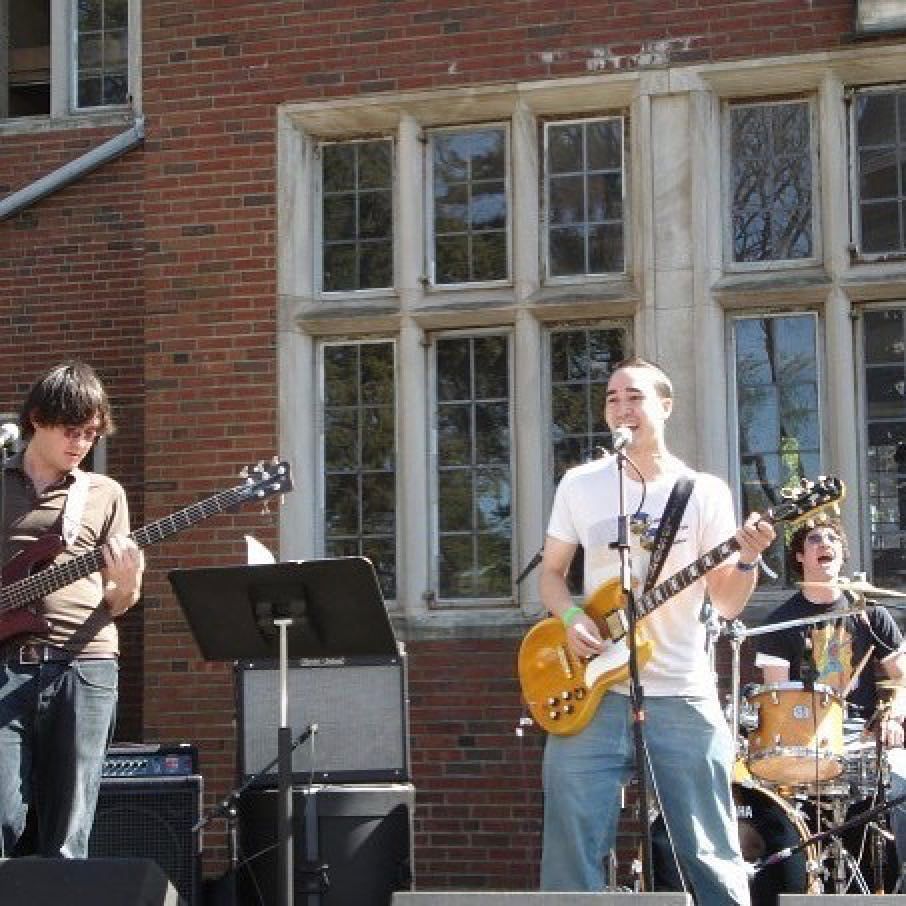 . . . Plenty of other great pop songs sneaked in under the radar. Here's a true "playlist" of ten of our favorites -- no April Fools, promise.

There'll be a built-in cult for Computer Games thanks to the involvement of Darren Criss and brother Chuck, but you don't have to have been a Gleenatic to get hooked on "Every Single Night." The song is pure mid-'80s pop punch, the kind that brought Steve Winwood a higher love, got Phil Collins to take off his jacket and still has Lionel Richie going all night long (all night) -- pretty impressively studied for a couple of guys who weren't even alive when The Breakfast Club came out.

Love how much Billboard is supportive of Darren and Chuck!

Here's your chance to win an autographed copy of Lost Boys Life EP! 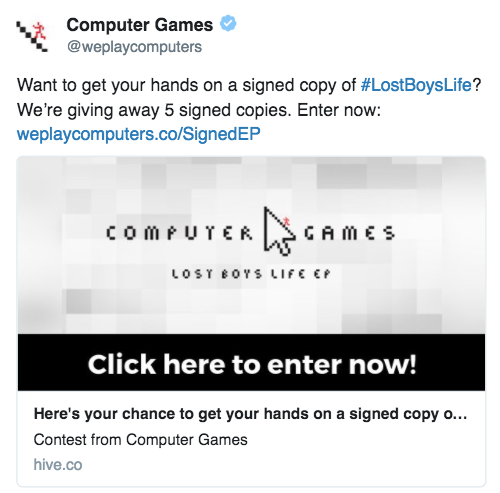 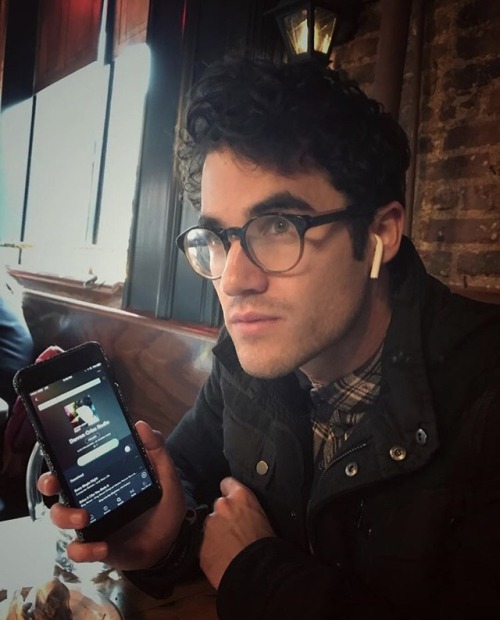 darrencriss: Got what I need. A cool playlist and cool earbuds that make me look less cool. With all of my spare time I decided to make y'all a lil playlist of some of the folks that inspire me… Press play on Spotify. (Link in bio)
April 3, 2017