Interview with Joy 94.9 about Computer Games: 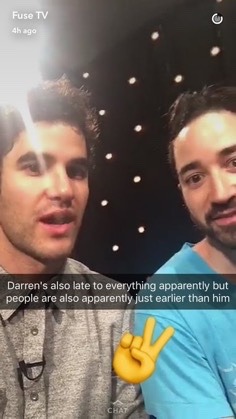 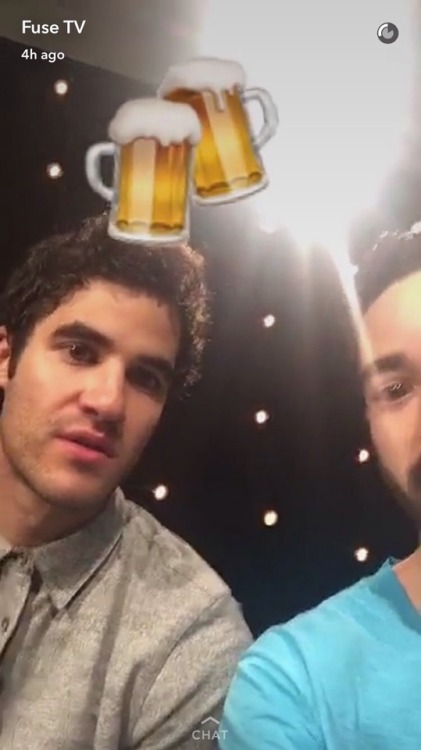 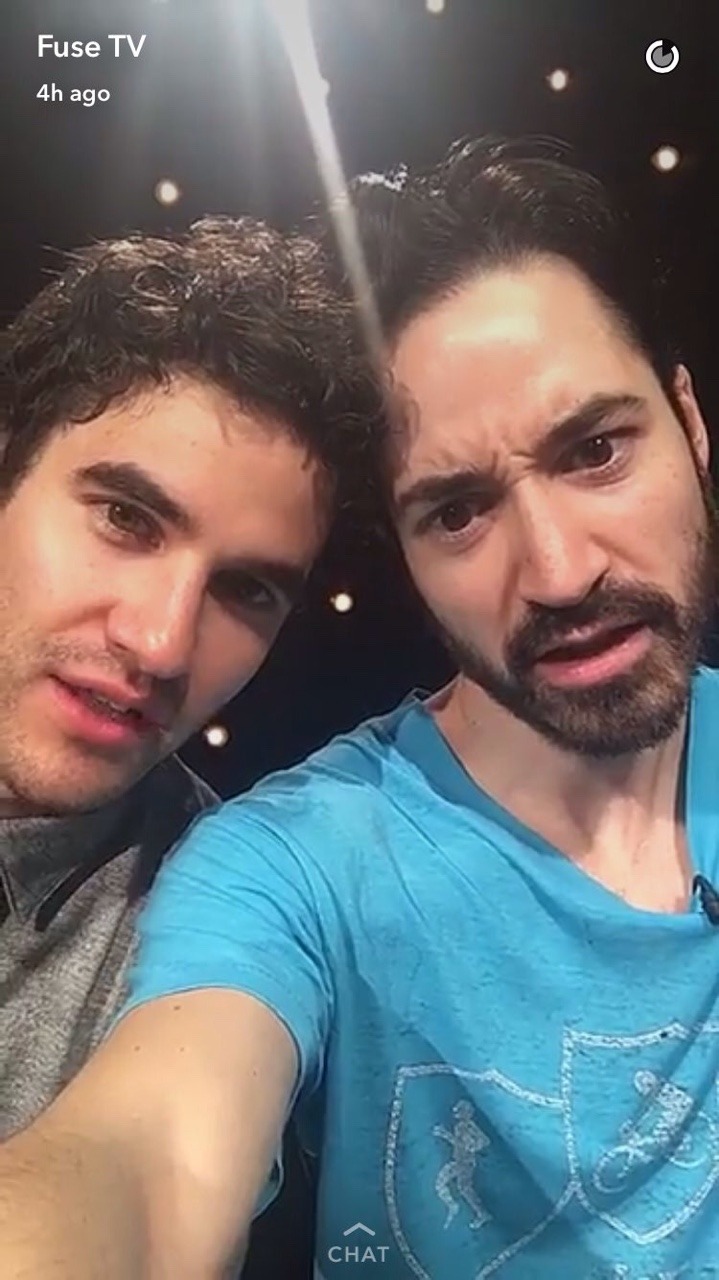 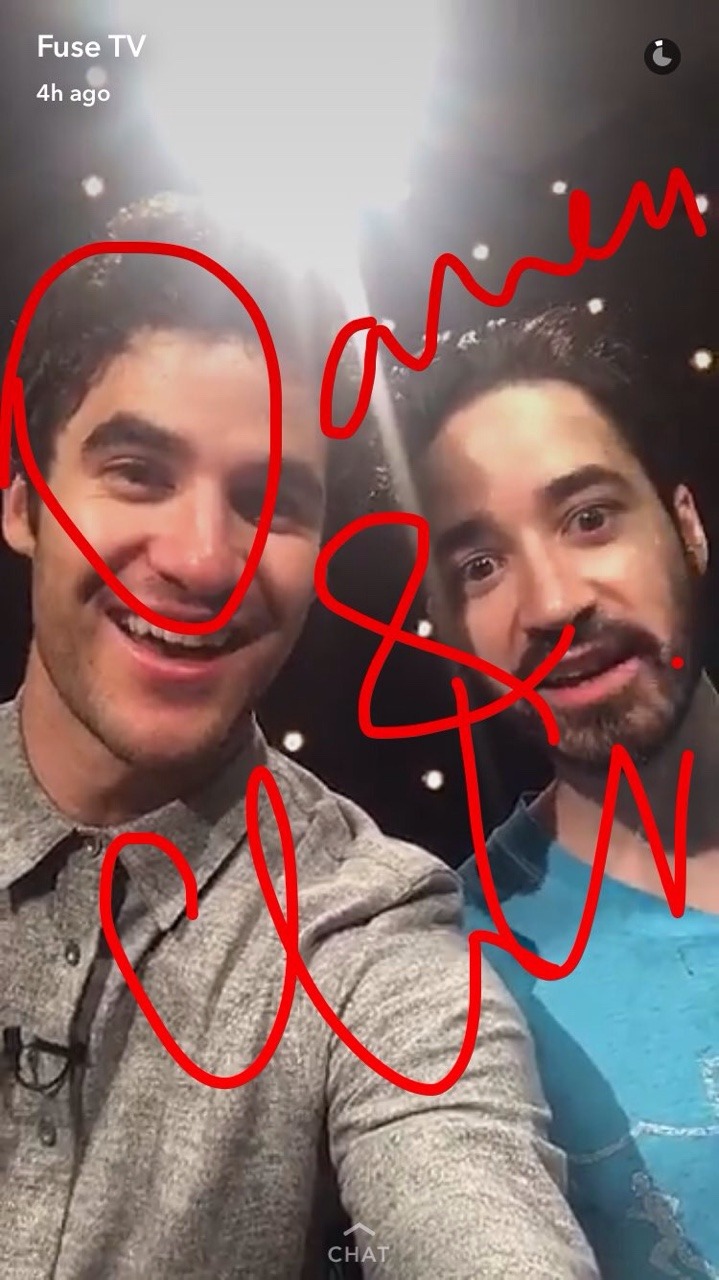 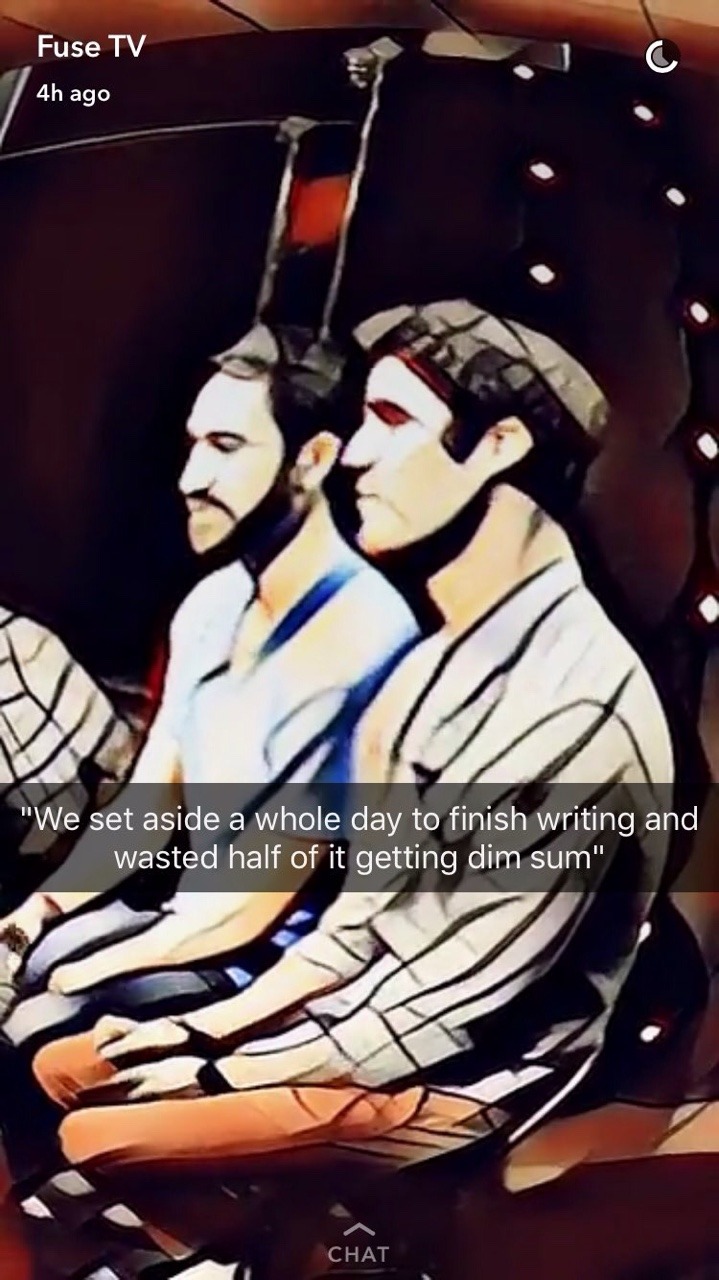 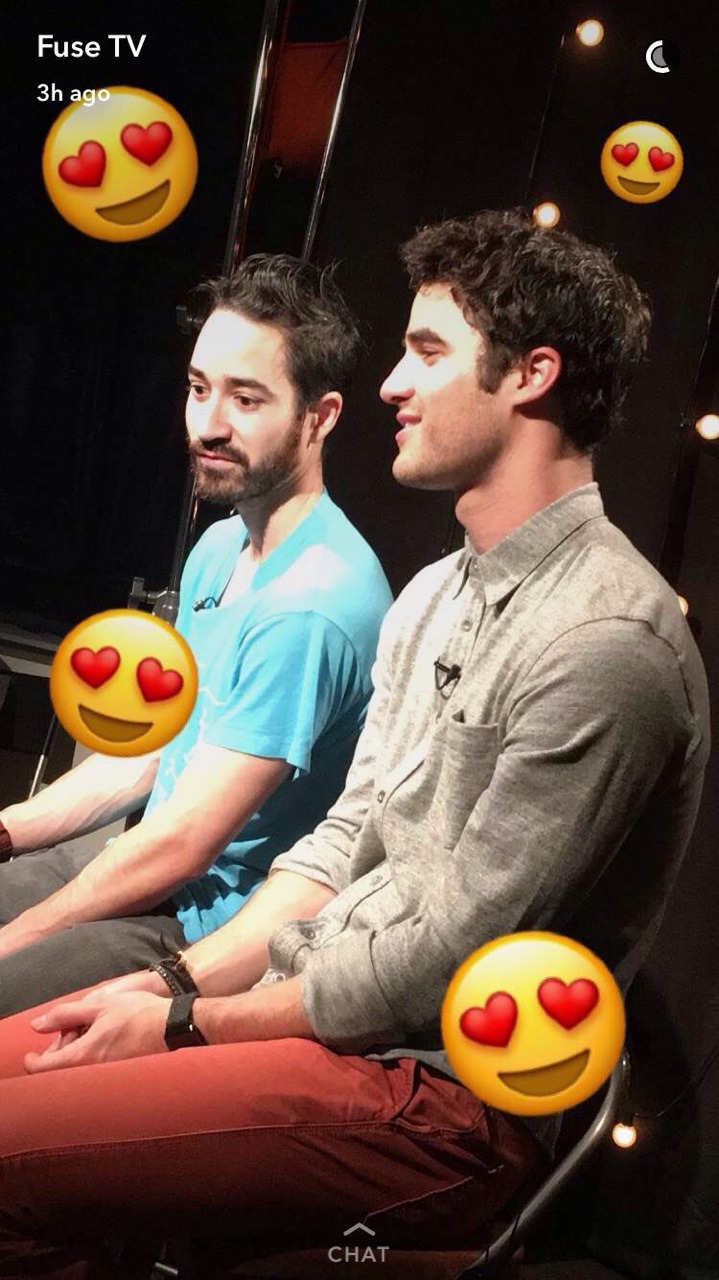 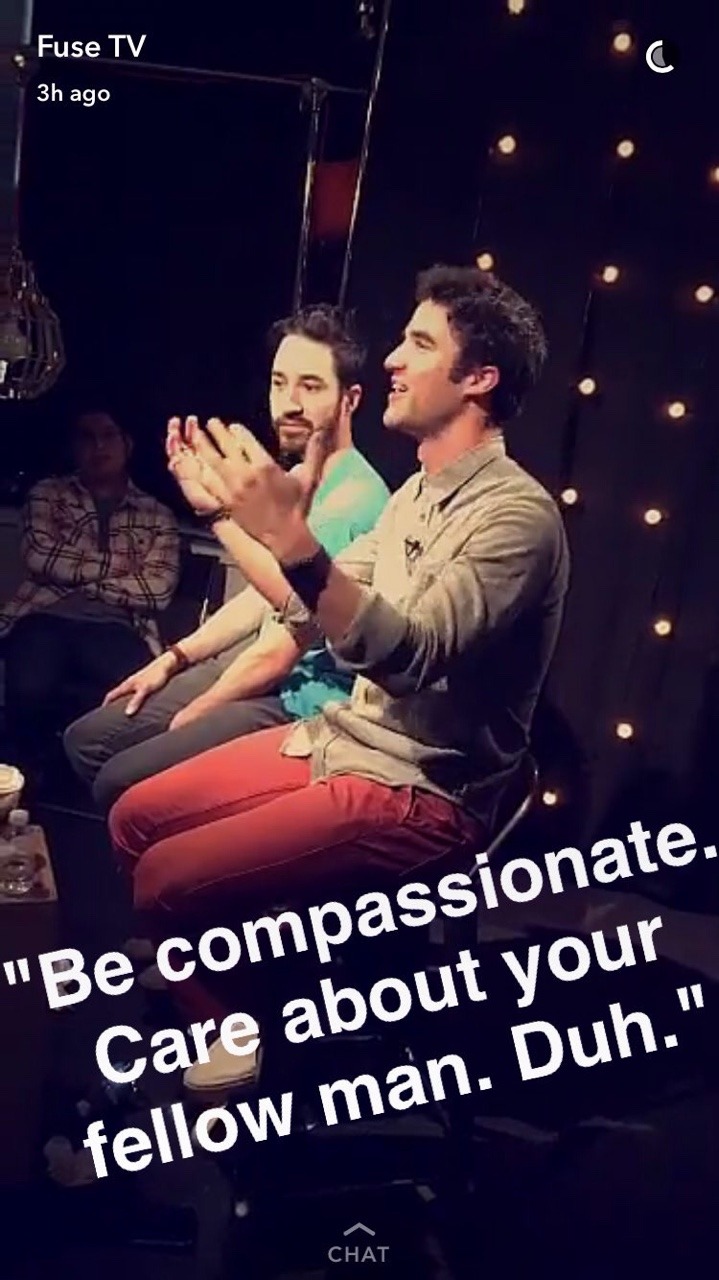 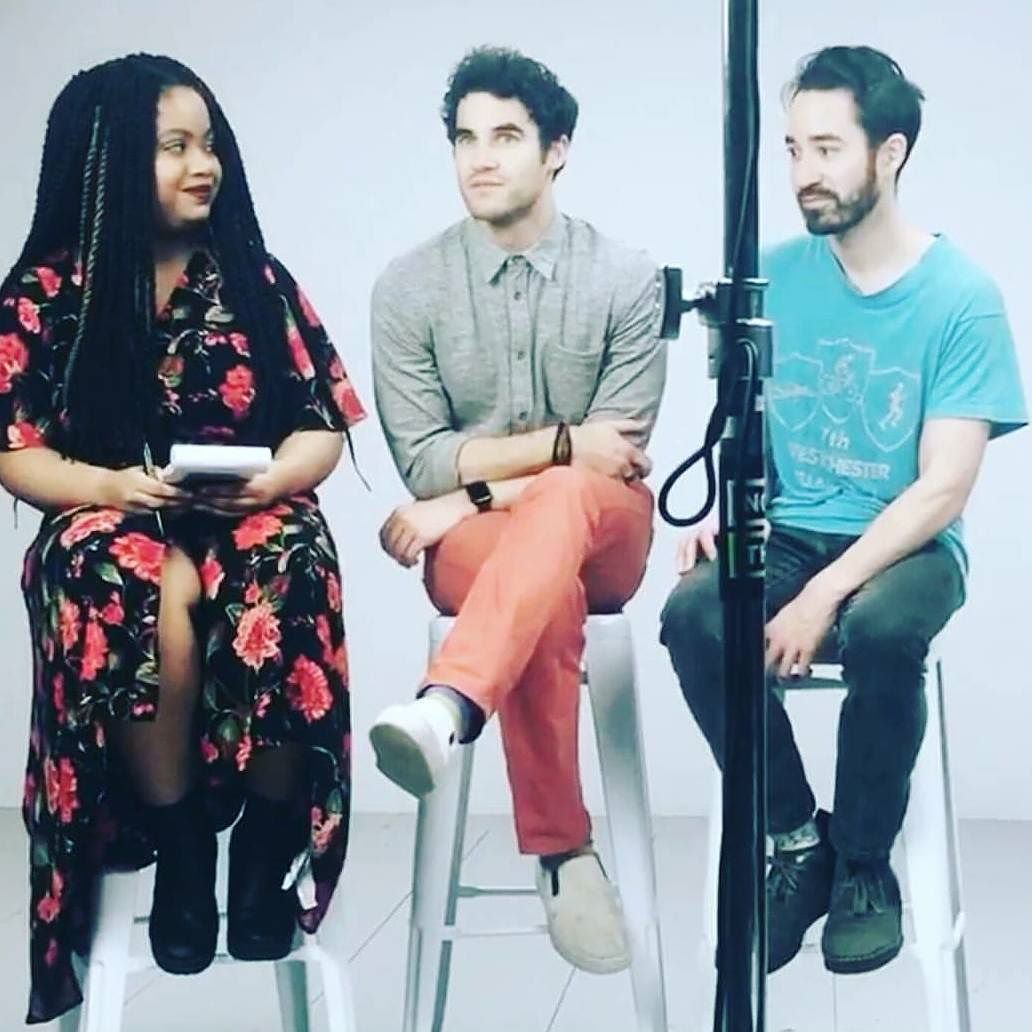 I'm glad that Computer Games thanked Billboard for their support:

Interview with Now This:

Fun interview.  It seems to me some times when Darren sings certain high notes, that he loses a bit of control/he sounds a bit strained.   Also, I personally love most when he sings a bit lower, because he sounds the most to me like Darren, because that is when the uniqueness of his voice, the warmth of his voice is most clear to me.   Just my own thoughts.

I love watching Chuck's facial expressions during the song performances.


The TV star and his brother tell us all about their "unapologetically" fun, '80s pop-inspired 'Lost Boys Life' EP, and what it's like working together as a music duo.

We all know Glee star Darren Criss is as musical as he is handsome, but did you know his brother Chuck is musically inclined, too? The talented brothers, who go by Computer Games as a pop duo, stopped by Fuse to tell us all about their new EP Lost Boys Life and how the group came to be . . .

"We grew up playing music together," Darren reveals. Explaining why they decided to put out the EP, Chuck jokes, "It's kind of a selfish thing. We did it for ourselves...and we're happy with whatever else comes from it." What can listeners expect? The guys say late '80s dance hits were an inspiration. "Relentlessly, unapologetically big and fun tracks," Darren says with a grin.

Above, watch the Criss boys (yeah, let's not use that one again) tell us the benefits of working together as brothers, not just bandmates.


Nice tumblr to visit if you need info about Computer Games! 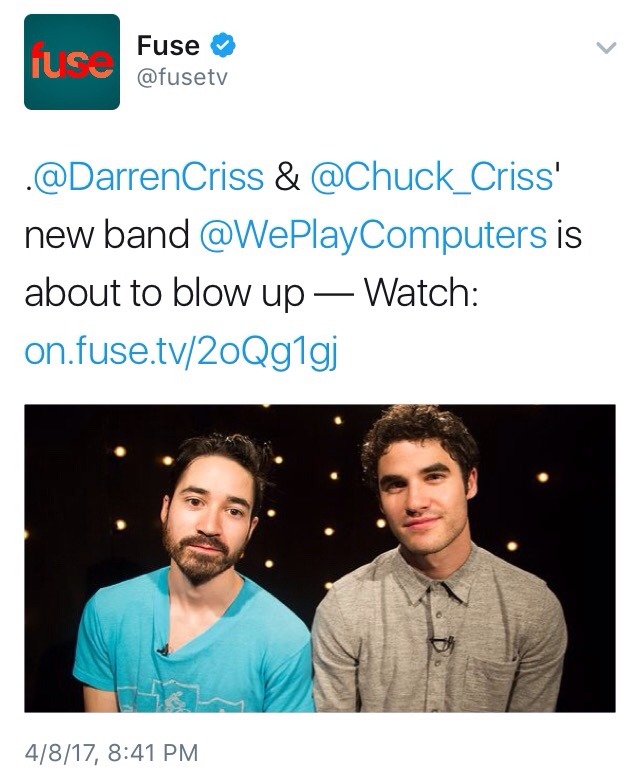 iHeartRadio released some Youtube videos of the Darren and Chuck's live session performances at the NYC office of iHeartRadio (which occurred on March 10, 2017). 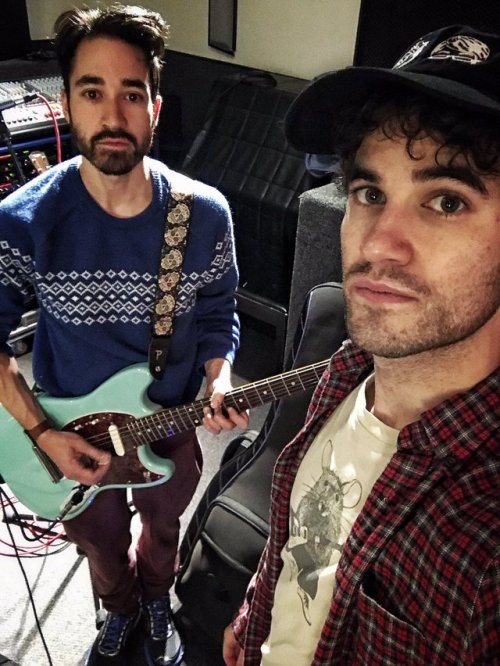 Darren is not the only funny brother.  "My last name's Jones . . . "   Chuck and Darren are fun to watch together.


This funny.  Chuck is funny (I'm assuming this was Chuck?). 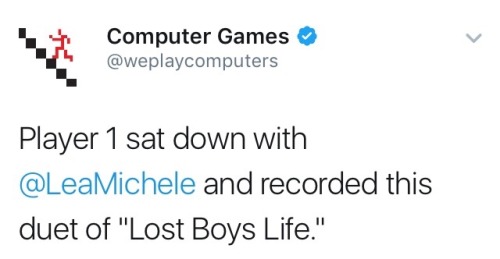 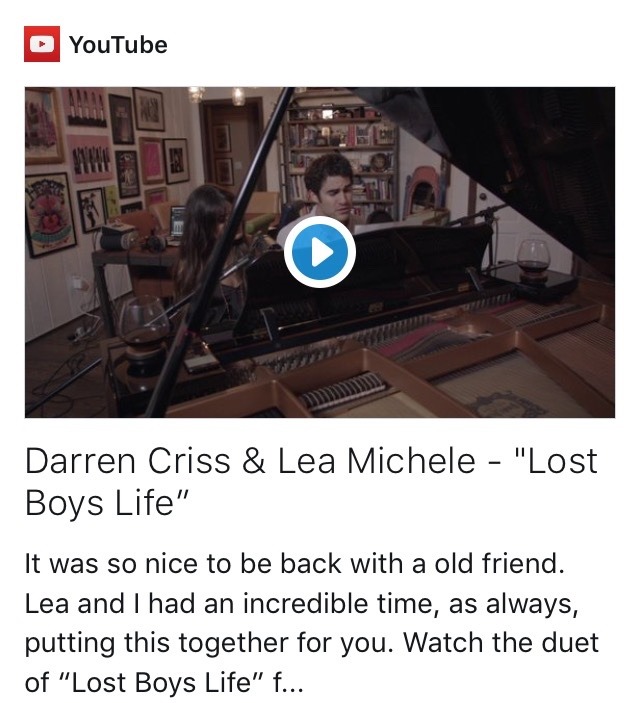 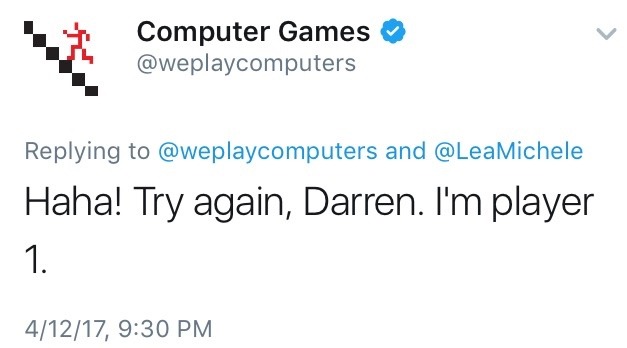 I forgot to say that several days ago, I got my Lost Boys Life EP in the mail, along with the t-shirt. 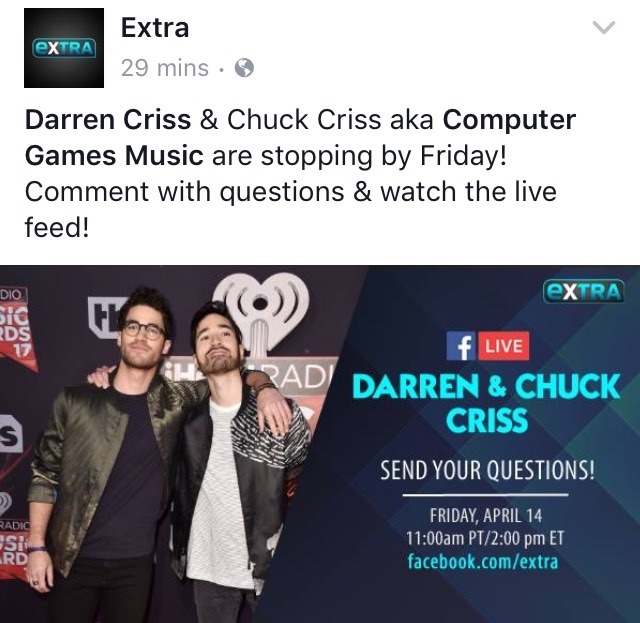 Is Darren shooting a music video for "Every Single Night"?


Darren and chuck talking to Extra (I like Chuck's Jacket): 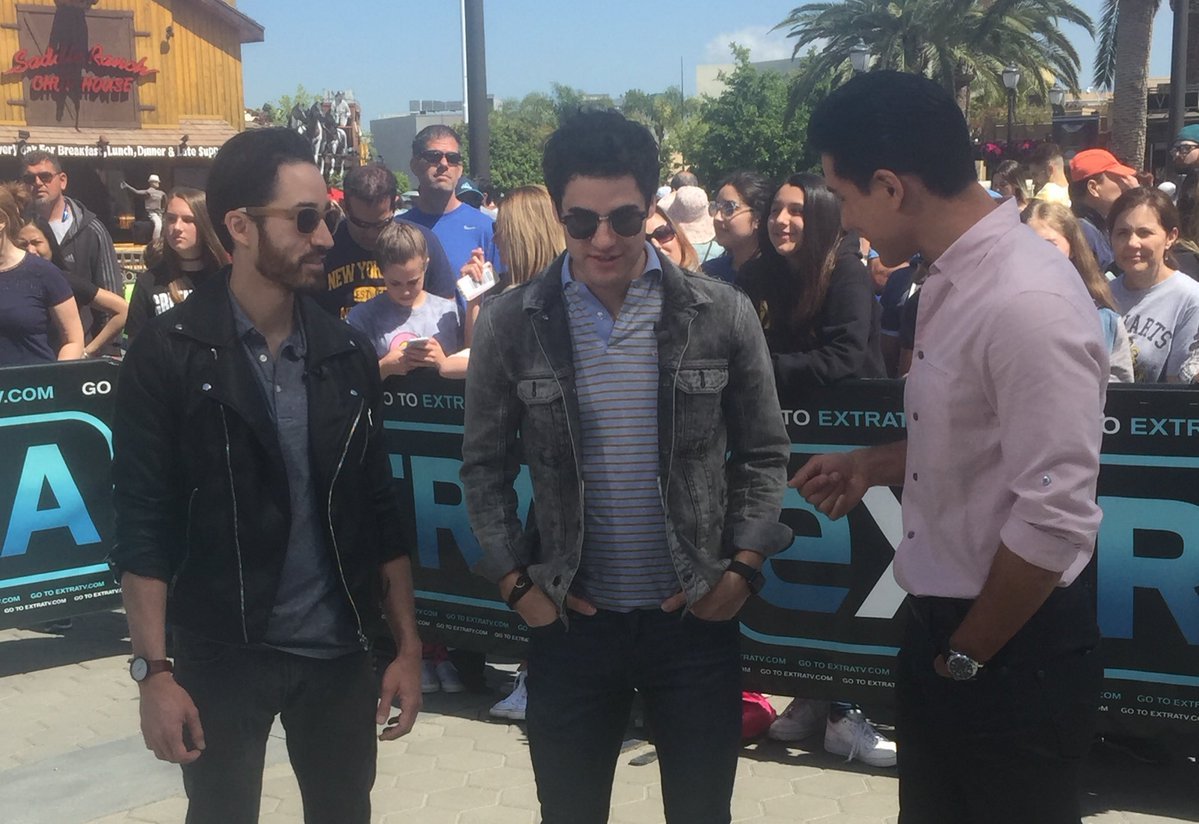 I can't play the Facebook video (audio?) for Extra, for some reason.

(title/lyric of a rap song according to my googling skills

/ gif source)
It's cute that Darren laughs at pretty much everything Chuck says.

I saw some pictures of her in silly costumes, so I think she's an extra in it like some of her friends and Darren's friends. Or maybe she dressed up for fun, or did both.

Thanks for the explanation of what Chuck said, Lin!  I'm a little under the weather, and my ears are congested (plus I have a fuzzy brain that comes with a cold ), but even if I did hear what Chuck said, I wouldn't have understood the rap context, so thank you for explaining!

Lin wrote:It's cute that Darren laughs at pretty much everything Chuck says.

It's very endearing.  It's a joy to watch how much fun they have together in each other's company. And I also thought it was sweet how supportive Darren showed he is of Chuck in this particular interview.   Also-I liked how Darren described his relationship with Mia in this interview--very cute!--as well as what he said about celebrity crushes.  He definitely values smart, ambitious, funny women.

I thought Darren did very well in this interview.  Fun and interesting interview.


Lin, thanks for the answer about Mia.  I saw those pics of her in that cute costume, was wondering if she is directing the video as well since she has experience in that (it would make sense to me).   Can't wait to see the music video of Every Single Night! 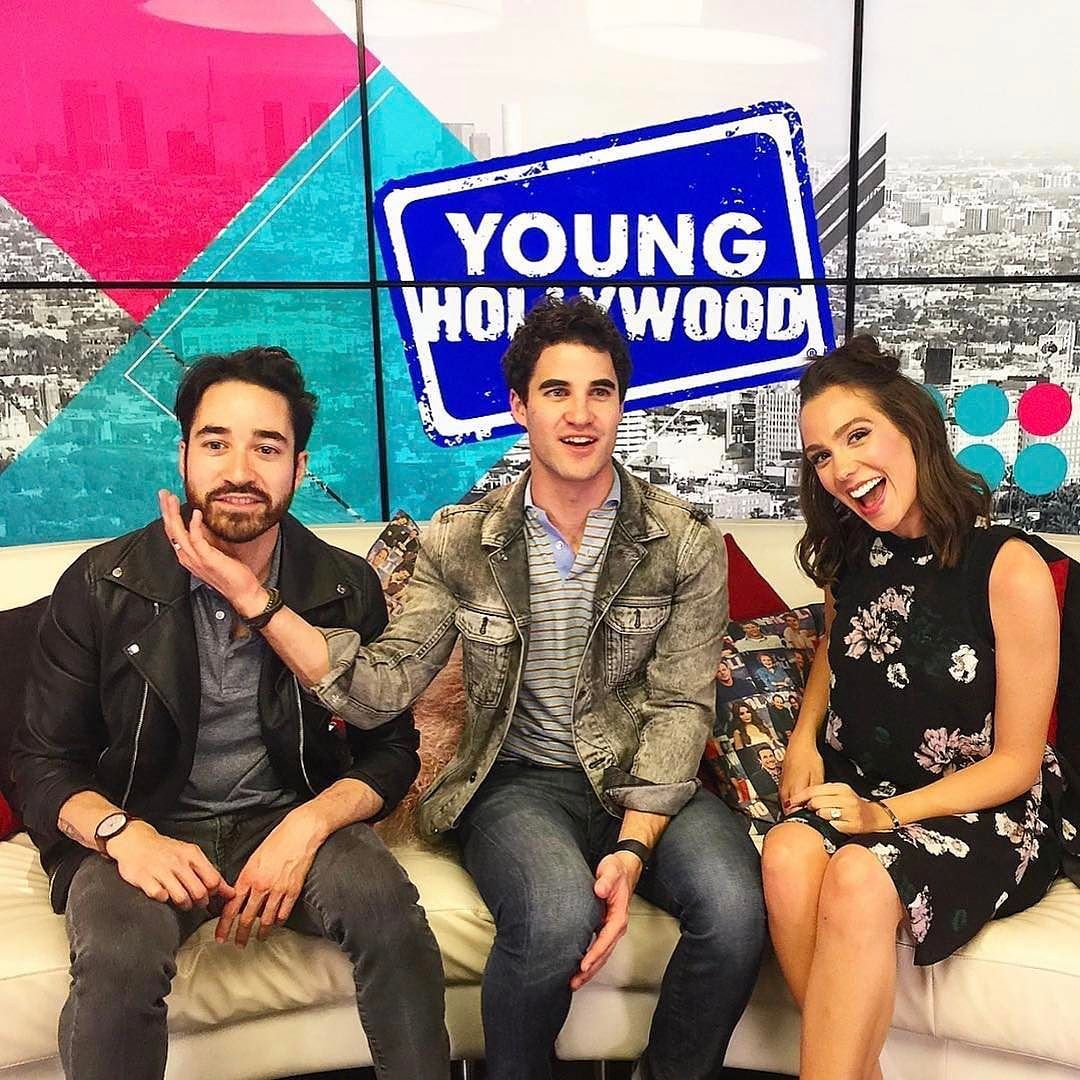 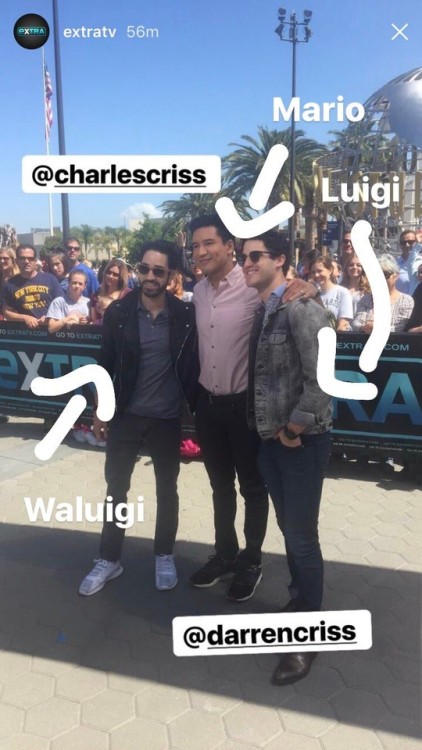 I forgot to post this yesterday.  It was Chuck's birthday yesterday!

Another video of the "Extra" interview, this time from dailydarrennews:

computergamesst:
via Young Hollywood on Musical.ly.

A few  more pics from that "Extra" interview with Mario Lopez: 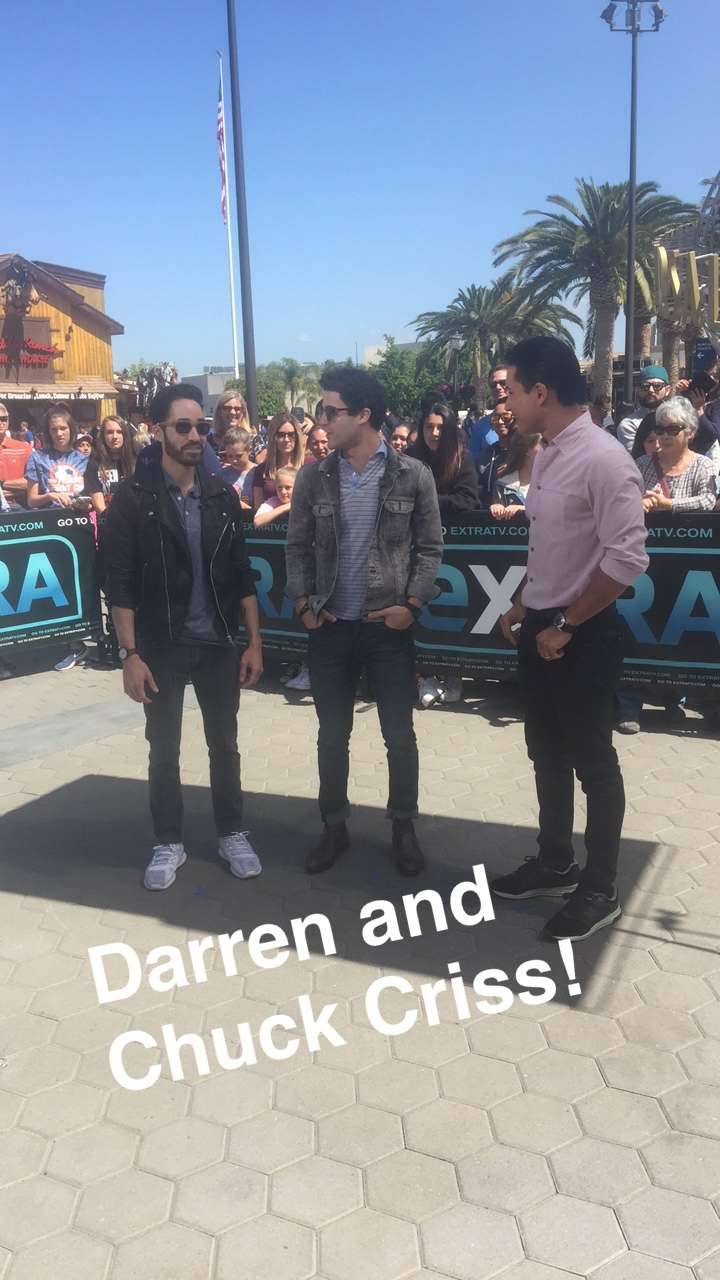 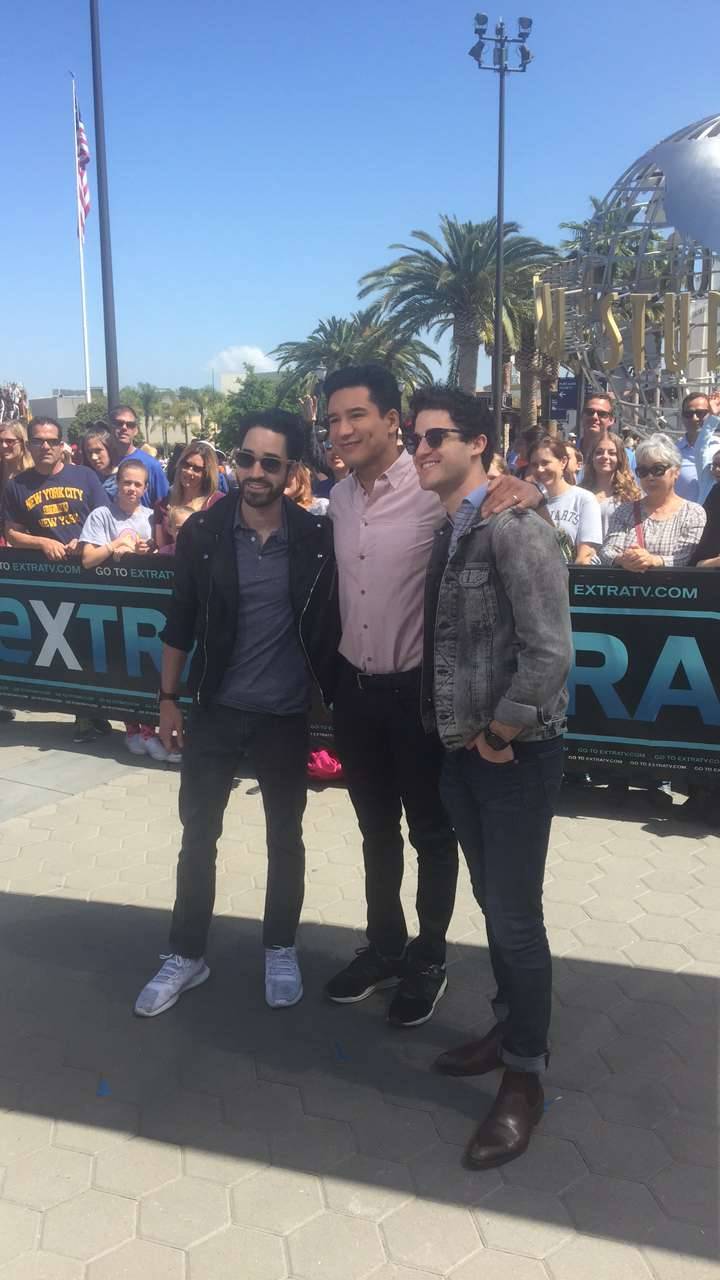 fallenjunkie:
Darren and Chuck at Extra Tv via their Snapchat (April 14th, 2017) 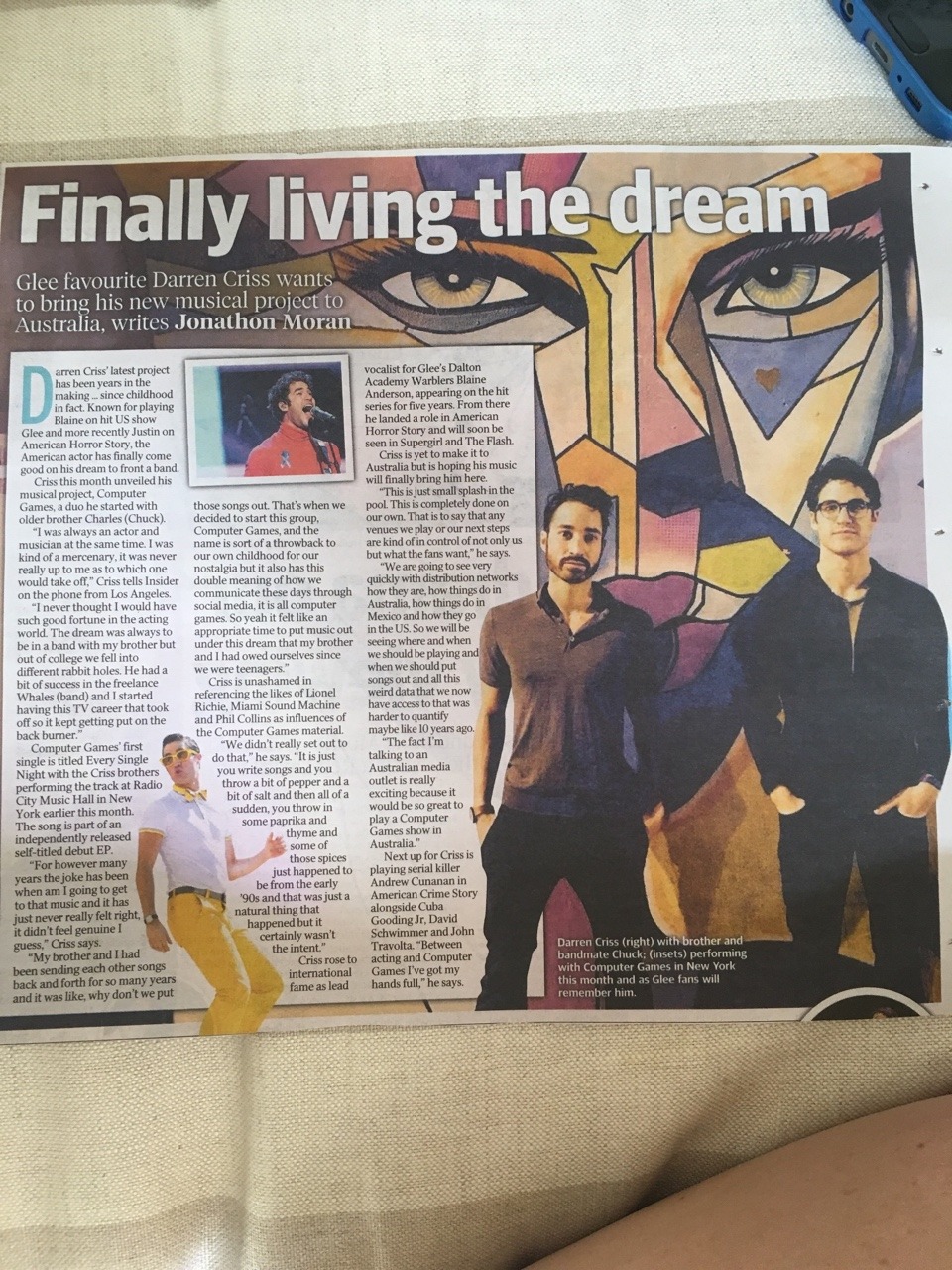 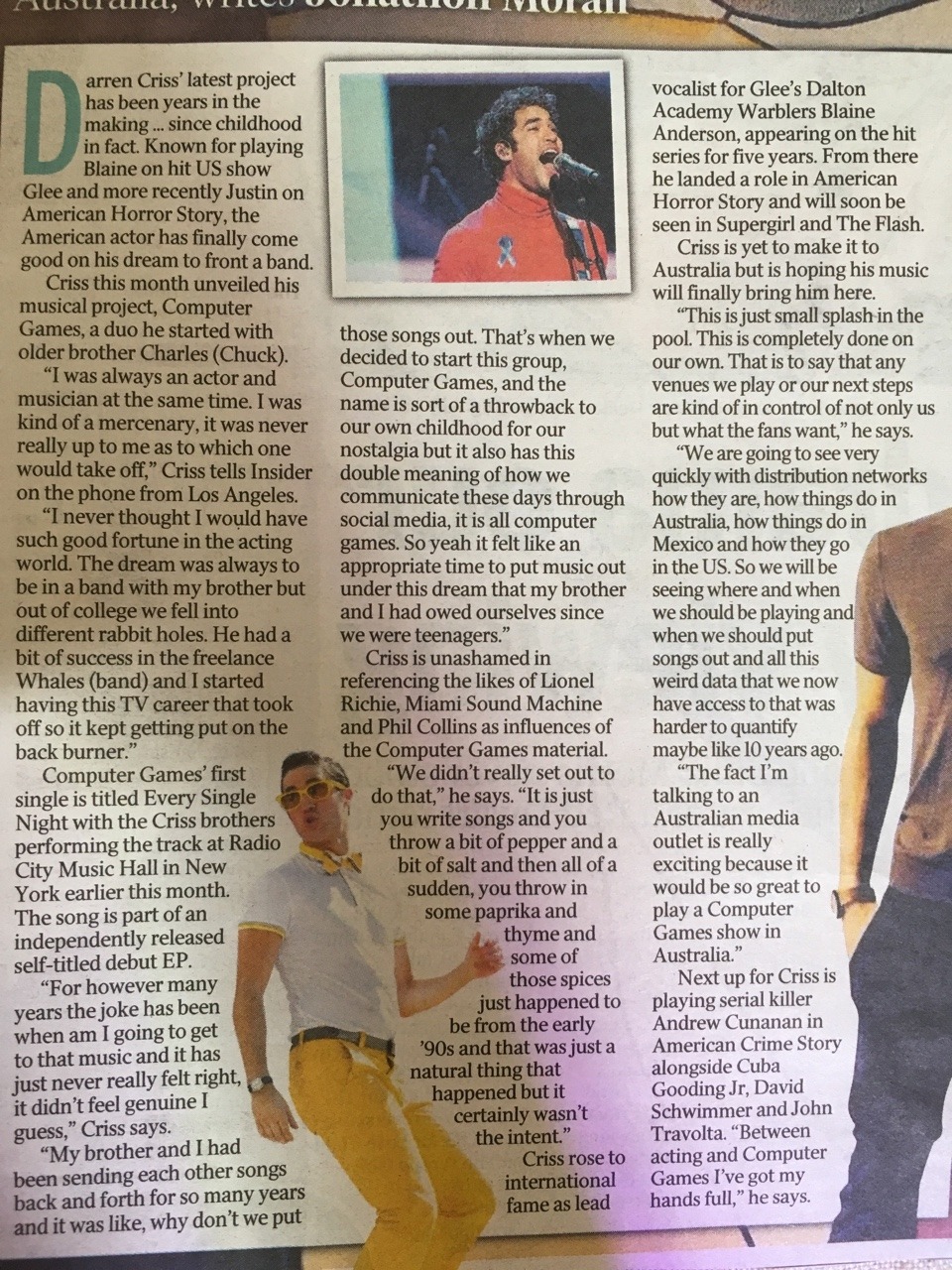 always-eternity-okay:
An article about Computer Games in the Sunday Telegraph (an Australian newspaper), April 16th 2017

And lol, about the clothes that Darren sometimes had to wear as Blaine.


mypatronusismalec:
yongchavez: Did a selfie-video (is that what it’s called? Educate me, millennials) with #DarrenCriss where he sends a message to kababayans and shares the most (half)-Filipino thing about him.

The Criss brothers having a blast. 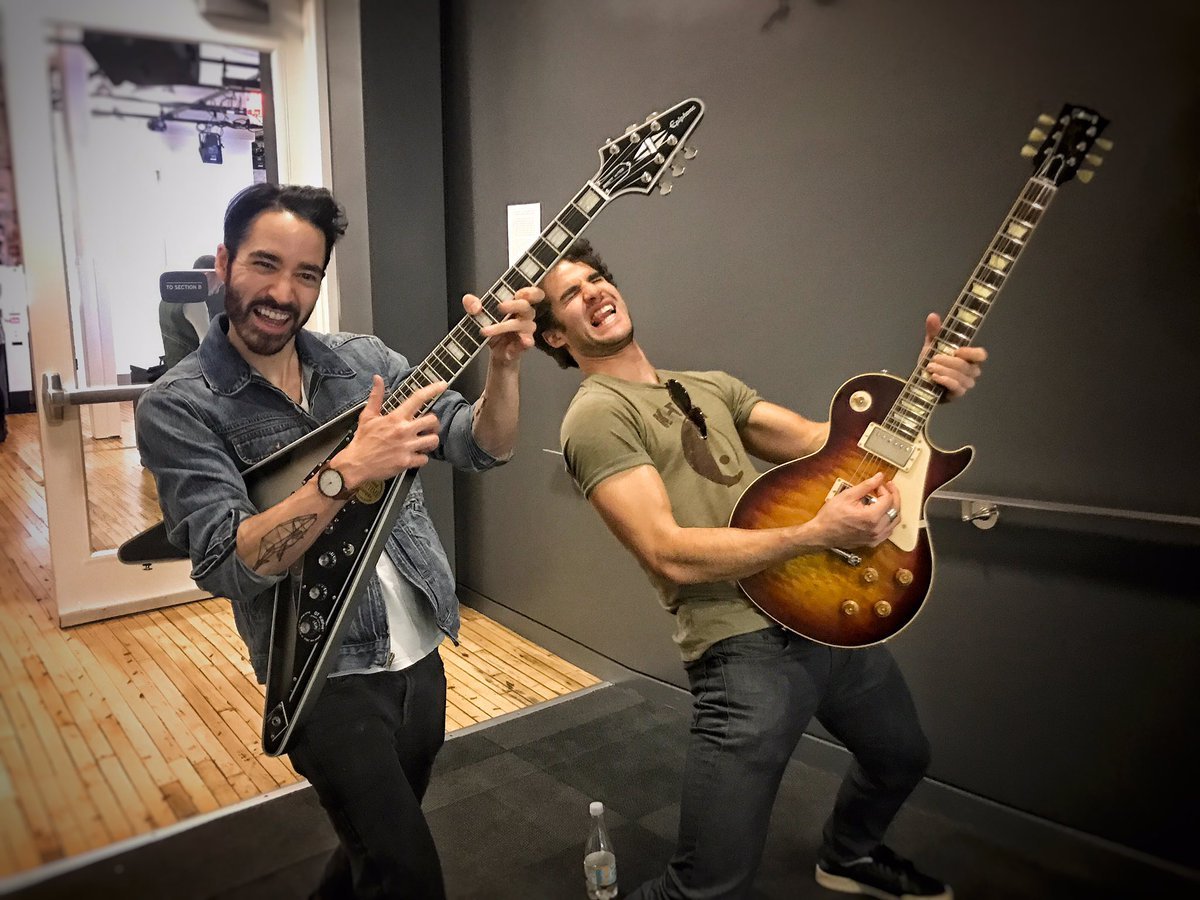 
This is an entertaining video to watch.  Poor Chuck looks a bit confused, while Darren is singing his head off.