Darren was in Ft. Greene Park in Brooklyn, performing and doing some introductions of other entertainers for "Broadway in the Boros," featuring music from "Beautiful," the Broadway musical about Carole King.


He said in this interview that he will be making announcements about Elsie Fest in a week or two.

I know he is not using the same site in NYC that he used last year (the JBL Live Concert venue at Pier 97, NYC).  A while ago, Elsie Fest had asked in a poll if folks preferred Brooklyn over a New Jersey site, with most preferring Brooklyn.   @ElsieFest   It is a smart move for him to be taking part in "Broadway in the Boros," considering that he will be hosting Elsie Fest, possibly (most likely?) somewhere in a park in Brooklyn.  Someone stated that he said the locale for Elsie Fest 2016 may be near water. 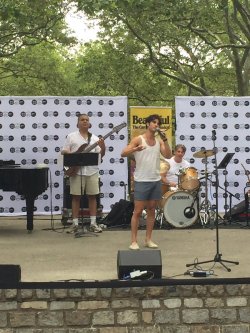 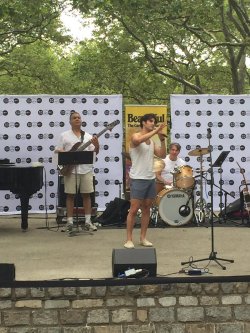 The beginning of the interview is a little amusing, because Darren didn't know she had begun filming and he was taken a bit by surprise.   Was she only using her cell to film?  Poor Darren.  Luckily, he didn't say anything awkward at the beginning, like a string of curse words.

106.7 Lite FM With Darren Criss Brooklyn in the Boroughs.


It's fantastic that we are getting an announcement about Elsie Fest soon!

A nice short interview about Darren praising the program "Broadway in the Boros."    Some of what he says also applies to Elsie Fest, spreading the interest in musical theater to areas outside Manhattan.


madein_ny Our #BwayintheBorosperformance this afternoon featured a surprise performance from @darrencriss! He took a moment to talk about why it’s great we’re bringing #broadway to communities throughout #NYC this summer.