Lin wrote:Amazing seeing him as #1 on the call sheet

Hey Lin, can you explain to me the significance of being the first on a call sheet for a TV show?    Thank you!

And thank you for posting both YouTube videos.  They are much better quality, and it's great that there is a video for those outside the U.S.!   I like how in this promo video, as Cunanan walks through the pool, it appears as if a trail of blood is left in his wake.  And there is the menacing music as Cunanan approaches the dozing Versace.  Darren is so good in terms of how expressive is his body language.  Just the way Cunanan walks up the pool steps to Versace, expresses the movements of a stalking predator approaching his unsuspecting prey, and then Versaces eyes shoot open at the end.

Yes, I agree, these teasers are so effective!  I agree, I especially like the one with the body/suit bag.   You have had great instincts in the past, Lin!    And it seems you have done your research about the timing of the first trailer for Season 1 of American Crime Story and the timing of Versace promo videos released in sync with AHS episodes.  Cross fingers we get a trailer video soon!


How cool that AHS is dealing (in their own way) with the issue of Trump, Jeremy! 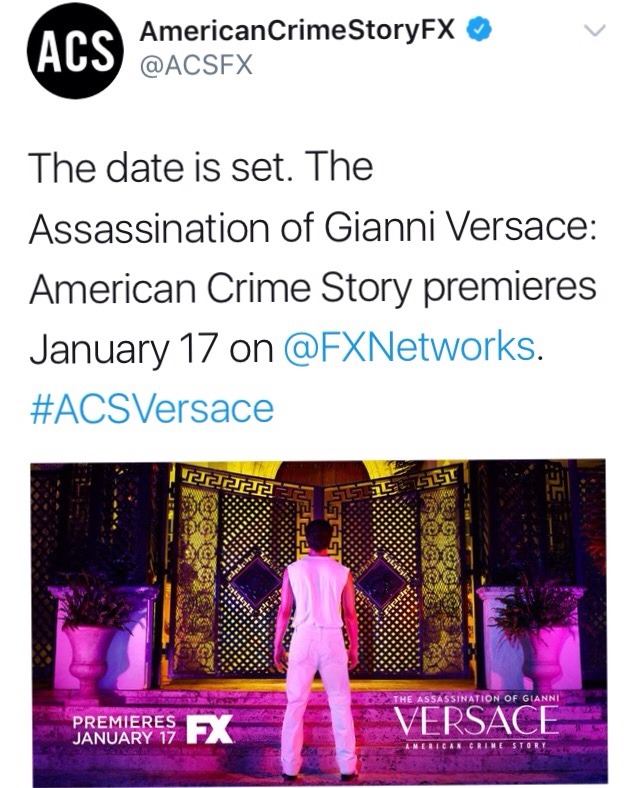 This headling cracks me up.

Vulture wrote:
Darren Criss and His Murder Speedo Are Here to Tell You That ACS: Versace Arrives in January

Ryan Murphy knows how to cut together a 30-second promo, we’ll give him that. FX has released a brief teaser featuring Darren Criss in a Speedo to remind you that The Assassination of Gianni Versace: American Crime Story premieres on January 17. The series stars Edgar Ramirez as Gianni Versace, Penelope Cruz as Donatella Versace, Ricky Martin as Antonio D’Amico, and Darren Criss as the murderer Andrew Cunanan, who will apparently be wet, well-muscled, and wearing a Speedo. Okay, Ryan, we get it. 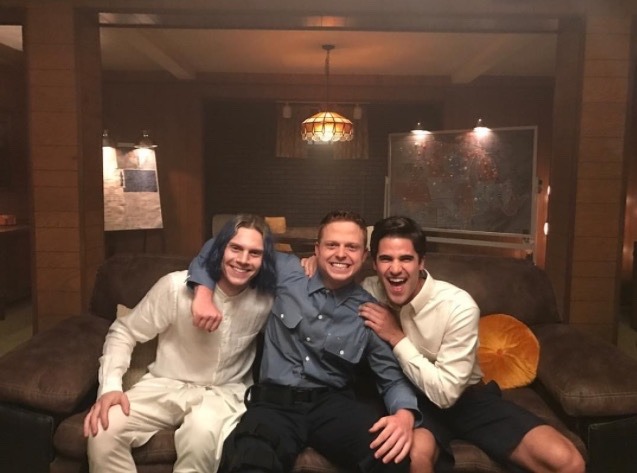 A Speedo-clad Darren Criss takes a dive into a luxurious pool in the new teaser for FX’s upcoming miniseries “The Assassination of Gianni Versace: American Crime Story.”

The series is produced by Fox 21 Television Studios and FX Productions.

The Assassination of Gianni Versace, the second installment of Ryan Murphy’s American Crime Story series, will premiere on FX January 17, 2018, at 10 PM ET.

The limited series features Darren Criss (Glee, Hedwig and the Angry Inch) as serial murderer Andrew Cunanan, as well as Edgar Ramirez, Penelope Cruz, Ricky Martin, and Tony winner Annaleigh Ashford. The latter plays Elizabeth Cote, a friend of Cunanan who asked him to surrender in a taped plea.

FX has set January 17, 2018 (10 pm/ET) as the premiere date for the second season of its anthology series AMERICAN CRIME STORY: VERSACE. The second installment will star Broadway alum Darren Criss (HEDWIG AND THE ANGRY INCH) as serial killer Andrew Cunanan and Tony winner Annaleigh Ashford as his friend, Elizabeth Cote. Ricky Martin, Edgar Ramirez, and Penelope Cruz round out the cast.