Fan Comments and Reviews, and Comments from others, who saw Darren in Hedwig and the Angry Inch on Broadway - Sun Aug 21, 2016 1:19 am


A review by a fan of Darren, who is also a fan of Hedwig.  She had seen it off-Broadway.

pavarottisrevenge wrote:
June 12 Curtain call. (If you use, please credit me. Thanks)

They all did such a fantastic job!! I have been a major fan of Hedwig since I was 9 years old. My Yia Yia had taken me to see it off Broadway, and I fell in love with her instantly.

Darren’s portrayal of the East German rocker was breathtaking. From the moment Hedwig descended from the rafters, she had everyone in that audience by their shirt collars; refusing to let go until the very last second. It was mesmerizing and an honor to witness in the flesh. I will never forget it.

The complete and utter control this man has over his body and emotions is on some whole other level. Never in my 24 (almost 25) years of theatre have I ever witnessed something of that caliber. The smoothness of his transitions from Hedwig to Tommy was gorgeous. It honest to god felt like two people were on that stage- Hedwig and Tommy, rather than just one being. You never even saw the moment of change. (And I was right up on the stage so believe me when I tell you that he was that fucking good.)

My favorite number has to be a tie between Wicked Little Town (Reprise) & Midnight Radio. The rawness and absolute pain/ love he projected off that stage left me in tears. That man reached into my very soul, grabbed it, then left his mark. I could feel all her pain, regret, love, and relief. It just rolled off Darren in waves. Shook me to my very core.

Bravo Darren. I can’t say that enough. You were phenomenal tonight. Thank you for sharing your Hedwig with us, because she was heartbreakingly beautiful.


This person is a big fan of JCM and of Hedwig.   I scrolled down on his twitter page during the period of season 6 of Glee and I didn't see anything indicating he followed Glee or Darren.   Here is his twitter conversation with Bass Hall, after someone from Bass Hall saw Darren in Hedwig:


@basshall @DarrenCriss hope he kills it! Seeing it in June and that's my all time favorite show. Better not disappoint!


Then he saw Darren in June, and commented positively on Darren's performance, as well as on how kind Darren was at the stage door. 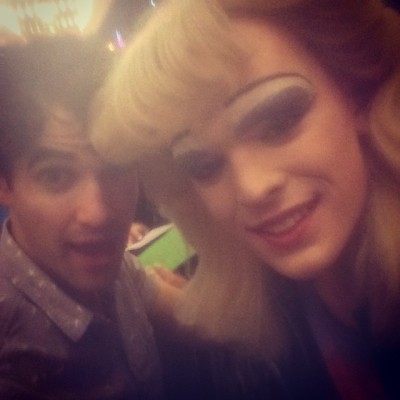 connorjohn: Thank you @darrencriss for doing Hedwig so much justice. And thank you for being so kind at the stage door. You are the kindest soul I’ve met
June 13, 2015
DCN

@megaraamx Gigi was amazing! Darren is really good and one of the sweetest people I've ever met.

@ConnorJon_ I was really impressed by him too! His Tommy Gnosis was on point.