More info about Darren's part in The Little Mermaid at the Hollywood Bowl.

Darren gets a showcase number.

L.A.Times Article:
In Defense of Ariel:  In a post-'Brave,' post-'Frozen' world, why the time is right for Hollywood Bowl's 'Little Mermaid'


"Those familiar with the film but not the theatrical work — a production of which, coincidentally, opens June 3 at the La Mirada Theatre for the Performing Arts — will see the film pause to give Prince Eric, performed by Darren Criss of 'Glee,' a showcase number."

Also some more info about what to expect:


"Kraft says he wants the artists to feel they have free rein to interpret the songs, but there are some limitations. 'It's in timed sequence to the film,' says Engel, who along with Kraft last year brought 'The Nightmare Before Christmas' to the Hollywood Bowl.

'We want them to bring their own performance of it, but the music and the words are still in sync with the film,' she says, 'with the character on the screen.'”


“'I discovered that three of the main characters in the movie don't have any songs,' says veteran manger-agent Richard Kraft, who also serves as the show’s creative director and, with Laura Engel, oversees Kraft-Engel Management.

'But there was a Broadway show where those characters did have songs, so we inserted into the evening some of the Broadway songs to give the other characters a chance to sing. We went back to the original movie, and found where in the movie [the song] would be, and we're building the movie around that premise.'"


Darren is in rehearsals today for The Little Mermaid. 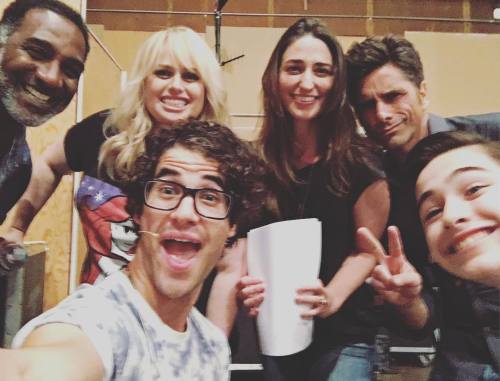