I don't think this video was posted yet.  I skimmed through the previous Q & A video done by SHNSF and I didn't see this part (but not completely sure, could have missed it in the previous video). 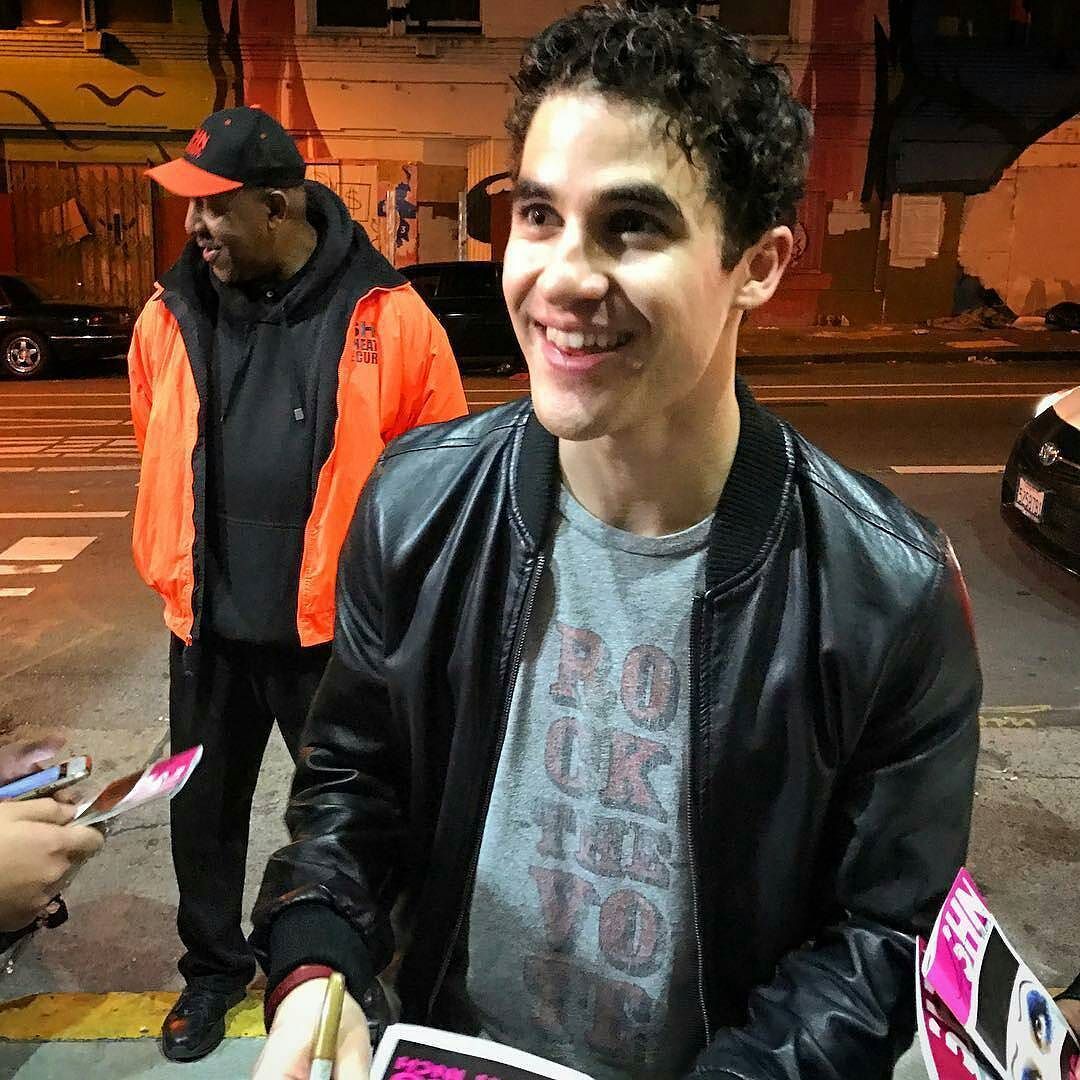 Look who we ran into after Hedwig? It’s #darrencriss

It's true what this fan says.  You don't need the sound on, you don't need to hear the words being said, because it's clear just watching him in action, how Darren tries to engage with his fans.

zoerenee0: No sound because there is no need to hear the screaming and giddiness that was all around me, but he was so sweet, I’m very glad I waited to meet him 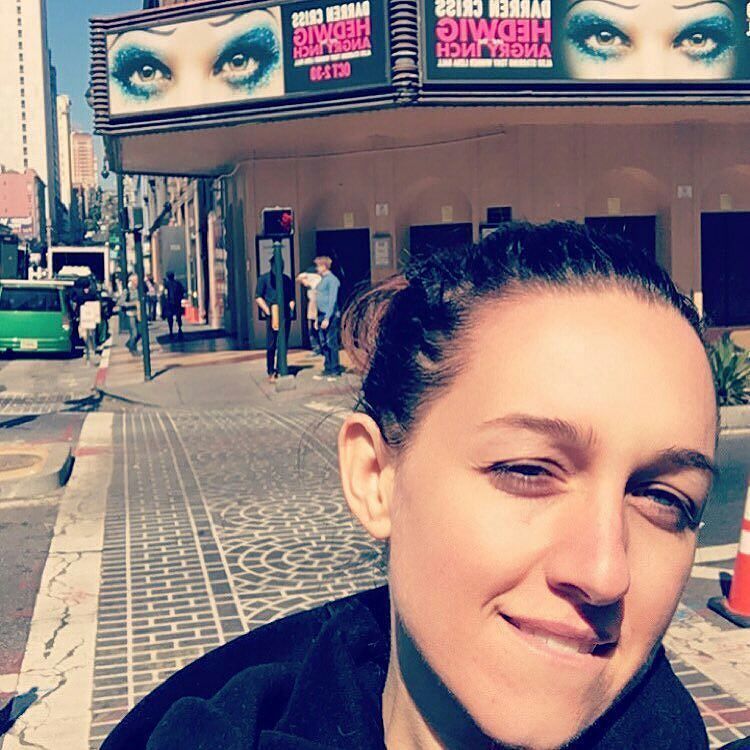 Kevin Ray of the band, Walk the Moon. 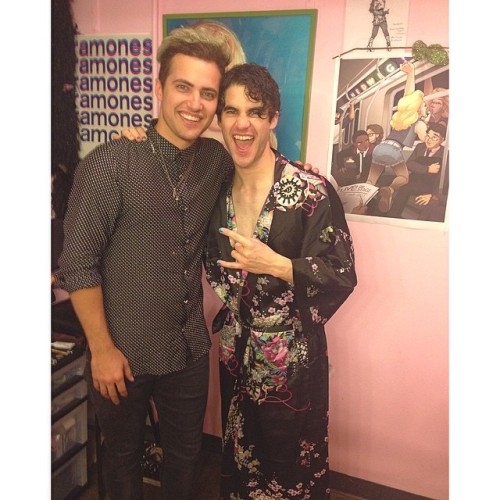 wtmkevin: Had to make my first #Broadway experience a good one and see my buddy @darrencriss absolutely come alive in #Hedwig. So proud
July 16, 2015
DCN 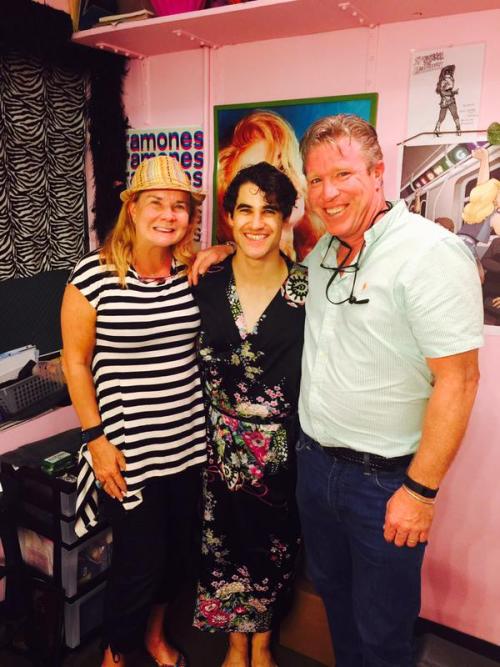 MinervaProd: @DarrenCriss you were amazing tonight! Our fave Hedwig and the biggest heart!

Producer of Girl Most Likely 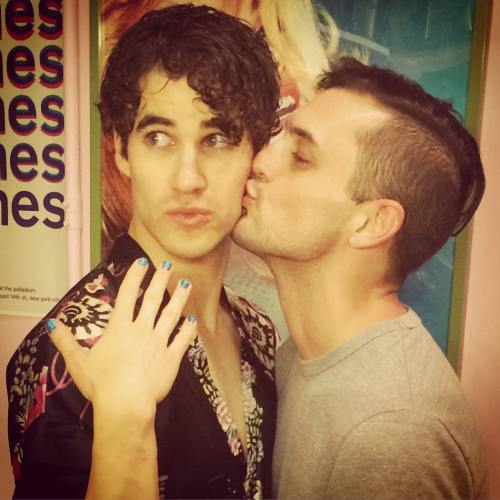 Note:  Wesley Taylor is an actor (Rock of Ages and Addams Family on Broadway). 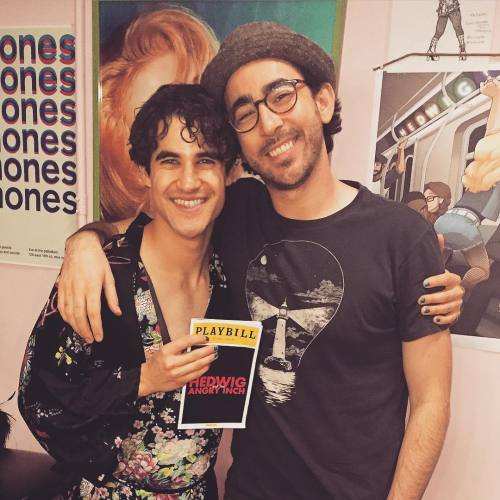 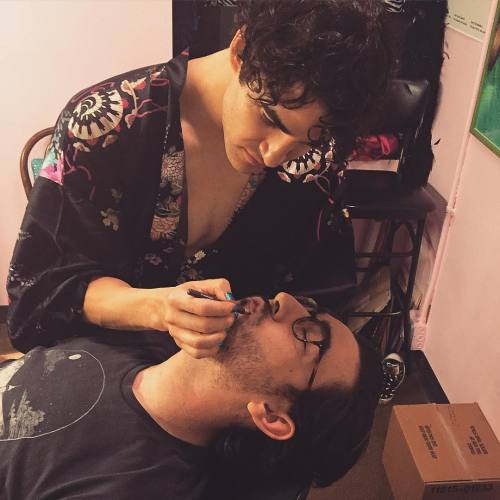 Note:  Max Crumm is an actor (Grease, Disaster!).  (And I have no idea why Darren is applying make-up to Max.


And his friend, Tomek Miernowski. 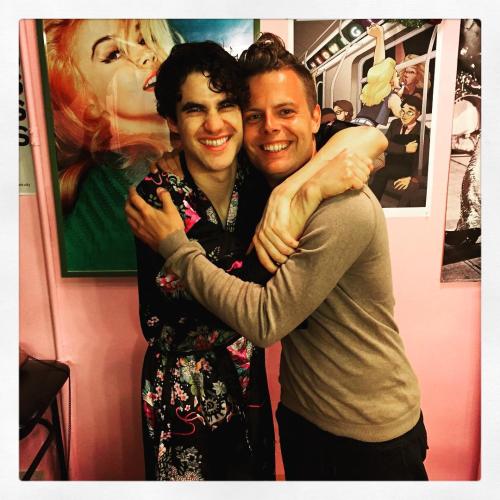 tmierno: Yeeeaaaaa!!!!!! This kid had me beaming with pride. Something tells me @darrencriss may hit the big-time someday…. [July 17, 2015]
DCN

And the actor who played Blaine's mom, Gina Gershon, came to see him. 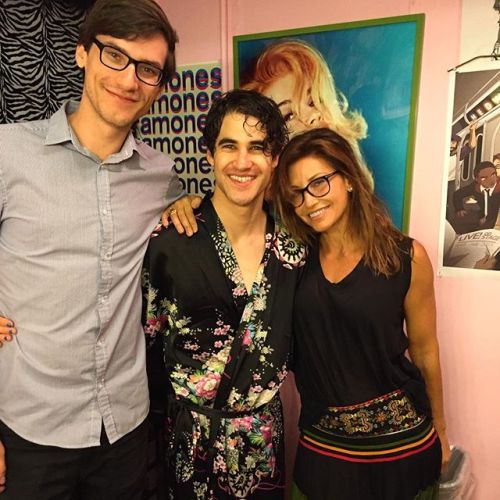 ginagershon: Caught the matinee with my favorite nephew @samfishell to see my fake gay #glee son @darrencriss in his AMAZING portrayal of Hedwig in #HedwigAndTheAngryInch. He was so great ! Congrats! Haven’t seen the show since it opened many years ago. Its even better!
July 18, 2015
DCN
Search in: Hedwig and the Angry Inch--Broadway (4 Threads: Media Reviews; Non-Media Thoughts; Pics & Gifs; Who Saw Darren in Hedwig on Broadway)  Topic: Who saw Darren in Hedwig and the Angry Inch on Broadway?  Replies: 30  Views: 3479

Pic from Mike Potter (the Hedwig on Broadway make-up and wig-designer guy).  He's been designing wigs for John Cameron Mitchell for Hedwig since 1994 (SqueezeBox club).   He posted this pic on Darren's opening night on Broadway for Hedwig and the  Angry Inch. 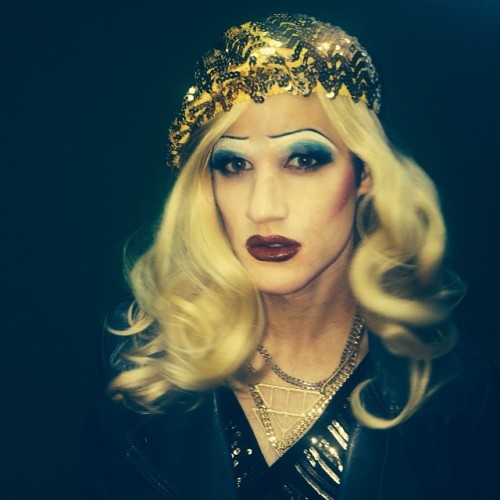 pott28: Darren Criss blew my mind tonite. The audience LOVED him SO MUCH. I’ve never seen Glee but now I know what a Gleek is. And I like it. Long live Hedwig. @darrencriss #darrencriss @hedwigonbroadway #hedwigonbroadway @glee #gleeks
April 29, 2015
DCN 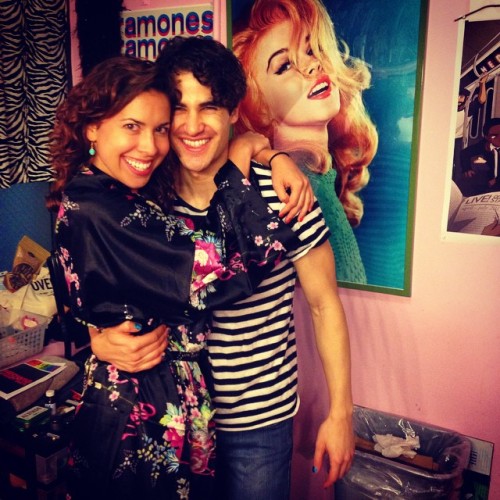 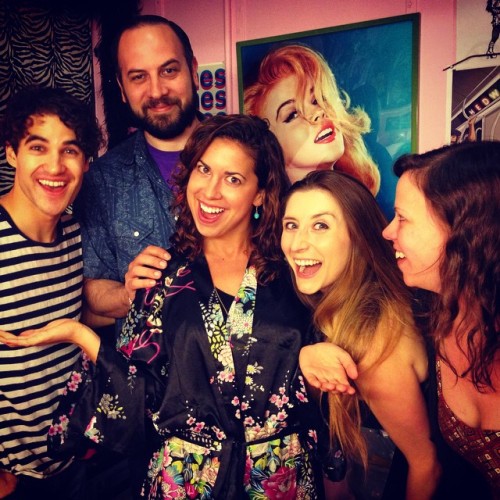 merediddys: So nice of Darren to come see me today!

And Matthew Morrison from Glee. 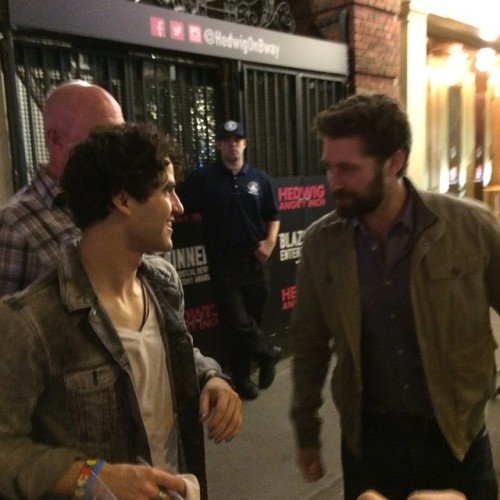 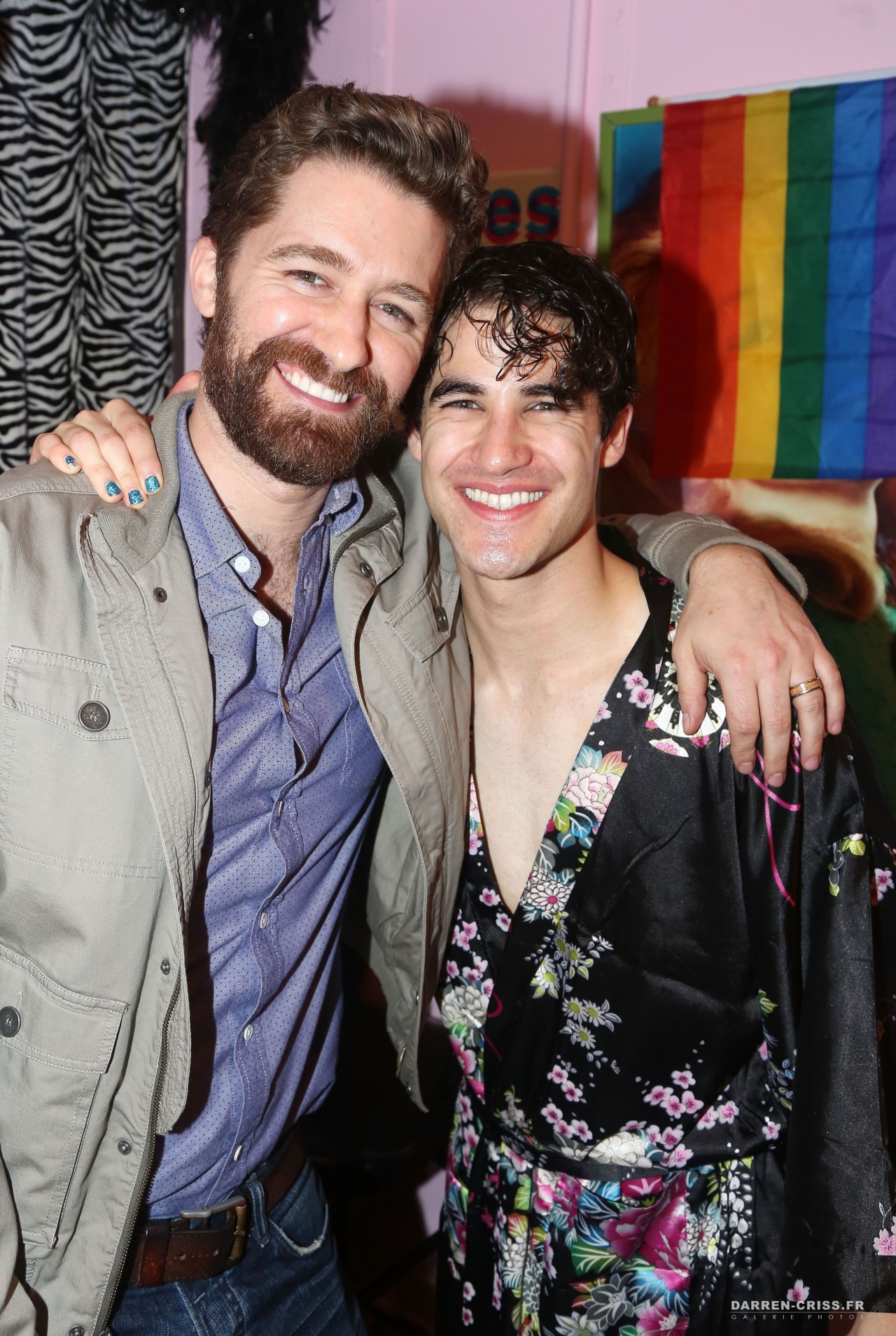 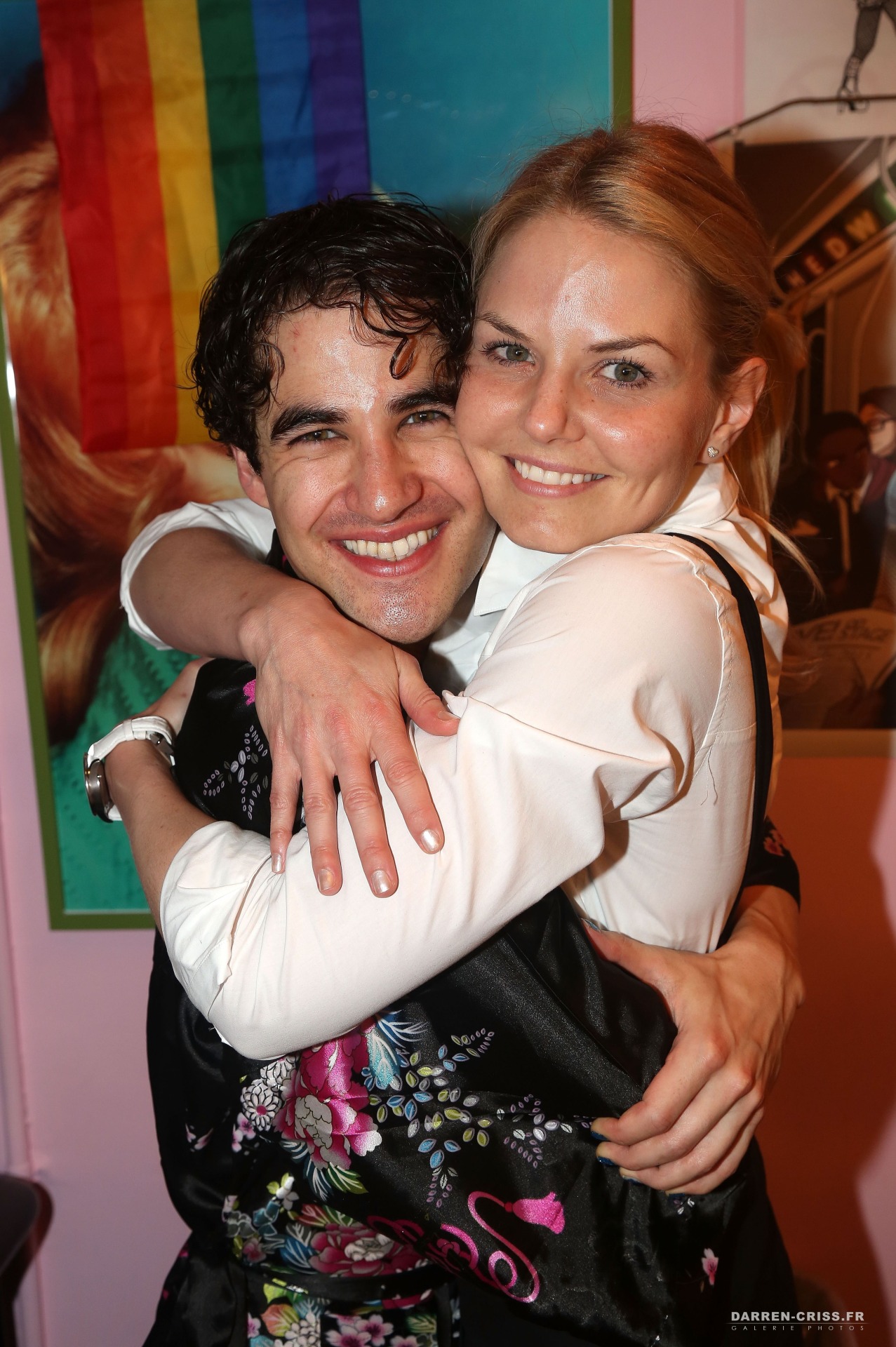 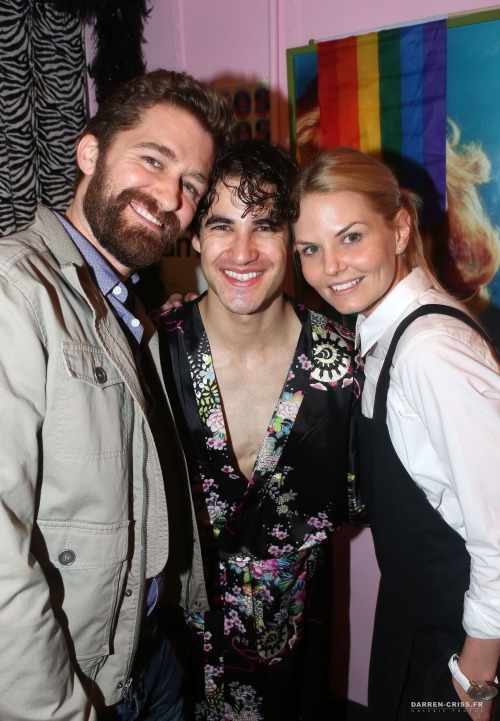 Fan Comments and Reviews, and Comments from others, who saw Darren in Hedwig and the Angry Inch on Broadway - Thu Sep 01, 2016 1:08 am

The Culturalist had a "Hedwig showdown."   John Shevlin tweeted in regard to that.

JCM is Hedwig, but Darren Criss has made her his own character. Very different.This poll isn't possible without NPH  https://t.co/5K9vZNmHAj


Review by gleekto (a fan of Darren), who also saw NPH in the role.  Her review is quite detailed, and I am posting an excerpt (but I urge you to read her entire interesting review).

gleekto wrote:
A Dream or a Song that Hits You So Hard: My Hedwig Experience

I went to Hedwig last Wednesday and Thursday June 24 and 25, and I am still reeling in the emotions.

4. I came into this show looking forward to Origin of Love, Wig In a Box, Wicked Little Town, Midnight Radio - And while Midnight Radio is still the heart of it all for me, the hard rock songs - Sugar Daddy, and especially Angry Inch, and Exquisite Corpse - knocked me out. I wrote this already but I did not like Angry Inch at all when I first saw Hedwig and it turned out to have the most emotionally gutting moment of the show with Darren. It’s been going through my head for days and while context is different, I can totally connect with that anger. He is unreal on those hard songs.

5. Darren’s acting is so layered and complicated in the whole thing and most of all he is epic at vulnerability - The moments for me -  As Hedwig wakes up from her botched sex change operation - Her face  - you feel the drugged shock, terror, anger. The moment took my breath away both nights. Another - Hedwig’s facial shift the 2 or 3 times she mentions her father - if you’re not close, you may not even see it but Hedwig goes from sweet, sassy Hedwig to pools of anger and hurt and then back again.

I know many reviewers have said this - but there really is a magnetic sweetness to Darren’s Hedwig. Somehow she is so compelling and sweet, you want to please her and love her and can easily forget how truly terrible she is being at various moments - particularly to Yitzhak. Such a brilliantly complex portrayal.

The show is brilliant. My heart is cracked wide open. The brightest star.

@DarrenCriss I saw Hedwig tonight and I am a changed man. You've reignited my passion for performing and I can never thank you enough.

Note:  I scrolled down the twitter page of @trustthelogan for the period of season 6 of Glee and I did not see any indication that this person followed Glee or Darren.

I thought I would note how Darren made certain comments during his performance on June 26, 2015, acknowledging the Supreme Court decision about the constitutional right to marriage equality across our country (Obergefell v. Hodges).

A couple of nice comments about this Friday night performance on June 26, that was posted on HedwigOnBway's Facebook page:

-From Bob Hettinger:  "Tonight's show was magical!  Thank you's to the cast for an experience that I will not soon forget!"

Note:  Stephanie Dunbar is a Glee fan, and works in the TV industry.


Nice comment (with photo) from someone who enjoyed NPH in the role (but I cannot post the photo):

Saw Darren Criss in Hedwig and the Angry Inch tonight!! Fantastic!!! Different than the Neil Patrick Harris version, but just as entertaining! Such a huge talent!
Barry Thomas Patterson with Greg Raynes at Belasco Theatre.
June 27, 2015

@actingjen  I'm beyond happy that I got to watch @hedwigonbway! The show is wonderful and @darrencriss did a fabulous job as Hedwig. Plus any performer that talks to the first few rows genuinely thanking them for being there and participating in the show deserves great praise. #hedwigandtheangryinch #hedwigonbway #hedwigonbroadway #broadway #theater
June 27, 2015