[mention]Poppy[/mention] wrote:Darren's interaction with her was very sweet.  Lilikoiluv, do you mind if I post it in this thread?  Fan Experiences during 2016

Thank you for doing that, Poppy!

[mention]Poppy[/mention] wrote:Did he record Darren's CD in Chris's own room too, if you happen to know?     He just had a wedding this summer too, right?

lol.  I just realized that I never explained that Bryan (who tweeted last night) is Chris' brother.

IIRC, most (if not all) of Darren's "Human" EP was recorded in Chris' home studio. (Is this right, Lin?) Darren used to comment on how things have changed and we now live in a DIY world, and this is a perfect example. Here's one of Chris' youtube videos where Darren talks about this:


And yes, Mia and Darren attended (and played music) at Chris' lovely wedding this past summer.

[mention]Poppy[/mention] wrote:I think it says something when someone has reached celebrity status, yet stays grounded and keeps in touch with the friends that he had before he became famous.   I really like that about Darren.

Beautifully said, Poppy! I like that about him too. That is an incredible accomplishment within the crazy whims and demands of the entertainment industry and speaks volumes to the strength of Darren's character.  8) Yet another one of the many, many reasons to admire Darren Criss!

Via DDN: Darren's seems to have worked out this morning in anticipation of opening night (or, you know, just to work out...lol) 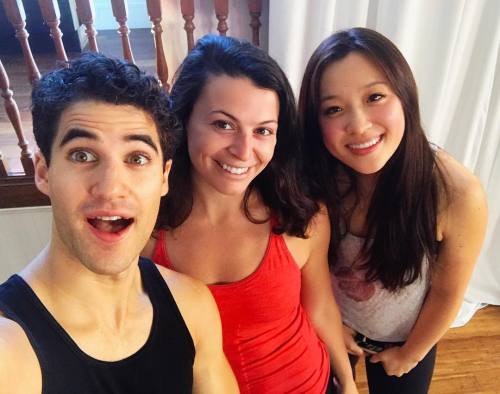