beadiazmiami Its a wrap! So grateful to have gotten to work on ‘American Crime Story; Versace/Cunanan’ show, for the weeks they shot in here in Miami. Great crew and cast! Coming out in January on FX. #acs #versace #hair #hairstylist #blessed #grateful #makeup #makeupartist #filmshoot #tvshow #setlife #crewlife #locationshoot #miami #miamibeach #americancrimestory

I like the parallelism between this message and a previous promo photo with Cunanan's face, with the message "He killed more than an icon." @ACSFX: Silence killed more than an icon. The Assassination of Gianni Versace premieres 1/17 on FX. #ACSVersace @ACSFX: From creator Ryan Murphy. FOLLOW to preview The Assassination of Gianni Versace. @ACSFX: Uncover the crime. FOLLOW to preview The Assassination of Gianni Versace @ACSFX: Through tragedy, family remains. The Assassination of Gianni Versace, the next installment of FX’s award winning series, premieres 1/17. #ACSVersace Jeremy wrote:I hope we'll see him everywhere in a few months, as they say in the article.

And we don't need to wait the airing of the season to give him his Emmy, the trailer is enough

Yes, I'm sure the cast and Ryan will be doing a promotional media blitz, which will be a lot of fun for us to watch and will tide us over until the show starts in January.

ha!  I will be the first to sign the petition to the Television Academy to change the rules.

Jeremy wrote:Well, I expected him to have less social life and I also didn't know he met Versace before the murder.

I think some of the interviews talked about how Cunanan was not what one would expect, because he was a spree killer who could be likeable, and charming (this is part of the reason why Darren is perfect for this role, beside being half Filipino like Cunanan, Darren is so good at networking and is naturally charming).   I could be wrong about this, so take this with a grain of salt, but I believe it hasn't been confirmed that Versace actually met Cunanan, although Cunanan boasted he had met Versace a couple/a few times.

And yes, the trailer was a surprise for me, because of how much focus Cunanan received.  I am very pleased about this!


Here are a couple of more articles that I thought added something other than what was already covered by other media articles:

Vanity Fair wrote:
The First Look at Versace: American Crime Story Goes Inside the Mind of a Murderer

The Assassination of Gianni Versace: American Crime Story is going deep into the mind of Andrew Cunanan, the serial killer who fatally shot fashion designer Gianni Versace in front of his Miami home in 1997. FX has released the first trailer for the dark, glittering series, executive produced by the impossibly busy Ryan Murphy, and it quickly hones in on Cunanan’s grim world.

Bright-eyed star Darren Criss plays the killer, going into full American Psycho mode as he leans into the role of a hustler who embeds himself in Versace’s world. There’s a near-perfect montage of Cunanan’s dark evolution, with shots of Criss screaming into the ocean, wielding a pair of deadly scissors over a potential victim, and standing alone in a room, his face and body covered in blood.

The trailer also offers glimpses of the rest of the high-profile cast. Penélope Cruz plays a beautifully heartbroken Donatella Versace, Gianni’s sister, as she promises to maintain her brother’s legacy. “I will not allow that man, that nobody, to kill my brother twice,” she vows. Donatella would go on to run her brother’s empire, maintaining Versace’s reputation as a high-end fashion brand. She’s still a power player to this day, currently preparing to co-host next year’s Met Gala with Rihanna and Amal Clooney.

Ricky Martin also makes an appearance, playing Antonio D'Amico, a model and designer who was also Gianni’s longtime partner. Then, there’s Édgar Ramírez as Versace himself, fully inhabiting the luxe role of the high-flying designer. The Assassination of Gianni Versace: American Crime Story will premiere on Jan. 17.


This article mentions the Broadway work of Darren and Ricky Martin (although they also should have mentioned Hedwig and the Angry Inch), as well as Ryan Murphy's Broadway project, The Boys in the Band.


Darren Criss stars as Andrew Cunanan, the man who murdered fashion designer Gianni Versace in 1997, in the trailer for FX's upcoming series, The Assassination of Gianni Versace: American Crime Story.


The series co-stars Ricky Martin as Versace's partner Antonio D'Amico, Penélope Cruz as his sister Donatella Versace, and Edgar Ramirez as the assassinated designer himself.


Versace is set to feature several Broadway artists. In addition to Criss and Martin, who have appeared on Broadway in revivals of How to Succeed and Evita respectively, the series is headed by executive producer Ryan Murphy, who will bring a production of The Boys in the Band to Broadway this spring.

Yea!  They are finished filming!  So happy for Darren!   Job well done, Darren!   Now, you can really party, Darren! 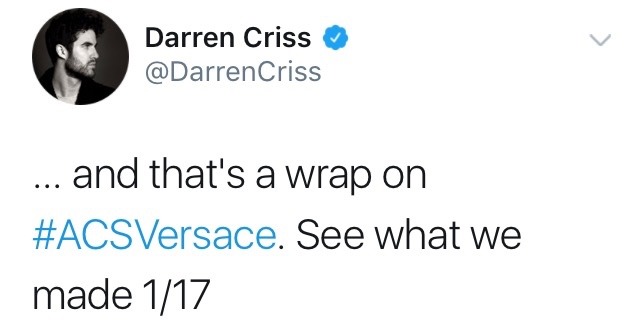 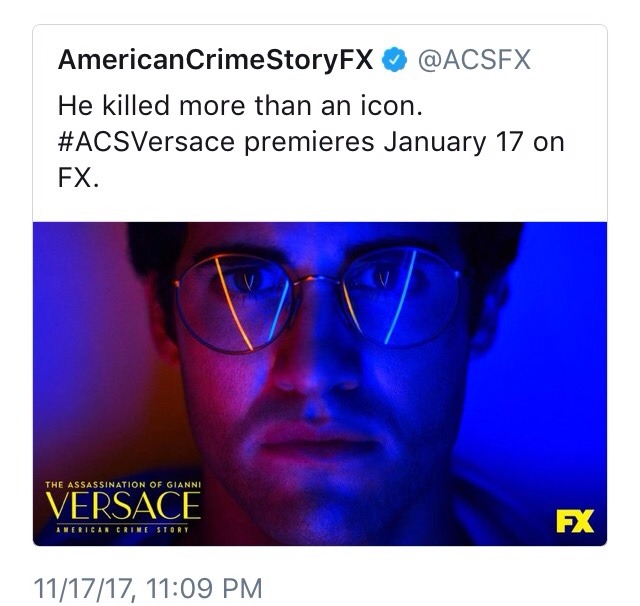 Love how supportive and sweet Joanquin is. 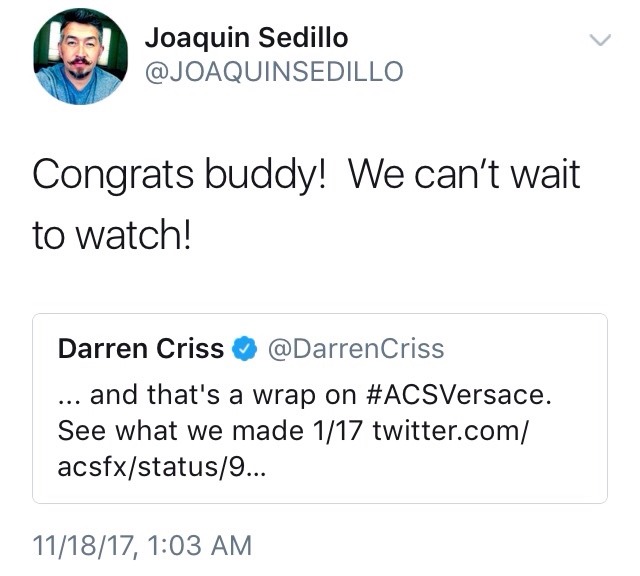 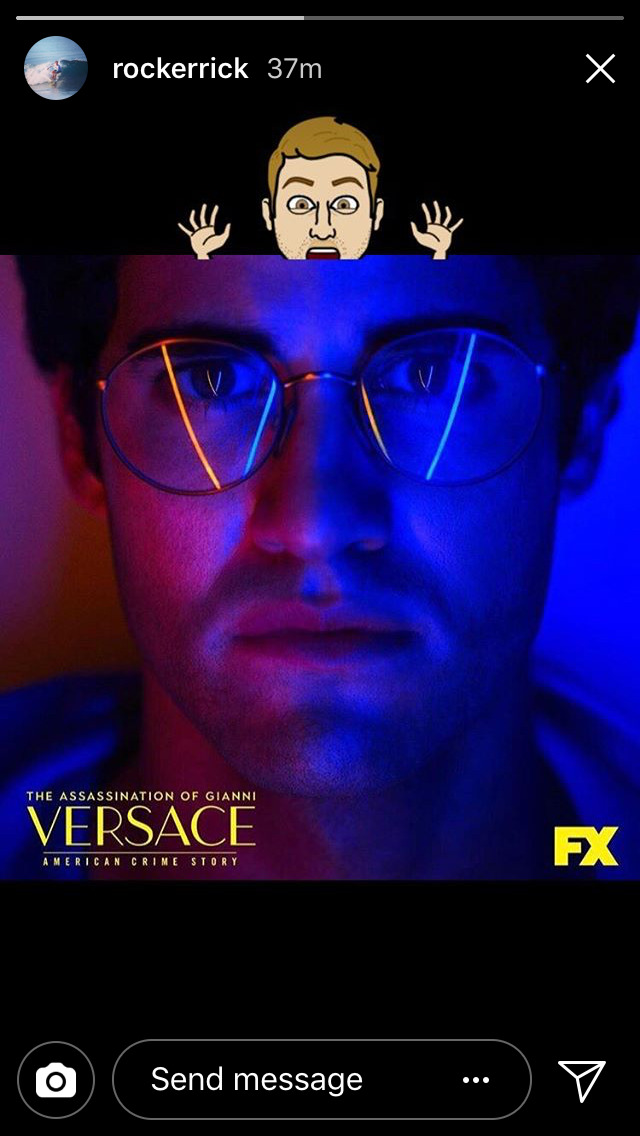 
ACSFX: He killed more than an icon. #ACSVersace premieres January 17 on FX. I love the mutual support shown between Darren and Bruno Major.