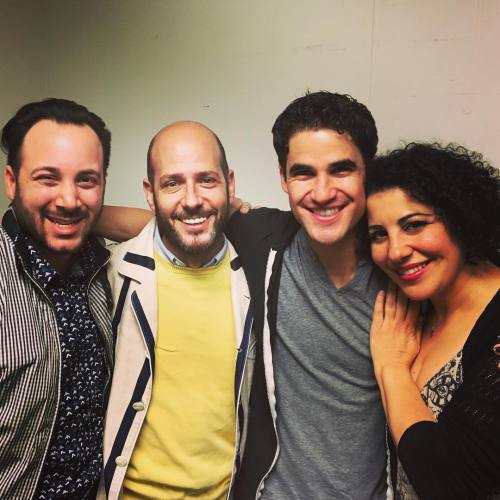 juliegarnye:Then sometimes your friend Darren absolutely blows you away to the point of speechlessness. @darrencriss - you had my heart from the first downbeat of tonight. Tonight, you were BEYOND. Absolutely magnificent in every possible way. I adore you, you crazy talented man. #hedwig #cherrypopped melodysev: Hanging out backstage with Darren Criss! Thank you @darrencriss for being so awesome tonight! Much transformers love to you! You freakin killed it tonight in a show that’s so dear to me! I know you’re going to rock all the upcoming shows as well! #Hedwig #hedwigandtheangryinch #pantagestheatre #spinningtoyourrockandroll #itsacarwashladiesandgentlemen #darrencriss #amazingshow 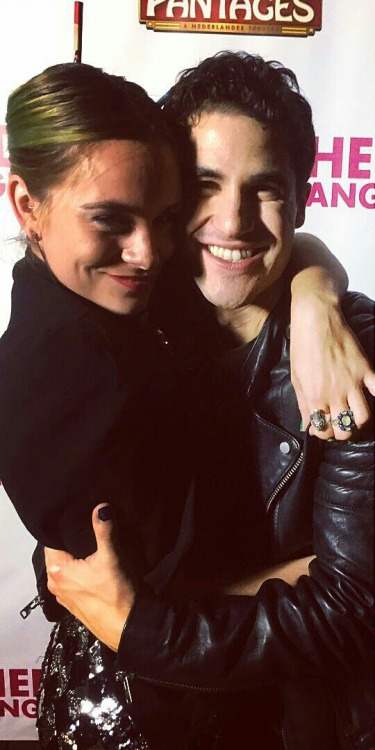 fallenjunkie:
lulureneeb: Thinking back on last night at the #hedwigandtheangryinch opening. I still feel like I’m picking my mouth up off the floor because this fella right here completely rocked my face off. The show is filled with so much sass and excitement! It pulled at my heart strings and made me want to wear a lot more glitter. #neverabadthing SO PROUD OF YOU D! @darrencriss

There is no intermission – just ninety minutes of no holds barred rock music, fabulous drag costumes and wigs, and a gradual stripping down to Hedwig's most vulnerable self. In this touring production, led by Darren Criss, who played the role for five weeks on Broadway and co-starring Lena Hall, who won a 2014 Tony in her role, we hurtle toward the conclusion with no chance to pump the brakes.

Simply put, the show is fantastic. Criss has made a career playing clean-cut guys with a boyish charm, like his breakout role as Blaine Anderson on "Glee." His sterling takes on pop hits like "Teenage Dream" and covers of Disney songs have demonstrated his winning vocal abilities. With Hedwig, Criss kicks through that strait-laced image with all the power his high-heeled gold boots will allow. He shows impressive range – moving from the ballad storytelling of "The Origin of Love" to the raunchy antics of "Sugar Daddy" to the bouncy pop of "Wig in a Box" to the vulnerable ache at the heart of "Wicked Little Town." He kicks, climbs, and sashays his way around the stage, jumping into the audience to gyrate on top of guests.

Watching Criss in the role is like watching a live hurricane take the stage – unstoppable and full of power. He commands your attention from the word go. One minute making you gasp with laughter at a joke unsuitable for print, the next breaking your heart with a tale about a search for love and acceptance. Criss reaches down into new depths to expose Hedwig's soul to us, and it pays off in spades. He is, in a word, mesmerizing – sexy, raunchy, raw, and utterly thrilling to watch.

"Hedwig and the Angry Inch" is a lot of things – a showcase for its two immensely talented leads, a hell of a good time, and ultimately, a meditation on acceptance, self-love, and what it means to be complete – a reminder that we can't really love until we first learn to wholly love ourselves.  Rock concerts can amp you up and send you out into the night on a cloud of glitter and good vibes – it takes putting one into a Broadway musical to make it an experience that also makes you take stock and perhaps be kinder to those around you, and above all, yourself.

laist wrote:
'Hedwig,' Now A Broadway Diva, Is Back In Town At The Pantages


While laugh lines wash over us a mile a minute (some pretty funny, many worthy of Vegas lounge act patter), the best part—the defining part—of Hedwig, as they always have been, are the musical numbers. Engaging as he is in Hedwig's ongoing chat with the audience, Criss becomes a hyper-dynamic figure in these great songs. Backed by a four-piece punk band ensemble dubbed The Angry Inch, along with Hall's Yitzhak, Criss irresistibly evokes the kind of restless exuberance that has always been inherent in the performances of punk icons like Iggy Pop and the New York Dolls. Costumed by Arianne Phillips and groomed by Mike Potter, Criss' Hedwig is also totally glam enough for Hollywood.

One might have been forgiven at the end of the last century for hoping that Hedwig was going to nudge American musical theater in a new direction with an expanded musical and thematic range. So far, that's happened sporadically at best, though a few shows like Spring Awakening, Kinky Boots and Hamilton bear traces of their genderqueer theatrical forebear's DNA. Adaptable and renewable as Mitchell and Trask's show has proven to be, at least, we can probably affirm now that we know Hedwig will never die.