Darren Criss: Today’s the day. I’m very proud of all the hard work our cast & crew put into this, and I’m excited to share it with the world. I’d like to remind viewers that these were very real crimes that destroyed very real people.
My heart goes out - as it did every day going in to work- to the victims and their loved ones, who, 20 years later, still must cope with the tragedies that our series depicts.
My hope is that our show can bring some kind of justice to those whose stories have, until now, lived mostly in the shadows. And my prayer is that with all the darkness we explore, we can create some kind of light- by igniting discussion and encouraging much larger questions about ourselves and the society we live in.
The Assassination of Gianni Versace: American Crime Story premieres tonight at 10pm ET on FX. 
Drink up, Darren.  You earned it! 
A lot of love and support and well wishes for Darren. maneeshkgoyal: On his big night, celebrating our wedding singer @darrencriss who happens to also be a superstar assassin with his big premiere tonight in #americancrimestory. #proud maureen_orth: Can’t wait for tonight! #acsversace begins 10 pm FX and @darrencriss will emerge a huge star! Whole cast is outstanding. They all read my book so carefully. #darrencriss vanityfair: Andrew Cunanan would have relished being portrayed by @DarrenCriss, but Criss is empathetic enough to understand that, for all its juicy details, @americancrimestoryfx is an epic story of real-life suffering: “My heart is really sensitive to the people who experienced something so horrible that I’m trying to breathe life into.” The #ACSVersace star and #Glee alum opens up at the link in bio. Photograph by @aspictures. nicolaseftaxias: Today is the premiere of ACS VERSACE #acsversace Good luck @darrencriss and your team on the show ! Was great to meet and work with you ! You are an amazing actor and friend ! Good luck #nofilter we don’t need it !! Xoxo jonothonmitchell: Met @darrencriss last year and he was one of the nicest people ever. So happy to see his performance on #AmericanCrimeStory #Versace tonight. People calling it one of the performances of the decade. Come back to ATL anytime, Darren. I’ll take you to the Clermont! She is with MTV TRL tracymeltzer: do yourself a favor and watch the incredibly talented + wonderful @darrencriss in @americancrimestoryfx tonight. SO GOOD!


We apologize if anything is missing or incorrect, but this is what we’ve got compiled for the #ACSVersace premiere schedule.

(Sorry, still no info for UK/Australia. Check if iTunes/Amazon are available in places without an air date.)

Thanks @ricky_martin for much of the info! 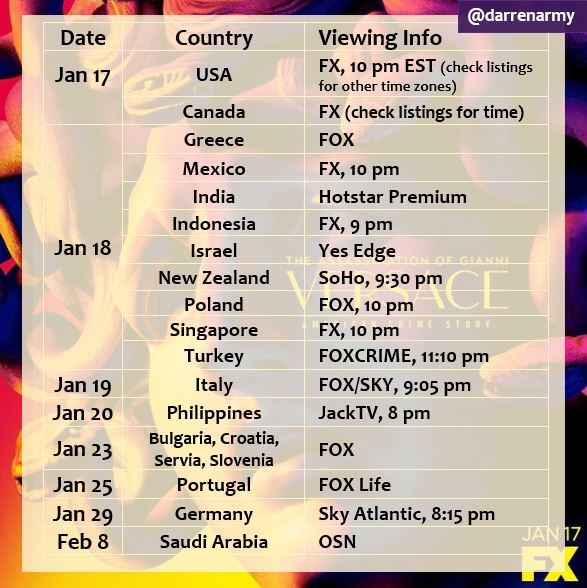 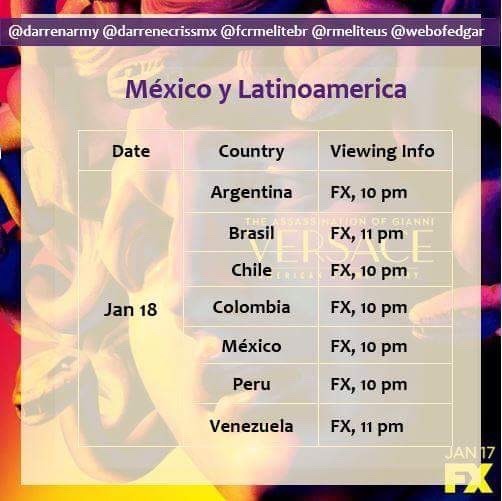 and in addition:
United Kingdom