Congrats to Ryan Murphy, Darren and Penelope, and the cast and crew of ACS Versace, for Screen Actors Guild Award nominations!!  It's amazing how many nominations Darren (and the show itself and the cast) is/are collecting!

(Sorry I haven't been posting as much--still under the weather and also trying to resolve a stressful issue.)

darrencriss Getting to join the Screen Actors Guild was such a huge turning point in my career. Shoutout to EASTWICK for giving me my first union job and official SAG card! I’ll never forget how exciting that was. Thank you to my fellow @sagaftra performers for this nomination! 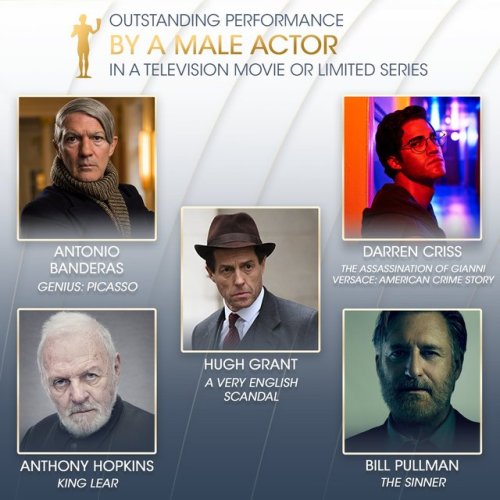 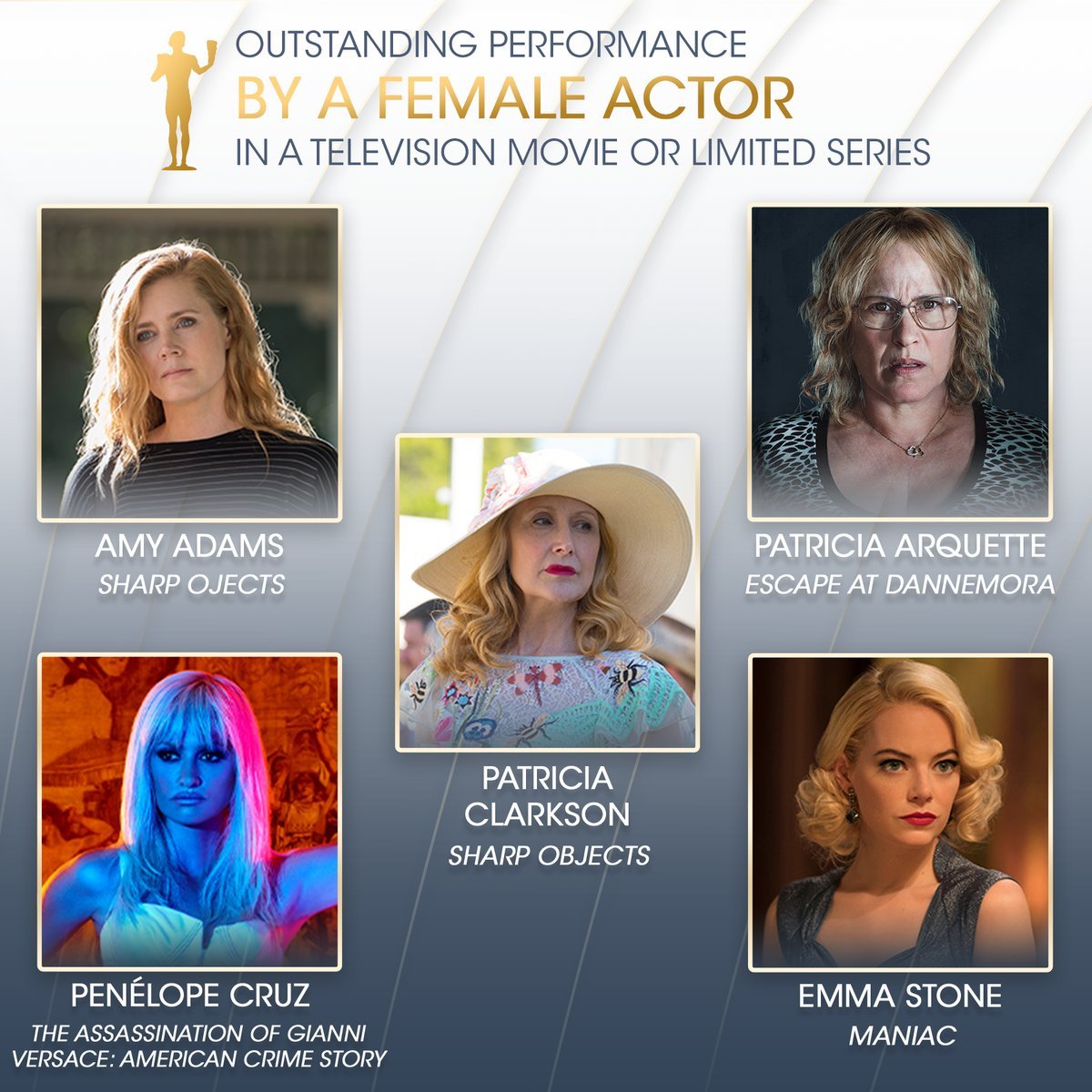 @SAGawards: And your nominees for Female Actor in a Television Movie or Limited Series are: #AmyAdams, @PattyArquette, #PatriciaClarkson, #PenelopeCruz, and #EmmaStone! Congratulations to all the nominees on their outstanding performances! #sagawards 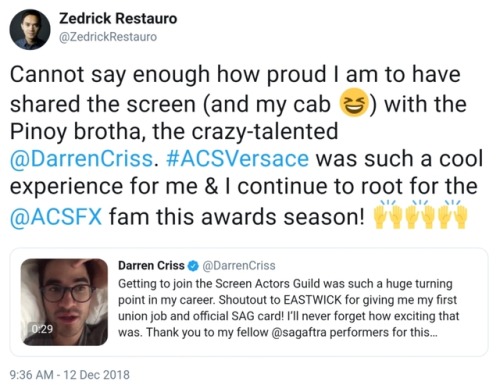 A few articles (via acsversace-news):

Buzzfeed wrote:
25 TV Performances From 2018 That We Can't Stop Talking About

Goodbye Blaine Anderson, because now every time we think of Darren Criss, we’re reminded of his chilling performance as Andrew Cunanan in The Assassination of Gianni Versace: American Crime Story. His Emmy win was totally worth it this year as he portrayed a complicated antagonist that stole every single scene.

American Crime Story’s second-season miniseries, The Assassination of Gianni Versace, never came close to turning into the zeitgeist-grabbing sensation that its first season, The People v. O. J. Simpson, became. But in many ways, it’s even more daring. Loosely told in reverse chronological order — the average episode takes place months or even years before the one preceding it — the series is a deep dive into the pasts of two gay men, a murderer and his most famous victim, shaped by a culture that forced them to keep big pieces of their lives a secret. This American Crime Story miniseries isn’t exactly an uplifting way to pass the time, but the unusual structure and Darren Criss’ riveting performance as the sociopathic serial killer Andrew Cunanan make it vital.

Sadly, few paid attention to Ryan Murphy’s second true crime exercise in restraint after the glowing reception that greeted American Crime Story’s first season, and perhaps that’s because Murphy is just so damn prolific, with not one, but two prestige television series in the same year. This moody, menacing drama is absolutely worth watching, we must insist; The Assassination of Gianni Versace transcends its sensationalist (and homophobic) true crime origin material to immerse the viewer in a nuanced view of the pressures and iniquities of 90s era gay life. Darren Criss delivers a tour-de-force performance as serial killer Andrew Cunanan, emphasizing the Ripley-like qualities of Cunanan’s character, and Tom Rob Smith injects the series with the mystery expertise of a professional crime writer, for a series rich in both text and subtext.


The New Yorker wrote:
My Not-Top-Ten Television List: The Best TV Shows of 2018

Disclaimer: I was on set for this show, to write about Ryan Murphy, so, naturally, I’m going to be biased. The backward chronology only semi-worked—and a lot of viewers I know dropped out after the kinky ultra-violence early on. But Darren Criss is mind-bendingly good, at once empathetic and damning, as Andrew Cunanan. And, truly, I’ve thought about this show more than almost any show this year: it taught me a lot about a time that I lived through and thought I understood.

Added a few more congrats from friends.  These are via ipwarn--thank you, ipwarn! 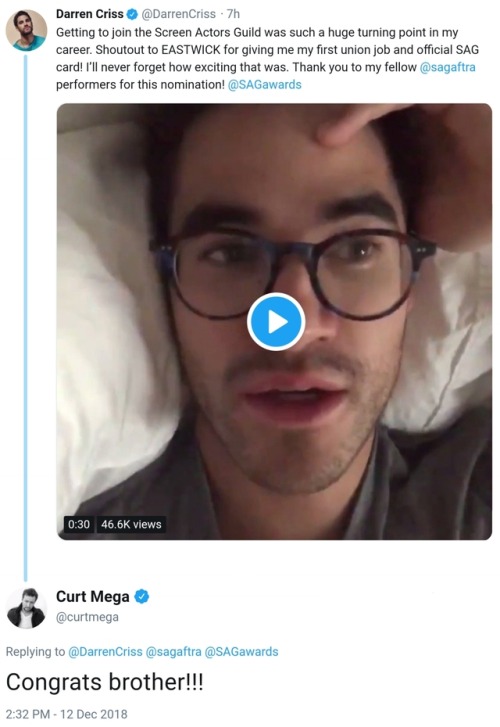 ipwarn's tags are so funny.

Info on when you can watch the SAG Awards:

CONGRATS to FilAm Actor @DarrenCriss on his SAG Nomination!!

Big year for Darren Criss, who was nominated for Outstanding Performance by a Male Actor in a Television Movie or Miniseries. The fact that he got to play a Hapa character in “Assassination of Gianni Versace” is huge. #SAGAwards #YearOfTheAsian pic.twitter.com/LMJZK8na3a