Music Award Nomination and Win for “This Time”

Congratulations to Darren, both for his Emmy nomination of "Outstanding Original Music and Lyrics" on July 16, 2015, for "This Time," as well as for "This Time" winning a Hollywood Music in Media Award on November 11, 2015, in the category of "Song-TV Show/Digital Series."

This is what Darren said about his Emmy nomination:

“This is far beyond the realm of what I ever thought the outcome of this song could be. . . I was just so happy to have 'This Time' be a part of the episode at all, so to have it recognized at this level alongside my fellow nominees is an honor.  So grateful to Ryan Murphy for giving it a shot, the Anders brothers for giving it life, and to Lea Michele for giving it a voice.  I'm over the moon!"

Emmy Awards are given by the Academy of Television Arts & Sciences.

Winners of a Hollywood Music in Media Award are voted by a diverse group of persons within the music-media industry, including members of the Society of Composers and Lyricists (SCL), the Television Academy, the Academy of Motion Picture Arts and Sciences music branch (AMPAS, which gives out the Oscars), the National Academy of Recording Arts & Sciences (NARAS, which gives out the Grammy Awards) and performing rights organizations, as well as film-music journalists and music executives.


Four of the songs that were nominated for the Emmy Awards in “Outstanding Original Music and Lyrics” also were nominated for the Hollywood Music in Media Award for the category of “Song-TV Show/Digital Series.”  Those four songs were:  “This Time” (Glee), “Girl You Don’t Need Make Up” (Inside Amy Schumer), “Come Join the Murder” (Sons of Anarchy), and “Kiss an Old Man” (The Comedians).

In addition “You Gotta Believe” (How Murray Saved Christmas) and “Moving Pictures” (The Oscars) were nominated for the Emmy Award in “Outstanding Original Music and Lyrics.”    “Good Enough” (Empire) and “When I Go” (Suits) were nominated for a Hollywood Music in Media Award in the category of “Song-TV Show/Digital Series.”

Guest
Great stuff! Well deserved! This Time is gorgeous!! He is such a talented song writer and combined with Lea's voice, this is just perfection.  He'd write such a good album.....hint...hint Darren if you ever stumble across this....

dusty wrote:Great stuff! Well deserved! This Time is gorgeous!! He is such a talented song writer and combined with Lea's voice, this is just perfection.  He'd write such a good album.....hint...hint Darren if you ever stumble across this....

I love "This Time."  I'm so proud of him.  Yup, a great combination of talent:  Darren's songwriting skills and Lea's voice.   He will write so many lovely songs on his album.

Hopefully, it'll happen sometime in the near future.

dusty wrote:Great stuff! Well deserved! This Time is gorgeous!! He is such a talented song writer and combined with Lea's voice, this is just perfection.  He'd write such a good album.....hint...hint Darren if you ever stumble across this....

I love "This Time."  I'm so proud of him.  Yup, a great combination of talent:  Darren's songwriting skills and Lea's voice.   He will write so many lovely songs on his album.

Hopefully, it'll happen sometime in the near future.

“This Time” by Darren Criss is nominated for an Emmy | Source


Congratulations from the Glee group.

withanaccent wrote:Today marks only two weeks until the finale of the show, and there’s another big milestone to be noted. Tonight will feature a song written by Darren Criss (Blaine Anderson). Criss has two songs being featured in these final few episodes. “Well he’s so talented,” says Co-Executive Producer and Writer on the show, Michael Hitchcock when asked how this came about. “He’s so prolific and he’s so good, and honestly he talked to Ryan Murphy and said ‘Hey I’d love you to consider these’ and Ryan listened to them and just loved them, and one of them was kind of written for everyone and they adopted it to be just for one person. But it turned out beautiful and I was there when they shot it and I burst into tears, it was really great.”

withanaccent wrote:
"
“It’s about time,” adds Glee‘s piano virtuoso, Brad Ellis. “He’s a wonderful writer. You know, everyone knows him as Blaine, as the actor, and he does a tremendous job with that, but he’s something even rarer than a leading man, than a wonderful actor. He’s a really good, careful, intelligent songwriter. And Broadway-esque musicals, musical film, musical television – there’s a shortage of those people that are that smart in the way that they write. So you know, I want all the stardom for him, Broadway stardom and all of that, but I also want to make sure he keeps writing all the time.”

Ellis goes on to say, “The very last thing I was on set for was the filming of the piano playing his song and it hadn’t even been written down, and the woman (Bonnie) who was playing the hands of Lea [Michele], of Rachel, [Darren] was calling out the chords as she was playing it. She sort of listened to the track once and was matching the track, and that was kind of miraculous the composer is like shouting music theory at Bonnie who is getting it right and playing while they film it.”
"
— Brad Ellis on Darren Criss (withanaccent) 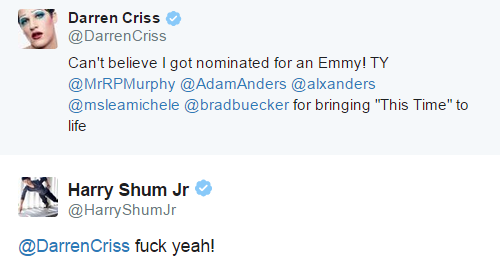 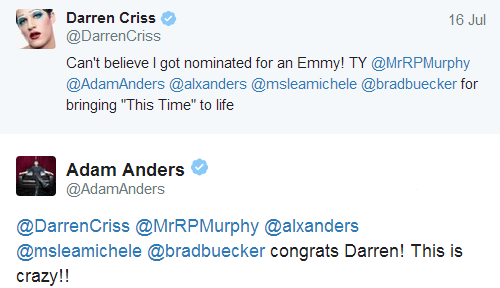 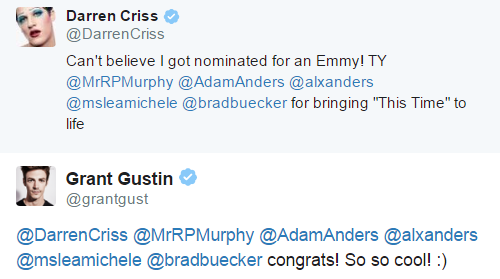 Note:   Many others congratulated Darren.  Of course, St. Ignatius and his U of Michigan and StarKid pals showed their support.  (Of course!)  Broadway-related folks who congratulated Darren include:  Craig Zadan, Neil Meron, Stephen Trask, Matt Duncan from Tits of Clay, Bobby Devlin of Hedwig and the Angry Inch/the Belasco Theater, Andy Mientus, and Benj Pasek.  Congrats from the media include Rae Votta (of course!), Billboard, Caitlin Brody (senior editor at @ew ), and The Broadway Box.


yahoo wrote:
"Glee: For its final season, the former Fox powerhouse generated a single nomination in the Outstanding Original Music and Lyrics category. But there’s a silver lining in that dark cloud: The nomination was the first for cast member Darren Criss, who wrote the touching “This Time” number that, as he told Entertainment Weekly, was intended to serve as a swan song to the show. Mission accomplished."

— Emmy Nominations: 13 Fun Facts You May Have Missed - Yahoo (via bandwagonjumping)

TBT to an interview of Darren about composing "This Time."

Gold Derby Livestream wrote:
"I wrote it like a scene. I very much imagined it, in my delusions of grandeur, that I was basically writing out, you know, I had it plotted out where she would shoot it. I wasn’t going to tell this to the director or any of the writers, you know, but in my own way I just wanted to formulate it so that it had its own shot set up. And as a result, when I heard the whole thing, I was like ‘Oh, this is going to work great, but this is way too long for television. I’m going to have to cut this.’ And I looked at it and I just couldn’t do it. I couldn’t look at anything, because there was a version that was verse, chorus, and then out, and all the meat is in the second verse. So, I was like we can’t get rid of that. And I was like am I just getting up my own ass? Am I just being an overly protective writer? That’s a very typical tragedy: we get so attached to things. And so I didn’t want that to be the case. I wanted to be open to the idea of cutting things. So, after we shot it, I think they saw what was really hitting Lea and what was hitting us in the room. I really humbly, you know, just on bended knee, asked our directors and producers, ‘if you can find anywhere in your heart to keep things, because again, this is no vanity here, I just think if you cut certain parts (I like had it highlighted), if you cut certain parts, just cut the whole thing. You know, there’s no point. This song has no value anymore if you just decide to chop it up for time. I’d rather it not be in there at all if you need to cut the second verse or this.’ Ryan kept a significant chunk of it and the stuff that we cut is more extraneous stuff that’s more musical than it is lyrical content. To me, that whole thing was lyrical and that’s why it hits us or hits the episode in the way it does."
— Darren Criss, Golden Derby Emmy Livestream  (via lovetheblazer)

Note:  The link to the video does not seem to work any longer. 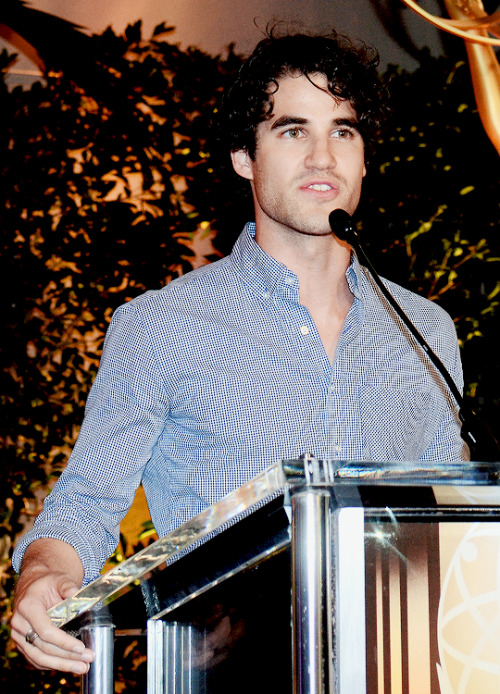 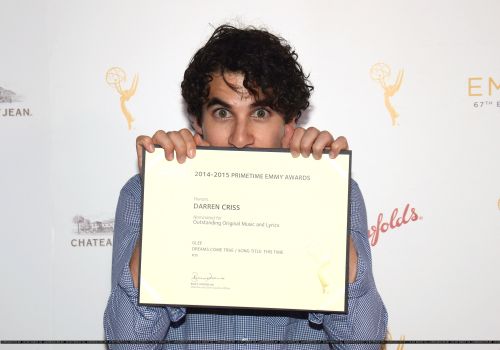 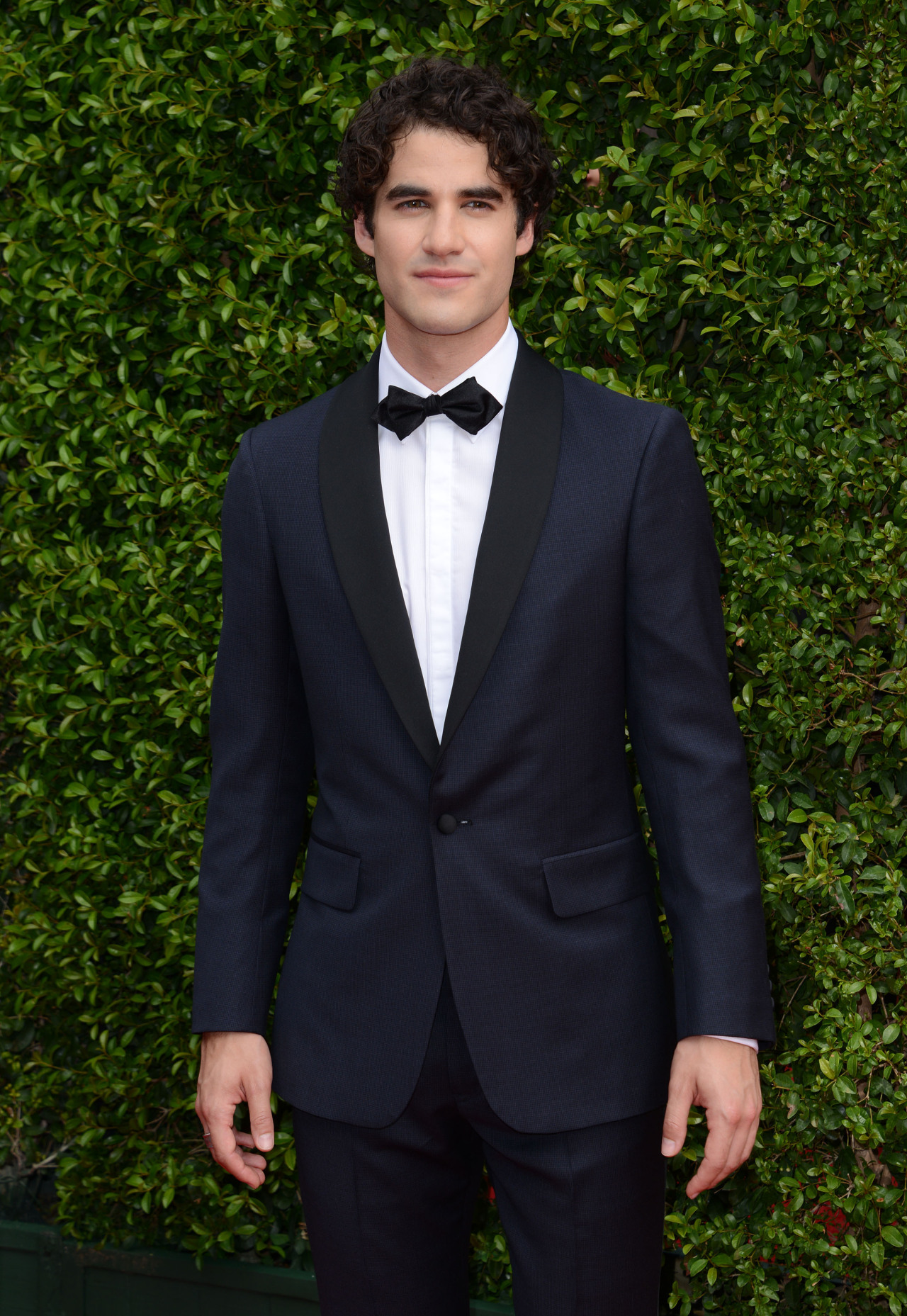 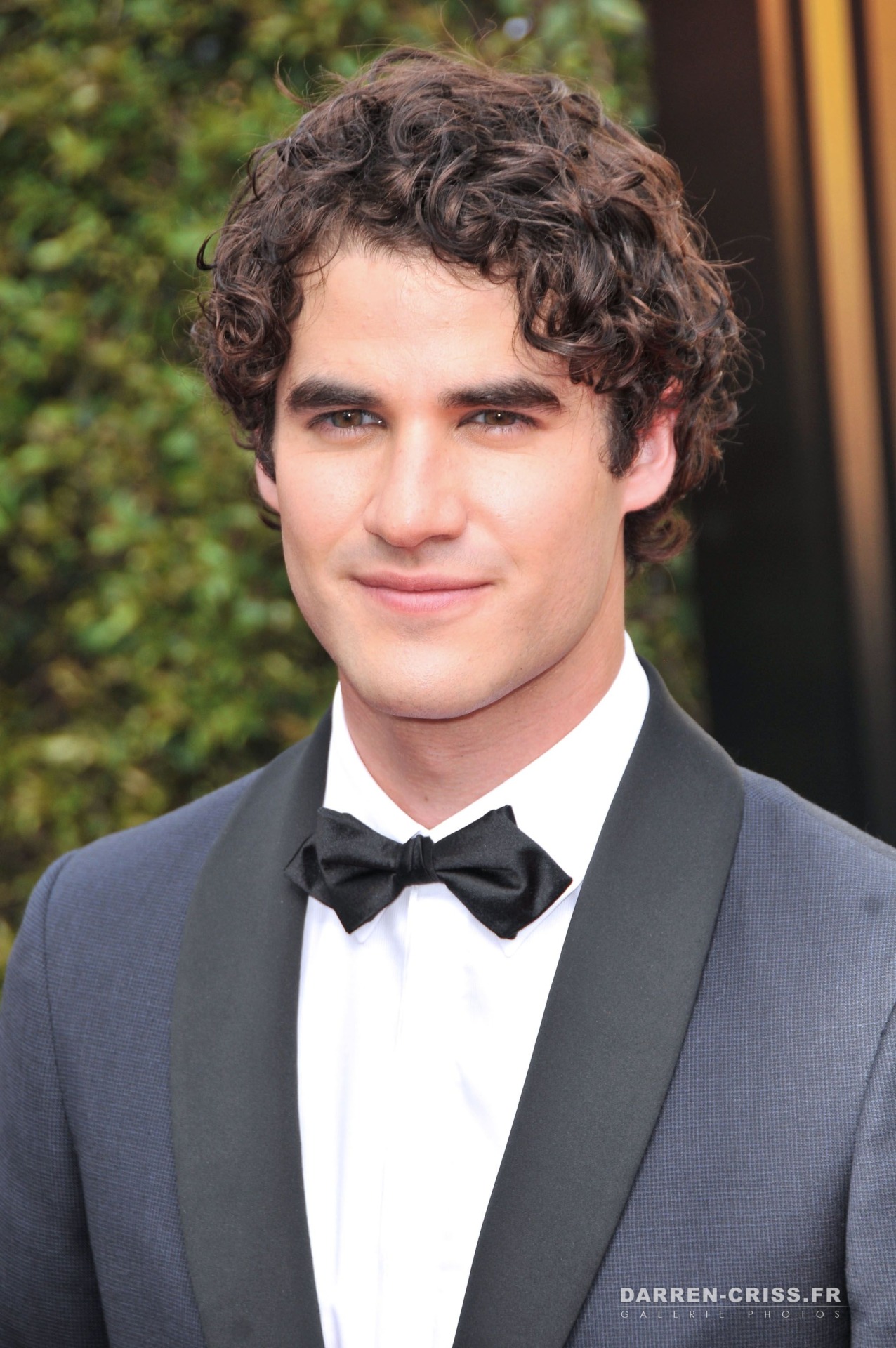 Re: Music Award Nomination and Win for “This Time”